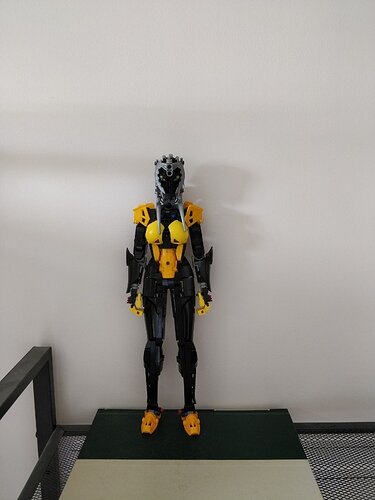 Please let me know (as specifically as possible) what I need to improve on, whether it be anatomy, proportions, color, piece usage, etc.

Please let me know (as specifically as possible)

Nothing. Nothing at all. Except maybe the red grills on the hands. They don’t fit the color scheme, but it’s a very subtle thing.

Ah yes, I didn’t think anyone would notice that.

Eh. I’m a details man. I don’t think most people will.

Of course, now that I’ve mentioned it everyone will notice. Sorry

This seems really proportional. Not bad.

This seems really proportional. Not bad.

How can make it great?

I mean it is great.

How can make it great?

For starters, she’s very skinny, beyond even idealized female proportions. I’d suggest you try to make her shorter - maybe the height of 4 or 5 bricks - to balance out the proportions. I really like the shaping of those thighs, so don’t cut it so much that you have to ruin those, but the shins you could probably improve the shaping of (bottom half) while shortening it.

Obviously if that level of unsettling skinniness was intentional, ignore that comment (except the part about shaping on the shins.)

On to the torso. You actually managed to pull off the look of how breasts sag, which isn’t something I expected out of a MOC. However, they are a different color than the other yellow pieces on her torso, which makes them seem out of place. And although you pulled it off well, I still get flashbacks to amateurish MOCers who throw Nuvaboobs on MOCs without shaping the torso around them. If you have Nuva shoulders in a different color, you could put those in there and introduce the color elsewhere - since you only have a few colors that aren’t that vibrant, adding in a tertiary could add a lot.

Also those Slizer feet in the torso look flat from that angle, and stick out due to their color. I’d advise replacing them with black or using a different piece.

The arms are the weak point IMO. The forearms feel exposed with the grey technic that juts out, and the upper arms are pretty square. You might want to redesign those using techniques from the legs. And the feet could just be done the way they are in canisters, whatever effect you’re going for is hijacked by the multicolored and flat technic.

No comments on the head, from what I can see it’s well done.

That’s what I think of this MOC. You’ve got some good stuff in some places, and other places could use some work. Good luck building!

Thank you for your critique. You might be right in that it’s too skinny (in which case the solution would be shorten the legs since I think the torso is of proper size) but the prominence of the yellow around the waist area might make the waist narrower than it is- they eye focuses around the yellow part. I will remedy this and also take out the Slizer feet. I’m thinking of replacing that yellow block below the chest with system pieces with the same yellow color.

The advice about the arms is noted. Do you think it’s enough to replace the grey technic connector with a black one? Or should I try to cover it up? It’s difficult navigating that space.

As for the shins, do you mean that the lower half is too skinny? As in there needs to be a slant on the inside edge rather than a straight line down.

Do you think it’s enough to replace the grey technic connector with a black one? Or should I try to cover it up?

Cover it up if you can, if not, then replacing it with black would make it less noticable. Like I said, the best thing you could do is redo them using shaping techniques from the legs.

As for the shins, do you mean that the lower half is too skinny? As in there needs to be a slant on the inside edge rather than a straight line down.

That’s correct. To be fair, it has some level of slope, on the outside edges at least, but the piece you used - I can’t tell from this angle - also introduces some gaps between it and the rest of the shin.