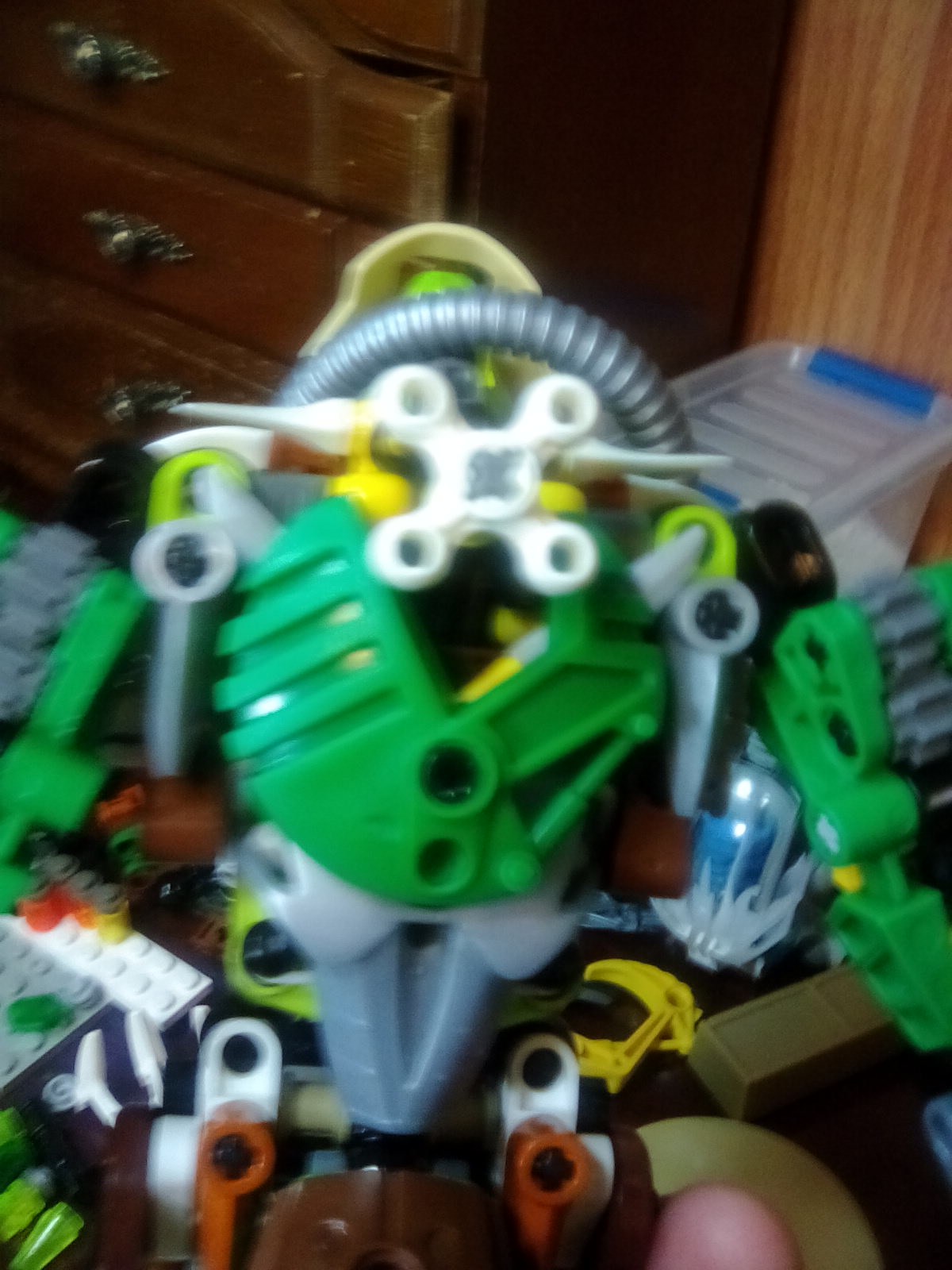 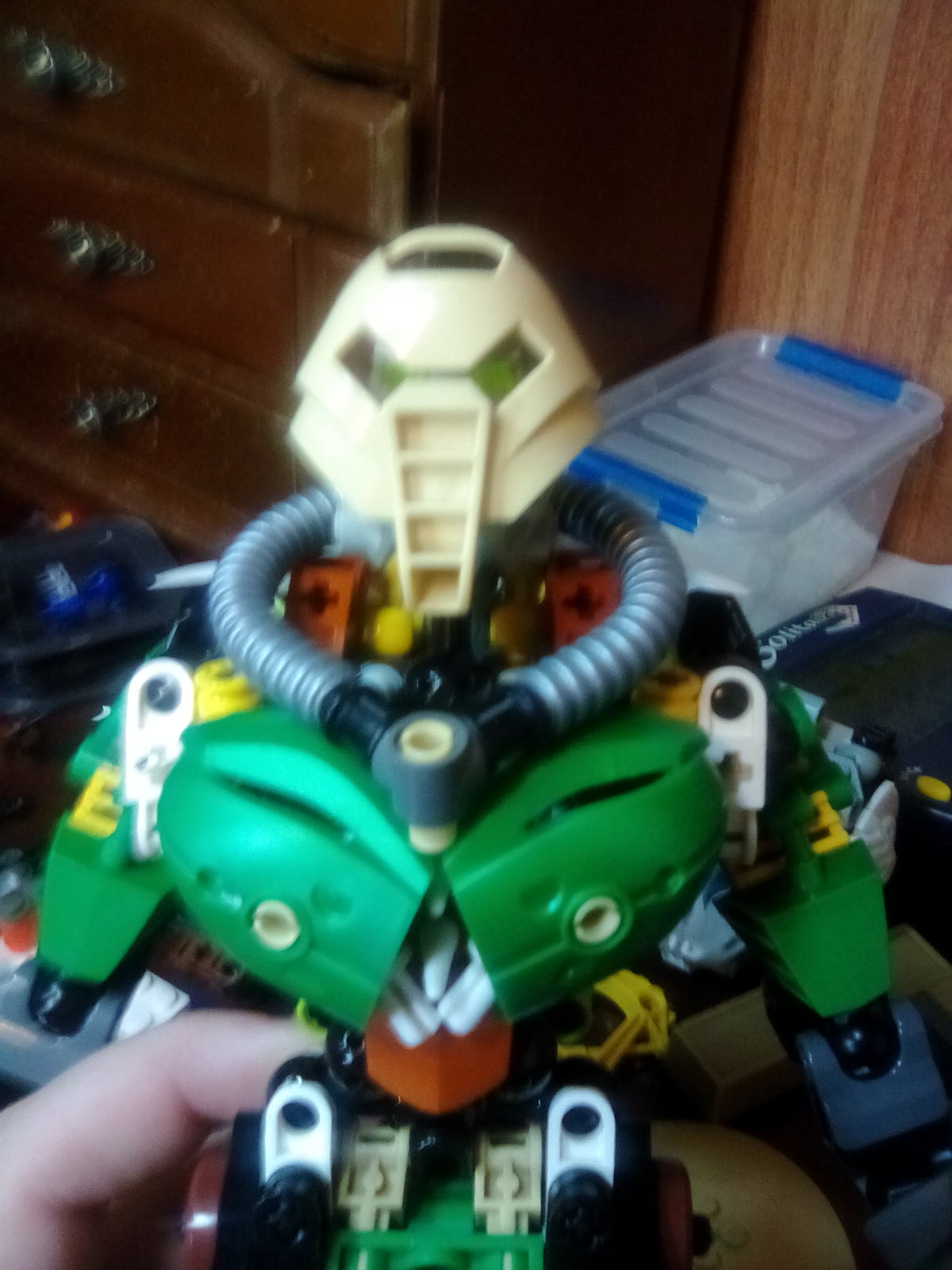 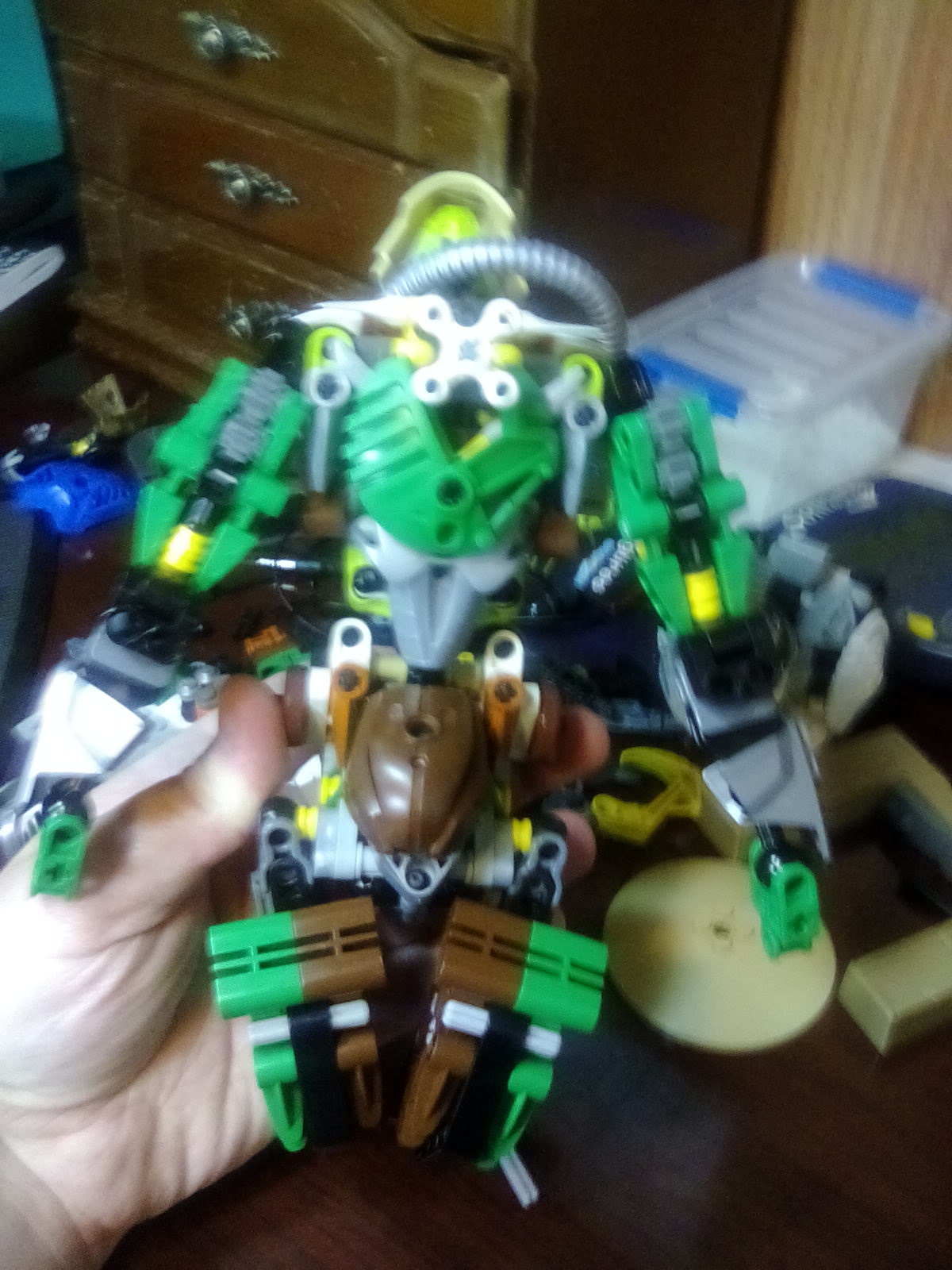 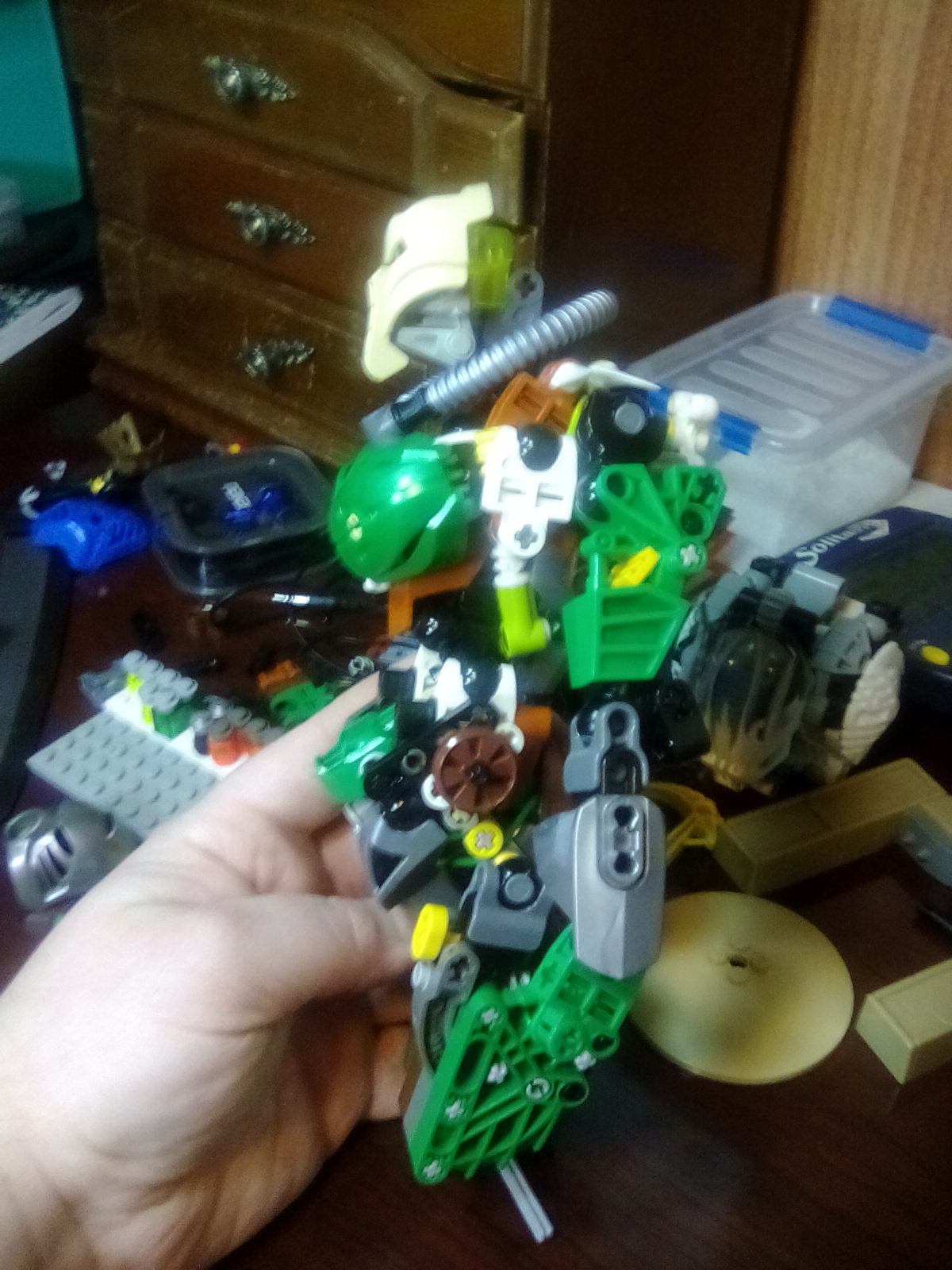 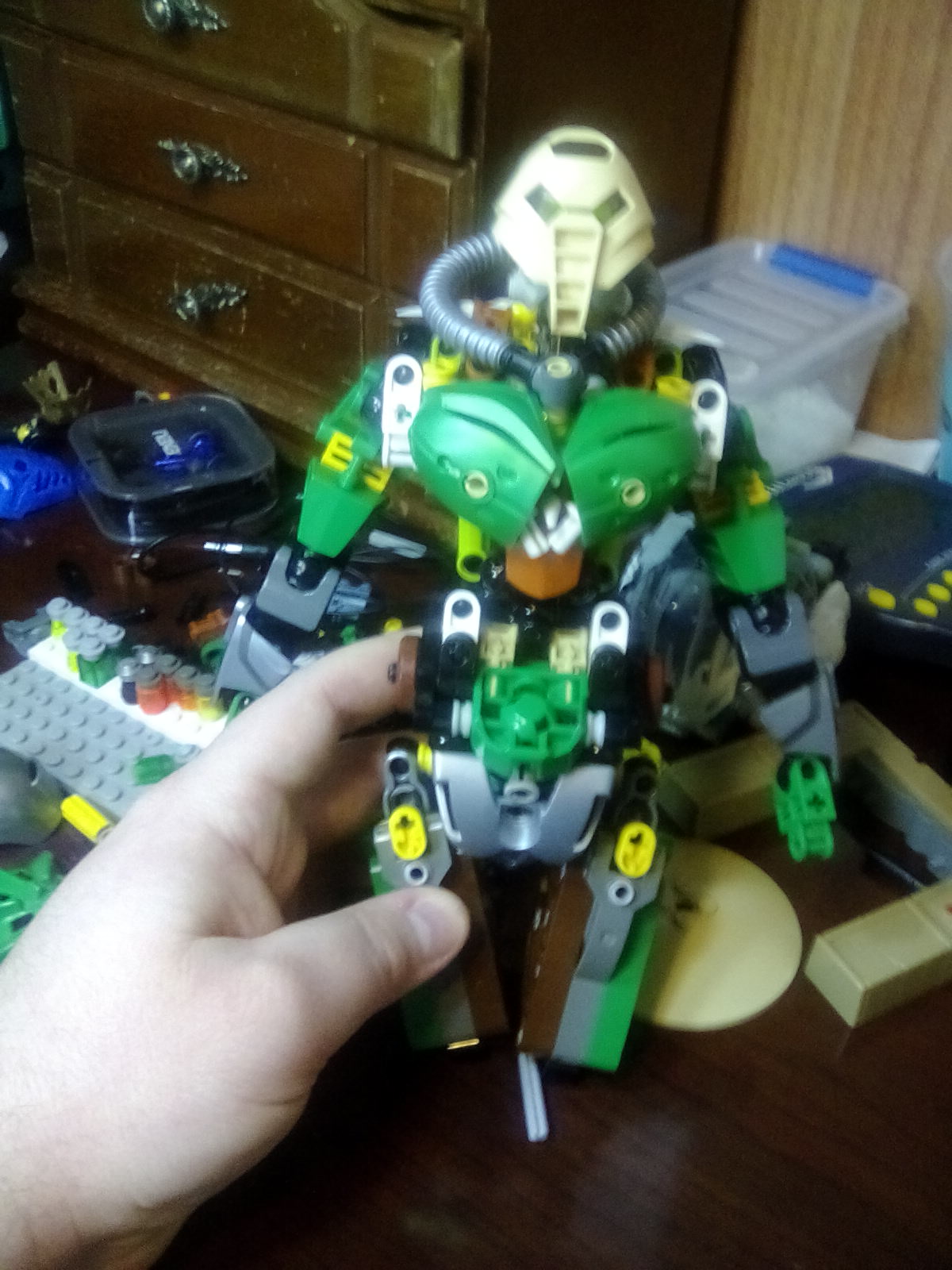 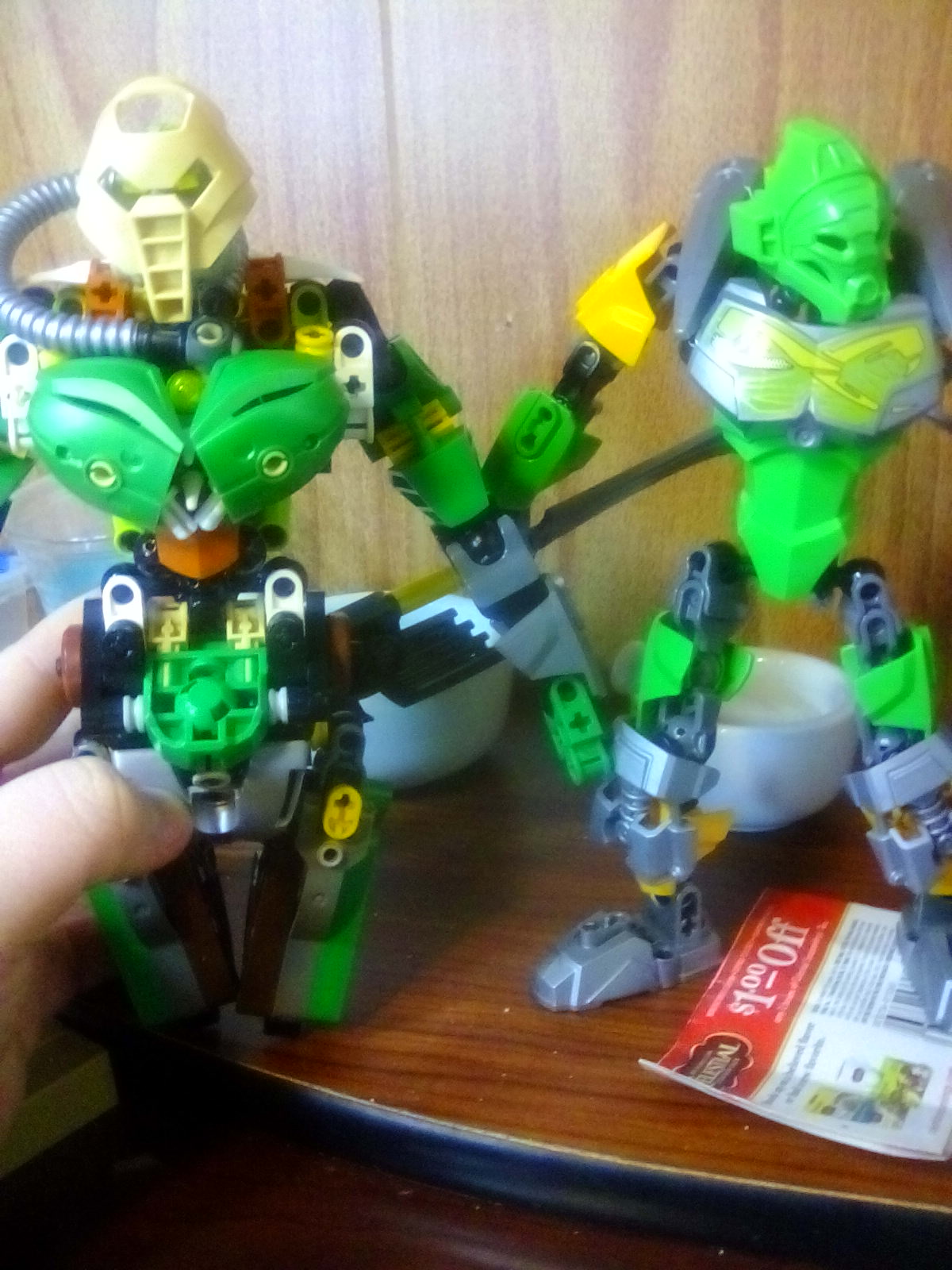 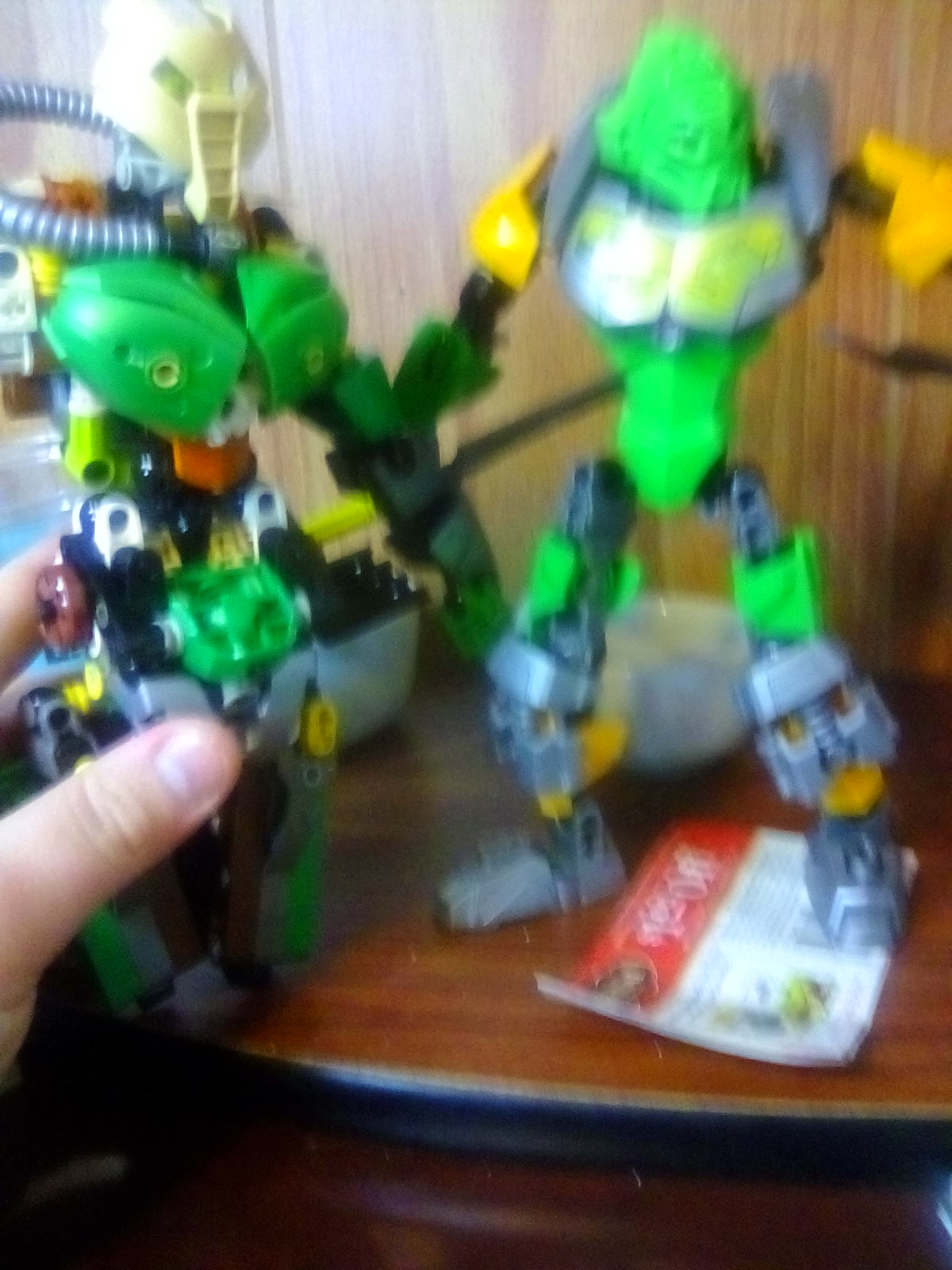 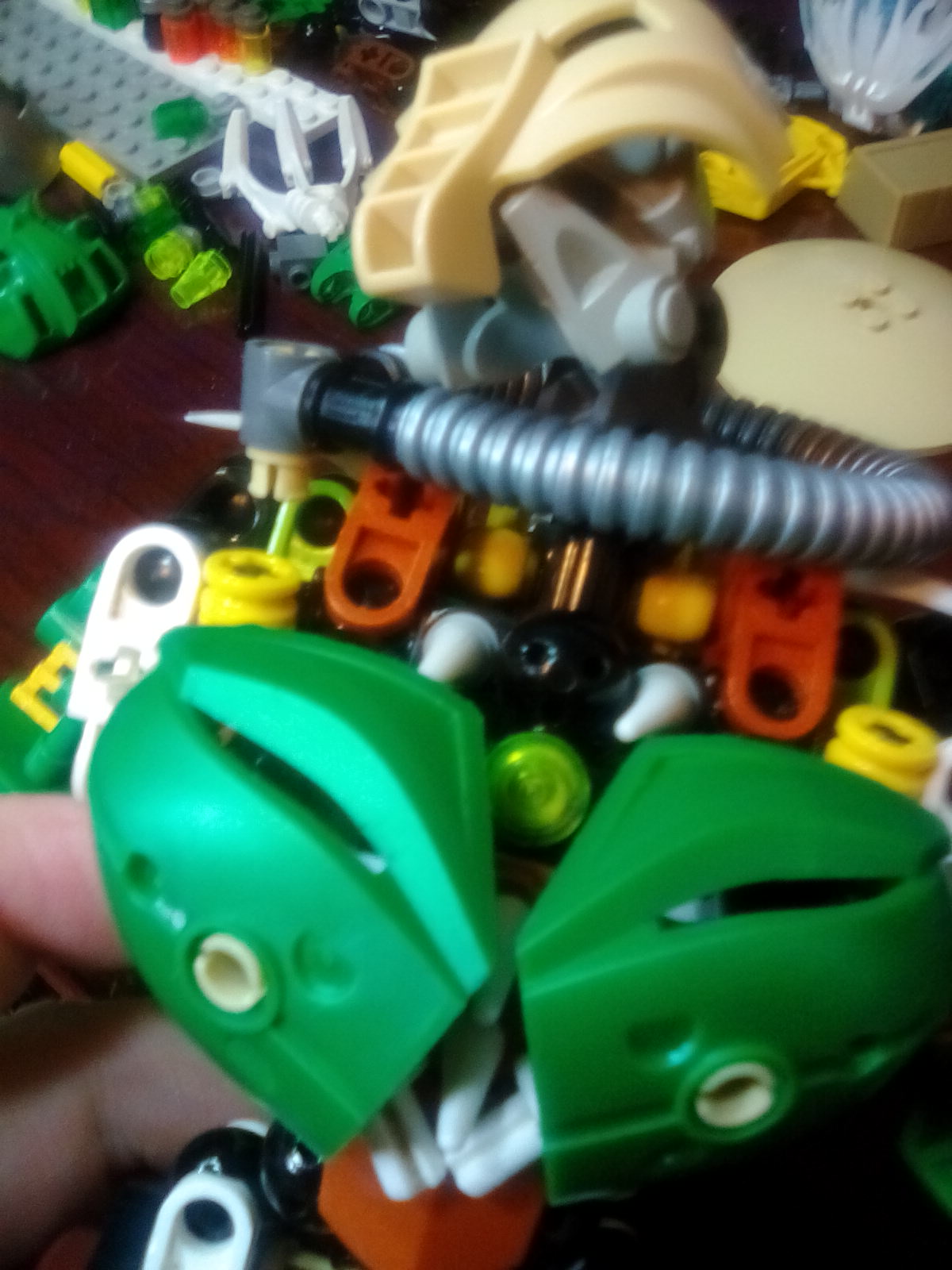 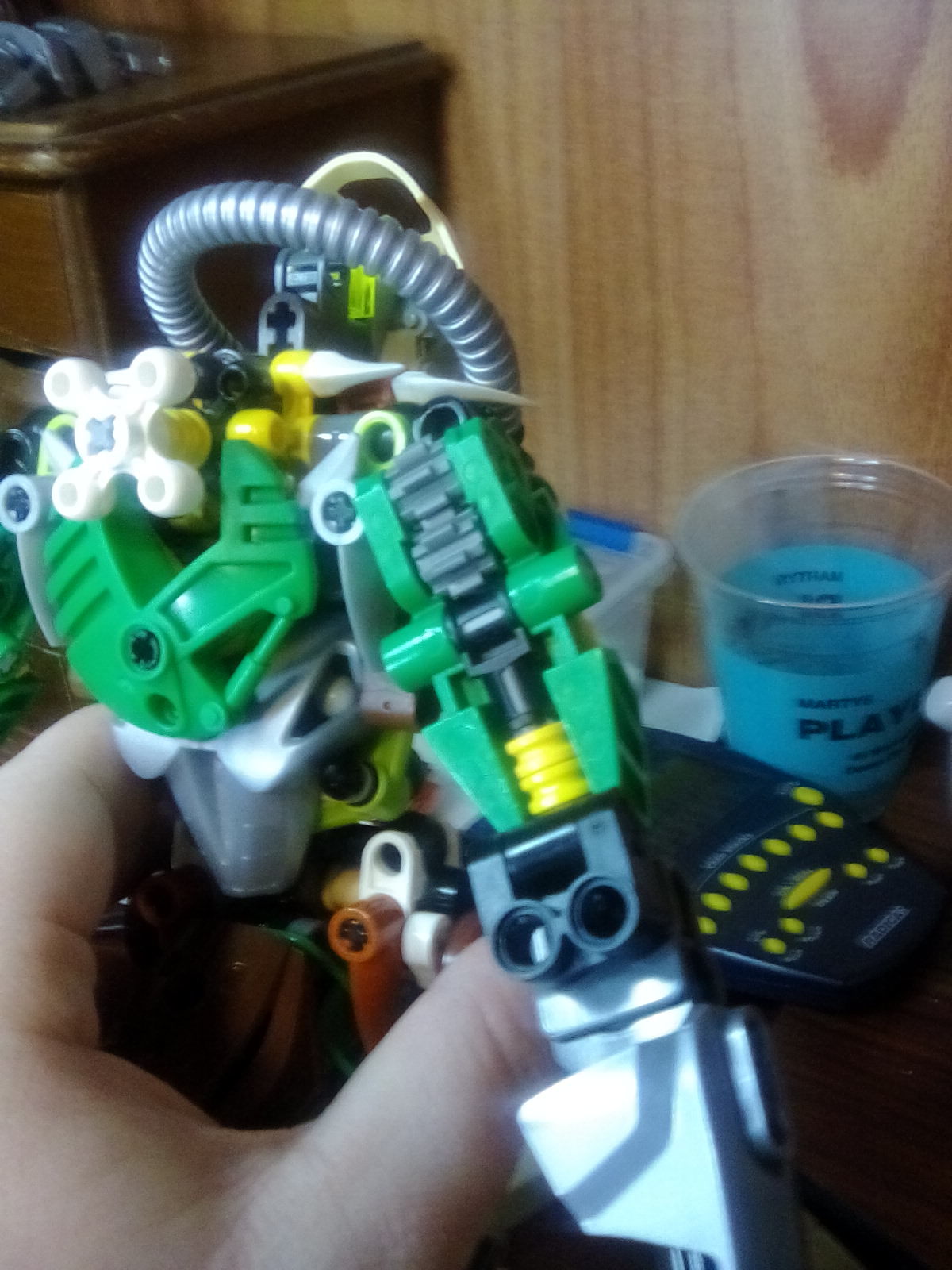 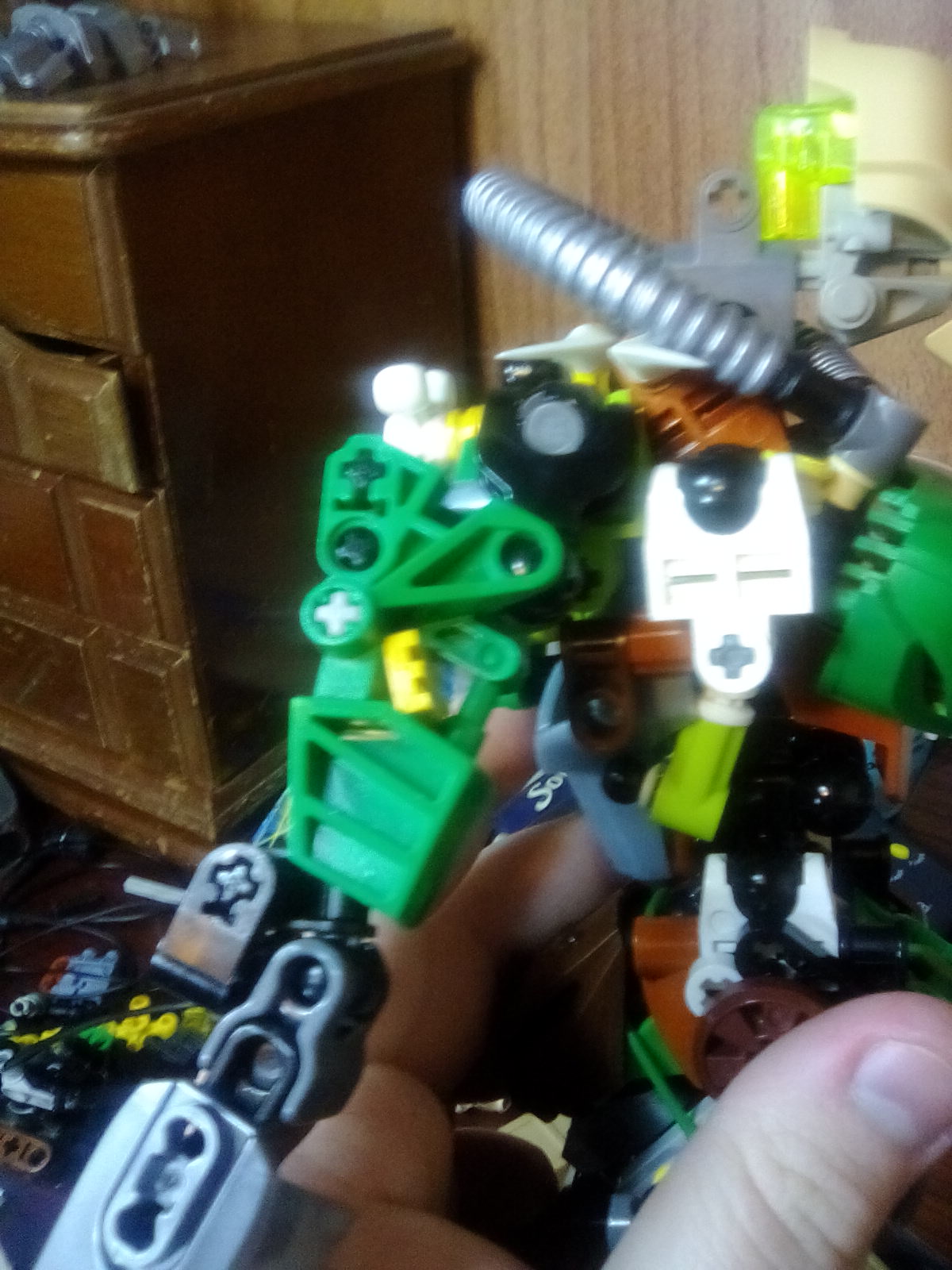 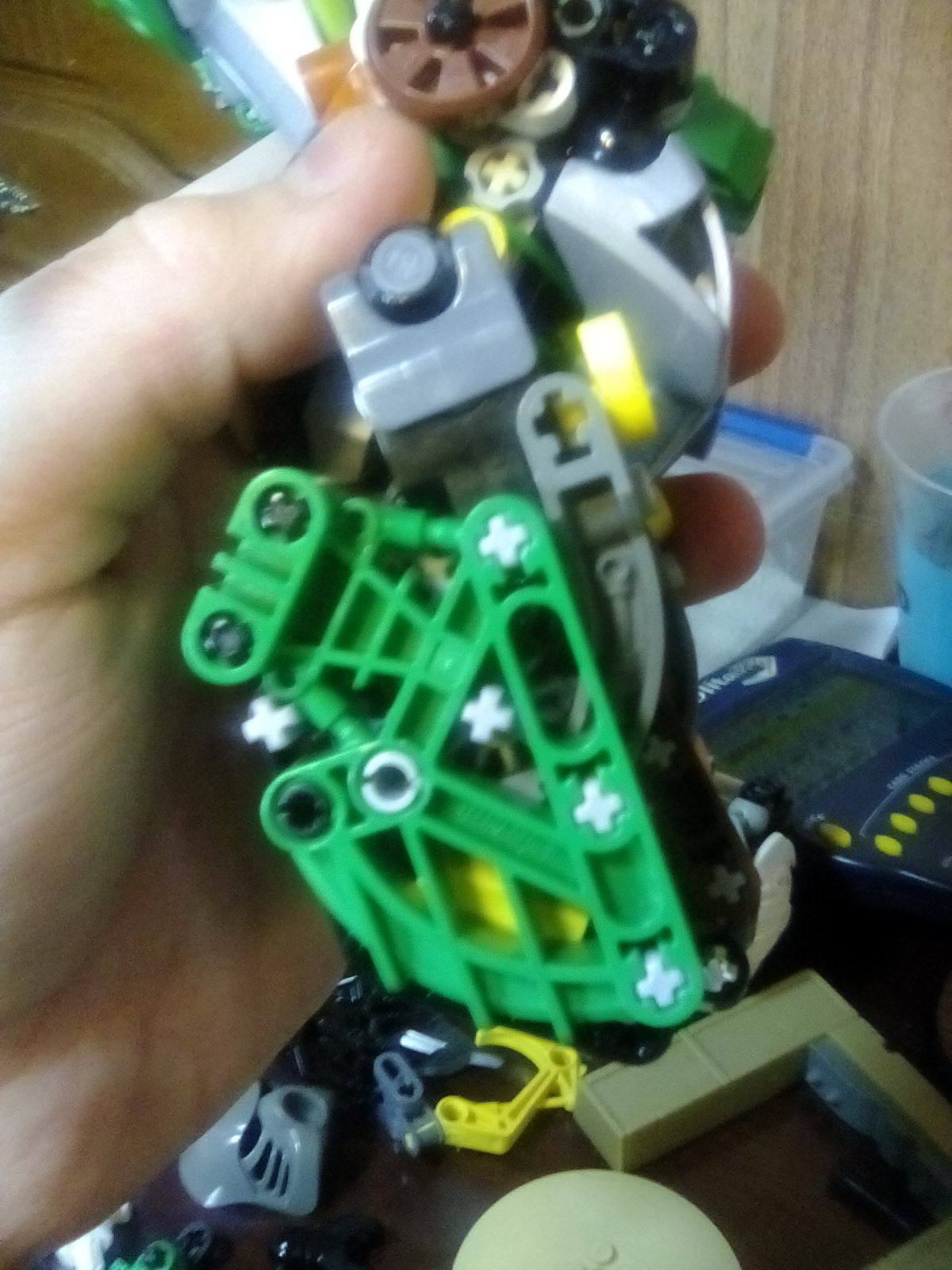 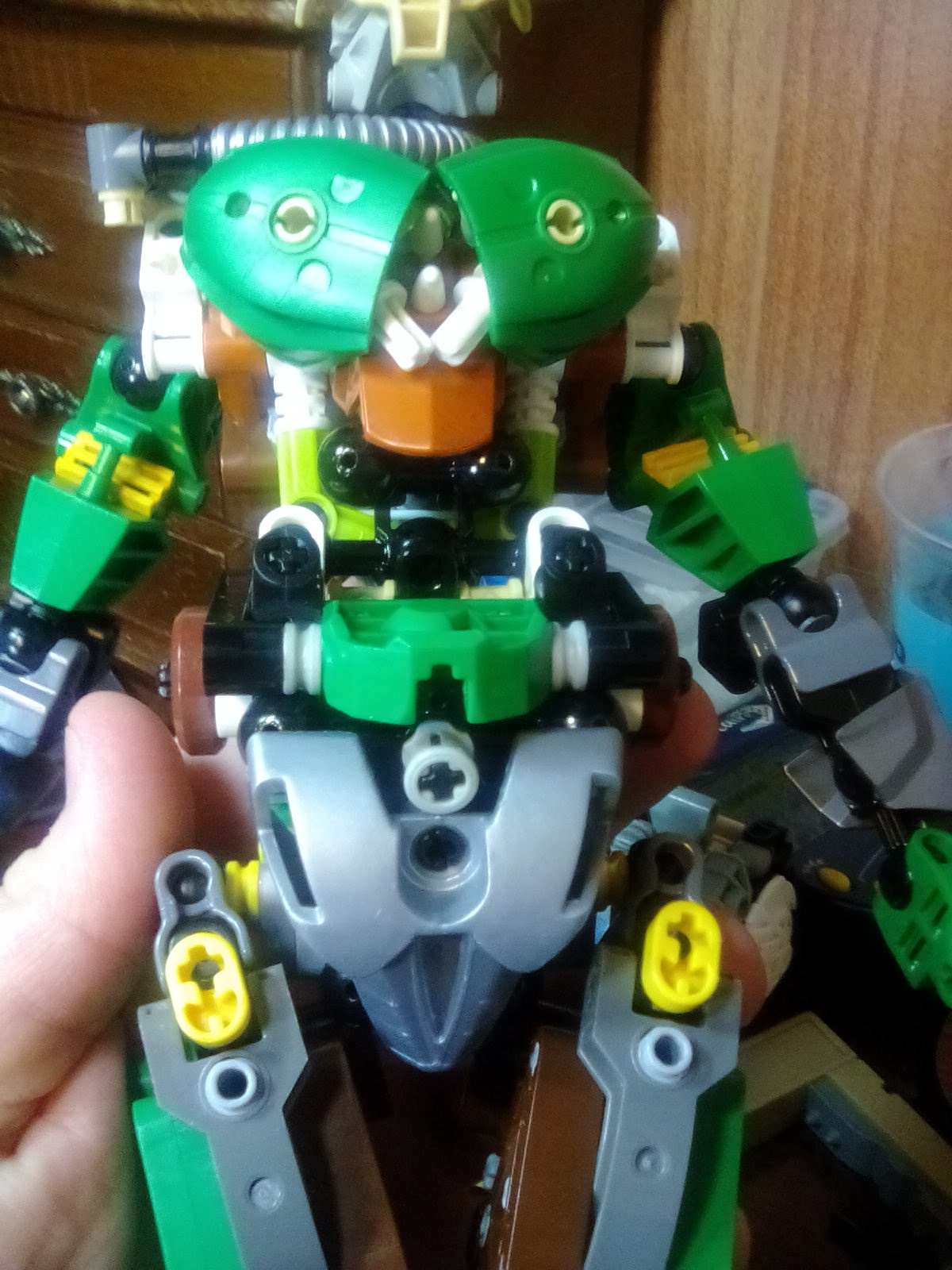 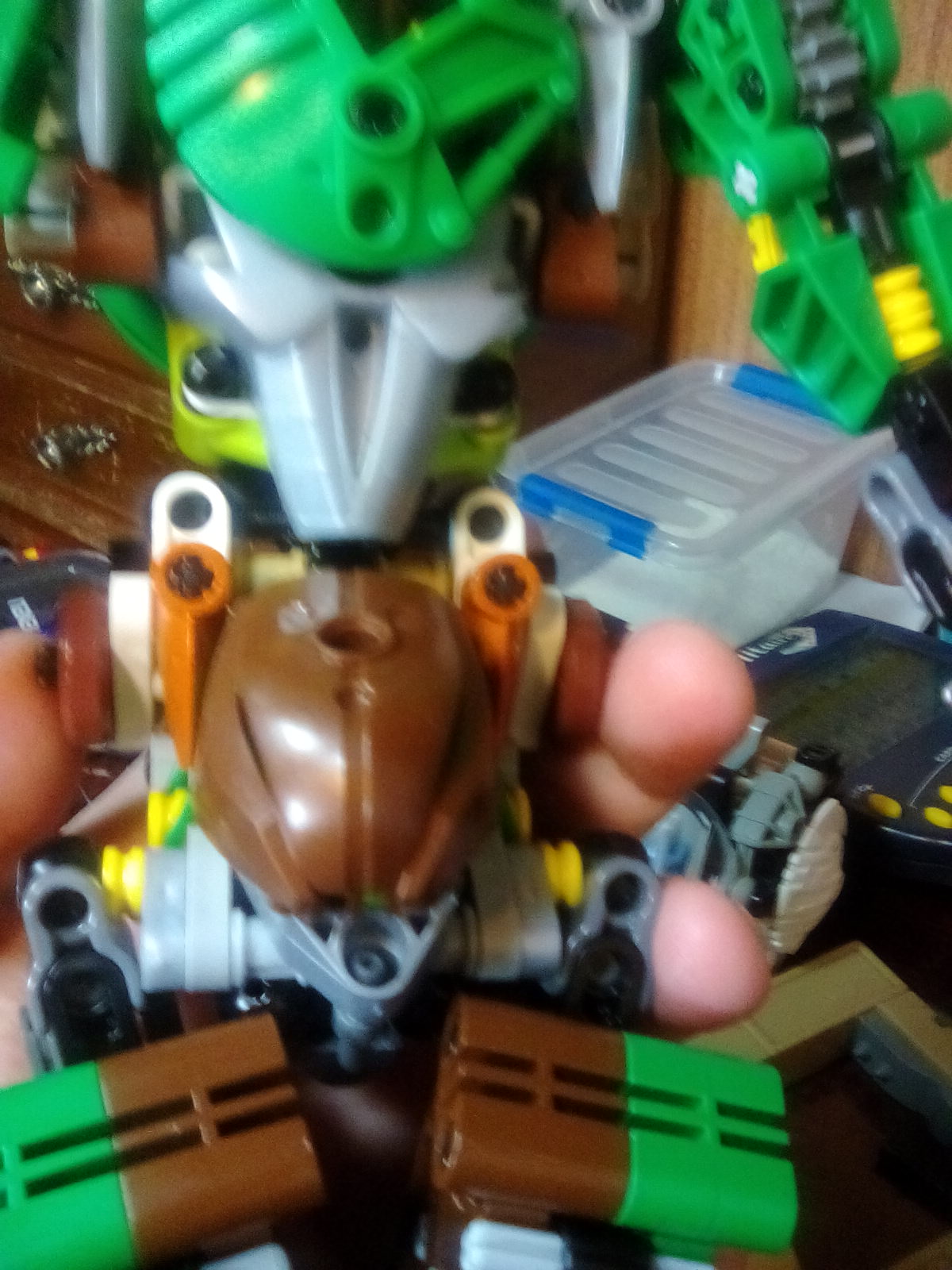 Total Pieces: 252 (Not including mask)

This is technically a finished moc, since there is currently no solution to constructing the knees.

I've been working on this as a self moc for almost a year now, being incredibly careful with how it's built and what pieces to use. She has gone through many, MANY small iterations where I've rebuilt different sections that over time looked less appealing or other reasons. Her name is actually more of a recent change.

She is an Atua, a weaker form of a Great Being which closer resembles a Toa. Her element is plantlife and nature. While she can't create or destroy like a great being can, she can alter the lines between life and death as she chooses. The kanohi she wears is a powerless great mask of healing.

One thing that might change of the build is the hands. Currently, they are Y joints, but I would like to exchange them for the three-fingered claw pieces if possible.

She is modeled after myself, both in personality, appearance, and abilities. I gave her a close shaman appearance to the best of my abilities, no cloth available sadly.

Again, consider this build finished, as there is no current solution to creating the knees.

Looks nice, but those legs are a little short

it is a bit blurry

Yes, I know. They're actually just the hips. No lower legs since no knees.

My tablet takes worse pictures than my small phone.

Think I saw it on tumblr before

Yes, I posted some of the early iterations on tumblr here and there. It's changed a lot.

Yes, but I have it locked with a ball pin because I don't want the joints to wear down.

Kare is non violent, so I made it optional to have the gearbox function or not.

The arms are a bit basic, but other than that, great job

Looks great.
Does she have more leg length, though?

Thank you. I struggled with the arms for a while, trying to find a compromise. Eventually I came to the current build. I then had to shorten the gearbox axel length from size five to size four.

Eventually planned, yes. The knees need to be figured out first. The axel hole is at an X orientation.

If this isn't finished, you might want to put it up as a WIP.

Okay. I will then

The hip area feels kinda, overdesigned, or cluttered, like it needs to be streamlined, honestly I think the shoulders are kinda cluttered too, I do really like the arms though.

I don't think it counts as WIP if you arent going to update it (I am assuming that because you stated to consider the build finished). The build is intuitive and well done in a lot of areas but I feel like the mask doesn't fit a female character.

Thank you. There's always a chance I'll rebuild the limbs. I've gotten myself into the mindset where I should never be happy with a build, it motivates me to constantly improve my mocs over time.

umm and yea can you get the green, or copper, or white version of this mask ( instead of tan )

Not bad. Cluttered, but I can certainly see some decent shaping at work.

Perhaps you're overthinking the thighs a bit?

I'm fine with the colors. The mask color as well. Shamans have less uniform color schemes than what everyone is familiar with.

Thank you! I'm very familiar with the color scheme, so I know how to get it right.

Thank you! And wow, that definitely is a better build. Am I allowed to use that?

Thank you! And wow, that definitely is a better build. Am I allowed to use that?