As requested, I gave him colors! -.- He looks like a toa of Fire now, so…
He looks cool though! 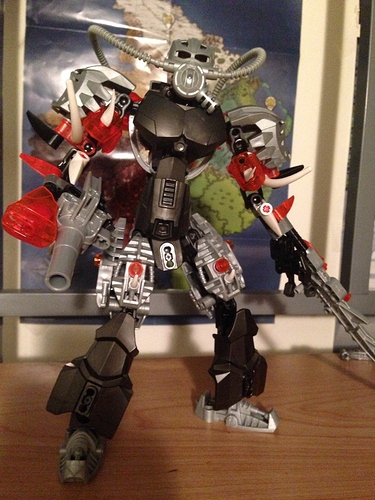 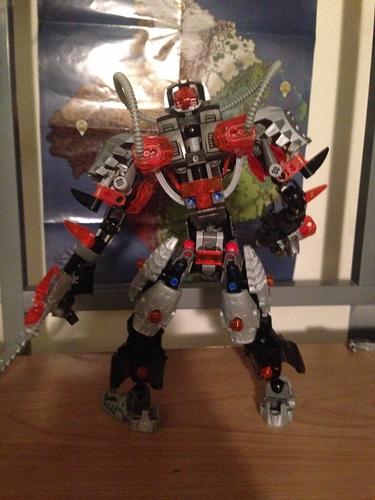 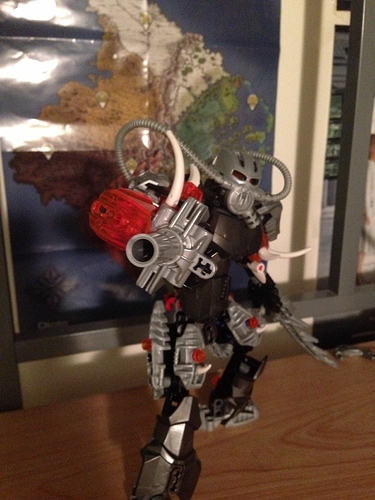 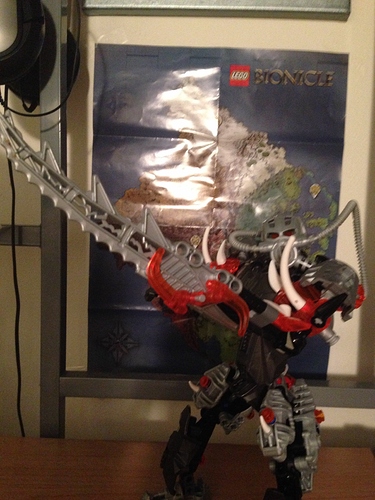 If you want, you can help choose a BETTER element that fits into cannon. If you do, thanks!

Nice! I’m lovin’ the update–the trans-orange is well-dispersed, and gives him an almost “energized” look. I love the claw/propeller thing on the sword.

Maybe Iron would work as an element? Their color-scheme is gunmetal/burnt orange, but I think any kind of orange can fit…

That’s a good idea! I was going for an energized look. I’ll wait for a few more opinions, and I’ll reveal my final descision by renaming the post.

I consider trans pieces to be elemental energy, rather than part of the actual colourscheme.

I think iron would work.

I’d go with Magnetism, because how else could he have snagged a Makuta’s hands for shoulder armor? I think Magnetic power would explain how he carries all that armor and those weapons.

Yop! And another one for the iron clan. XD

I think Magnetic power would explain how he carries all that armor and those weapons.

You make an interesting point, and, canonically speaking, there are no Toa of magnetism left, so he very well could be the last one!

9:00 will be the deadline, and whatever idea I like better will be put into the title of this post!

You were right ,so I fix it! XD 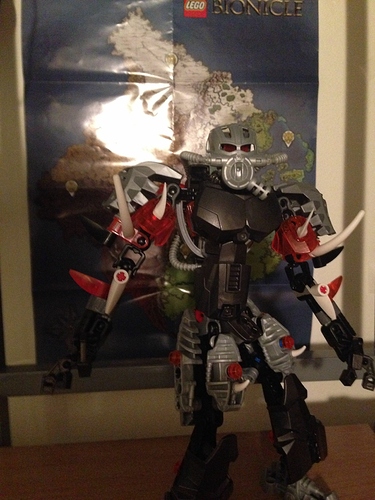 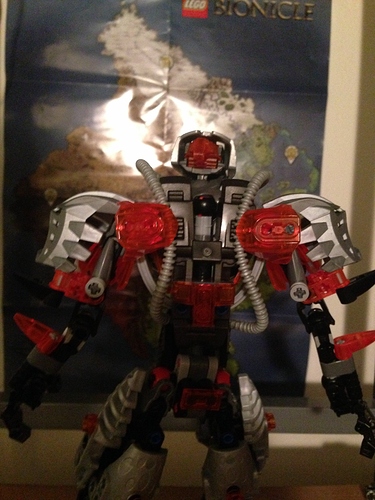 Hey, good choice! I didn’t even think of Magnetism! It definitely fits! Are you going to make a backstory for him? There’s nothing I love more than a MOC with a good story (no pressure, though)

The trans orange needs to be spread out more.

I’m going to keep the premise of the original story, AKA running away from Makuta attacking his village, but this time, it’s going to be a small village, filled with the remaining Fa- Matoran. During the attack, they mostly died out. His village was on the border of Onu and Po Koro. When he ran, he should’ve ran South, to Onu-Koro, as he would be stuck in the deserts of Po-Koro for about four years. Until finally, he emerged as a toa, as in the desert, he found a toa stone! Now, he travels around the island, battling and destroying any Makuta he can find.

Sounds exciting! Are you thinking of actually writing the story out?

I haven’t, actually, but I’ll certainly check it out!

If you want to be introduced to my style of writing, that’s how to do it!

Thanks! There are better pictures of it on the non energized version of the MOC!

This is MUCH better than before.