Hello, all! Inspired by that self-MOC spotlight topic, I’ve decided it’s a good idea to post my self-MOC here finally. Meet KDNX, a Rahkshi of Sonics. 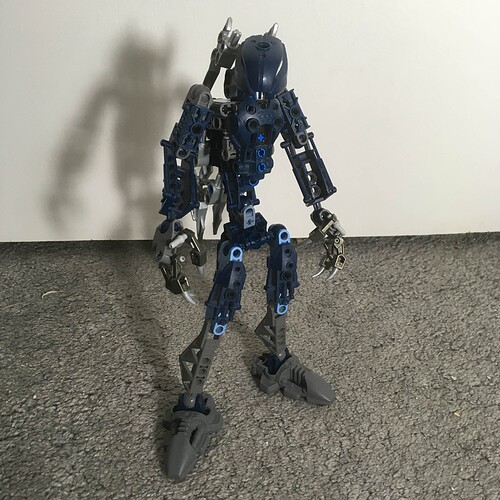 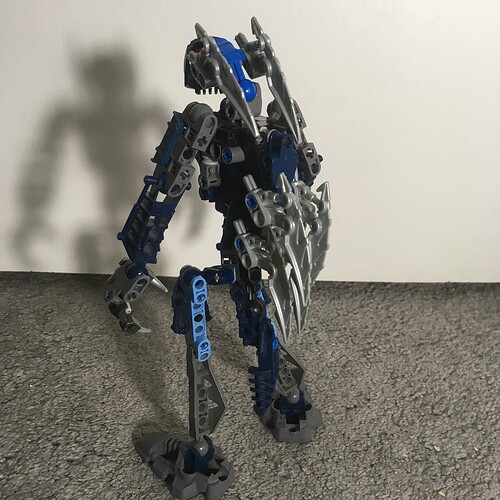 KDNX is their production code, from a system used by their Makuta to uniquely identify each of his Rahkshi. (He was mass-producing them for an offensive maneuver; the effort and continued strain eventually drove him mad.) KDNX quickly developed into a Shadow Kraata after being born, and took on their production code as their name. 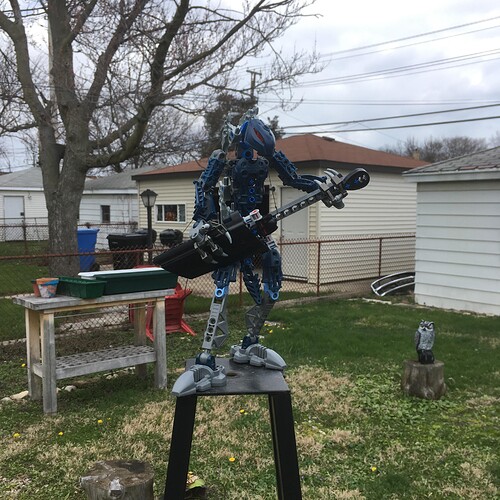 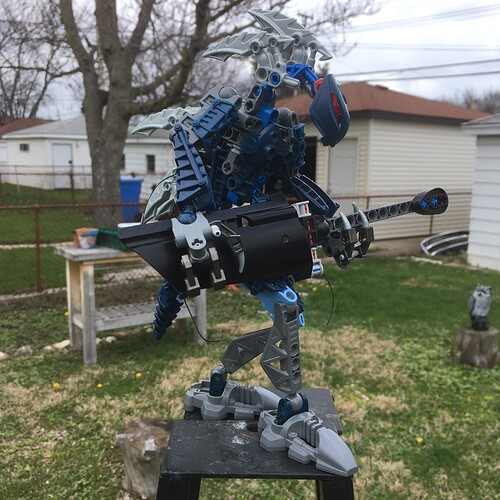 Rather than a staff, KDNX utilizes a guitar, allowing them to concentrate and focus their sonics powers through amplifiers and PA systems that they’re plugged into. 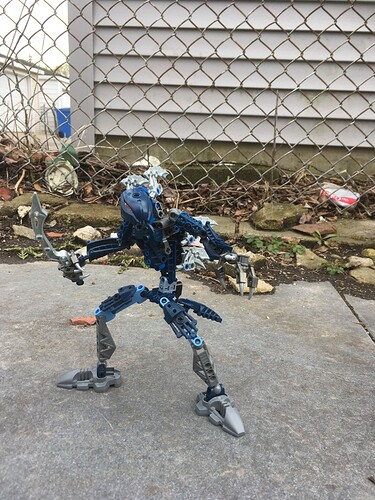 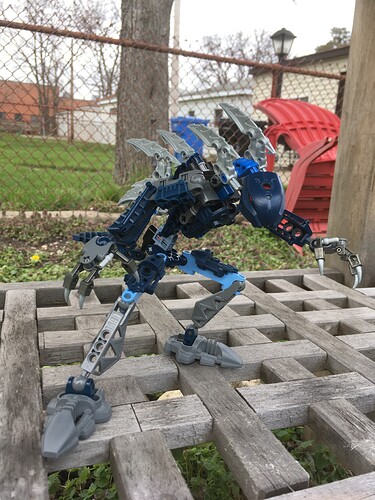 KDNX doesn’t wear the standard colors of a Rahkshi of Sonics. The main reason is that I think the actual colors are ugly as sin, and I wouldn’t use those. (It would also be difficult to use them on a standard, purist MOC - I’ve never painted and I don’t really intend to start.) I suppose that, if I had to give a lore explanation, it’d be that they chose to change their armor colors after developing sapience. KDNX carries a small dagger as a sidearm. (At one point, earlier in the design history of the MOC, this dagger attached to the bottom of the spine as a tail. Today, the vestigial tail does not detach.) 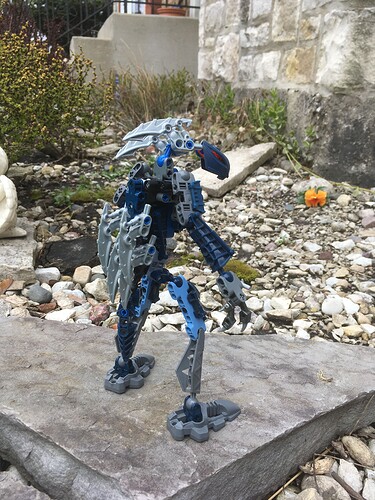 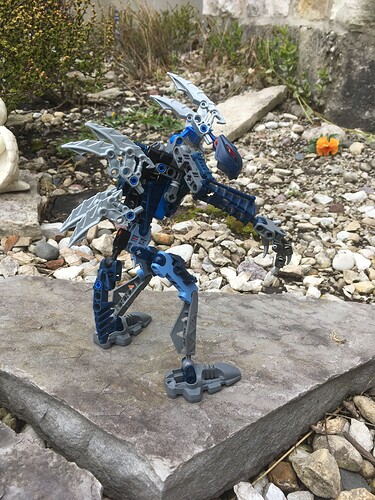 KDNX’s spines are articulated, and they can bristle up or settle down depending on their mood or state of agitation. 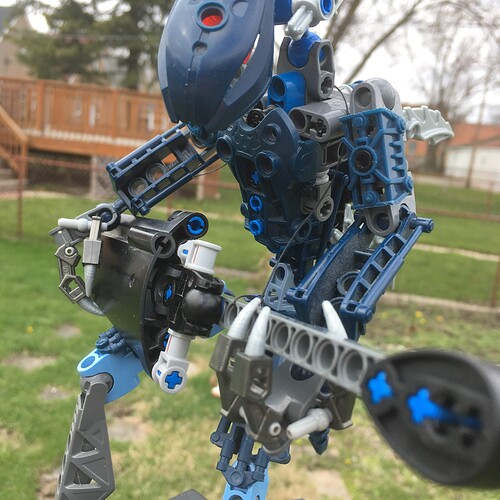 Thank you for checking this topic out! This MOC has spent a long time in the design phase, and I’m still not gonna call it done. I recently, by sheer chance, came across a Kraata of Sonics in a random BIONICLE lot I got from Goodwill, so I’m gonna have to incorporate some kind of holder for that. I also just ordered one of ProneToDrift’s light-up Rahkshi eyes, so that’s incoming as well. You may have seen this MOC before if you’re active on BIONICLE Instagram (Biogram); I used to be more active but I stopped after a combination of disillusionment with the community there and general depression. These are the same pics I posted to Instagram; the MOC has not been changed since then (but will be soon!).

Really nice so far, I like that it uses a guitar for a weapon.

Thank you! I tried to make sure they were dynamic-looking in each shot. I fear what I may need to do to them to incorporate Kraata storage.

Okay, I’ve got the beginnings of a modification to enable Kraata usage built up in Studio. What do we think? 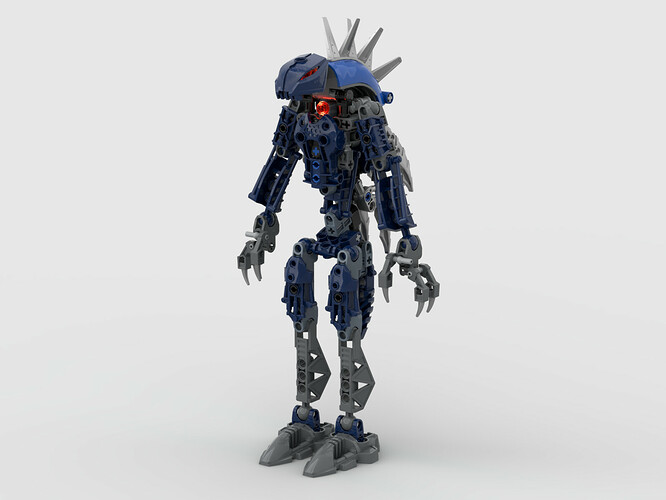 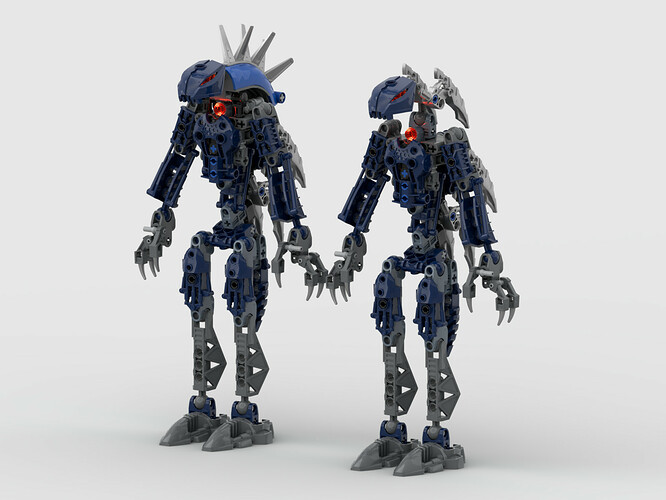 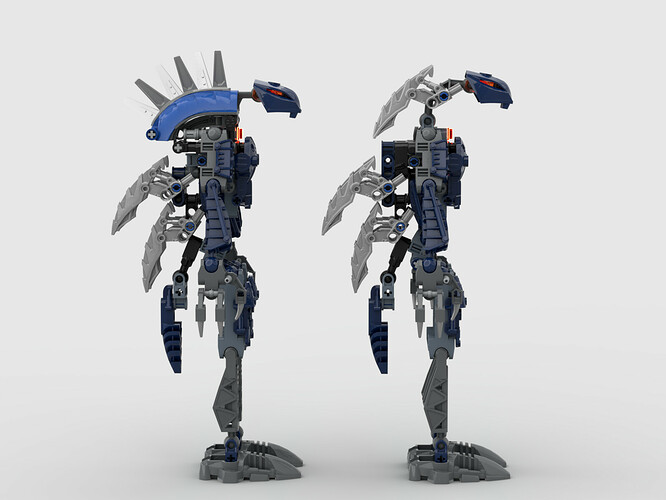 Very nice, but it would be interesting to see it on the back area so the blade pieces can still be on the head.

Oh, trust me, I’ve tried. And tried. I do quite like the wolf-ears and I want to do something about them (maybe even commission a custom headplate), but no matter how I try to configure it against the back, it sticks too far out. 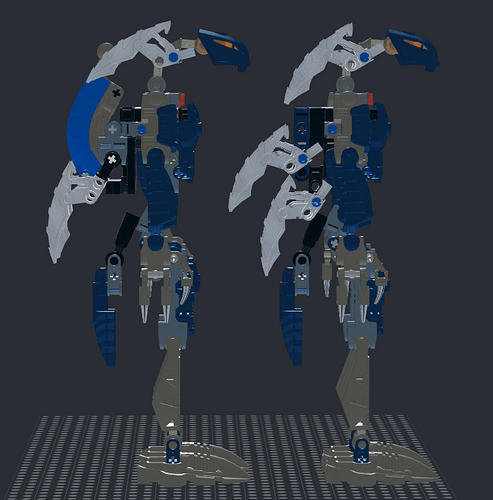 Can’t you make like a custom kraata compartment then?

It’d be interesting to try. This is still digital, so I can totally look into it. That’d likely involve rebuilding the whole torso.

I prefer the original. I’d say that in this case, the aesthetic of the MOC should be prioritized, and sacrificing canonicity is justifiable.

Input appreciated. Edit: the main reason that I wanted to add the Kraata holder was for the challenge, and the fact that my first bulk parts purchase happened to have the contents of exactly one Kraata pack in it, which happened to contain exactly the right Kraata for my MOC. I’m unsure as to which I look better, but I have a second MOC that looks very good with it.

Looking really good though the single bright blue piece among the dark blue pieces does stick out a bit.

Now that ProneToDrift has a sand blue paint match, I may make it that.

EDIT to prevent double post: Drift has been painting some parts, so here are mockups of the two forms this MOC will have in the future. I intend to be able to (somewhat) freely switch between the two forms as I see fit. 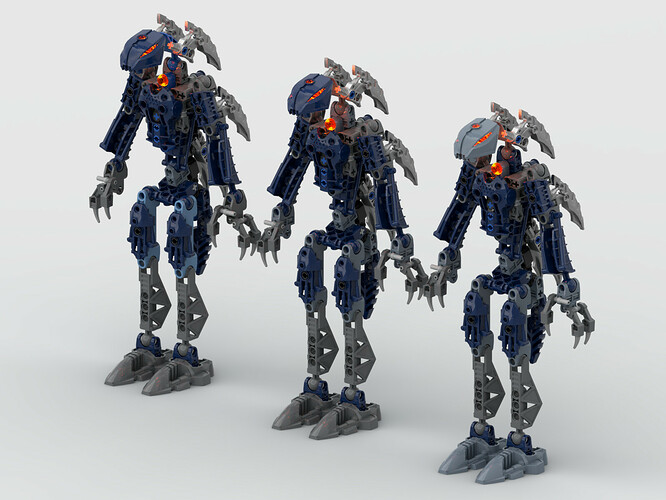 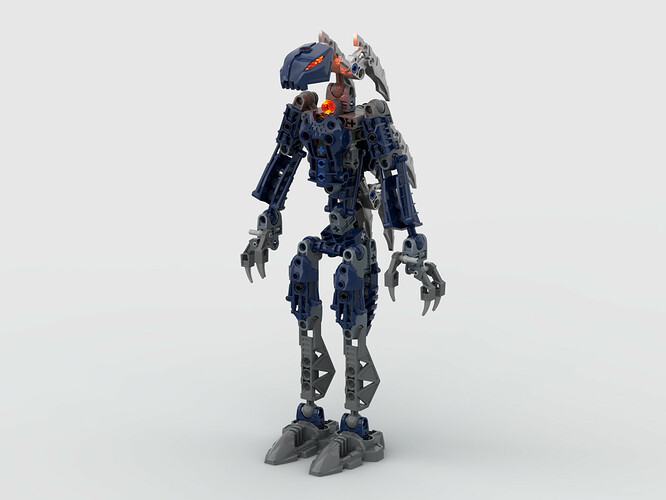 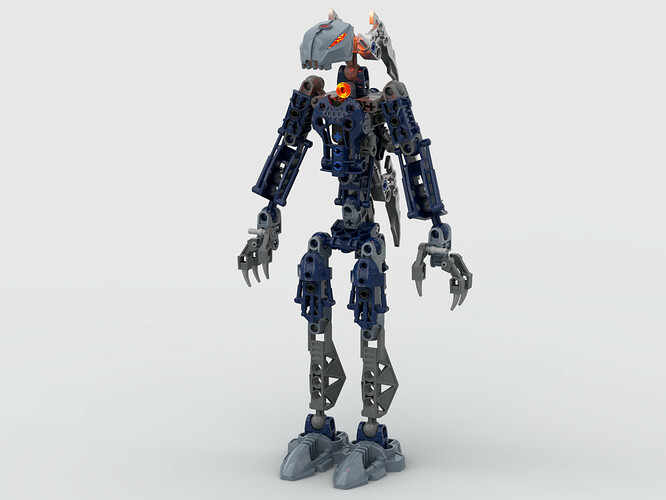 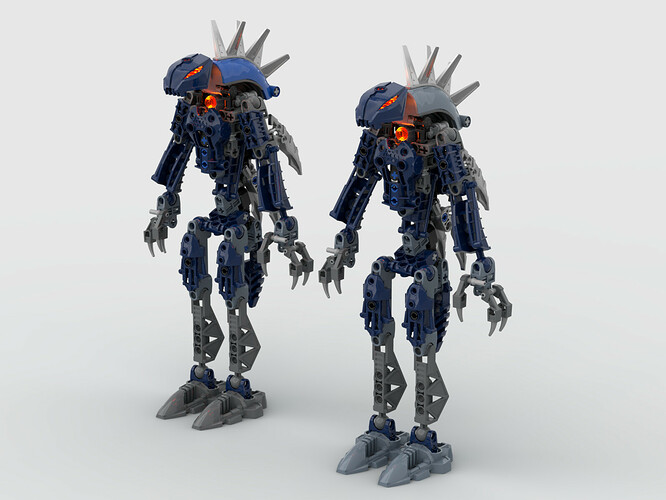 KDNX_81600×1200 221 KB
This is the Kraata holder version, in both purist and painted versions. I’m also thinking about commissioning a Rahkshi head with bar clips on it so I can attach neko ears to this one like the original MOC can do with its articulated spines. 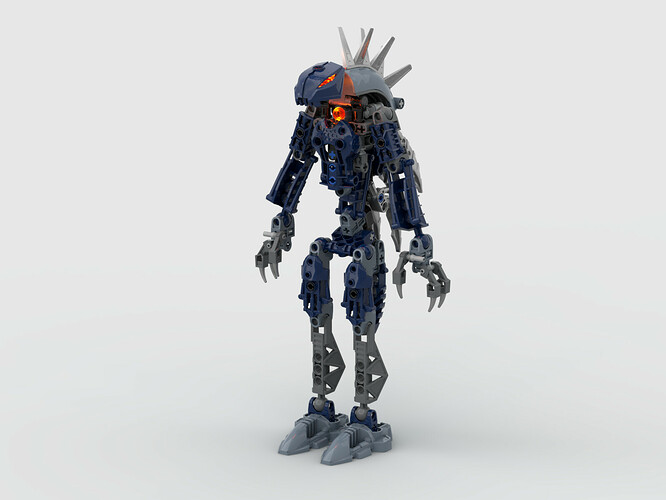 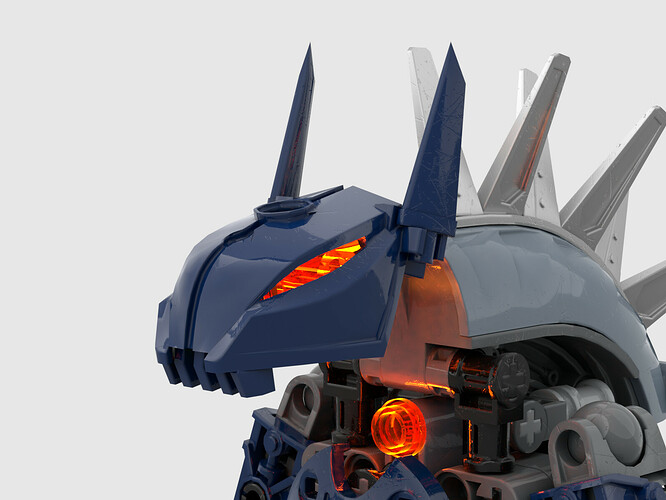 Another edit, darn these double post rules kneecapping my updates: Valtarshol has made me a wonderful piece for this occasion. 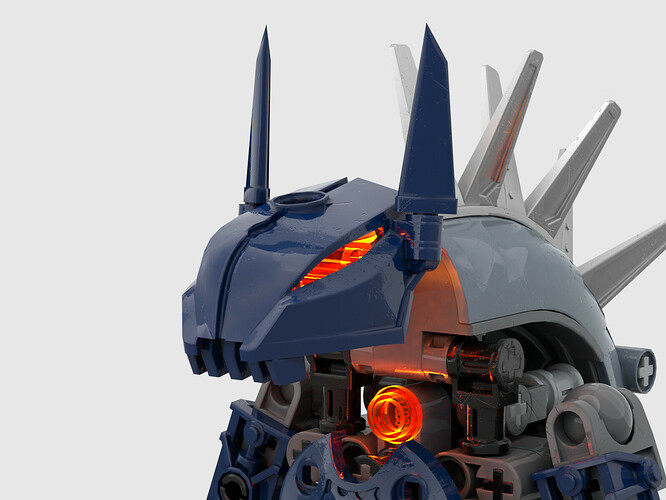 ooh a sonics rahkshi!
ya don’t see many rakshi self mocs.