I was inspired to make this after Mesonak’s very deep monologue from the TTV #206 exerpt.

Keeparak is a Vortixx that has been around for generations, on an unending pilgrimage across every province of the known world, and is also a mystic who can receive visions of the past or future, however she cannot differentiate the two, and so there is always a degree of uncertainty to them. There are few occurrences that suprise her at this point.

She is a highly skilled fighter who only acts in self defense, as on the long, winding roads, paths and various other desolate terrain that she ventures down bandit encounters are frequent. On the way to the many pilgrimage stops she spreads her timeless insight to all who will listen, or are in need of information; geographical, philosophical or otherwise. 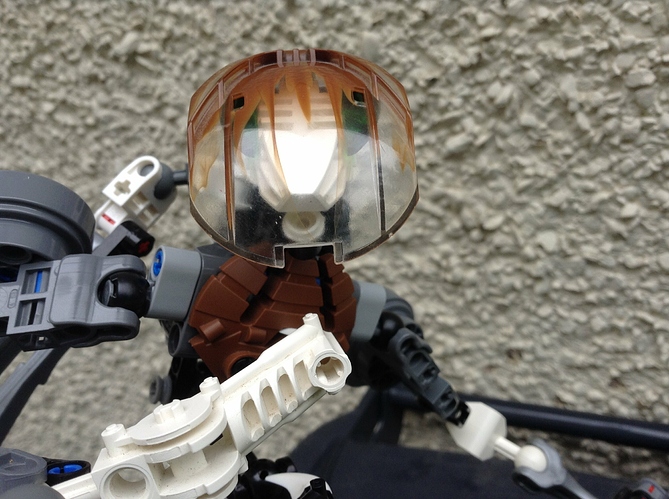 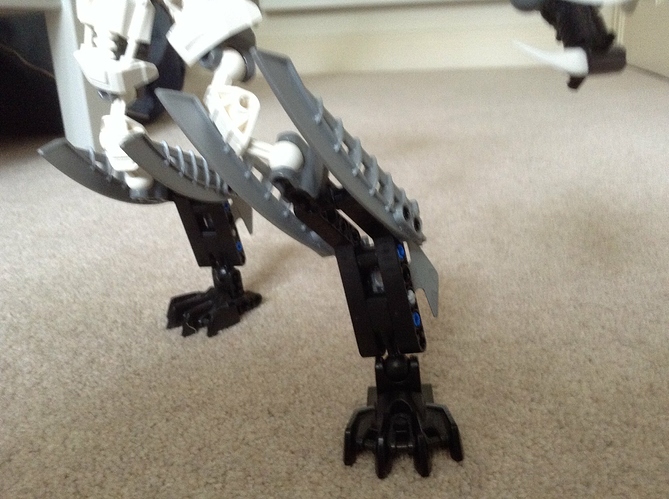 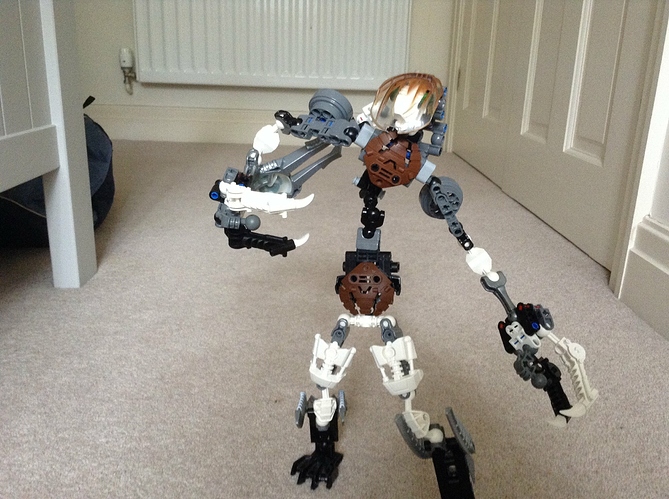 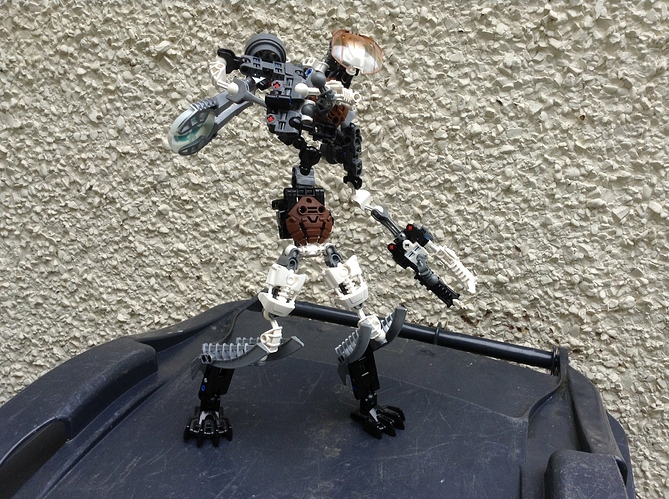 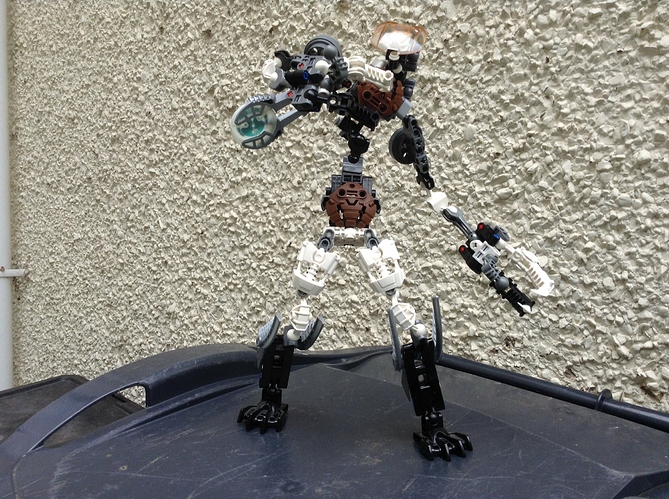 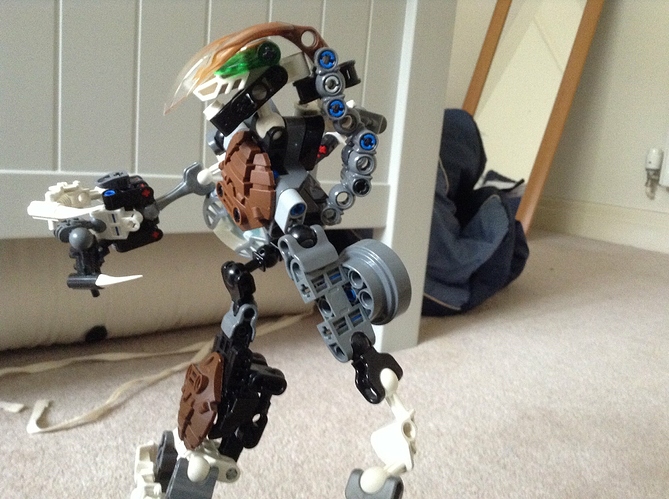 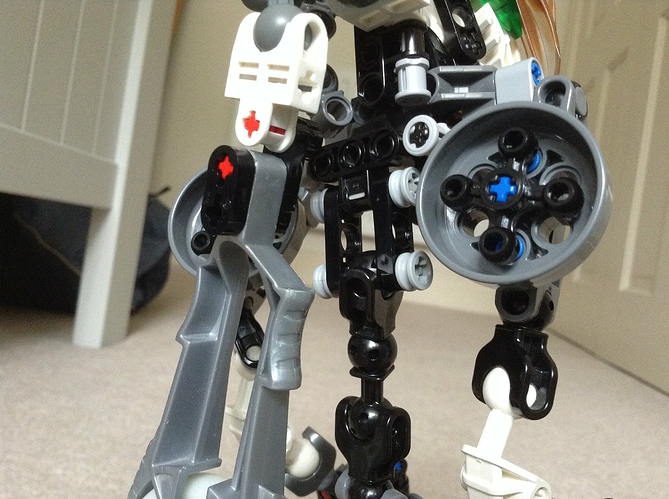 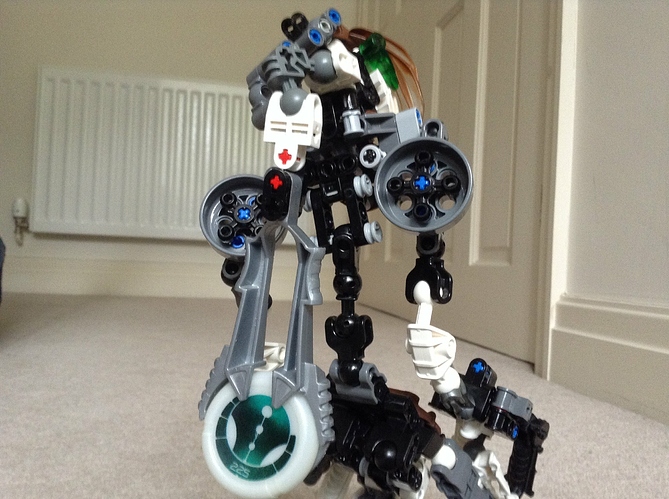 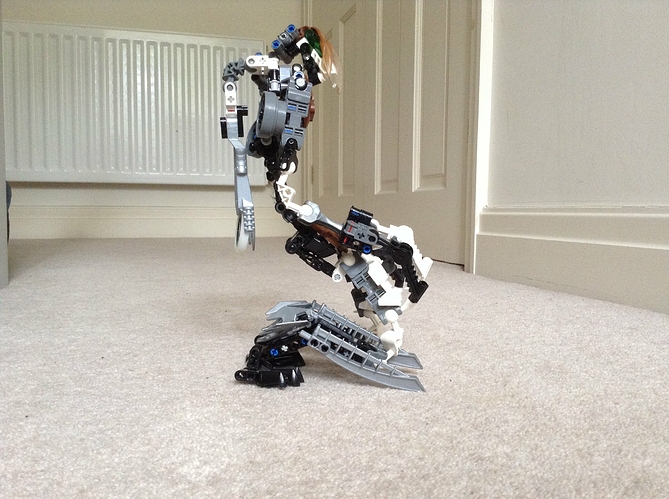 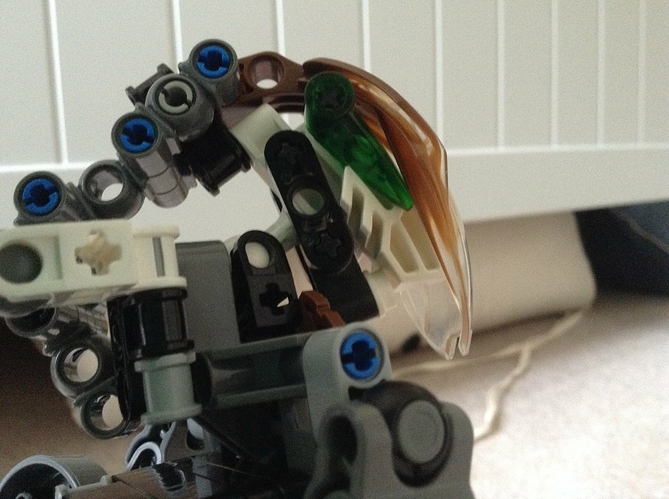 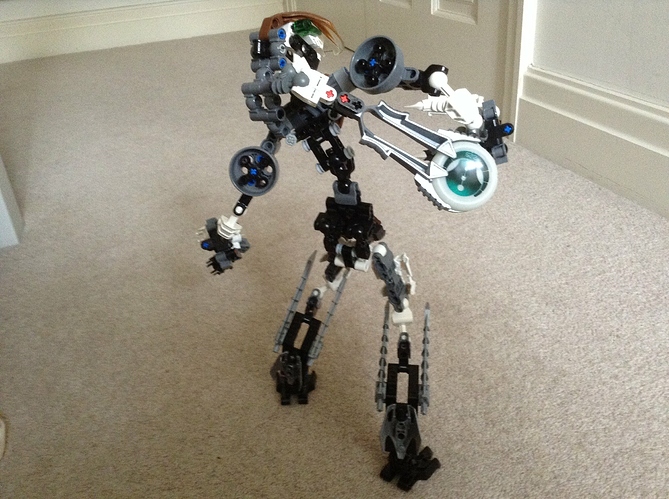 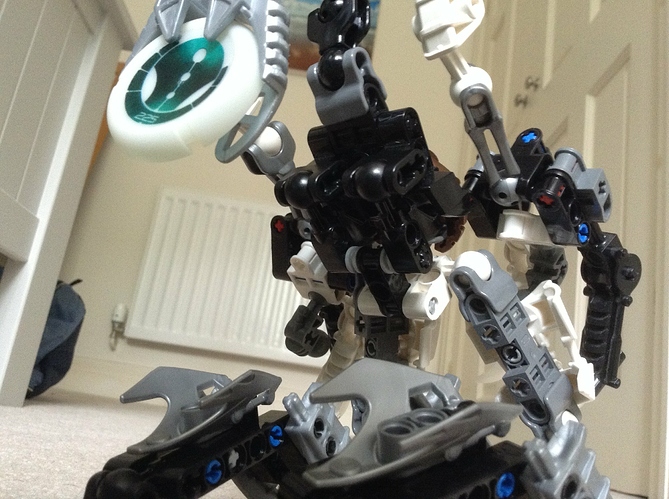 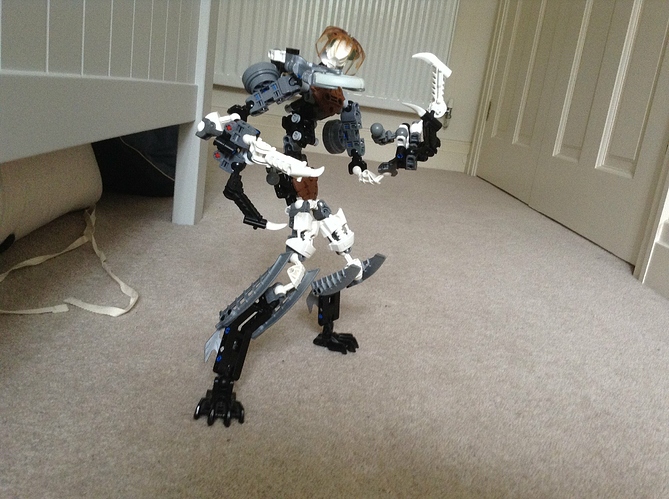 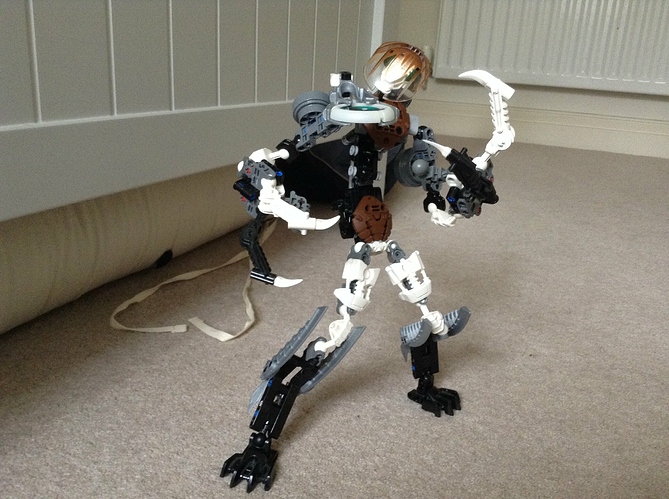 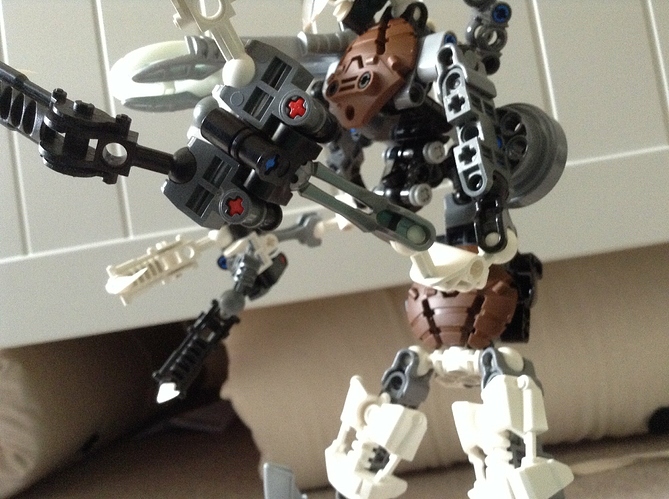 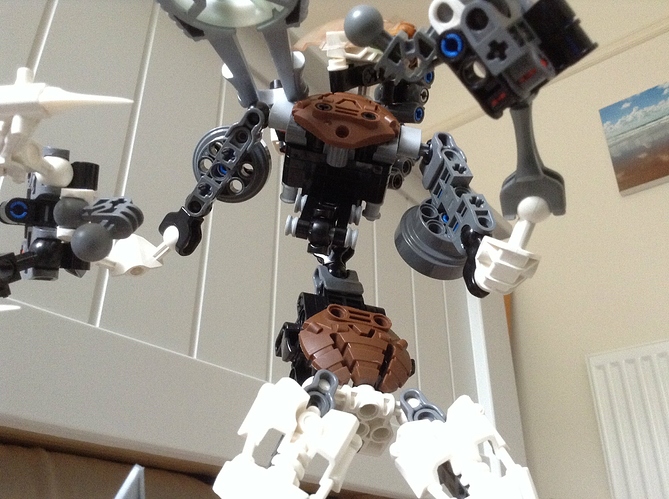 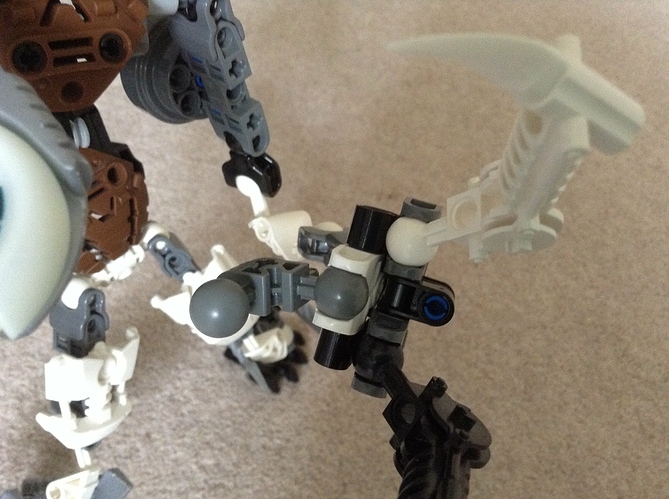 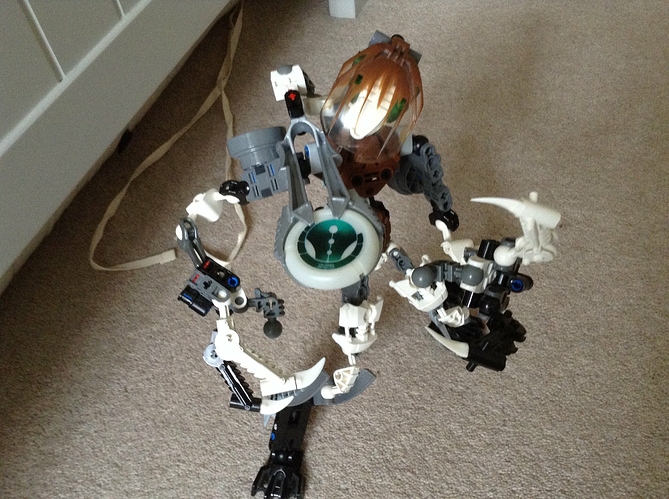 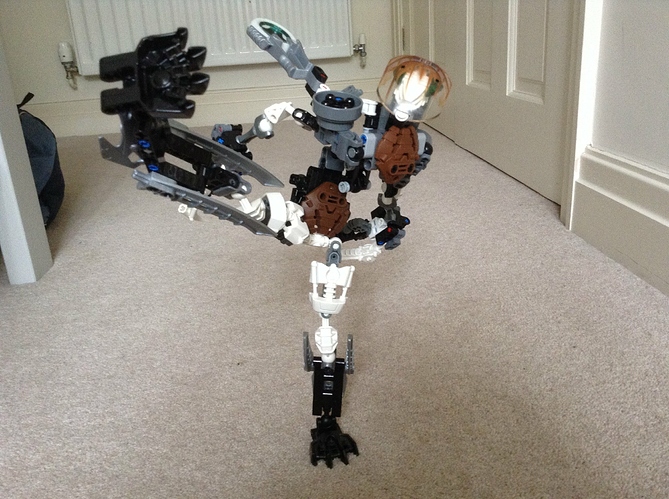 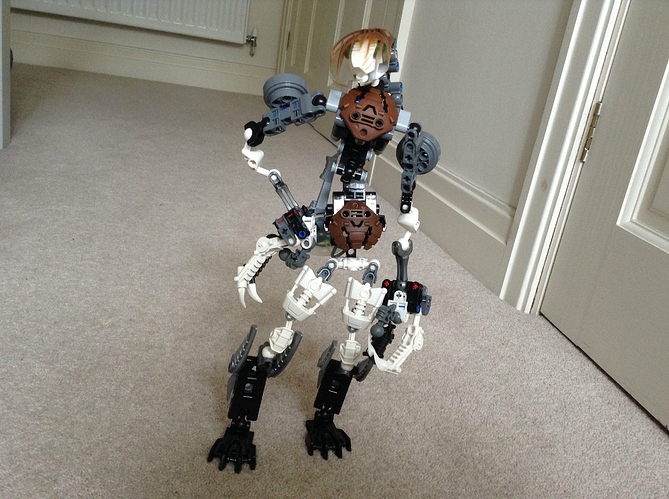 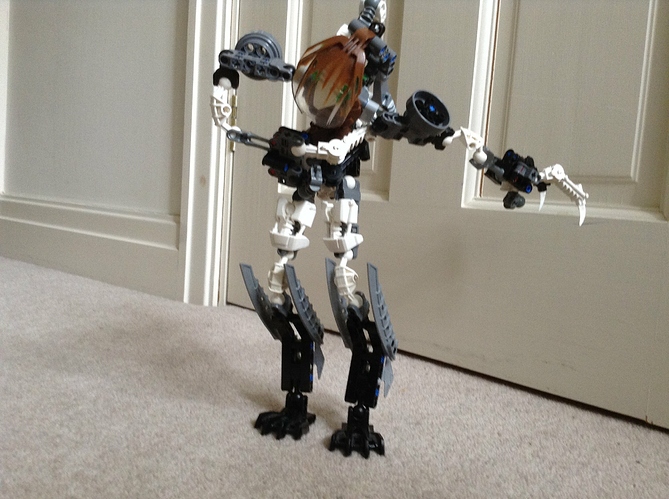 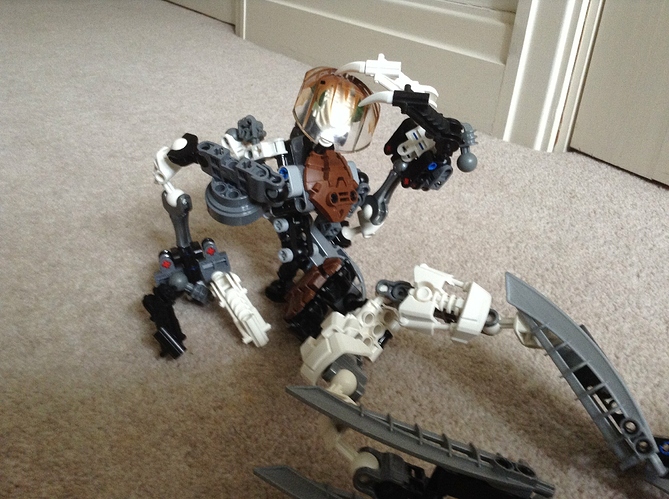 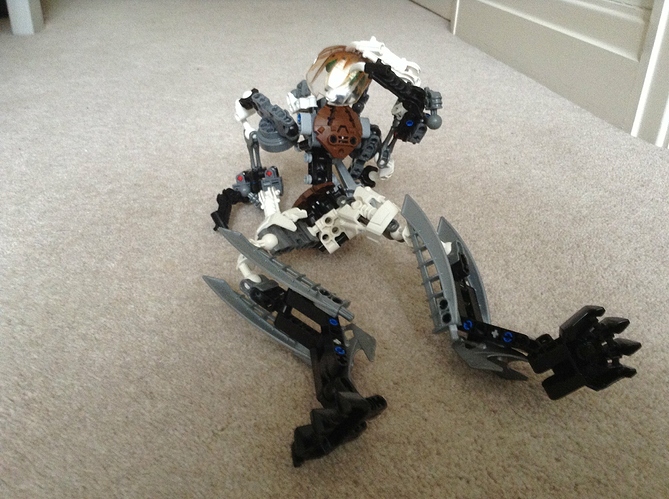 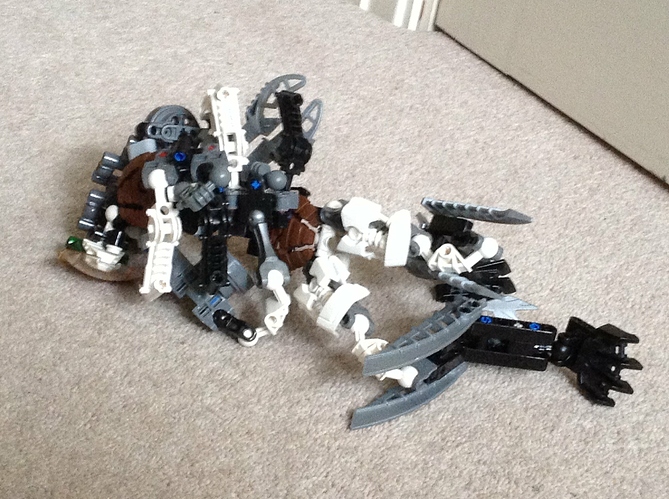 Took about 4 - 6 hours roughly. Getting this thing to stand up is easy enough but any pose that doesn’t involve both feet being flat on the ground e.g. standing on one foot or ‘walking’ is very difficult to pull off. The MOC is also a little bit top-heavy. The launcher also gets in the way of the ‘hair’ a bit. Oh, and this is my first completed MOC.

Let me know what you think!

If you don’t mind me saying, it looks a bit, weird. All stretched out like it’s made of putty or something.

the design is interesting but looks a bit spindly

Yeah, I didn’t really have a plan for the body. I just thought “Would a vahki head look cool with a Bohrok shell thing?” And in my opinion it certainly does. My main goal was to make something unique, and the spindliness I think is also a result of emphasis on articulation, I wanted as much as possible.

the design really looks like it shouldn’t hold its own weight.

There’s just so much going on, it makes it tough to figure out the moc.

Thanks! That’s sorta what I was going for. I was trying to make it look elegant.

@Omega_Tahu Thanks! That’s sorta what I was going for. I was trying to make it look elegant.

@Sammythekat Yeah, and it wouldn’t without the extensive use of friction joints.

then why make it that structurally unstable? it looks really off, and not that appealing.

like a single gust of wind will take the guy out.

It’s not because of the color scheme, it’s the vast amount of flexibility, and strange armoring, tat make it hard to pick out what is what in some poses, in one pose i thought the upper arm armor was the torso

After gently prodding it I can validate your claim. However I personally really like the design, and usually I go for design over practicality. I’m not too bothered by its instability because It isn’t too much of a hassle getting it into a good pose (unless it involves one leg being off the floor) and it’s more intended for posing than play.

isn’t that the same thing???

when you’re posing something, you’re playing with it, mate.

It certainly does take some effort differentiating the pieces in some of the pictures I agree, however looking at it through my own eyes its a lot clearer.

@Sammythekat Not really. For posing you’re intending to make it a static object whereas with playing you’re animating it, e.g. if you’re getting it to fight another thing or something.

actually, messing around with the joints IS playing with the figure. also, mate, please, for the love of god, refrain from double-posts.

The mod itself is very spindly and messy, not the most appealing thing I’ve seen

There’s just so much going on, it makes it tough to figure out the moc.

I can’t tell what most of this is, it kinda looks like each limb has a joint or two too many. I like whatever you have going on with the braid thing going down its back but the rest just feels too busy.

Yeah it’s pretty much entirely custom, I hit a lot of dead ends trying to make the torso and had to think outside the box a bit and the business is probably a result of frantically throwing stuff together in the vague hopes that it would allow for a leg to feasibly attach.

@Deathworks235 Think Rahkshi arms would do the trick?

Those would be even longer though.

I’d recommend attempting to shorten everything a little bit. Limbs and torso. Keep the spindly look but go for something a tad more reasonable.

No it’s the bend try making something costum.