My team died almost 600 years ago

Killjoy was originally a scrap thief until he decided to steal a sonic wave cannon of a blind assassin and had two options, die or train with the other assassins 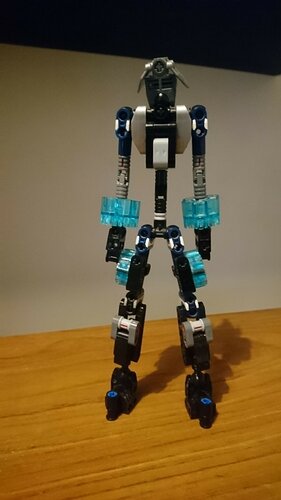 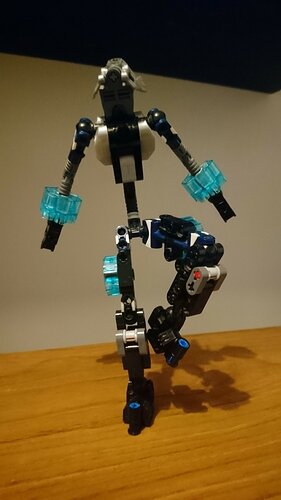 he’s quite nimble for his small size and surprisingly fast 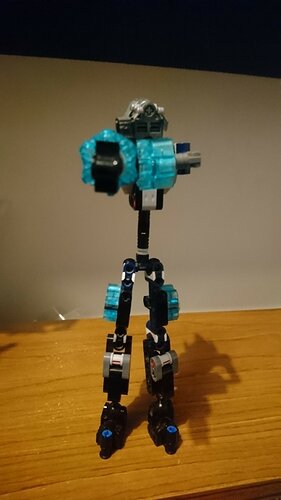 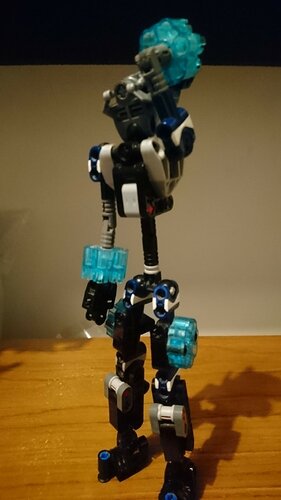 he died 573 years ago in the 3000 year timeline of my own story line but was revived by the main villain, Phantom

is he a fully artificial being of some sort? Because even by BIONICLE standards he is far too thin for a Toa, nay, for any partially organic character - since he has no place to hold a stomach, heart, etc. The hip and shoulder joints are too close to the torso; and his wrists too close to the blue elementsl and limit his mobility. I imagine for a build like his he’d need to take advantage of as much articulation as possible.

Also, at what point does your storyline diverge from the main BIONICLE storyline, if it is connected at all?

I hope this answers your good questions

If your story doesn’t take any major elements from the BIONICLE storyline, I’d advise you not use the BIONICLE name for it, since it has its own connotations, including its character designs.

noted I’ll change the title of my series

what is the difference between the age and actual age?

He doesn’t look a day over 20! I really like the build on this, it’s simple, yet it has a lot of elegance. The gun barrels on his wrists make him look so cool and intimidating, I’m scared just imagining encountering this character irl. Keep up the awesome work, I can’t wait to see what you make next!

@Samtastictogo 573 years is just a long time and it doesn’t affect his movement, I thought it might a cool idea to have some characters in the past of my story’s timeline be bought into the time of the story’s setting, different combat styles that all but forgotten, since the planet is ridden with war.

@Vezon_Olmak thanks for the praise of the design, the only thing that took a while to figure out was the head

@Samtastictogo 573 years is just a long time and it doesn’t affect his movement, I thought it might a cool idea to have some characters in the past of my story’s timeline be bought into the time of the story’s setting, different combat styles that all but forgotten, since the planet is ridden with war.

Probably the best thing to do there is to say that, for him, 600 years is “27 in human years”, if that’s what you mean by that?

he died at the age of 27 but was revived 573 years after his death so his mind and body will function like it did before the death,

sorry for not saying that clear enough

…There’s not much to talk about with this. It’s a technic skeleton. His arms are ratchet joints, his legs are technic pieces with no major colour cohesion, his torso is very simple and adds silver into the colourscheme, and his head… Is a hand connector with an armour piece.

The only amount of colour cohesion on the figure is the trans blue stud shooters (and their disc-shaped counterpart pieces) as well as excessive amounts of black/dark blue pieces. This figure is all greebles and no meat; the withered approach could work better if taken to a simpler extreme with super-thin limbs made from minifigure tools and a more sloping design in the blue portions, which could possibly be reworked into shackles or electric gloves of some kind.

No comments on the story.

thank you for your criticism

when I was making this, I had to work with what I got and hopefully I can get better making short moc characters, also I like the sound of electric gloves might use that for another moc