Hello everyone,
this is my first post of the sort, wanted to give it a try after all

(sorry for joint pictures, can’t post more than 3 currently). Recently I’ve taken interest in creating MOCs for characters that never had a set released, and naturally, Lariska is one of the first to come to mind. Surely this is anything but a new idea, but I’m hoping that this particular rendition of her will be interesting to some. So let’s get started with some pictures: 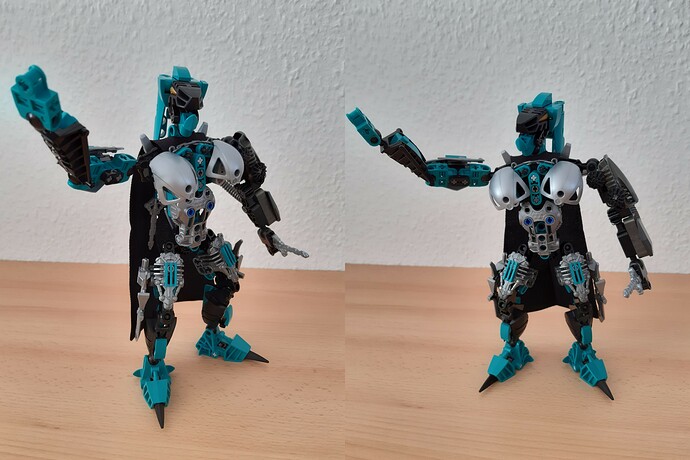 Lariska general6912×4608 3.28 MB
As you can see, starting with the info that she’s easily confused for a Vortixx, the model takes a fair share of inspiration from Roodaka. It also attempts to fulfill all required aspects known of Lariska without getting too clustered up; in fact it tries to be as close as possible to a set one might actually see released by Lego.
Certainly the biggest challenge is her color scheme making use of dark teal. I decided to keep the Vortixx head base and as such, the color combination came out as black and dark teal, with as much of the latter inserted as possible. And then we have the cape, of course, because capes are awesome and this one fits so incredibly well

Lariska torso &amp; legs details5184×2304 2.22 MB
Just like the protosteel daggers, the throwing knives are held by clips and as such are easily detachable when needed. The front part, here shown without armor pieces, not only allows for well, female characteristics (debatable perhaps, but included mainly based on the similarity to a Vortixx, plus easy identification), it also serves to attach the cape. Note that this is actually not an illegal building technique, the pieces really just fit in so well.

Lariska left arm &amp; head details4032×1728 1.27 MB
The general head design is rather simple, but luckily, with some relatively new pieces, making a simple hairstyle (and I love doing those

So there you have it! Hope you enjoy, and for any questions, feel free to ask.

I think no Nuva boobs was specifically mentioned for the contest

As far as breasts go, Lego did the same with Roodaka, so it seems like a sort of official thing. Other than that, it’s quite guaranteed to make the character recognizable as a female. I agree that it’s an aspect open for discussion; my main reason to keep the build this way (this being about the third version) is that the torso design holds the cape as well. I’ll probably start with some redesign ideas tomorrow.
About the contest, didn’t know there was one until now. I can’t seem to find anything about it, could someone provide a link for further information?

About the contest, didn’t know there was one until now. I can’t seem to find anything about it, could someone provide a link for further information?

The Lariska canon contest hasn’t started yet, and it’s not guaranteed to happen, but Lariska is on the slated character list after the Hagah and Tuyet contests are completed. For more information, check out this topic: BIONICLE G1 Canon Contests Discussion & Questions

As for your Lariska MOC, I think it looks pretty good. You used teal really well, and the mechanical arm is great. The breasts are awkwardly far apart, but they definitely achieve the goal of making her recognizably female. I recommend placing them a bit closer together and maybe angling them down a bit, if that’s possible. The cape looks cool but definitely feels out of place for Lariska, in my opinion. It’s a solid build overall, though.

Secondly.
Bro, I think you have got a bit mixed up. People, outside of story, think she is similar, she is not. In story she “looks like a Toa” and in the context of birth of a Dark Hunter, does not share facial features with Roodaka.

So, nice Moc, glad to see you are so enthusiastic about the character. But I personally think the design should go another direction. Also and this is up to you, I think silver is not very camouflage so maybe phase out most of the silver. I can guarantee it will fare better in the contests with such changes.

Thanks a lot for your reply. As devastating a news as it first was, seeing how I got it all wrong, further info on how to improve the model is greatly appreciated. The silver armor part, never even thought about it to be honest, the pieces fit so well. But it does seem like a better idea to remove it in the context of the character.
I’m really sad to see her go, but then again, it was more of a Lariska-themed Vortixx in the end, and that just doesn’t cut it. Currently trying to come up with redesign ideas… guessing that only about half the model will stay as is, should modifications be added here or would it be better off in a separate thread?

I like it when people post improvements & modifications in the same thread, it’s usually interesting to be able to see the progression of a MOC over time.

I definitely wouldn’t say you got it all wrong! - MOCing is inherently subjective, and there are some great ideas here even if they might not fit exactly within the lore. It’s immediately recognizable as Lariska, and there’s some really interesting build techniques going on (particularly in the upper legs and torso). I also don’t have a problem with the silver armour, but that’s just me

The Nuvoobs do look a little awkward with their current placement, and like others have mentioned there will be some level of restriction around those for the contest if you’re thinking of entering (though certain uses might be let through if they’re not overly ‘sexy’).

Overall there’s a very solid base here, and I think you’d do well refining the existing design rather than starting from scratch

should modifications be added here or would it be better off in a separate thread?

That’s up to you dude, as @FuzzMuffins said, seeing improvements in a thread can be quite satisfying. But if the design changes a lot you may want to make a 2.0 topic.

Oh btw I agree with this also, the design doesn’t need to be “scrapped” just built upon. And things like silver are subjective, sometimes you have to choose between shaping and colours.

Hey guys! Back with an update.
Appreciate all your feedback, and based on it I made three decisions to alter the model:
‒ First off, the head was probably the biggest issue. Not gonna lie, it’s hard to come up with a replacement, especially at this scale, so there’s really only one design present at the moment.
‒ Second, I scrapped the breasts because with several people mentioning it, I’m beginning to understand how a male audience would likely see other intentions than just adding recognizability. Other than that, it was based on Roodaka and that’s out of the window anyway.
‒ Last but not least, it does make a lot of sense that a stealthy Dark Hunter would abstain from having flashy colors on her armor (the teal kinda is, but can’t do much about that). In that sense, I decided to replace the silver parts, and that ended up offering a lot more space for teal parts.

The torso design in particular profits a lot from the latter two aspects. The arms remain virtually unchanged, and the legs are still functionally the same. The only part I’m not 100% sold on yet is the head, though it’s really hard not to see a face there. Oh and, of course the cape stays, because capes are awesome and Bionicle is lacking those big time. Also the “spikey” design is intentional, coinciding with the head.

So much for text, here’s the pictures: 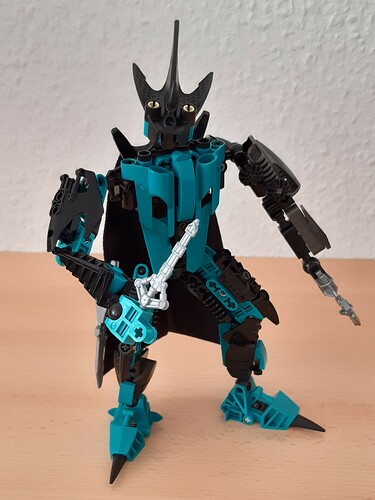 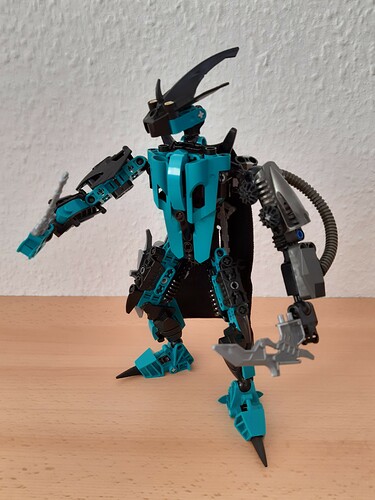 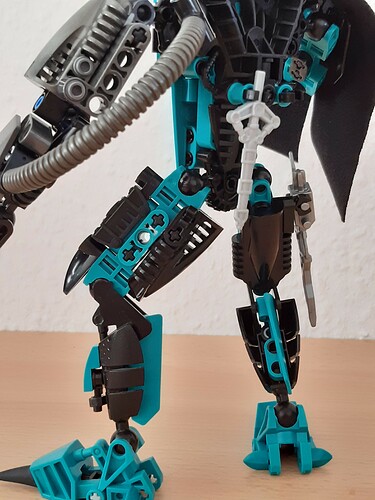 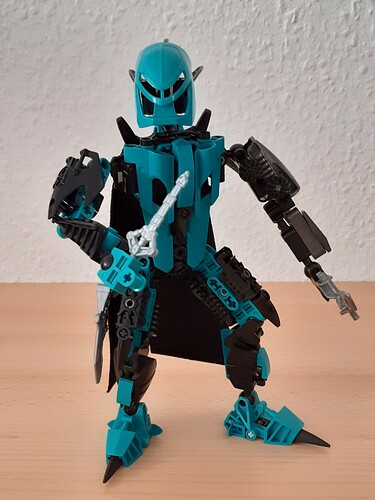 And here we have the biggest argument for the head design. Apparently Lariska doesn’t make much use of it, but she is in fact able to wear (a large variety of) masks. A simple replacement adopts to various uses:

Lastly, here’s another variant for the head that seems nice but doesn’t really turn out that well in the build imo. Reasons for that are mainly the prolonged neck, and the fact that with the jaw added, she’s barely able to look downwards. Mask connection functionality is the same, though. 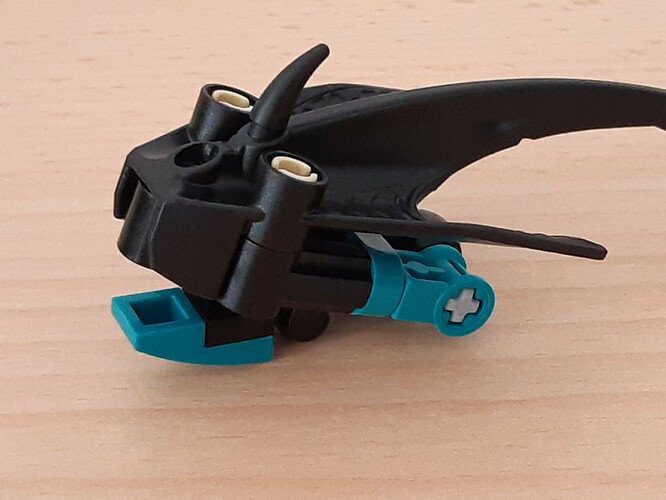 So much for today. Would love to hear what you guys think!

This is a great update, although I think the previous head was much better. And I personally liked the breasts, but I think the reduction of silver and increase of teal definitely improves the color scheme.

I agree on the head, though I’m really not sure if I’m just missing it from previous exposition (not to mention eight other characters of the kind still being around).
The thing that still seems a bit unclear is if Lariska does definitely not feature a Vortixx-like head. Birth of a Dark Hunter, as it’s available on the BS01 wiki, doesn’t seem to make a statement about that. I suppose Greg Farshtey himself probably clarified in one of the various Q&A threads? If anyone knows where to get a definitive answer that’d be much appreciated.

Looking through Lariska’s BS01 page and Birth of a Dark Hunter, Federation of Fear, and Reign of Shadows, there doesn’t seem to be any comment on Lariska’s head/face or any comparison, favorable or otherwise, with a Vortixx. I think if Farshtey had clarified it, it would probably show up on Lariska’s page, so there likely isn’t any reason for her head to look one way or another.

Hey guys! Sorry for the long wait.
I’ve been testing out new variations and parts, and while most changes are rather subtle, here’s an update. You’ll notice the head has been mainly reverted to former status (I couldn’t quite get used to it either), with some modification to the jaw to differentiate better from Vortixx heads. The back got changed because it didn’t allow for much movement of the head, unfortunately. 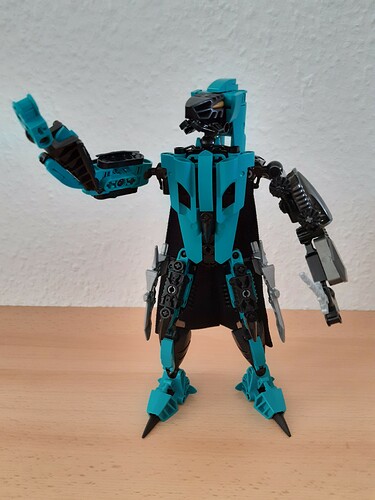 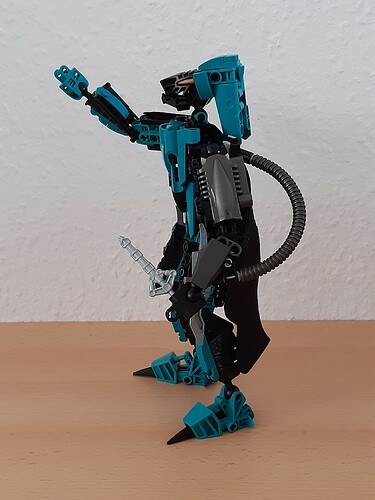 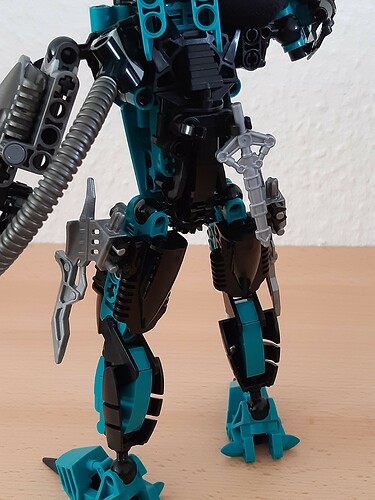 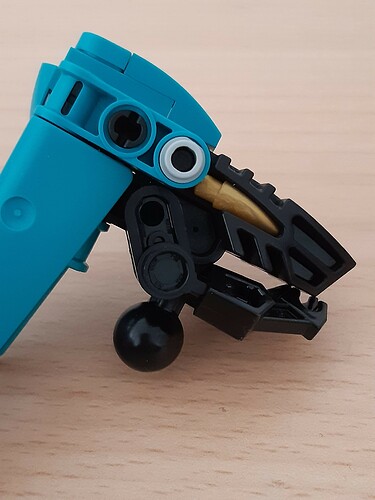 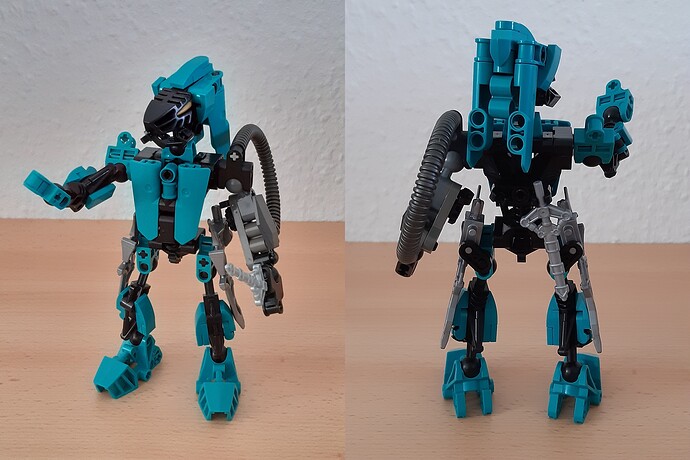 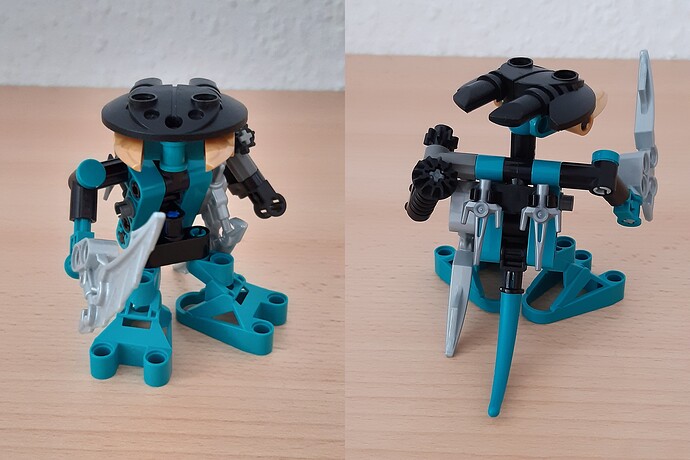 It still feels like I am looking at a Vortixx, which I don’t think I should be feeling

While the vahki head still looks a little vortixx-y, I really like the mandibles and they’re giving me some great halo elite vibes

(And that teal bohrok-va is adorable!)

Apparently the head is a kinda controversial topic. I for one am very happy with the current build though. The Vahki head in general offers a lot of variability, even to wear masks, which makes it one of, if not the most versatile and detailed head pieces available. Plus, there’s more characters making use of it such as Krekka or Voporak, so if it mainly reminds people of Vortixx/Roodaka that may be a sign of a certain feminine aspect to it. Either way, it has a sort of sly feel that I think fits well with a Dark Hunter like Lariska.
That being said, your input is very welcome and has given me a great time spent redesigning and improving the build, to what I feel is the best version of my Lariska thus far. So big thanks for that!