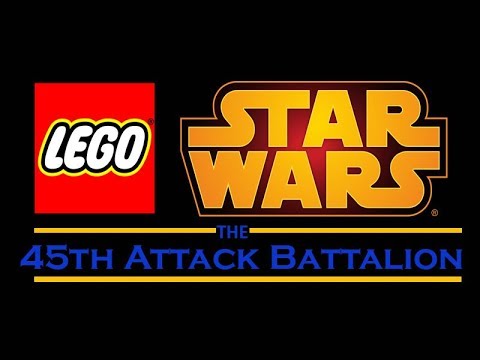 To celebrate my 10 year anniversary on YouTube, I present a reboot of the first stop-motion series I ever worked on. Inspired by The Clone Wars TV series AND the 2003 Micro Series, The 45th follows a squad of Clone Troopers during the Battle of Muunilinst as they try to destroy a Droid factory close to the besieged city.

Featuring better written characters, stop-motion, and effects than what I was capable of producing nine years ago, this is a return to what originally inspired me to begin Brickfilming in the first place. Enjoy!

I’m going to do an analytical review of this, because I’ve noticed a lack of that with a lot of content posted here on the boards. Keep in mind, for anyone reading this, I’m not making any sort of reference to any other content Prentice has posted, I’m reviewing this on its own merit.

I want to preface this by stating that I do not intend any sort of insult or attack in this review, nor am I trying to offend you or anyone else. This is just me taking, both at face value and from an analytical perspective, a look at what you’ve posted as of six hours ago, by the time of this post.

Without further ado, let’s get this thing started.

Three minutes in and there’s something dreadfully apparent: The animation quality is abysmal. Not only do the characters and vehicles look like they’re floating through a sea of JPEG images - or in this case, three or four at maximum - there’s no indication that the terrain they’re supposedly on actually matters whatsoever. The entire first scene could take place in a bowl of mashed squash and it wouldn’t make a single difference to how it looks.

Actually, now that I think about it, Geonosis does share a resemblance to mashed squash…

The special effects feel incredibly cheap and unrealistic, like all of them were pulled from a free special effects website and placed wherever it’s convenient. The blaster bolts, especially, reflect an MS Paint quality nearly all the time they’re present.

Thirty seconds later and the animation frame rate dropped even more. I’m beginning to wonder if this will be running at two frames a second by the end. And then with a sudden jump cut, we have reached the end of the first scene.

Everything in the second scene that feels off I’ve already mentioned as being in the first, so unless I mention an exception to them, they’re going to remain a running constant throughout the whole twenty minutes. And here I’m going to bring up the next major issue with this: the voice acting.

I understand the plot importance of having all the clones have the same voice, but in a world where characters interacting are so stiff you wonder if they’re supposed to be alive at all, you can’t tell who’s talking unless the camera violently snaps to their position. There’s several segments of the second scene that reflect this perfectly, with two or more characters and no indication as to who is talking at all except for names being listed. Not even a head turn.

And the voice acting isn’t really good, either, although the battle droid voice is passable.

Scene three has exact repeats of the problems I listed before, with a couple extra: I noticed one of the clones gliding across the ground instead of walking, when everyone else was walking. Later on, three clone troopers do it despite their leader walking ‘normally’. You really can’t say that isn’t lazy animation when the walk cycle for characters is two frames.

The second issue is the incredibly large amount of clips snatched from other media, like the lego star wars video game and clone wars (original). They serve little purpose and often end up layered on top of scenes or cut right before the animation begins, making them feel completely irrelevant.

Overall, I feel like this animation was incredibly short-budget, had very little time to actually be worked on, and offers very little in entertainment value. The voice acting is under average, the animation is outrageously bad, and the special effects don’t even feel like they belong. The only thing I can say was a positive was the general script, although some particulars were rather poor, but nothing compared to the rest of it.

Again, I’m not trying to offend you with this. This is nothing more or less than a analytical review of your video, and I do not intend any sort of insult or attack by it. I’d love to see you improve with your animated works, but I know that won’t happen until something is said about the flaws with them - I’d rather it be me that lists them than someone else.

Again, I’m not trying to offend you with this

Well, you have. The fact that you suggest I used clips from the LEGO Star Wars video games is unforgivable. Clearly the only footage I reused was from the micro series and Attack of the Clones.

In all seriousness, this is in large part a fair critique.

had very little time to actually be worked on

This is true. It was all filmed in the space of roughly two weeks during late summer of 2018 before I left for college again. There are a few times where the shots bounce slightly during green screen shots that annoy me, but overall I feel most of the animation for the faster-paced scenes are actually quite solid. There are a few moments where gliding occurs just as a necessity of the minifigures themselves. LEGO Battle Droids infamously have connected feet, and when the squad is searching for the factory entrance, two of them are keeping watch of the left and right flanks. The minifigures must slide if they are to move.

That is a downside to working with characters that wear helmets 90% of the time. Given my time constraints, I couldn’t animate head turns as often as I would have liked, and skipped mouth animations for the brief times characters without helmets appeared because it was so infrequent.

This is a thing for two reasons: 1- it’s quick(ish) and easy to do. 2- it pays tribute to older Brickfilms back in the days when Photoshop and other such programs weren’t as readily available. Pizzamovies didn’t have any fancy effects until near then end of his time on the platform, but the tone and writing style, not to mention just the idea of stop-motion in of itself was enough to keep insert the viewcounts here entertained.

That’s a reason why I highly disagree with this statement. Kids nowadays are probably more likely to watch Fortnite content on YouTube than anything else, but if they were to happen to click on something non-Fortnite related, this would blow their socks off, I dare to think.

It has it’s fair share of flaws to be sure, I’m well aware of some of them as they might be budget or technical limitations. However, that doesn’t mean there’s very little in entertainment value. It’s a story set during the Clone Wars, an era that fans have been very vocal about wanting more. There’s Easter eggs and references to both the micro series, the 2008 series, and other areas of Star Wars lore. While not the most realistic, there’s lasers, explosions, and all the fun stuff one would expect from something like Star Wars. A couple Jedi get some quick cameos even.

I’m never 100% satisfied with a project whenever I complete it. I’m usually well aware of some problems it has, but am just unable to fix them for whatever reason. Something that bugs me about this is that the ending feels rushed. I wrote and rewrote it a couple times but never quite got it where I was 100% satisfied with it. The Vulture Droid fight for one is something that looked great in my head, but I just didn’t have time to execute well. It’s too short, and you can’t tell who’s really saying what when coming up with a plan to deal with them.

For what it’s worth though, the end product is still a fun half hour journey that has my inner ten year old squealing in delight. I might be biased, obviously, but there’s entertainment a plenty to be had with it, I think.

And the voice acting isn’t really good, either, although the battle droid voice is passable.

I thought it sounded pretty good, actually.
Overall, I agree with most of your points, but I feel it does have a certain charm to it.

Those walk cycles… DID YOU EVEN TRY!

Ahhem… anyway, decent effects. If made at a HIGHER FRAME RATE with more frames of MOVEMENT, I would like this animation more. But hey. 5.2/10