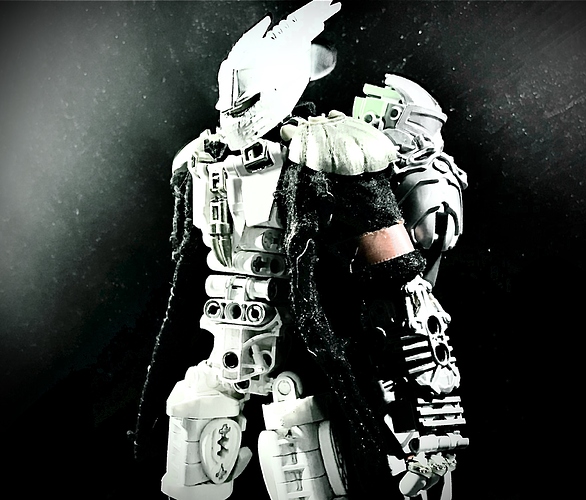 Artillery charged forward and retrieved a chain whip out of what Yttirum assumed was a pocket dimension.

“ hasta lavista baby!” Artillery shouted jumping over Jaller’s barrage of attacks a nd landed behind him, “nothing personel, kid!” He wrapped the chain around Jaller’s arm and threw him. “Deal with that-“

Jaller was back up and was running towards him, “never mind.” Artillery thought fast and pulled out one of his remaining grenades and threw it at Taox’s feet sending him flying towards Yttirum.” You can handle those two, right? “

“Two! What do you mean two?!” Yttirum asked running over to where Taox had landed.

“Nuparu, He’s on that ledge.” He yelled as he motioned with his head and countered an attack from Kongu by grabbing a cordak bullet with the chain and threw it back to him, “CATCH!” Artillery said as he blocked an attack from Jaller.

“Neriex, can you climb up on that ledge and deal with Nuparu?”

Yttirum said pointing towards an overhang.

Neriex gestured towards her leg, it looked pretty bad but something diverted his attention, it was a knife hidden in one of pouches on her side.

Yttirum summoned a pillar of metal that launched her towards the ledge.” here’s to hoping she catches it.” Artillery shouted as he blocked another attack.

Neriex flew towards the ledge and was able to catch a glimpse of who she assumed was Nuparu standing on the ledge with a shocked look on his face.

Neriex caught the ledge and hoisted herself up. “ What the heck was he thinking, oh wait.” Neriex realized she didn’t have her weapons. “Look we can work this out-“ Nuparu interrupted her by slinging two large chunks of earth at her.

“ON YOUR LEFT!” Artillery shouted a tinge of annoyance in his voice as she dodged the two chunks flying at her.

“STOP!” she shouted commanding Nuparu to cease the barrage. To her surprise it worked.

“Neriex Try That again!” Artillery commanded as Jaller tried to strangle him. “HA like that’s ever going to happen!” He promptly responded as he punched Jaller in the gut. “But, I do have a question” he paused “Neriex, it’s not the time to be ignoring an order! any who… what was I saying again…OH RIGHT!” He snapped his fingers, “how does one pronounce your name, is it Jala or Jaller? This is really important and I would prefer if you’d answer it as soon as possible!” He asked as he struggled to stand upright against the strong gale kongu was producing.

Yttirum was having trouble keeping his footing as well ,Taox had frozen the wet sand under them.

“What I need is something to break the-“

“DON’T YOU FRIGGIN’ DARE SAY ICE! I’M SAVING THAT ONE AND IT WON’T BE NEARLY AS FUNNY IF YOU SAY IT FIRST!” Artillery interrupted as he strapped two rockets to his arm and kicked the sole of is boot on his leg and shot up into the air and aimed himself at Kongu he pulled his goggles down and activated the rockets on his arm and shot himself at the Toa of air, Artillery punched down nearly missing kongu’s mask by mere inches. “FRICK.” He cursed as he corrected and began wildly kicking before he hit the ground and began to be dragged by the projectiles towards Yttirum his heels digging into the sand. . “TIME-TO-BREAK-THE-ICE!” Artillery lowered his arm and pulled the tape off of the rockets, “GET DOWN!” He ordered, Yttirum jumped away just in the nick of time, out of the corner of his eye he saw one of the rockets hit the frozen sand sending kohli sized chunks flying everywhere as the other flew out of sight.

“GRAB ME GRAB ME!” Artillery shouted frantically as he flailed about. Yttirum had just realized that his ally was currently floating upside down.

“I GOT YOU.” Yttirum said as he ran over. “What’s happening!?” He asked as he grabbed Artillery’s coat.

“Gravitational stabilizers, they were made to provide the user with a form of artificial gravity.” The Toa of light answered as he tapped his boot’s sole and fell down in a heap. “Well that was idiotic!” Artillery said as he grabbed the small rectangle that he was always fiddling with. “You think track No. 135 would work?” He said clicking the button on the left eleven times. “What are you talking about?” Yttirum said clearly confused.

“Too late it’s already playing.” Artillery said as he dusted himself off and pulled his sword out of his portal and threw the rectangle back in.

“Good luck.” He said as he tossed his goggles aside and did a two finger salute, raised his sword then charged.

Artillery couldn’t keep this up much longer his body would soon suffer from exhaustion and start to lag behind, alas this form wasn’t perfect. What made it worse was that his mask was currently in cool-down after peering into the future.

“Woah where’d you come from” he said as he nearly dodged an attack from kongu. “Y’know it’s rude to attack when someone’s distracted!” Artillery retorted as he punched kongu’s, “Finally! That’s what I was trying to do earlier.” Artillery said rubbing his wrist. “Oh hi john.” He said turning left to block Jaller’s attack but failed, Jaller’s sword making contact with Artillery’s shoulder dislodging multiple panels leaving his form exposed. “CRAP.” He cursed backing away from his attackers frantically locking all the necessary panels back down.

Kongu somehow managed to maneuver behind him and kicked him down to the ground, Artillery stood up staggering from the attack.” I… May…have…bit…off…more than… I…could…metaphorically…chew.” He said in between breaths trying to find his footing in the sand. “Frick it!” Artillery kicked sand in Jaller’s face temporarily obscuring his vision. “Now a flash blitz to your eyes should do!” Artillery grabbed kongu’s head jabbing his fingers into his eyes and released the Light charge he’d been focusing in his hand. “Total time till your vision returns is mmmmmmm-bout a half hour… Oh! Don’t worry it’s your turn next.” Artillery said calmly as he shot a laser into both their chests, not enough to injure them but just enough to knock them off their feet. “I suspect you’re going to try and avoid me…HA GOOD LUCK! I KNOW YOUR EVERY MOVE BEFORE YOU MAKE IT!” Artillery had used this tactic before, scare them into making them think this is so, that they would act less predictable and in turn not think things through as much…though if they assumed this was a bluff, well they’d be surprised to find out that it was actually the truth.

“Alright, Let’s do this the old-fashioned way!” Artillery said as stopped and sheathed his sword then tied his coat around his waist.

“Mono-e-mono, fist to fist! AMERA STYLE!” He finished, putting his hands up creating light shields in the shapes of triangles above them. Jaller stood up and stabbed at The toa of light with his sword.

He said as he punched the sword out of his hand. “HAND-TO-HAND-COMBAT!” He said clearly as possible

As he waved his hands in front of his face.

Jaller left with no other option answered by lighting his hands on fire and aimed a jab right for Artillery’s shoulder.

“Gonna haft to do better than that!” He shouted as he ducked, the flames singeing his shoulder. He then moved back and grabbed Jaller’s arm and threw him on the ground

“10 minutes.” Artillery reminded himself that using his power so much would expedite his drain time and leave him incapacitated.

“AAAAHHHHGG!” Artillery screamed surprised to see that Jaller had swept his legs out from under him. “How the turn tables.” Artillery mumbled as he kicked Jaller in the side as he was falling.

Yttirum was distracted from trapping Taox in a cage made of metal when he heard a loud, almost hollow sounding clang followed by a shout of frustration from Artillery.

“MAH LEG!” Artillery his voice filled with a tinge of annoyance. Oddly enough his right arm appeared to have gone limp. “LOOKS LIKE IT’S TIME FOR SOME IMPROVISED COMBAT!”

Artillery began to spin rapidly and promptly fell over, Jaller seized this opportunity to pin Him on the ground, eventually kongu stumbled over a rock promptly joining the dog-pile.

“OH C’MON!” The Toa of light complained as he struggled to break free. Yttirum looked to his left and saw Neriex was buried under a pile of boulders unable to move, Yttirum raised his hands into the air singling their collective surrender.

If you have any criticism and or suggestions please share them I’m always looking to improve my writing.