(One of the last updates for Makuta Infernex)
He is a Makuta architect, he built certain aspects of the Makuta Fortress. He was killed by Teridax after trying to call him out on his scheme to take over the Mata Nui robot. 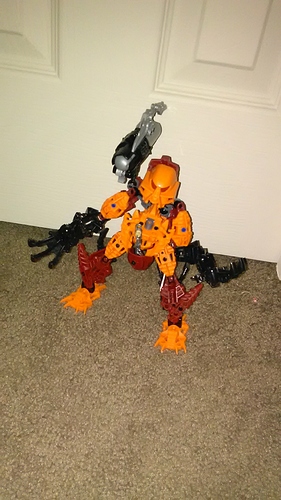 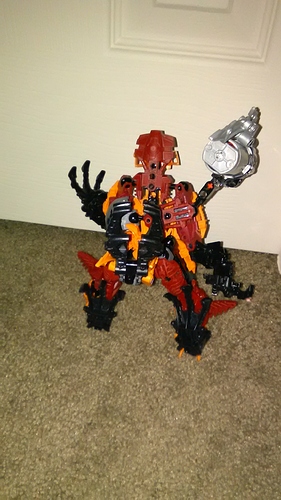 In my opinion, the rahkish head is kinda bulky where it is. I would move it down to more of the thigh area.

Overall I think that this MOC simply is too generic and simple. It’s lacking a certain something that’s hard to achieve by only using these kind of parts. Maybe you should try moving away from the canister set parts and using more Technic parts - since they are smaller they allow you to shape everything much better, to fill in gaps and to make everything look less generic.
Perhaps take a look at the top MOCs on this site in order to get a better understanding of what I’m trying to tell you.

Also the backstory is lacking how he died.

And another thing I’d like to point out to you since you’re new on the boards just in case: at the bottom of your post there is that little pencil symbol which allows you to edit it - so there’s no need to create a new topic whenever you have an update

OK, once again, thank you for your criticism, muh appreciated. Secondly, I don’t have any technic pieces, I didn’t get into Bionicle into the later years.Thirdly, I don’t really have good armor for the torso, so I try to improvise with things like the Inika foot and Piraka claws (Because I think CCBS sticks out like a sour thumb with system pieces). Once more, I will rebuild the MOC and edit the post.

It’s hard to tell much from that perspective. The arms are still pretty basic, but the clawed hands definitely work. Removing the additional joints from the legs also helped there, but… does he have four legs now? Sorry, but that’s against the rules. (Original Form)
I need more pictures to say more.

(as in he can make anything in his image).

Also I fear I don’t quite understand this. Mending as in repairing stuff would be the power of the Kanohi Kiril, the mask of Regeneration, which unfortunately also is on the list of forbidden masks - although I give you credit that it would have been a good mask power for an architect.

It just kinda looks like an amorphous blob, I can’t tell where the torso ends and the limbs begin, and the haphazard color blocking doesn’t help.

Would it be acceptable if he could turn his four legs into two?

The front of the MOC seems to be more or less fine although I’d say that the Inika foot still isn’t covering enough of the front of the torso. However it’s just really simple.

The whole back… sorry, but it just looks like a cluttered mess. The Hordika foot is attached only with a single axle which obviously isn’t enough to keep it in position. The “arm” that holds the Skyblaster is ok, but the opposite side with only that grey piece there doesn’t look like anything. The saw blade’s texture doesn’t really fit in either and the back legs are just adding to the clutter. That you added dark grey to the colour scheme doesn’t help either. Also the second picture shows that there isn’t anything at all filling out the torso.

Would it be acceptable if he could turn his four legs into two?

I guess it would, but it would have to be in a way that doesn’t make it obvious which honestly I doubt you could pull off.

… I really don’t want to hurt your feelings or to keep you from MOCing in the future - after all continued practice can only make you better at it - but I would like to tell you a few … maybe harsh things directly:

Building with the parts you use (although I can understand that this simply might be the only parts you have) won’t result in anything that is particularly interesting - especially in terms of custom torso builds which I personally consider to be the most important part of a MOC. Those basic pieces just don’t allow enough customization - for really good MOCs you just need basic Technic pieces, otherwise you won’t be able to work on the small scale which allows you to give everything a good shaping and to make it optically interesting.
Also I would like to advise you to not build a MOC and immediately post it, but to always take your time, to make the MOC as perfect as you can make it before showing it.

Perhaps try to build a few smaller MOCs - maybe some Matoran and Rahi - to get some practice and feedback. Hone your skills.

I’d like to remove you from the Brotherhood Project, but thanks nonetheless for trying.

Thank you for being upfront, I hate when people sugarcoat things, it bugs me to death. I will try to invest in more technic pieces. I understand that this was not a good idea to tackle for one of my first MOCs. Once more, thank you for your criticism.