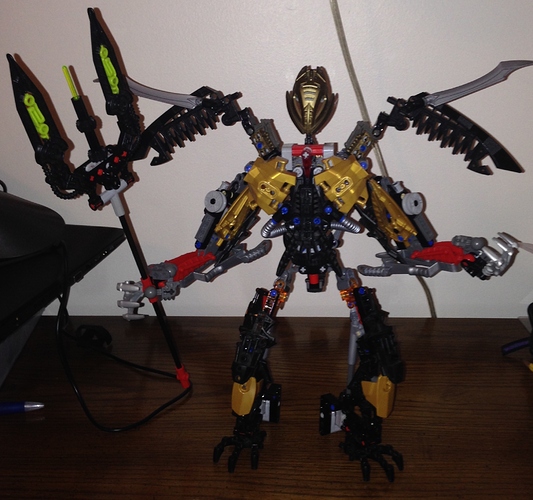 Backstory:
Javenax was created in secret along with several other Makuta over 15,000 years prior to Terridax’s uprising by the Order of Mata Nui to hunt down, capture and if necessary, kill rouge Toa and Makuta. Terridax, hoping to get them out of the way before beginning his revolt, informed him of a rogue Shadow Toa causing trouble in Karda Nui. Javenax and his forces pursued their mysterious adversary to an opening in the GSR’s protosteel. There, the Toa revealed himself as an alternate universe Lesovik before jumping out of the Matoran Universe. Javenax and his forces, not understanding the nature of the GSR, jumped out in pursuit.

After drifting through space for a few hours and actually seeing the GSR in full, they all landed on Bota Magna, where they lost Lesovik. They set up camp, and in the middle of the night, a being who called himself a ‘Temporal Agent’ appeared to Javenax, and informed him of Terridax’s plan, right down to his takeover of the Matoran Universe and his ruthless betrayal of the Brotherhood. Javenax concluded that he would amass a legion on Bota Magna, that, should the GSR return, would be more than capable of destroying Terridax and all who may have sworn loyalty to him.

Unfortunately for him, these plans did not reach full fruition. Though Terridax was killed in his battle with Mata Nui, following the reunification of Spherus Magna, it appeared to Javenax that the Great Spirit had been killed. 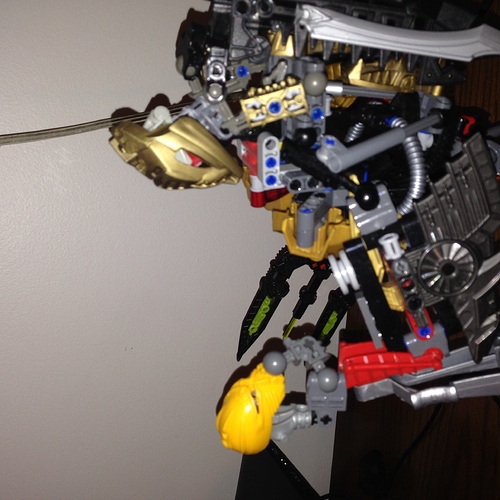 image.jpeg2448×2448 1.08 MB
“So Terridax’s betrayal has felled the Great Spirit. He has faced justice for his crimes. Now all that remains is gruesome vengance upon the Toa who failed to protect Mata Nui”

As the quote suggests, Javenax saw the blame as lying with the Toa. They, in his view, had failed in their duty, so he launched a campaign of vengance, to not only kill them, but also to prove their failure to them. Thus, Javenax sacrificed his inner light, and plunged Spherus Magna into a new age of darkness… 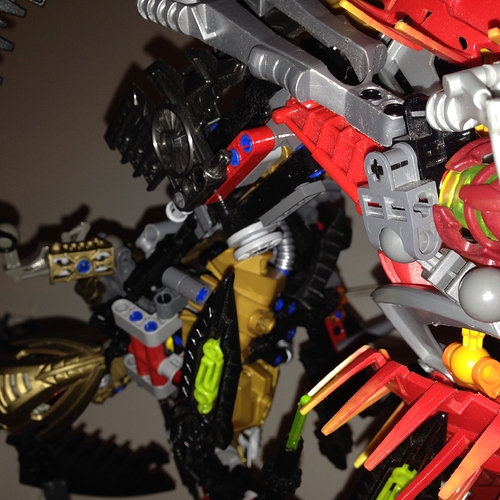 The Moc:
This Moc actually went through 4 iterations before I got to a point where I was a least partially satisfied. The first version was honestly utter garbage which I am glad not to have a photo of the second version was ok except for the ‘waist’, which was basicaly just a single Technic beam. The third and shortest lived iteration was my attempt at incorporating a gear function into the wings, but it did not go well. For the forth and (so far) final version, I took inspiration from 2007’s Maxilos in the torso design. Though this has lead to some gappyness, what it adds in dynamic possing mostly makes up for it in my view. Of course, if you have any suggestions on how to fill in the gap, please leave them bellow. I thought a cloth piece could help, but I’m not entirely sure. 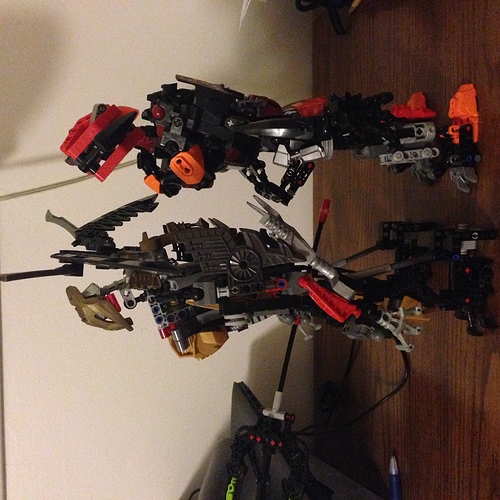 A height comparison with another one of my Mocs, the Magma Titan. If you want to see more of it, please tell me.

Thank you for checking out my Moc! If you have any feedback on the figure itself or backstory, feel free to leave it bellow.

P.S. Javenax is NOT a computer nerd or a barista. I hope you already thought of those things and I didn’t just put the idea in your head. It might make it harder to take this guy seriously.

The color arrangement isn’t too good and the blue pins are rather exposed.

Javenax neck looks rather blocky and the thigh connection doesn’t seem strong enough to hold it’s own weight, one thing that looks alright (from the front) is the golden paw pieces on the chest.

It’s too blocky and messy, try evening out the colour scheme and make the moc less blocky and accurate proportions wise.

The neck is way too long and thin. The colours are a mess but the build is neat though