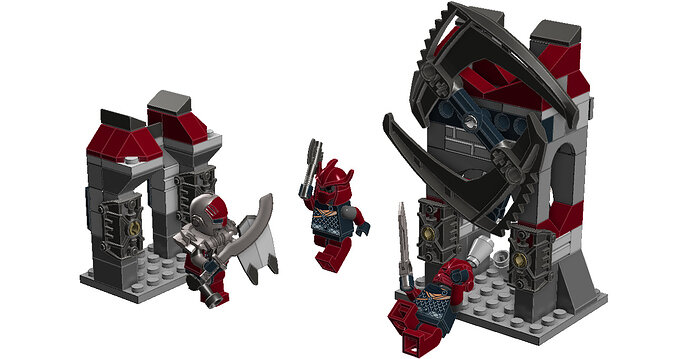 @ToaNoah_Wafflemeister back again with another “work pack”! Second-to-last, it’s the Mangaian Training Troop!

Alright, so here two soldiers-in-training face-off against General Sarda in hopes of becoming a member of the Mangaian army. The three race through an old, abandoned fortress. A trainee rushes too quickly underneath a tower armed with a spinning saw blade, and a barrage of rocks rain down upon him! Another trainee wielding her battle axe charges at the General, hoping to prove herself worthy of Mangaia. 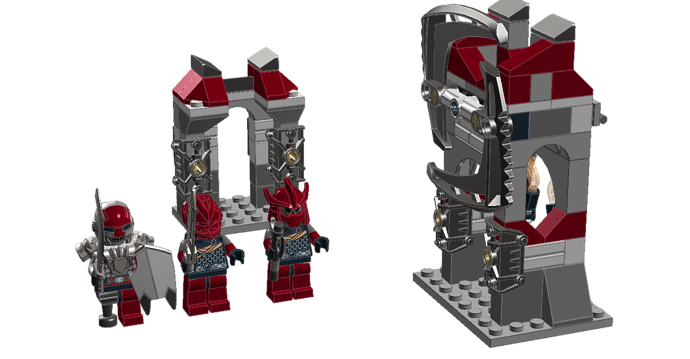 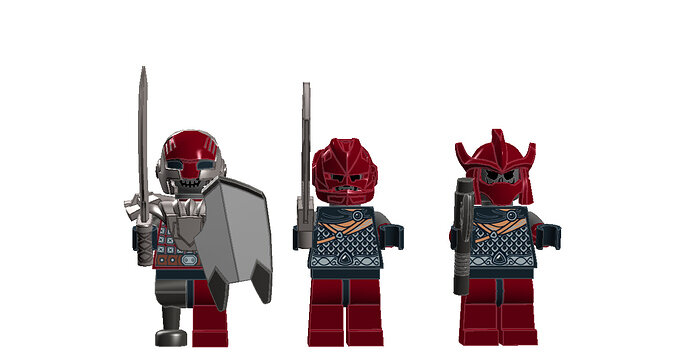 Here are the three minifigs, General Sarda and two more Mangaians. Not much to say, very simple. 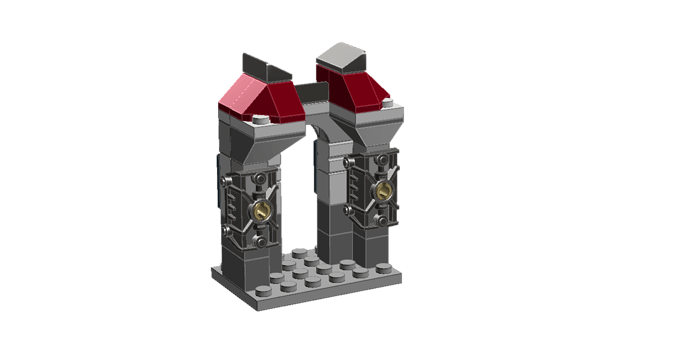 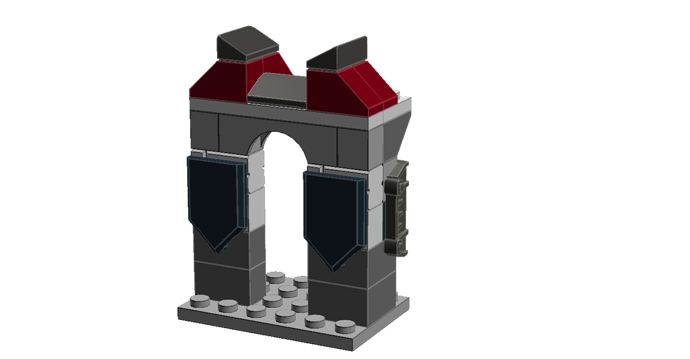 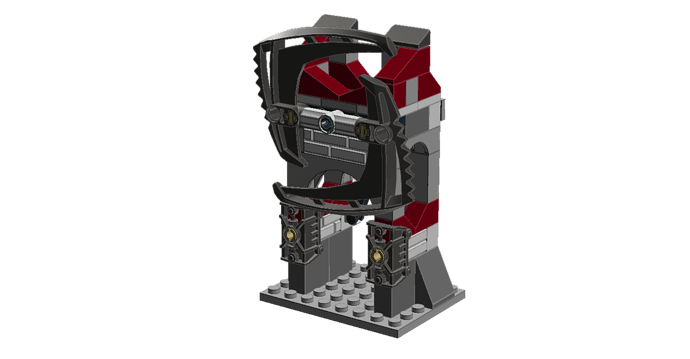 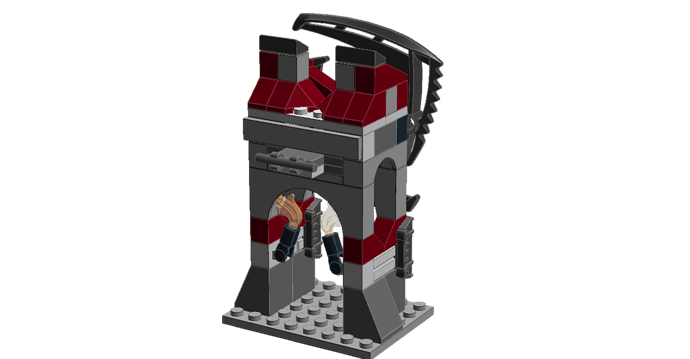 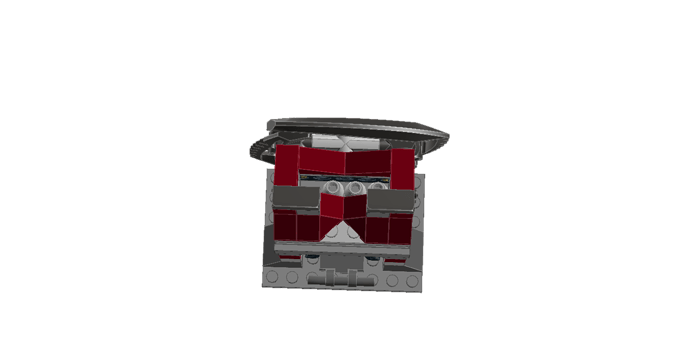 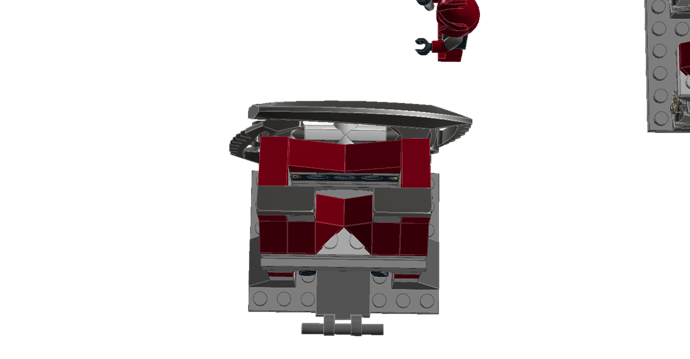 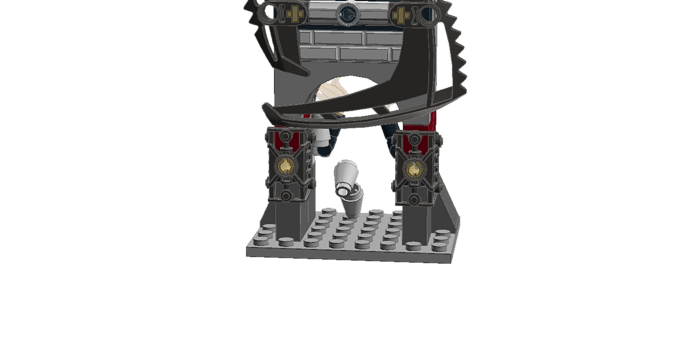 Here are two fortress parts. I know they don’t look much like @Sokoda’s designs, but that’s because (I can’t make it like that at this scale) this structure is part of an abandoned fortress of old. I can see trainees practicing here. In case you can not tell, if you pull that thing in the back, it drops rocks.

EDIT: Thanks to an accidental suggestion by @TheMOCingbird, I’ve decided to make the design on the tower a spinning blade. I retook the main picture, but I’ll keep the rest the same. So just imagine that they’re different, I guess.

EDIT (2): @Jon, @IllustriousVar, @Mesonak
So, I’m rewatching the last Brainstorm, and you (specifically Meso) asked for a piece count/price point. I can’t believe I forgot this one! I’m pretty sure I put those on the rest, but I will double-check. There are 120 bricks, for $10. Also, the spinning blade thing was not even my idea, but I approved it, so I’m equal the blame. I actually think it’s kind of cool, it’s short enough to slice off some heads, and this is a training facility anyways.

So there it is, the Mangaian Training Troop. Thanks for checking this concept out, any feedback is extremely helpful, and I’ll be working on the last concept, from Kanae, in the meantime! Now it’s time to decide whether I should do a baby Gukko flight training area or a battle with a sky serpent…

I think it fits my design. I imagine this being inside of a building so for me this totally works. I also love how you use the metru thigh-armor as an ornament, I wanted to do that for a while, but haven’t foud a good place and I’m very happy to see how good it looks on your structure.

Oh man, it’s so cool that you like this! You are one of the best LDD users I know. Which, I guess, isn’t that many…

Thanks for the compliment, I guess^^

Improvement on the last. I really like the two play features.

Yes, the falling rocks and the spinning axe blades.

Oh, um… they don’t actually spin, but it’s really easy to do so I’ll do it! That is a really cool idea!

If there was a little more gold in there and a couple of mata red, it would look fitting with previous Mangai architecture, perhaps they train on the lava fields (an area covered in dust and ash from ancient eruptions) so the buildings are all darker in colour from the ash as well as using darker rock and stone to construct their buildings.

I lowkey want to imagine Sarda’s peg leg is actually a holster for some kind of knife attached to his leg. I imagine a Mangaian general wouldn’t be averse to something so unorthodox. If not that, I imagine he might weaponize his peg leg somehow.

It would be nice to have Sokoda’s colour scheme, but I think that it arguably works to a degree as well. I do love the old BIONICLE parts in the architecture.

Pretty cool. I like the function despite its simplicity adds a lot to the over all set. Which also looks pretty good

So glad you took my accidental advise.

Loving the way the buildings look. This is my favorite concept of yours so far.