So I’ve been really excited to share this.
Something I’ve been searching the internet for is Bionicle D&D sized miniatures.
So far,t his is the only instance I’ve found, but they’re fantastic. 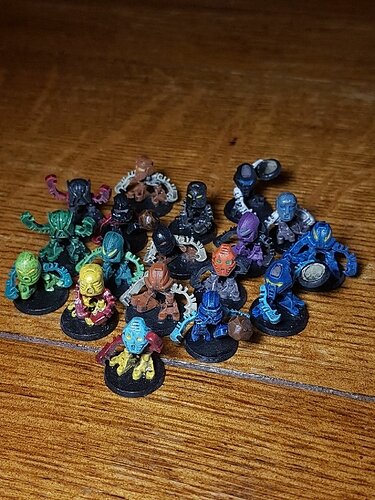 These come from a Shapeways user called Iron Foam Armory. They also have a Turaga Nokama, but when I tried to order it, the shapeways factory told me the detail was too fine to print.

They were probably right, because unfortunately, even the matoran you see here are very small, with very fine detail, and extremely fragile. Almost half of them came already broken in the mail, mostly by the arms, and had to be glued back together before I could paint them. Fortunately, The end result is pretty good, but just be warned if you think about ordering them.

So here’s the 3D render, and the product as it arrived. I bought two sets. 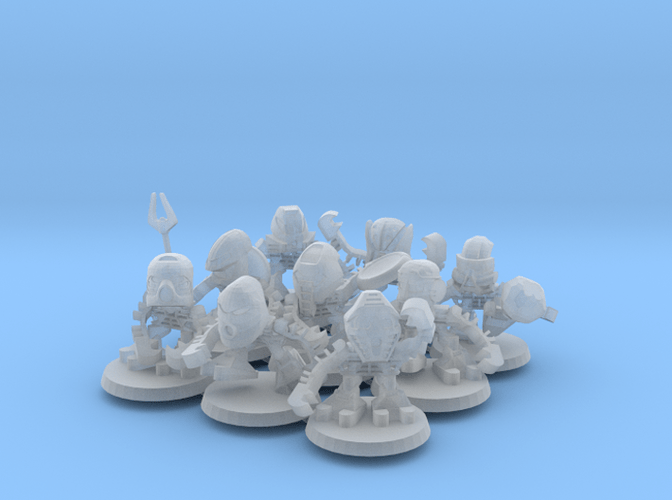 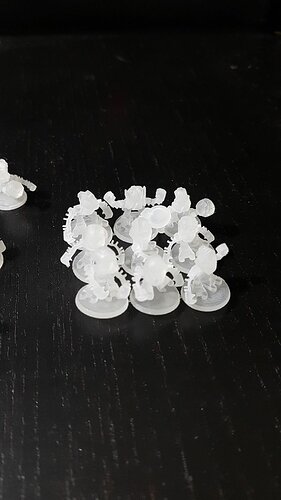 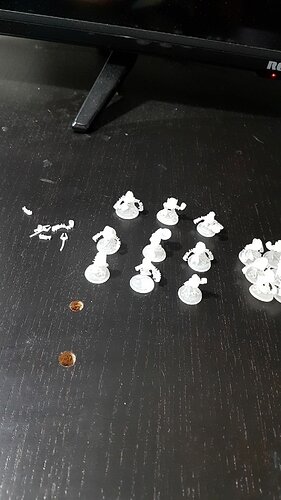 They are blank, colourless matoran in the 2001 style, specifically styled after the Mata Nui Online Game. You can see the hands styled like the flash animations as well as the mata head rather than the Mcdonalds tohunga head. Several of them have accessories molded in. There are nine in a set and the masks are Hau, Miru, Kakama, Pakari, Kaukau, Mahiki, Matatu, Huna, and Rau. There is no Akaku, Ruru, or Komau, and no other sets on this person’s shop (yet).

They are tiny. The base is half an inch in diameter. Here’s Takua compared to a standard Medium D&D miniature, and a loonie for scale. If that elf is Toa-sized, then these guys are to scale with that. 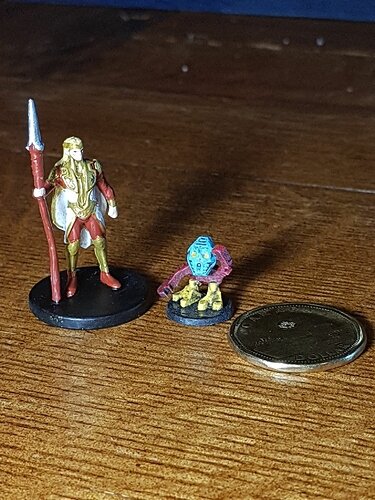 I painted all of mine after named matoran characters from MNOLG and MNOLGII. In an odd choice, No Ruru, Akaku, or Komau means no Hafu, Matoro, or Kopeke, but there are no major characters from 2001/2002 who wear Mahiki or Matatu, only minor ones.

Nuparu, Takua, Damek, Kongu, Jala, and Makuta.
Damek and Kongu both have disks on their backs. They also both had a ta-koro guard staff, like Agni, but both were broken in the package. I didn’t bother trying to glue them back on, they were too tiny and brittle. I’ve never gotten the hang of photographing tiny miniatures so they look good in the picture, but Makuta is black, with a grungy layer of rusty brown on top; kind of halfway between an infected Hau, and his appearance in MNOLG. It looks great in person I swear, but in this picture it maybe doesn’t come through. 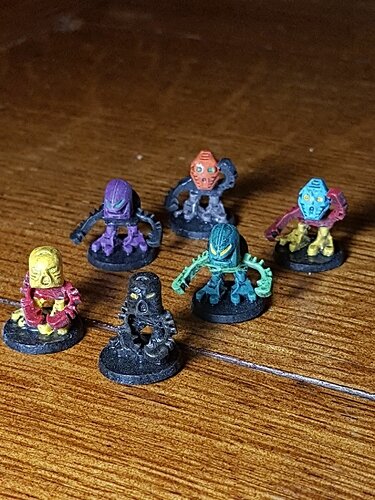 Maku, Pakastaa, Kalama, Makani, Tamaru, and Akhmou.
The Huna one comes holding a disk. Akhmou came broken off his stand. He’s only attatched by one foot, and I glued him back by both, making him stand a little differently than Tamaru. 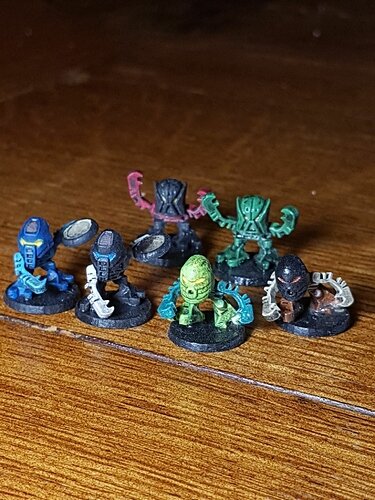 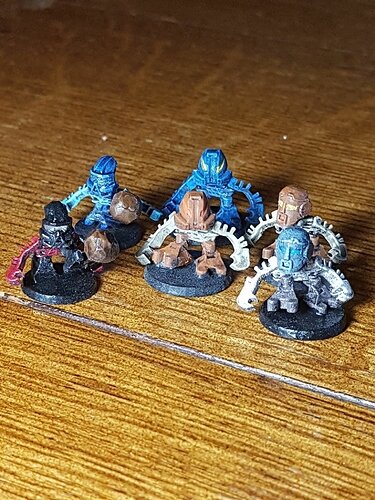 I’ll put the Brickshelf gallery with more pictures here, but you know how Brickshelf takes a while to be accesible.

Pros:
There’s nothing else like this out there right now. If Bionicle and D&D are two of your interests that cross over, this is for you. All those Shapeways accounts and modellers who make custom masks and pieces are missing out on something huge by not having done this yet. (Lookin’ at you, Red Star Forge.)
perfect detail on the masks. In fact, the arms are deliberately made to look like the flash animation, but every other part is in such fine detail, and such accurate proportion, that I wonder if they were ripped straight out of stud.io.
They’re about to scale such that if this person did make a Toa, it would be the size of a standard medium creature.

Cons:
Extremely fragile. As I said, several of them came already broken in the mail. I managed to glue everything back, but it’s disheartening to see. The arms especially are very thin for such brittle plastic. Although the detail is impressively fine and set-accurate, (Zoom in on the shapeways page if you can’t see it in my pictures) I doubt anyone but the most experienced painter (I’m pretty medium at it myself) could paint them such that those gaps aren’t filled by the thickness of the paint alone. They’re just too small, and one they’re covered by primer, paint, tone, varnish (and in this case, clear nail polish, in an attempt to make them sturdier), all that detail is drowned out. Oh, and I sure would like those other three masks. Major characters like Hafu, Kopeke, and Matoro are missing from the lineup, wheras randos like Arktinen and Makani are here because that’s what masks we have.

In the end, I still love them. I’m still starving for specifically this kind of product and would probably buy anything like it. And I still might buy another set or two to fill out the ranks (So many major characters wear Pakari) and if that means a little glueing, so be it.

I have no idea if the creator of these is in our community somewhere, but if you are, please make more! Anyone else who is into 3D modelling, if you make DnD scale minis of canon Bionicle characters, I’ll buy all of them at the drop of a hat.

I believe that the creator is Vahki6, he does some 3d printing stuff, but I didn’t know of the matoran miniatures. There are some toa minis on Thingiverse however

I would love to have a tabletop wargame based of Bionicle. I just want to play with squads of Ta-Koro Guards.

omg this is the greatest thing I’ve ever seen.

nice like them wode love som of my own

I would love to see a Toa. That’d be a dream come true.

Also, I’m going to assume that they’re so fragile because of two things. Firstly, it appears their design wasn’t compromised, and their arms are indeed extremely thin for 3D printing. If it were to be a sturdier model, the maker could stand to thicken the arms.
I also don’t see any evidence of printing sprues or supports, meaning they’re probably not very structurally sound during printing anyways.
As cool as these are, I do think their design could be improved with better 3D printing practices.

I think they should be bigger. As a warhammer player, I always prefer bigger minatures. I think masks should be a separate part letting you choose which you want on each minature.