So yep as you can see I made a mini mayhems version of my self moc, different story and such but he’s awesome! 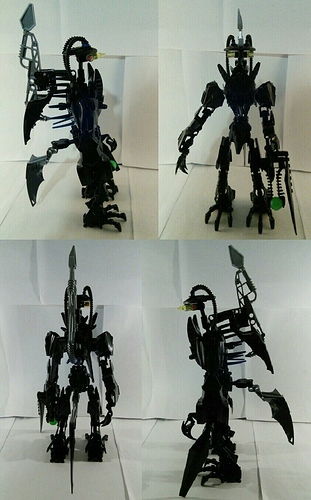 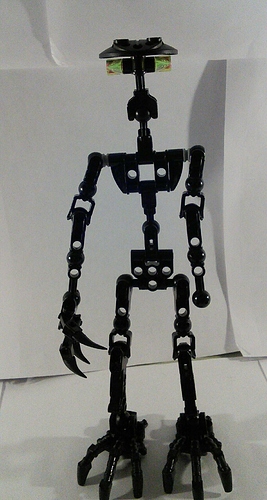 So yep I somehow made another one, who is a mini mayhem version of my selfmoc, pretty funny if you think about it, I went into this expecting to only be able to make one and I somehow was able to come out with three and this guy’s insane! Look at him! I haven’t been this excited since the original Tekan I made! I was kinda lucky I was sick and bedridden for like a day and a half it let me have the energy to make him (still sucked I was sick). The funniest bit is that this never woulda happened if hadn’t only had three black finger peices for him and wanted to keep him as perfect as possible, I mean I kept coming up with bits to add on on accident while trying to finish him up and whenever I came up with an Ida but I thought I wouldn’t be able to do it because I didn’t have the peices I’d find em! It’s awesome!
For ToaLittleboehn 's Mini Mayhem’s character entry
Ok so onto the description and such!

Tekan is an alien war cyborg. The reason the aliens made a cyborg instead of a robot was that they could be trained while growing, chemical and electromagnetic weapons had lessened to no effects on them and they were more adaptive in the field than robots. Of course they did have limited free will so they never rebelled, them being able to destroy all of their creators if they wished. The only problem with the cyborg design was the target programming, all that could be registered as to not attack was ones of their own kind seeing as were made to combat all enemies, including rebels who would hope to difficult to register, so when they do fight they go on a speed of death and destruction, destroying anything that is not another one of them until a command is sent to stop. Luckily the aliens live absolutely no where near us nor will likely ever meet us, which leads us to why Tekan is around.

Tekan somehow ended up crashed and damaged on earth, much of his coding corrupted, allowing for him to have free will but also taking away his ability to fly out of the atmosphere and only being able to be in the air for extended periods of time at what would most likely ne considered powered glide compared to flying. Much of his previous memories are damaged or hazy, luckily he still knew bout himself and such, so his best guess for how he ended up at our planet was that he was sucked through a black hole or a single use teleporter set on a random location.
He is a slightly experimental build of a flying reaper type drone, while there were a few that could fly and had back guns they were not the most common, less seen than the standard for soldier types, he was an experimental dual blastered flying build with an upgraded plasma generator, more flexible tail fin and self replenishing oxygen supply and space/underwater warfare capabilities, originally any of them that fought in space or underwater had to have oxygen tanks and thrusters attached.
Along with that he was also the personal pet project of one of the more interesting scientists of the aliens race, Silver Aquaphhire, who he actually has the clearest memories of, she helped design his form to make it sleeker, helped design his oxygen replenisher and plasma generator so they had increased output and replaced his left arm with a guided plasma launcher. From what he could tell she was also doing some modifications to his coding, possibly explaining how he gained his free will.

Personality: He is somewhat naive and slightly easily deceived butt tends to quickly pick up on it if it’s something he will not be happy about doing.
Greatly dislikes fighting becuase it’s what he was made for but will if it’s necessary, tends to try and end conflicts somewhat peacefully or by physically forcing the others to stop without hurting them to much.
Doesn’t fully understand social norms and such but is ok at it, tends to stand a touch to close to others sometimes, when asked how to deal with certain situations he’ll say that most of them involve some type of destruction and probably aren’t the best or that he doesn’t understand, seeing as how he doesn’t know much such as what cake is, or YouTube, he does know about books surprisingly enough, he can access wifi and does use it when he needs to, typically trust to learn on his own, also because he’s part robot he could probably read and memorize the dictionary in an hour, surprisingly bad at other languages though, he is great at fighting and can teach some skills.
Enjoys observing and learning and appreciates nature, having spent much of his life without the ability to, learning how it’s normal to act and trying to live life to its fullest.

Also all peices that could be back I made black I.e. all of the 2 length axles.

He talks in black fontzone.net/font-details/ar-b… font.

His weapons, placements and related: 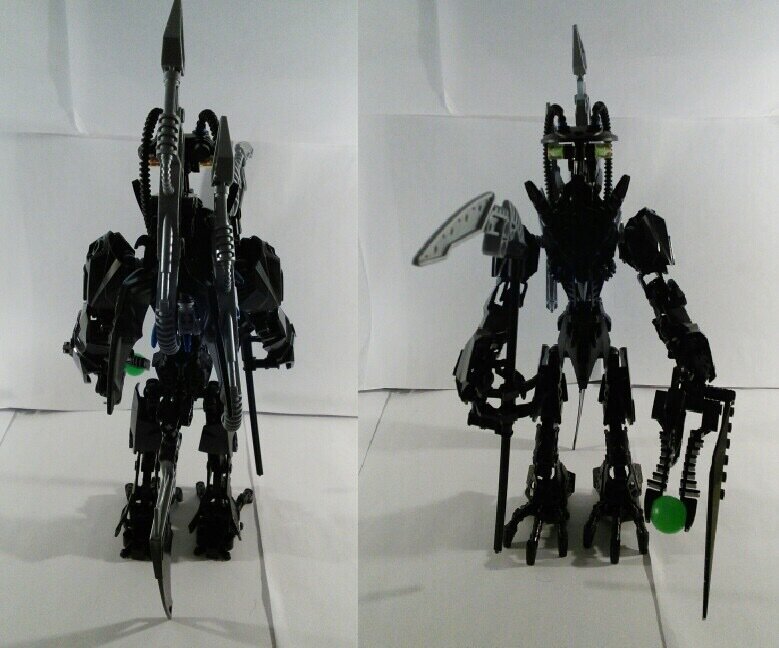 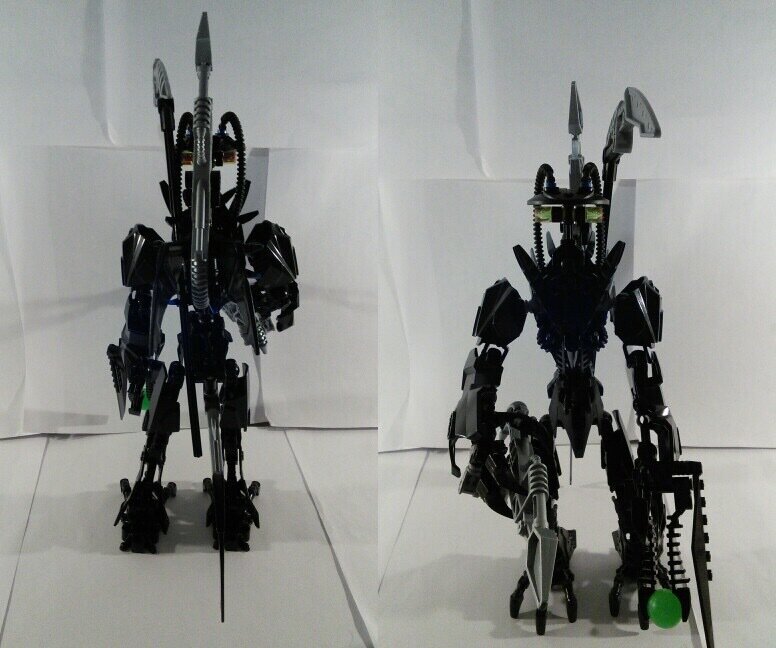 He tends to almost always have both or at least one of his weapons on himself at a time due to his previous life style, if he only has one that just means he left the other somewhere else for a bit 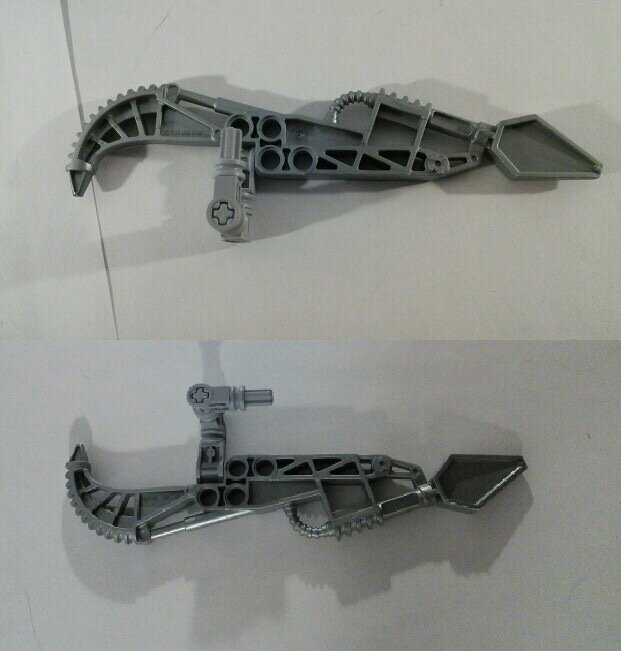 This is another reason Tekan dislikes fighting, when he gets angry enough or takes enough damage his old battle programming will take over and he’ll go on a rampage, luckily because of the corruption he’ll really only bash others around instead of killing them, so far the only one that is able to snap him out of it early is Silver.

The builds for some of the parts that you probably didn’t notice, want to know or I believed would be best to put up just in case.

Guided plasma launcher how to 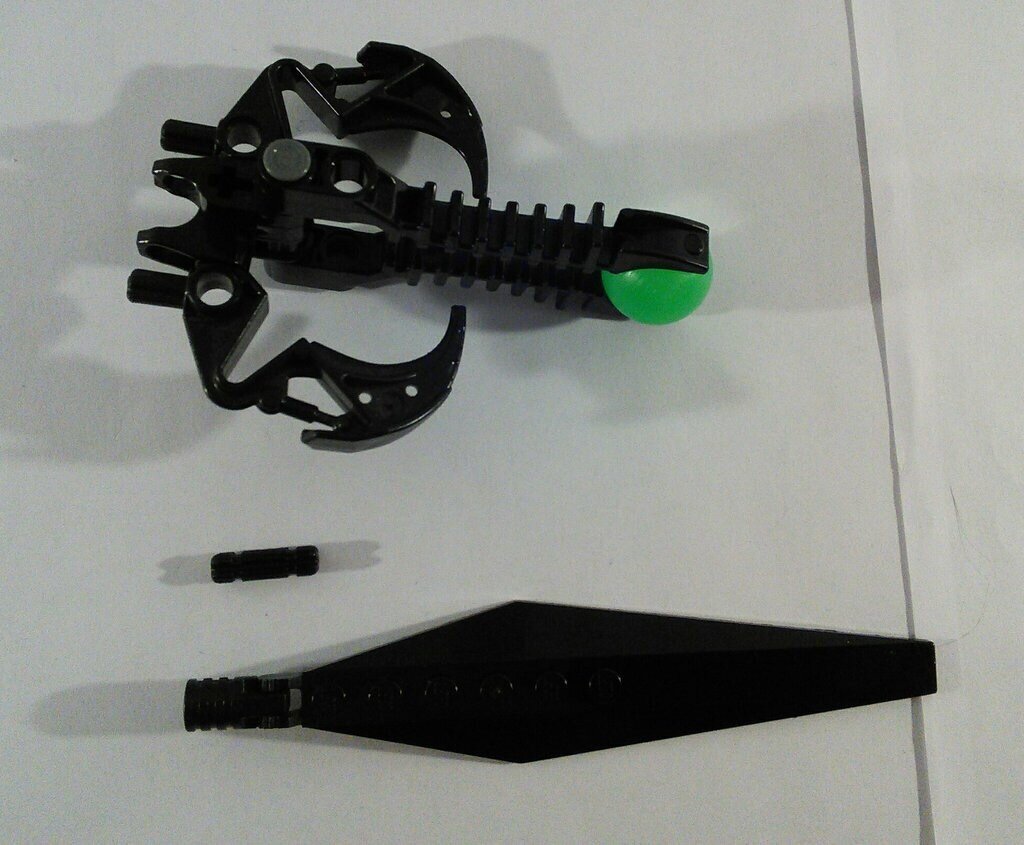 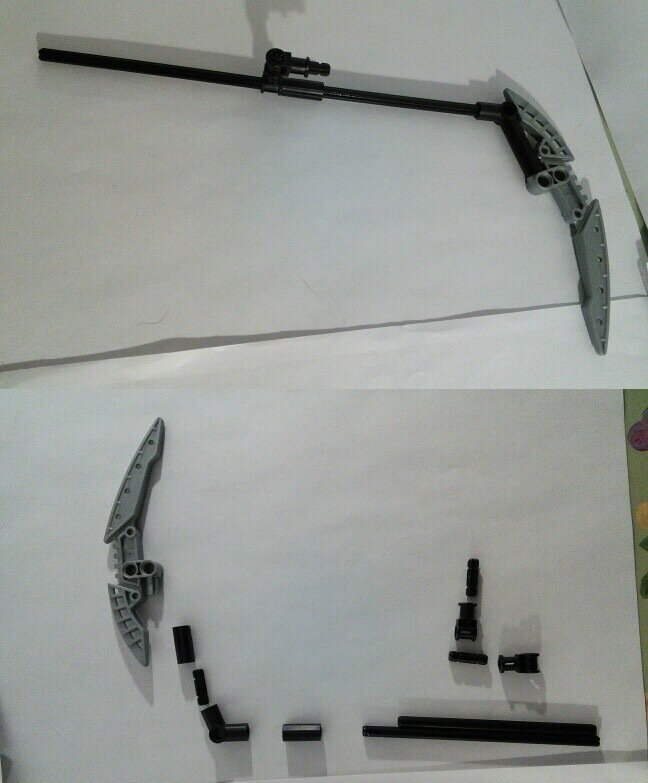 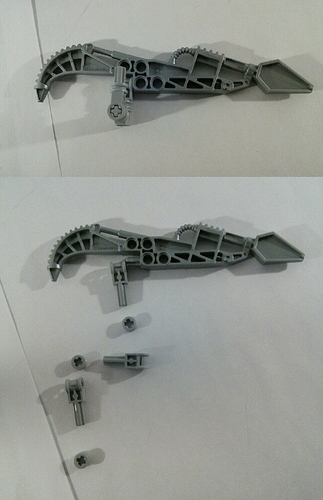 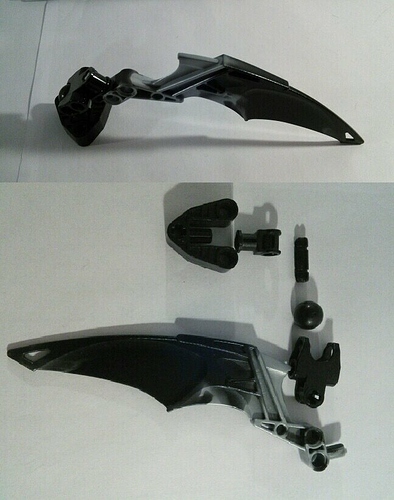 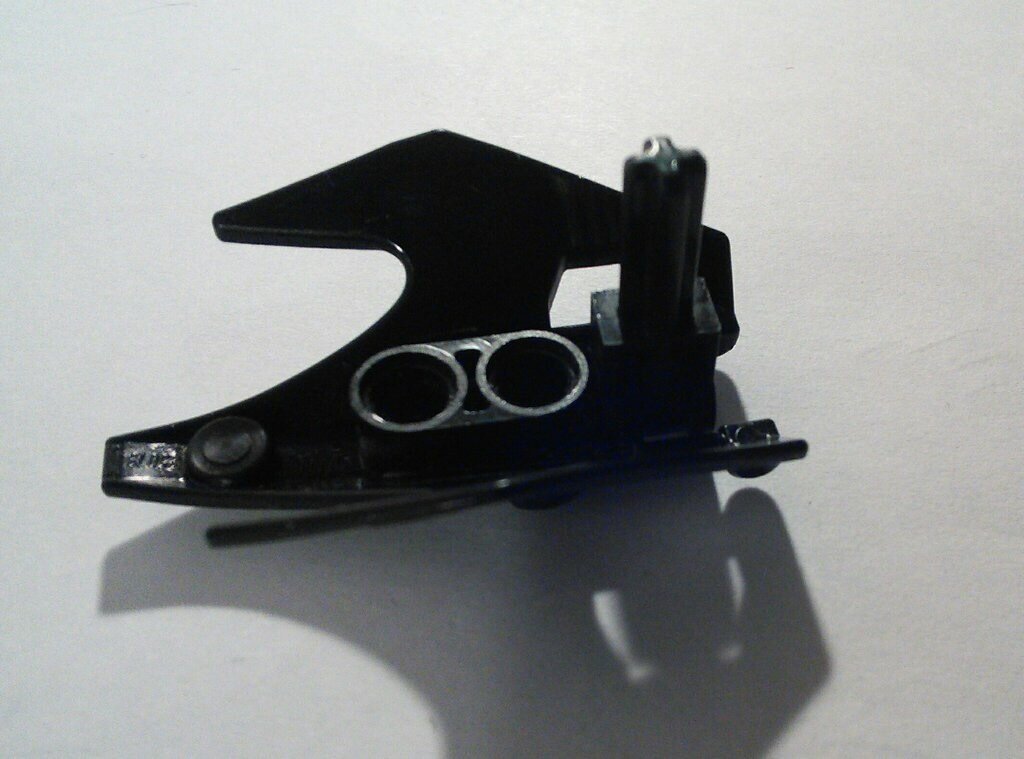 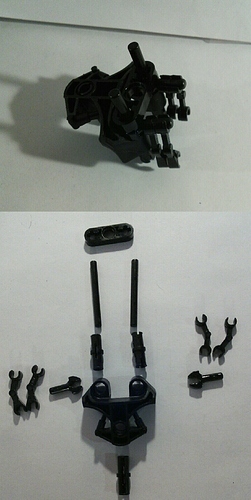 Little under bit of it. It came around after I noticed a gap and managed to fit a peice in between then got a crazy connection going and it looks so cool and stuff!!! 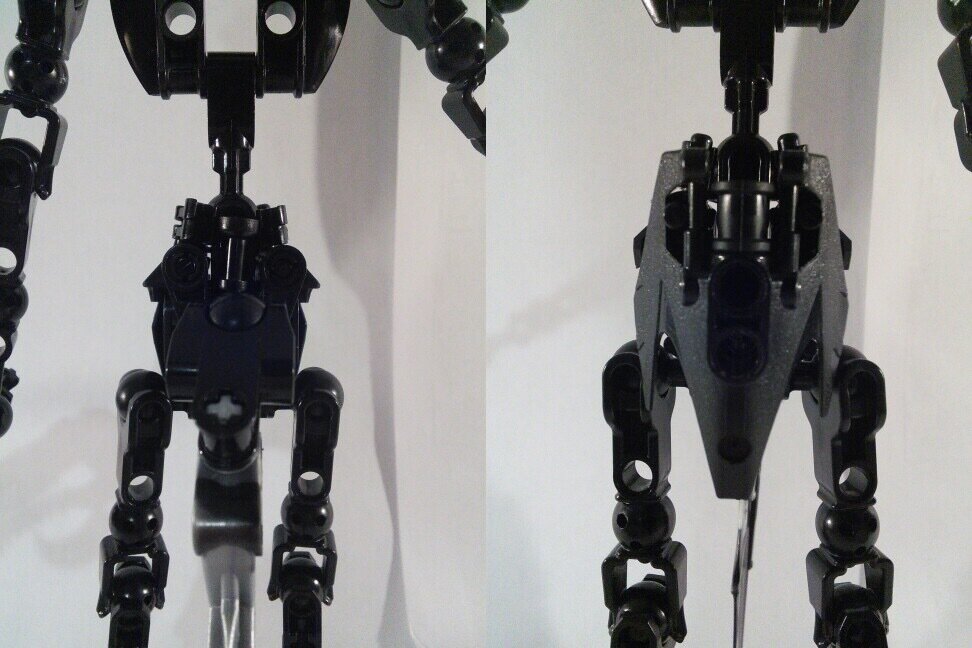 How to back laser gun 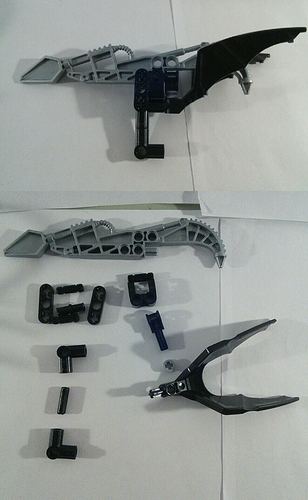 Interesting little build here eh? Funny enough I was originally going to put on a tail with the laser gun attached but to unwieldy and I remembered I needed a tailfin for the wings, I wasn’t even going to put on the laser until I was fiddling around and accidentally figured out how to get it to connect.

How to back piece 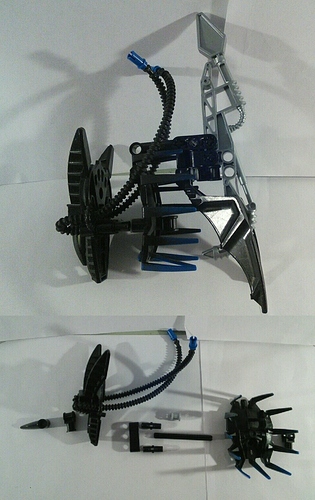 How to build the back piece. Man this thing took a bunch of random edits I kept on coming up with before it stuck but it came out awesome! It doesn’t even wobble because of how I built it! 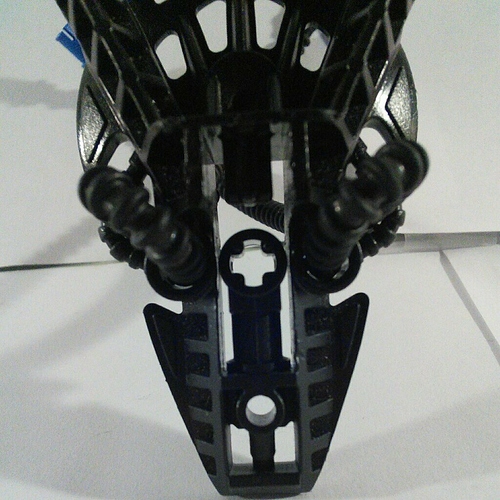 There is no way any of you saw this so here it is. Helps stabilize the peice, I was lucky enough to notice. 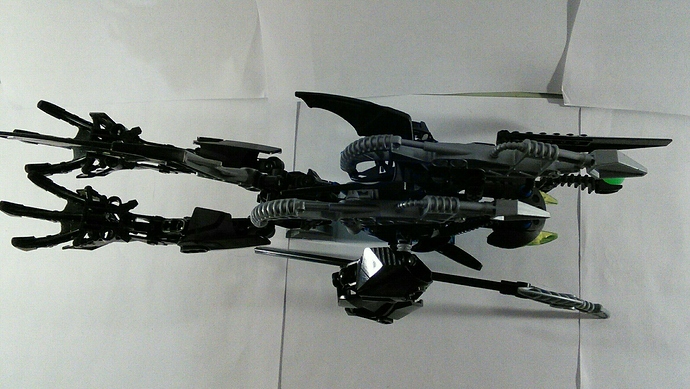 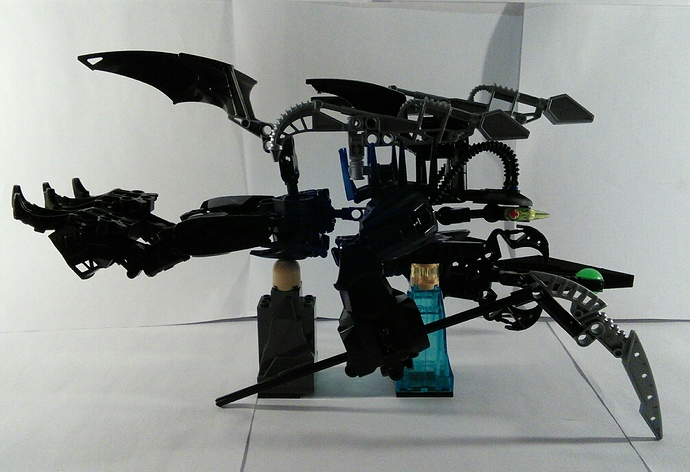 And yes I know thats a weird stand but it worked.

If you want to see the entry/contest thing and see what else has been made by others along with what he thinks of them and has built check out Kelratz.

He looks a little awkward and I really don’t like the all black color scheme, it’s really hard to differentiate part from part. Looks okay other than that, although he has a bit too many weapons.

@BBricks Actually he’s not that awkward and the black colour scheme is kinda a thing for my self Mocs. If I had better pictures it would be easier to differentiate between parts.
Also the weapons are kinda necessary, him being designed as a war cyborg (funnily enough the second plasma laser was an accident but I really liked how I could stick it to his back for dual lasers)

@JMP Ok well a staple for my self Mocs is a pretty much full black colour scheme and scythe, his back spikes do have blue tips and the reason the photos suck is because this was before I got back my light box and the first photo I’m planning to replace with better ones. Probably not going to switch out the herofactory legs because to me they work and it’s either that or digitigrade legs and I preferred these ones.
The weapons, a belt does sound nice but I don’t fully know how to make one and it would only work for the scythe, the gun already having a proper storage.

For replacing the back peice, right now that isn’t fully possible, to remove that would cause me to remove his wings, back gun and front chest plate so until I can find a better peice that still works like that I can’t, either way the spikes don’t really effect weapon storage and he doesn’t always have to be holding all of his weapons.

@Ekorak Really? I thought it worked for him, I could shorten it I guess but I don’t know how well it’ll work with his build (his neck allows for his head to be stabilized along the plasma laser connection using the Bohrok plate). It’s also mainly hidden behind his chestplate which was another reason for the length.

Also, yay! Someone commented about the tubes! Thanks, I actually came up with them on accident, just messing around with them then noticing how well they worked with his chest plate and incorporated them into his description. They actually help hold the foot and back piece to his body and it keeps it quiet stable too.

IDK man. The black’s too overwhelming. Colors would help, otherwise it seems sorta… bland? I can’t really see the details that well unless there’s alot of lights illuminating his body

About the weapons, it’s Alright to have a bunch but… you need proper storage atleast. All the weapons look like they don’t fit and/or they’re placed wrong. They don’t look quite right and I think they’re over encumbering. Maybe try putting them as a belt or have a better backpack?

Otherwise I can’t say I agree, but I’m just suggesting things to make it better

He’s got a serious case of Ek-neck. On this guy I’d also say it kinda messes with his look because his proportions are otherwise pretty normal.

I quite like the two tubes coming off his head, though. Pretty good look.