The Toa consider him as an enemy. The Dark Hunters as a threat to their operations. The Makuta as an annoyance.
His name is Scordan, sometimes also reffered to as the “Free Hunter”, an unaligned mercenary widely known for his efficiency and absolute loyalty to his missions - as long as the payment is right and he gets to work on his own.
More than once the Dark Hunters tried to recruit or exterminate him, both without success so far, earning him some kind of grudging respect even in the eyes of the Shadowed One himself.
But the Dark Hunters weren’t the only organisation to have an eye on his extraordinary skills.
Thus one day Scordan was payed a visit by an agent of the Order of Mata Nui, who proposed a place for him in a “secret organisation, opposing the Dark Hunters as well as the Brotherhood of Makuta”.
Scordan wasn’t interested. Especially the Makuta gave good payment for missions and now and then he’d also secretly cooperate with the Dark Hunters. But he didn’t mind working for yet another party. They would just have to accept, that on the next mission, he might be their enemy.
So the Order’s agent asked him, what he would want in exchange for keeping the “secret organisation” secret, while still working from time to time for it.
“What does it offer?”, Scordan asked.
At last he agreed to take over a mission for the Order once and again on separate payment, while keeping it secret in exchange for a shielded mind.

Now indirectly a member of the order, they tried to keep him constantly on missions, keeping him away from the other organisations.
It was on one of these missions, that he met his later permanent team partner Kindrix, who claims to be an Ex-Makuta. While he refused to let her accompany him at first, he soon had to acknowledge, that her powers made his missions a lot easier.

In the turmoil, that followed Teridax defeat, Scordan decided to search the ruins of what once was the Matoran Universe for valuable objects.

Powers:
Scordan is extremely skilled in both stealth and close combat. His mind was shielded by the Order of Mata Nui.

Equippment:
Scordans armor as well as sword were made out of protosteel by a Nynrah ghost as payment for getting rid of a bunch of Dark Hunters and a Vortixx, who was a bit too curious. (His blackened right arm is a reminder of the last Toa of Fire, he fought and who succeeded in hitting him with a flame blast.)
His sword is sharp enough to cut through nearly anything, though its true power is the ability to instantly collapse any kind of forcefield (like that of a Kanohi Hau, for example) it touches.
Scordans Spinner can emmit a forcefield, that does not exactly hurt his enemys, but can repell them or their missiles aimed at Scordan. If he doesn‘t let it loose, it also doubles as a shield for him.
Scordan wears a Kanohi Miru, a great mask of Levitation looted from the first Toa he defeated. It enables him to jump great distances as well as survive deep falls or avoid touching the ground at all. 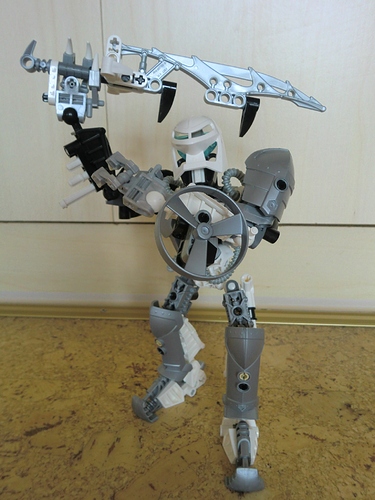 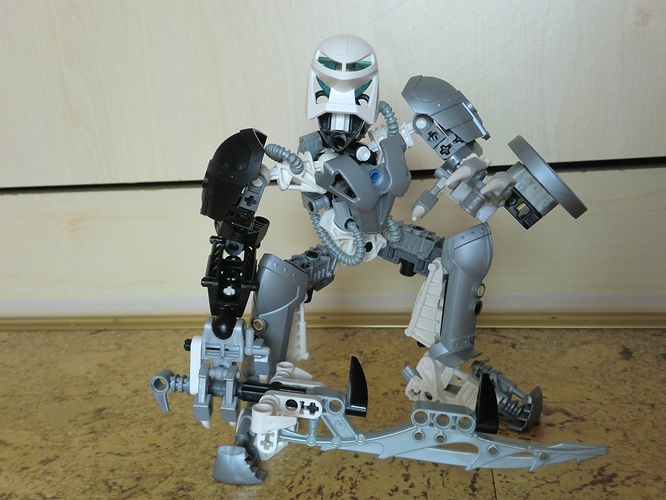 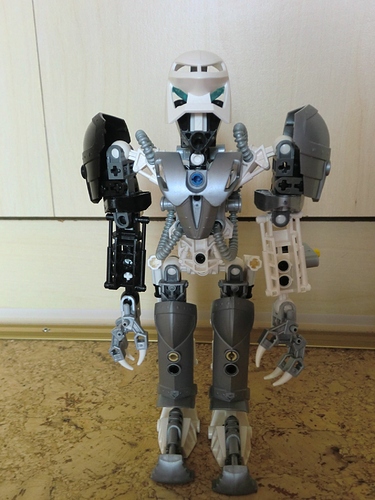 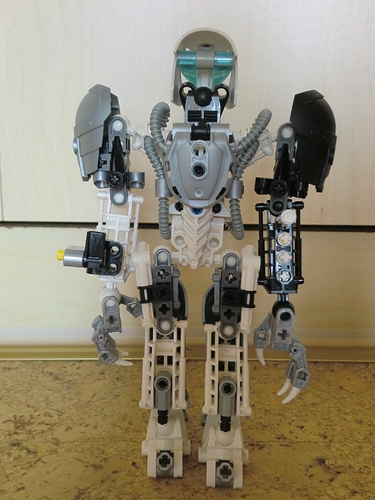 And a few words to about the MOC itself:

The head-build is actually a few years old, but I didn’t come up with a satisfying body back then. When I finally started on a body, I really wanted to use some Knight’s Kingdom armor and I have to say, it doesn’t look all that bad on a Bionicle MOC.
The hands are agreeably rather simple (this was in fact my first MOC to have fingers) and the sword could probably look much better (also the attachment to the hand is rather … awkward), but back then I was really out of parts to do much else, that would fit into Scordan’s colour scheme, so, yeah.
He’s definetly getting an update, once I have more parts left.

Here is what I think of this MOC. The build is pretty good. I like how you made a custom torso and I love how you implemented the Knight’s Kingdom parts. Pohatu’s foot add-ons are also a nice touch. I’m not quite sure how I feel about the head. Personally I would have used a ball, an axle, and a mata head. It looks like Scordan can’t look down because of the head build. It also looks like his is head locked in one position.

Now the color scheme is pretty cool in my opinion. I like the white and silver and I feel the white Miru brings it together. I kind of wish you would made the pins in the chest and legs matching colors, but I will let it slide because the chest one is obviously a heart light. Also, I love how you handled the asymmetry. It’s only in one place and it doesn’t look mismatch…except in the hands. Personally I think you should get a black hand and black exo-force limbs for the black arm.

Now about the backstory, it’s alright. Nothing spectacular, but it works. I like how Scordan is on no ones side. Although, if you do a story series for him, I recommend working on his origins (you don’t have to do that here by the way).

Powers and equipment… I feel he is a little overpowered, but that is just my opinion.

I give this MOC a 7/10. It’s alright, but I feel there is a few things you can fix here and there.

Well, thanks for the feedback!
What you said is also mostly right. Scordan’s head is somewhat restricted, especially downwards, but I really wanted his eyes to be in the lower mask half.
And about those mismatching Technic pins … yes, the one in the chest is something like a heartlight … but the main reason, they don’t match up, is because I was out of Technic pin axles at the time ; )

I will gladly remember all that stuff, when I update him!
Thanks again!