My selfmoc of the past 6 years and 11th version if I’m counting right. A bit weird actually that I didn’t post here my representative character first. =P This version is a year old, so there’s bound to be an upgrade this year, maybe in the summer. Thinking I need to ditch the pistons, bulk the knees, rework feet and all kinds of improvements. Nonetheless, he is one of my best works.

Bio: The island of Vaellus, the center of the passage of souls in the Mind Realm (created by Nediam). The ‘soul cycle’ is overseen by three deities, the Watchers, and their five children, the Wardens, who guide souls to another world. Each Warden holds power over an aspect of the mind, and can enter a person’s mind with ‘dreamscaping’, an ability that manifests the mind as a physical dimension.

Monarth, Watcher of the Sea’s son, is the Dream Warden. A beloved and second oldest Warden, his duty is guarding everyone’s dreams, as his powers allow him to expel or inflict nightmares. Seeing that a sleeper’s dreamscape is usually manifested as a night, he normally carries a staff with a crystal lantern to see his way. This staff doubles as an axe against dangers of the real world. He spends most of his time in the coastal villages where he grew up among the villagers. He is also amphibious, a trait inherited from his mother, the Watcher of the Sea, and has made a personal quarters from an undersea cave.

That about sums him up, there’s a lot more story to tell, where he discovers he’s been in a coma for three years, gained a sister, the soul cycle is messed up and so on and so forth. It’s kind of Inception level deep. Know that he’s currently on a journey in the Soul Realm and about to face off with another Warden who’s the root of the problem. The whole story is called ‘Warden’s Diary’, which I’ve been writing for two years now, though it might be a good idea to revise earlier chapters at some point. 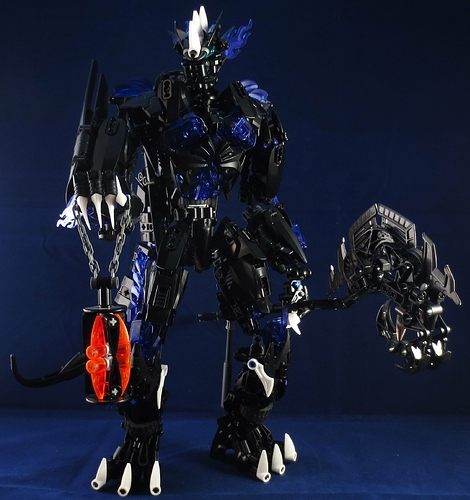 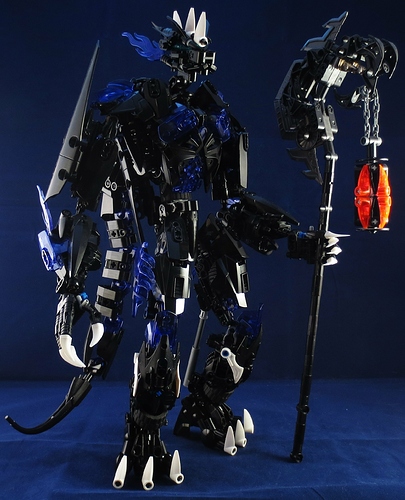 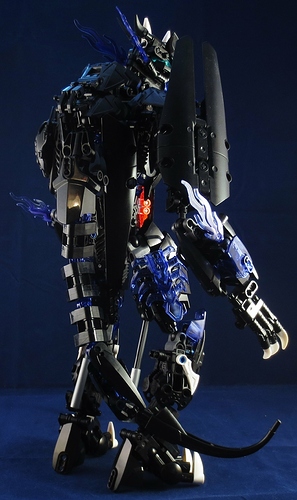 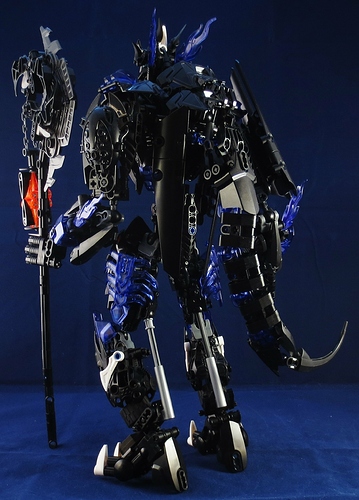 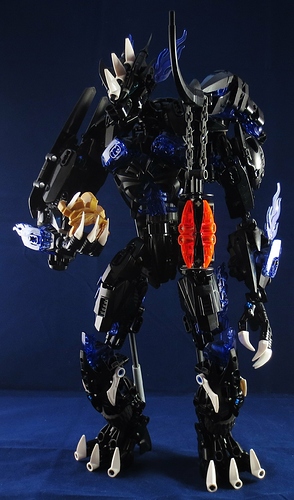 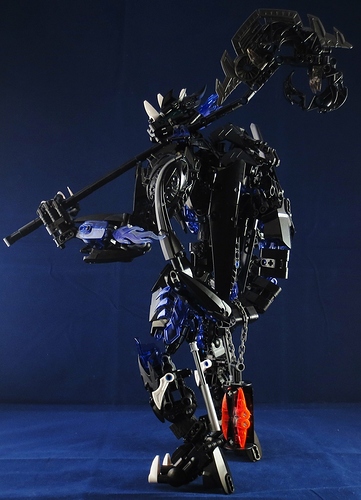 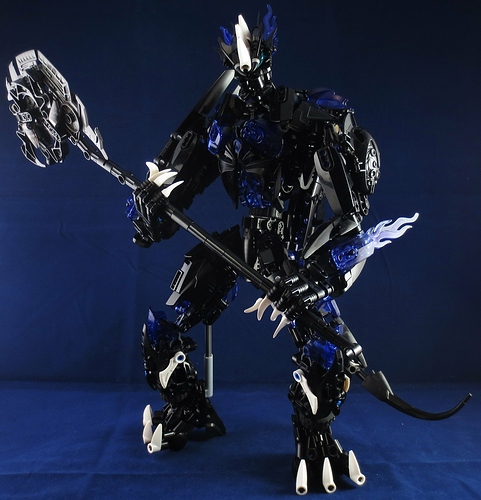 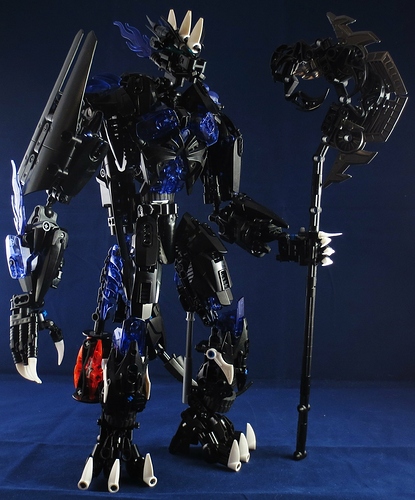 i think this looks AMAZING! don’t ditch the pistons. i think they look cool. i always like a more robotic feel to a moc.

don’t ditch the pistons. i think they look cool.

That’s gonna depend on how much support the upgrades will need. I intend to return the legs back to digitigrade, so at the very least the support system will change in assembly. If I can’t find other solutions, pistons will probably be integrated somehow.

He looks quite good, however the dark color scheme and dark lighting make sit a bit hard to see some of the finer detail.

The only thing I’m confused about is his weapon, I don’t really get why the chain is there. The rest is awesome.

This MOC looks great. Yet another fantastic example of awesome shaping. But the colors, weapons, lantern, it just all flows really well.

What he said about the lighting, otherwise this looks amazing.

@SammySpartan @Bobofoot
Yee, I was rather keen on my dark blue background then. Didn’t really care if I used it with a darkly colored moc because I liked the ambience it set, but I did put my best effort on ensuring the lighting is good. Might just be the assembly itself, the parts like to blend with each other when they’re all black. I don’t think a white background would fix that either if the moc itself has no contrasting colors.

@OraNui
Because the chain holds a lantern that hangs from the staff? He needs light before he needs an axe. The staff and lantern is the main tool, the blade just a security measure. It’s easier to carry a lantern on a staff than by hand when you need to see further. The higher the light the better.

I don’t think a white background would fix that either if the moc itself has no contrasting colors.

It’s not that there are contrasting colors, it’s that there’s virtually no color. It’s nearly 100% black. It would look better with something, but it doesn’t even have that, just some trans-purple that’s difficult to distinguish from the black and a tiny bit of trans-orange.

Yeah, that was my point. He’s black; you won’t see ‘finer details’ no matter the setup. Barely any exceptions with black mocs.

trans-purple that’s difficult to distinguish from the black

I don’t really see what you’re seeing, I distinguish the colors just fine from my pictures. Though his next upgrade might call for better color coordination, but intend to keep the ‘organic’ color blend. More dragonman and less machine.

It would look better with something

Do tell, I’d like to hear opinions on a better look.

Just add more color. Some dark green or hell, even dark red, as cliched as is it is. It will look much nicer IMO.

Yeah, that sounds really cliche, also awfully vague on how much, where and for what purpose.

Doesn’t that break his character though? He’s always been black and white, sometimes with blue and/or silver, but from the previous version I already decided those were too much.

Trans-purple has so far suited his character and organic look the best I think, so I’m mostly ready to coordinate the color scheme than change it. Clothing or armor could be a viable alternate option, but details on that are difficult.

It’s just a minor nitpick, really. Are you gonna post the story? If so, Where\When?

Time to flee in terror.

Are you gonna post the story? If so, Where\When?

As it is right now, the story is readable here. There’s a few details I wanna fix, maybe when I’m done with the story. Just one chapter left.

This is awesome, great job!

The pistons look a bit out of place without any other similar pieces in the rest of the MOC. Maybe they’d fit if it looked a bit more robotic, but as the MOC is now, I don’t like them a lot.

Great work, keep it up!

The pistons look a bit out of place without any other similar pieces in the rest of the MOC.

There’s actually two more pistons on his back, but they’re covered by the technic panels. It was a bit crude solution now that I think about it, but at the time I liked the look.

I initially designed the legs without pistons, but seeing how a friction joint on the ankle didn’t support enough plus ruined the shaping, I had to go piston route. The implementation worked, but wasn’t the best possible solution; for instance the piston is upside down, which limits the ankle joints. I really need to fix that in the next version.

Any chance of some back lighting in a photo to help the purple show up a bit more? It’s kind of difficult to see given the MOC is mostly black and the dark background. As for the design, favourite part is probably the head with the flame pieces coming from it.

Narrow knees, and the lighting is a bit dark.