Here is my first MOC. Only spent half an hour so nothing too ground-breaking. I cobbled him together using mainly Tahu and Kopaka. Whilst taking a few pieces from Furno and Voltix. I also took one from Stringer 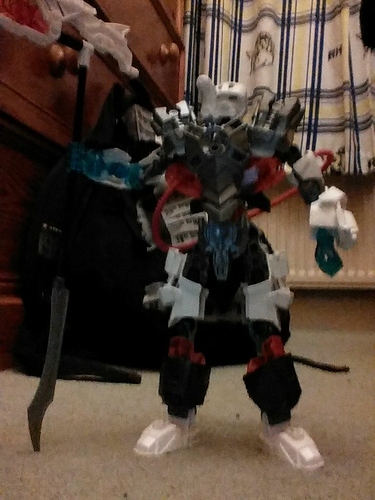 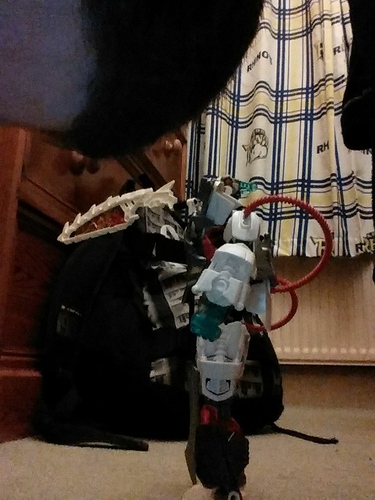 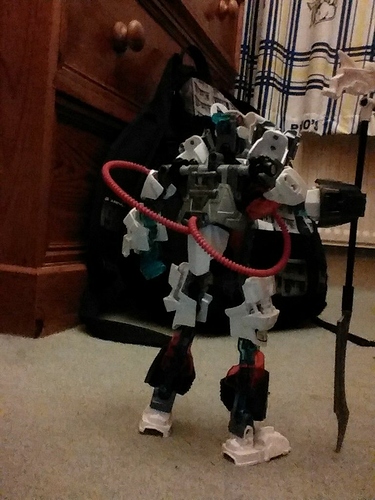 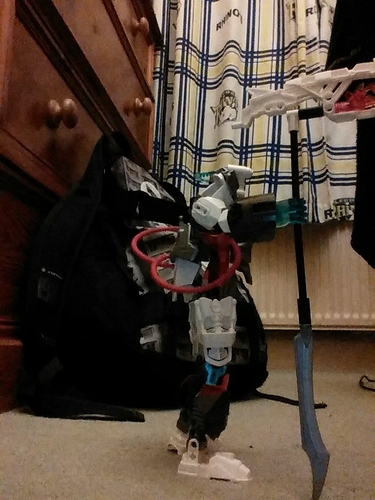 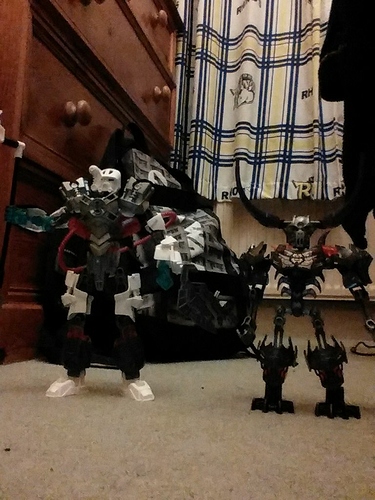 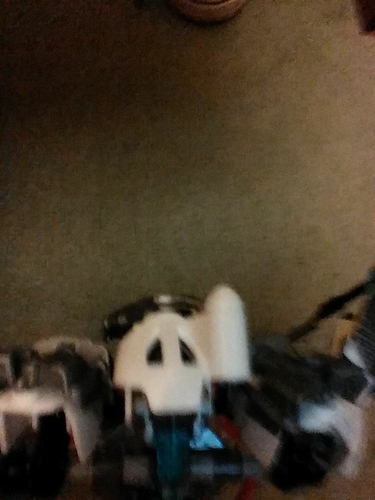 Iserif is a long gone Toa who could control fire and ice. At one time he could only control ice. But, hungry for power, he wanted to harness fire as well. He created his scythe which combines fire and ice. He attached to a back pack generator. Eventually this caused parts of his chest and legs to become raw fire elemental energy. His scythe sends out arcs of elemental fire and ice combined.

He turned on his Toa and killed them all. He then joined Umarak on his hunt for the creatures, becoming increasingly power hungry. He and Umarak caught 5 out of 6 creatures, leaving only Akida. Whilst Umarak left to search, he was left to guard the other creatures. Seizing a chance he attempted to harness their powers but they escaped, attacking and severely wounding him. When Umarak returned, he carved his head away from his body and threw his, now lifeless, into the region of waters deep depths. There they still lie to this day.

Izotor is his grandson and Kopaka is his great-grandson

Tell me what you think, and don’t hold back on criticism

Sorry for bad picture quality, kindle only has internal camera

I think the overall proportions and color scheme work really well, though there might be a bit too much silver in the general chest area. The upper back seems a bit gappy, and the stickers on the thigh shells break with the cohesion just a tad.

On the positive side, he really is well proportioned, and the armoring on this guys is pretty cohesive all around. The weapon could be better, but from what I see you’re trying to make it look like he channels the fire from a tank on his back into his weapon, thus the red tubing. It’s a pretty good MOC, though you might also want to think about making the bottom legs use silver armor. All around, good job! I hope to see more from you in the future.

Thanks, I wanted the legs a bit thicker but couldn’t as I really like the colour scheme, trans blue and red, there. If only I had the lower leg armour in silver but I only have 7 CCBS sets. You’re right about the scythe

I also wanted a white torso shell and more trans red. But overall I’m happy, especially considering it’s my first MOC and only spent half an hour on it.

You’re right about the scythe

That’s a neat little concept if I do say so myself. Always remember: your concept is just as important as the MOC itself. It’s what molds the look and overall features of your MOC.

[quote=“DiamondKing, post:3, topic:17226”]
If only I had the lower leg armour in silver but I only have 7 CCBS sets
[/quote] You could always try buying the pieces individually! That’s a good way to build up a bin.

Yeah, but I found out I like working with what I have from sets, more challenging. About back armouring, cos I used gearbox it’s hard to fully armour the back but I tried my best. A k so a bit sad the chest sticks out so much, not the picture quality to show it. So, good for a first try?

About back armouring, cos I used gearbox it’s hard to fully armour the back but I tried my best. So, good for a first try?

I’d say considering that your personal guidelines were to make a figure built off of the gearbox, you did great and did the best you could with its limitations, and the MOC itself looks really solid.

Good, have you picked up what I did with the name?

gonna be a shame when I take apart this guy, or I might improve him with new sets before doing that. If I do I’ll do an updated pic
You’re close with Ice Riff but not QUITE there

This is pretty good, but I suggest switching out the red for blue or white.

Thanks for the suggestion but once I get Tahu uniter of fire, I’m adding more trans red shells and maybe a few trans red bones. Also the red is grouped around his chest, mainly, to show he is charged with raw fire elemental power. Glad you like it, can you work out what I did with the name?

Looks like an evil Kopaka. Given that you had a limited number of sets to work with, I think your first moc came out pretty good, with a good amount of character. I look forward to more mocs from you in the future.

Very good MOC, the only issues I’m mainly noticing are the proportions, torso design and colors. Other than that, looks good

Very cool (no pun intended), the staff reminds me the grim reaper, if you change up the white to black, use one of the skull villain masks, and add a cloak, you got yourself a grim reaper moc right there

it’s great for a first moc, and I could maybe even feature it on my YouTube show Moc Monday if you want too. (My channel is: Thedanishlegodorkshow" if you are interested

Feel free to feature it on your show, I’d be honoured. Glad you enjoyed the backstory. Might change the white to black and gunmetal and make myself a cloak for a grim reaper. So that’ll be v2. So I’ll be rebuilding him tomorrow

Im happy to give you inspiration! Hyped to see v. 2.0

Ill make a video next Monday so look out!

@Gif.Man.Ben this is definitely my first MOC (my others don’t seem to be as good)

I’ve never seen your first MOC, please can you show me it?

This can’t possibly be you first MOC. It’s to good to be a first MOC.

Did I ever show you guy’s what my first MOC was?