My Mass of Mediocre MOCs 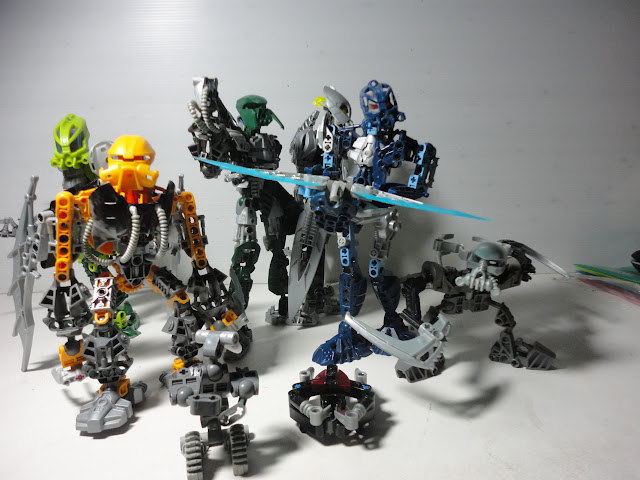 Dug out some old MOCS from my younger days.
Look at them. Shining and glorious in their mediocrity.
These were all part of a story me and my brother were constantly making as we went along, and since we had a limited part pool (colors, y'know), they're kind of lacking in the identity department.
Any one of these would give Eljay a heart attack one way or another.
Let's get into it. 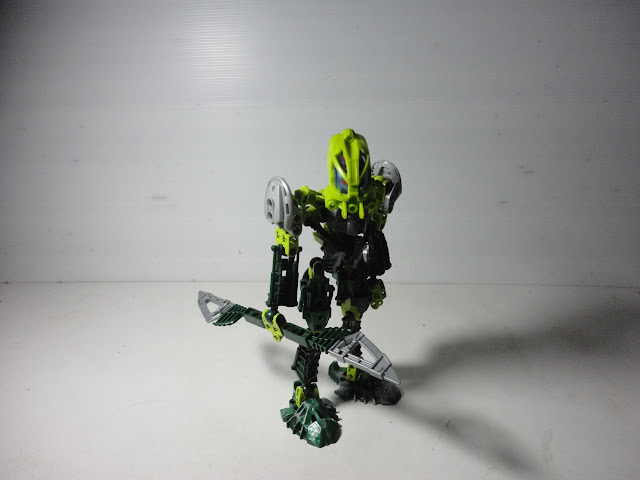 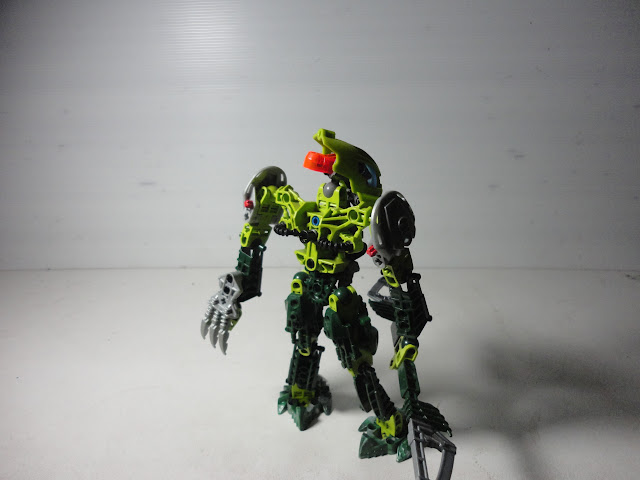 This guy wasn't relevant to our story. As a matter of fact, he's simply a redesign of Lesovikk, if you can even call it that. I just moved around and added armor, and I switched out his blade because Hydraxon's broke.

Alright. Apparently I ran out of pictures I could put in, so I meshed the little guys together.
From left to right; some drone, Venom Biter, some bat, and Grafii.
The drone was just made by meshing spare parts together, the bat is cheap, and I made Grafii as the team pet. I'll link to the galleries. 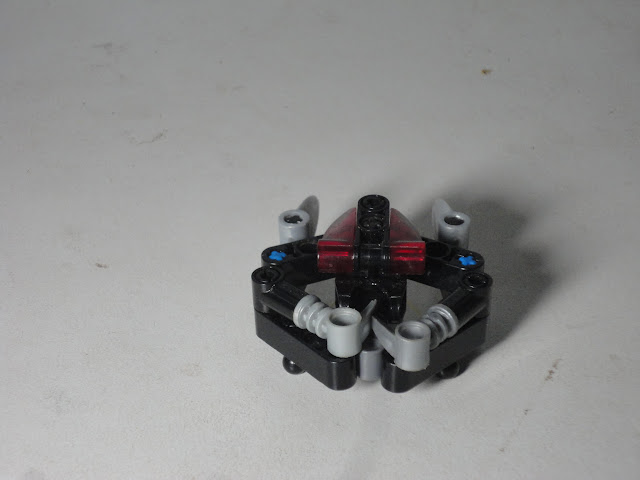 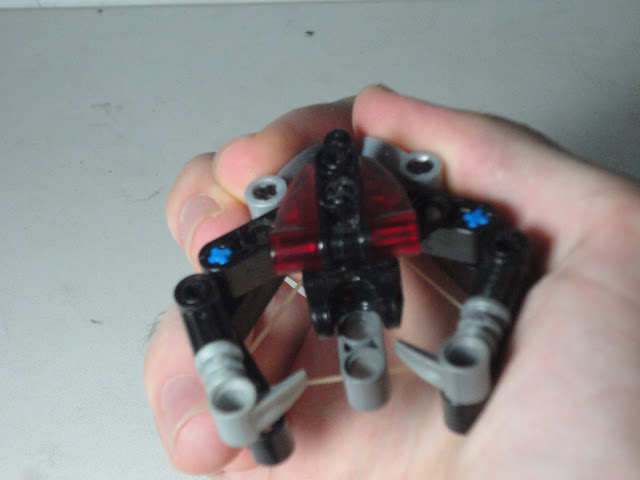 This is a venom biter. I'm rather proud of it. This is one of the first (and only) sets I made with a function in mind. It was made in the spirit of the old 01 rahi. When you squeeze those two barbs on his back, his forelegs open up. 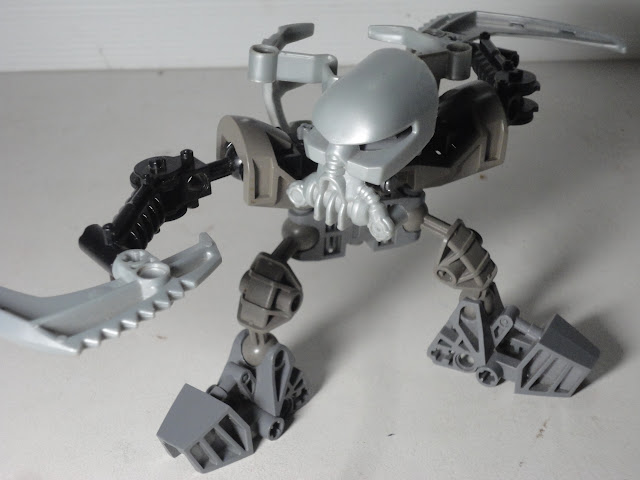 This is a voyatoran named Ranbra, who was sort of a badguy. You can't see it here, but his entire upper torso can swivel like a buzsaw. 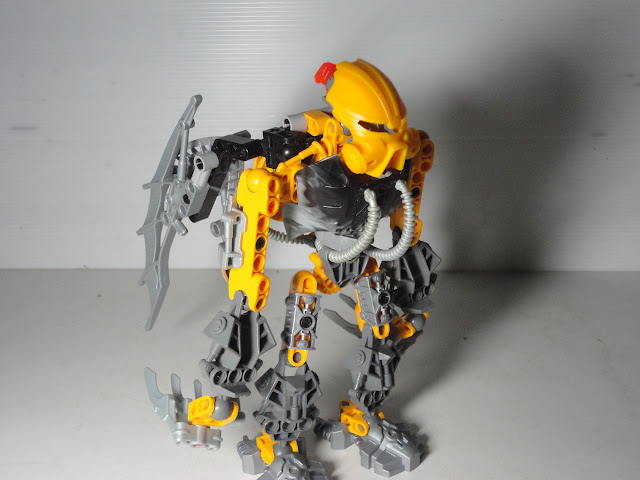 Our first Toa! A bad Toa. Touru (his name was changed. It used to be much worse) was a Fe who constantly altered his body, so when he inadvertently stumbled upon a stone and turned into a toa, his form was twisted.
Deep stuff I know.
He has this wingpak for some reason. I don't quite remember.
Oh yeah. This guy had a pet rahi bat. A cheap one. He's meant to have a mask of inanimate affinity or something. He can 'communicate' with objects to understand them. Which technically.., I dunno, gives him a mask of Biomechanics? Whatever. We came up with a lot of these masks and just switched to the official ones once we heard about them. 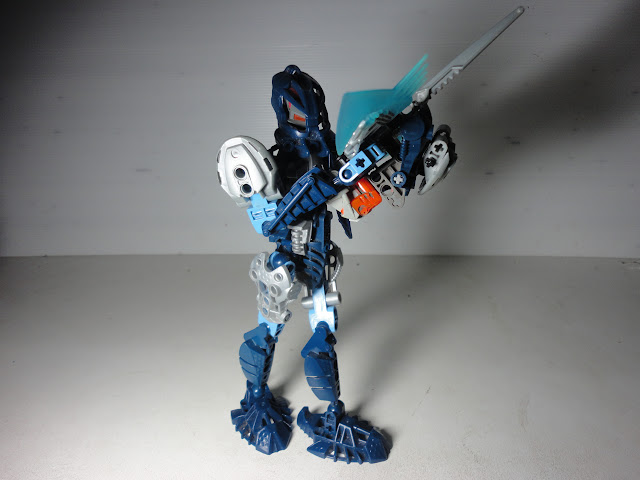 Here's Arouka. She used to be a matoran who followed Grafii and discovered another toa and eventually found a toa-stone... yada yada.
She's a vo toa with a lightning-crossbow. She can stow her bow on her back and use a dagger attached to her side as a weapon. She had a mask of Sensory Aptitude because she was a sniper or something.
We used to have a matoran form for her, but she wasn't in one piece for this shooting. 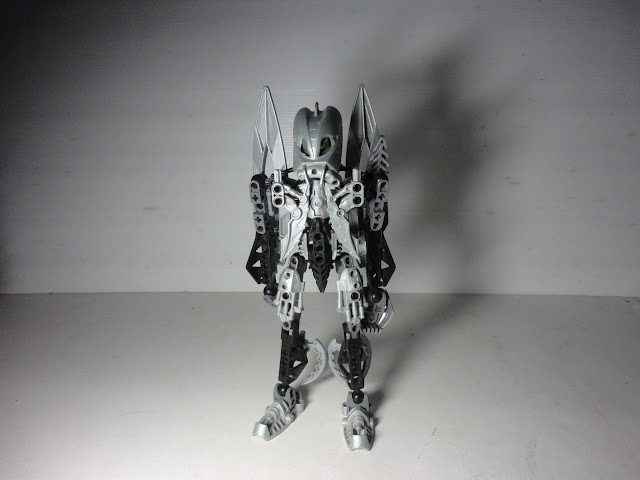 And here is... wait for it... Toa Ranbra. Dun-dun-dun... story developments... yay. Became a toa at one point and honed his skills to become some sort of assassin. Started as an enemy, eventually joined the good side. 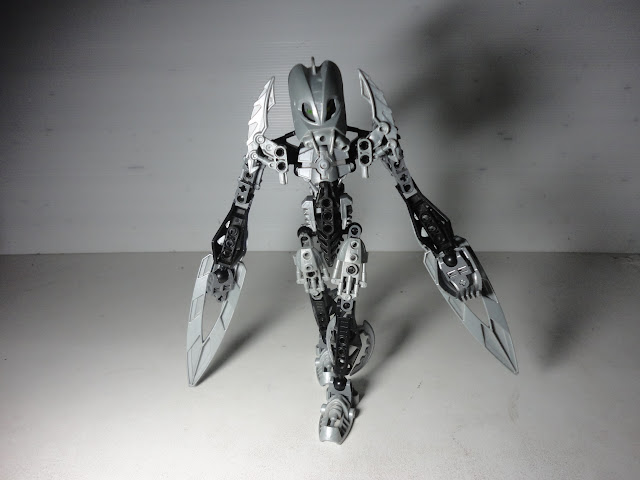 He uses a mask of Fusion (hey, his mask kinda resembles the one from the Biosector page!) to constantly keep various tools he made attached to his body. Pretty much every silver piece can be detached and used as a weapon.
He's a De who can use his tools to unleash vibrations to stun his opponents.

Oh, and he had a sword with a face on it for some reason.

This is Toa Aeyon, a veteran Bo Toa who was found hibernating in an underground grove by Arouka... or something I dunno. He wields a club.
The club can attach to his back. His right arm is synthetic because reasons. I forget. He has a mask of adaption. 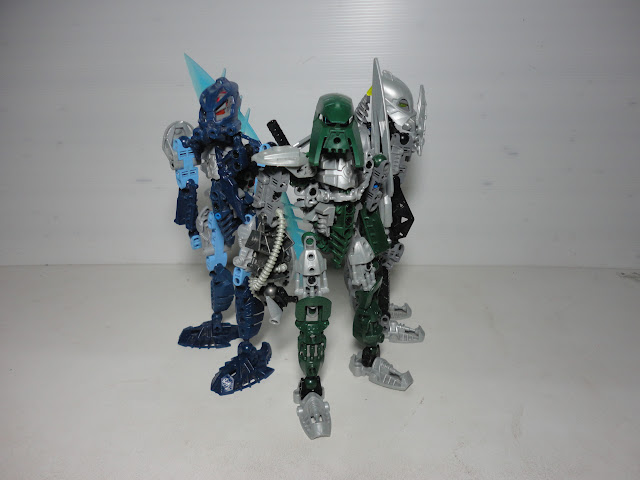 As you can see, we were lacking in masks. We all collected canisters of a certain color, so we didn't have too many options (our older brother had red and black, and he doesn't moc, so...). We did try this thing where all of the toa shared a similar theme. They had the same chest armor. Their arms were asymmetrical. They all had a handguard of some sort. And for some reason all of them had a weapon with a Kanohi-Skull on it. I think we had this idea where they could attach masks to it and power up their weapons? Eesh.
And they had some name punning going on. Aeyon. Arouka. Ranbra. Eon Arc Lamp. Or Eon, Aurora, and Umbra. Wesso clever.

This is more for the sake of posterity. I gave away most of my parts, so I wouldn't be able to change most of these if wanted to. Arouka, Ranbra (both) and the drone were my brother's.
Feel free to tell me what you think.
Here's a link to the gallery with more pictures of them.
https://picasaweb.google.com/108633661446242877072/MOCS

This reminds me of everything I built before 2013

Oh my god I absolutely love Ranbra, he's just so cool, along with Aeyon. They're all great mocs but those are my favorite. And the fact that you came up with a story line...man these mocs must mean something to you.

Thanks. They are kind of special to me.
There were more figures, but they didn't survive. As a matter of fact, a lot these have breaking or broken parts, regardless of color.

More like toa vicroen. Jk but in all seriousness these are really good

how old are you? it seems like you came into bionicle in the middle, like me, although I started younger than most people. I also made up stories because I was too young to understand the broader view of bionicle (the books, the online games...). Most of my bionicles used the inika build, and so did my MOCs. Now, with five years of technic experience up my sleeve, I decided to take apart all my old (and frankly even worse than your) MOCs, and make new ones. Now, they're amazing, compared to my old work. It's a shame you stopped MOCing, you at least got armoring. And finally, do you mind if I make a revamped version of venom biter? He looks SOOO CUTE!!

I'd rather not give away my age, but I will tell you that my first bionicles were the toa nuva, and I was really young then.
My first taste of the story was the first movie. I didn't really start buying my own bionicles until 'round 06, but I started mocing at 05 (called it combo-modeling back then).
This story first started at 07, so by then we had the biosector and a fair grasp of the expanded universe (grafii for example was originally a rejected experiment from when the makuta still made rahi and could talk).
I actually really liked the inika build because it was so easy to make poseable figures with it. These figures in particular were made around 11 and updated earlier this year.
Yes, you may rebuild the venom biter, by all means. I'd love to see how it would turn out!

I'm done. I'm just asking for your permission to call it "Omega venom biter". I'm also sorry for asking that weird personal question about your age.

Don't worry about it. Just me being paranoid on the web.
Sure, you can call it that.
No prob.