My Story: The Chaotic Calm Compendium

Well hai, and this is my first major post here! This will be a rundown of my story’s compendium, which will include links to (somwhat outdated) CBW posts with more info.

First off, the protagonists! 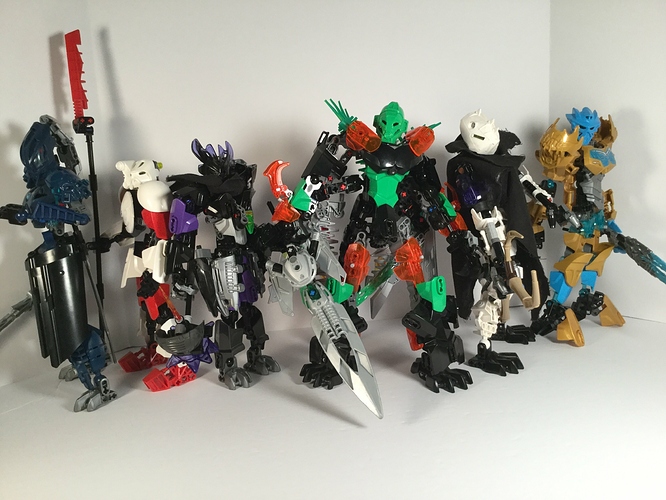 IMG_0258[1].JPG3264×2448 1.87 MB
These are the Toa protagonists, as there are just more than Toa included as main characters. From left to right we have: Masuki, a Toa of Storms, Hurricane, a Toa of Fire and Wind, Kauhanga, a Toa of Earth, Dragoneye, a Toa of Emerald Lightning and Fire and my self-MOC, Turuko, a Toa of Void, and finally Ellipsi, a Toa of the Tongues. You may be wondering what “Void” and “The Tongues” mean, but I’ll get to it soon 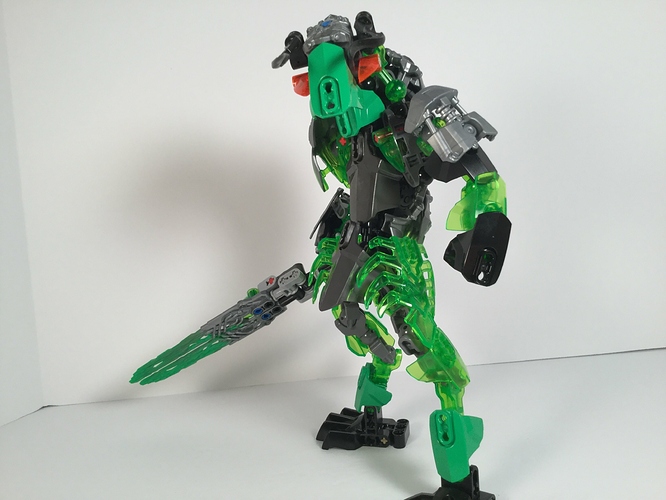 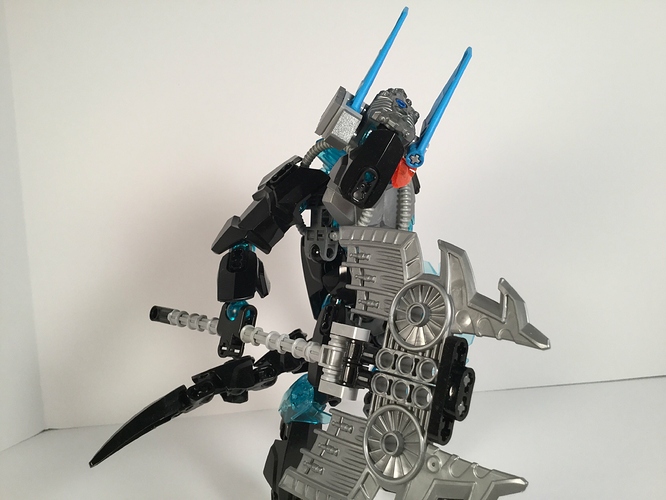 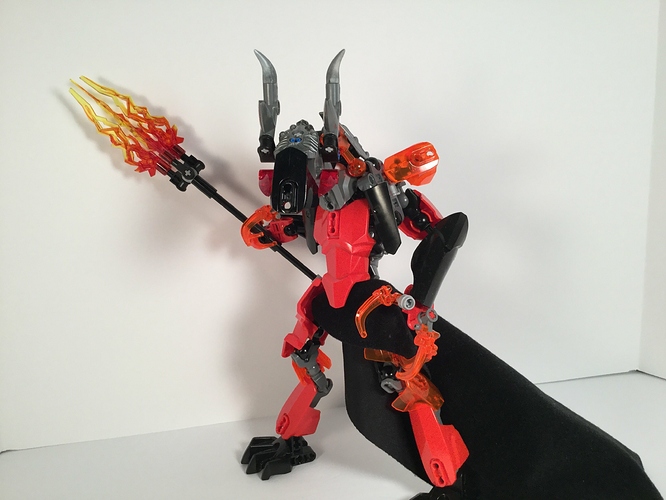 IMG_0393[1].JPG3264×2448 1.51 MB
These are the Runghiri protagonists. They are a reptilian tribal race that reside on the planet Kaidan Magna, which is where a majority of this story takes place. Click this link for more detailed info on the race. They are Kerogu (green), General Kimuka (blue), and Reguto the Insane (red), and are all part of the Kon-Shi Tribe, which are said to have won every battle they have faced. Kerogu is the chief, Kimuka is the general of the army (big surprise :o), and Reguto is the shaman. A huge pivotal point in their lives was the Idrahan Oppression, an event in Runghiri history where a militaristic race called the Idrahans invaded Kaidan Magna and enslaved the Runghiri. With Kerogu’s leadership, they fought back and forced the Idrahans to retreat to Jutlin Mina, Kaidan Magna’s moon. But, a former friend of Kerogu, Vomahki, desired to kill the Idrahans. Which segways to the Villains!!! 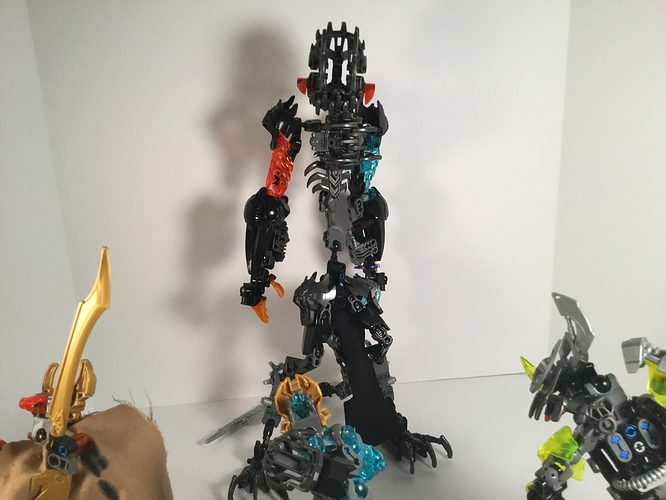 IMG_0386[1].JPG3264×2448 1.67 MB
The giant skeleton dragon guy is Azathoth, Devourer of Worlds, the Daemon Sultan, he goes by many titles, but one thing is for sure, he rules the multiverse. “Why?” you may be asking, well because HE CREATED IT!! With his wife Idrahyaa (not shown) and his sons Hastur, Nyarlathotep, and Yog-Sothoth (shown above), they make up the Great Old Ones, gods of immense power and knowledge that far surpass mortal comprehension. Azathoth has a court, filled with cosmic overlords, militaristic empires, hiveminds, and lone powerful entities who obey Azathoth’s command. They are the main antagonists of the series, and will send wave after wave of armies at the protagonists to test their mettle. 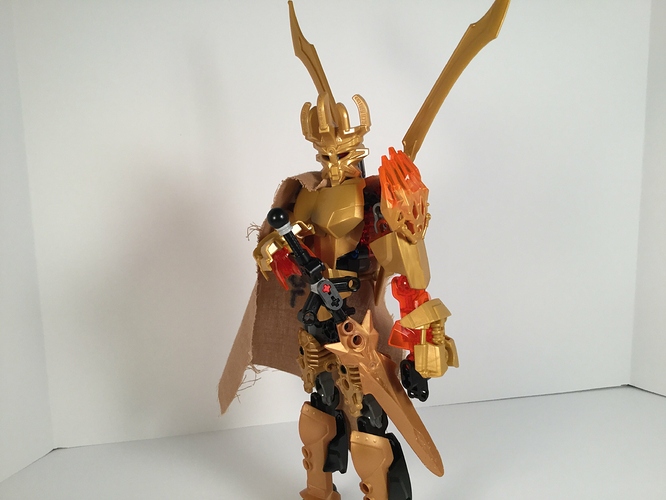 IMG_0395[1].JPG3264×2448 1.43 MB
This is Hastur, the King in Gold, Azathoth’s eldest son, and creator of stars. He is worshipped as a god of heat, fire, and war, and usually spends his time on the desert planet Sehkmet, where he enjoys downing drinks and telling stories with his worshippers. He desires to be equal with his worshippers, rather than his father’s tendency of forcing entire planets to worship him or die, and is the most rebellious of Azathoth’s children. 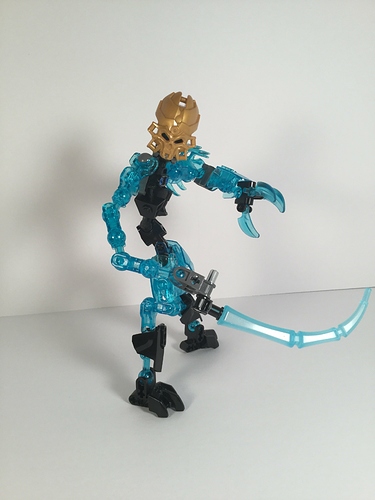 IMG_0099[1].JPG2448×3264 890 KB
This is Nyarlathotep, the Crawling Chaos, Azathoth’s second eldest son, and creator of other dimensions. He is worshipped as a god of dreams, prophecy, and the mind. He is ruler of the Dreamlands, a dimension that any sentient being can enter when asleep. Nyarlathotep is a very manipulative character, being Azathoth’s advisor and feeding his father false information to obtain gratitude. Hastur is aware of his brother’s lies and attempts to expose him in front of his father, but always fails to do so. 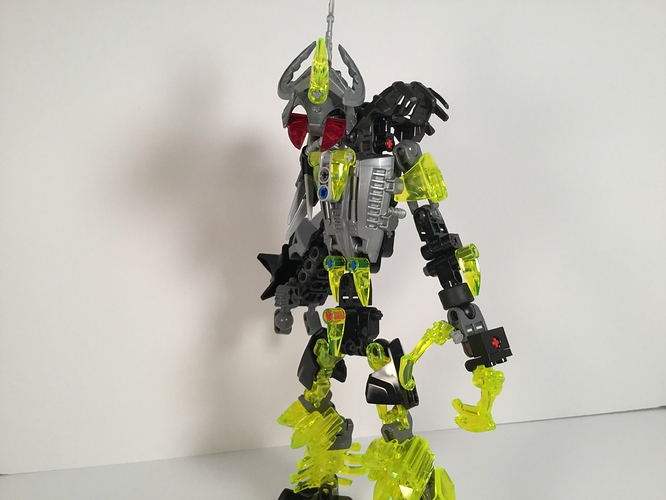 IMG_0398[1].JPG3264×2448 1.42 MB
This is Yog-Sothoth, the All-in-One, Azathoth’s youngest son, and creator of planets. He is worshipped as a god of wisdom, knowledge, earth, and protection. Yog-Sothoth is a patient and caring god to his worshippers, and was once Azathoth’s advisor, but Nyarlathotep manipulated Azathoth enough to remove Yog-Sothoth from his place. He is now the guardian of Xoth, the green binary star which is the only way to access Azathoth’s castle, and takes pride as a son of Azathoth.

His court members will play a more important role in the later Stages. And here are some: 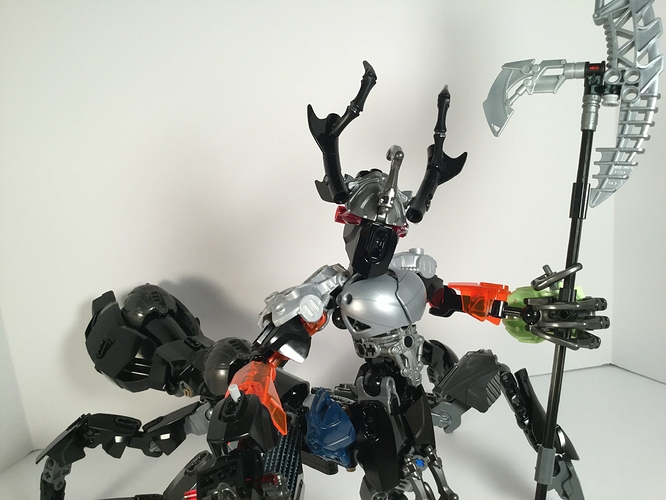 IMG_0399[1].JPG3264×2448 1.68 MB
Queen Miraj, also known as Atlach-Nacha, is Queen of the Collective, a hivemind of insectoid-like soldiers who assimilate other lifeforms into its army. 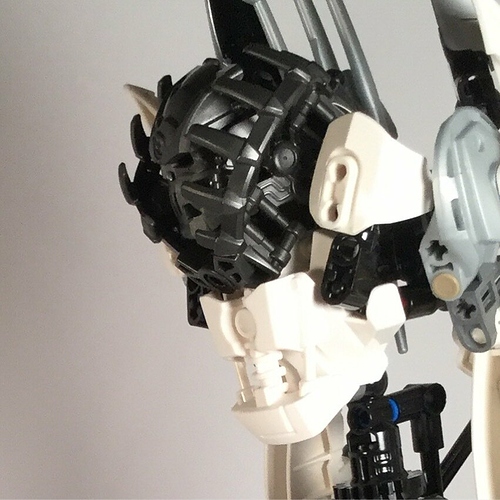 IMG_0123[1].JPG851×851 136 KB
Anima is an Elder (will get to that soon too) and commander of the Soulless, a race of undead creatures only he can create and control. He is a powerful being and a high ranked member of the Elder Council. 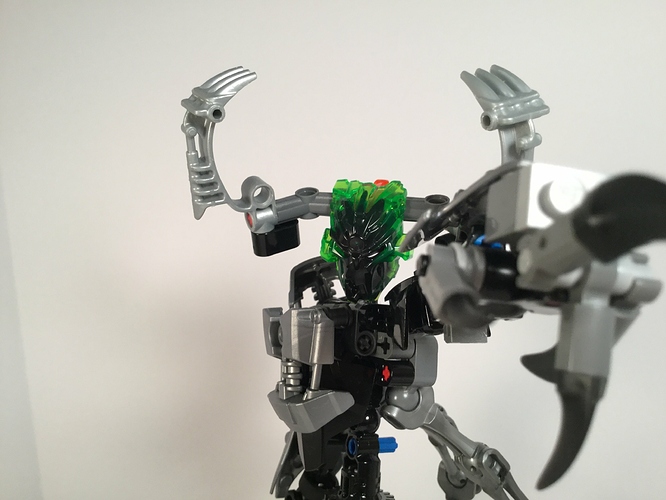 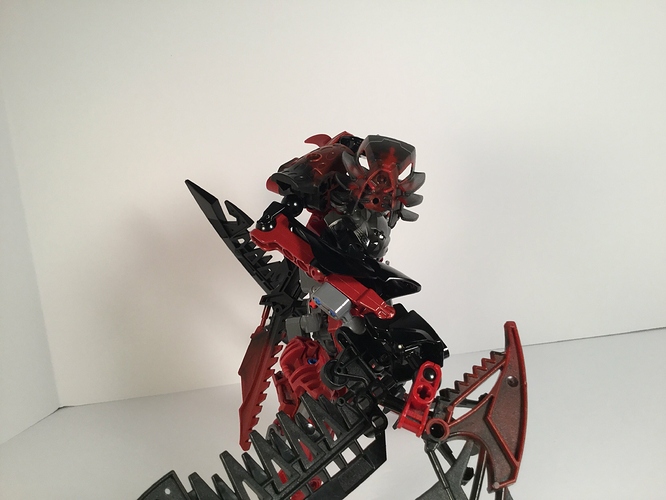 IMG_0400[1].JPG3264×2448 1.46 MB
Kamaz is a bat-like interdimensional servant of Arxix, an Aeonyx that resides in the Otherworld, a mirror realm of sorts. He is malicious and desires to drink the life essence of all rebels. 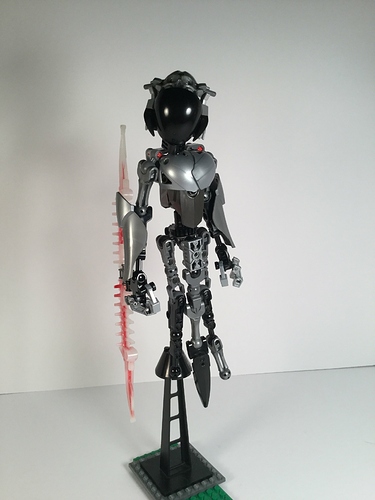 IMG_0188[1].JPG2448×3264 1.42 MB
Psyche is an Elder and manager of the Asylum, a dimension where prisoners and test subjects are imprisoned. She is cold, yet soothing at the same time.

More members that have not been made include Legion, Mordina, Sanctus, Emperor Sulla IV, the 3 Beasts, Ithaqua, or the Priests of Sehkmet (they will be coming soon)

Now to bring up some important things I mentioned before. First, the Tongues!

The Tongues is a language and element created by Azathoth. It functions like the Dragon shouts from Skyrim, except that practically anything can be performed by using it. More info here.

Void is an element that stems from the Nameless Mist, a sentient nebula that randomly spews out entites. Toa of Void harness its energy to create constructs (like Green Lanterns).

The Elders are a race of wizard-like beings that are created to obey Azathoth. They are masters of performing magic, and primarily commit genocide, wiping out races Azathoth deems unworthy.

Cthulhu is also a prominent character. He was a Great Old One until he was exiled and then defeated by his uncle Hastur. Cthulhu, along with Cthylla, rule R’lyeh, an underwater city filled with nautically designed R’lyehians and is the home base of the Order of R’lyeh (big shocker :o).

Nodens is a being that isn’t a Great Old One, but behaves like he is (I.E. having avatars, able to travel through dimensions without aid, etc.). He is a hunter god, mentor of Turuko, and has an open hatred for the Great Old Ones. He is the one that murdered Azathoth’s stillborn daughter Shub-Niggurath, and still resides in R’lyeh with Cthulhu.

Azathoth also has a vault filled with mystic and enchanted items. Info on the Vault of Xoth here

So that’s a majority of things in my story. If you have any questions, please ask. Found an error? Let me know!

I see someone here likes their Cthulhu. “The King in Gold” indeed.

Oh yes I do my friend! I’m hosting a contest on Instagram for making members of the Order of R’lyeh. If you want to participate, the details are on my page @toa.dragoneye

I’ll admit, his torso is really weird. But, I might do a revamp of it, as I haven’t gotten much criticism on him, so when I see more suggestions, I’ll revamp it. Thank you very much!

Cool, I like the look of Hastur and Nyarlathotep the most.

Very good! All of these MOCs are very well made and unique in their own manner, with one exception- Azathoth. His body is far too long and skinny in comparison to the rest of his body. It doesn’t really work that well.

Yog-Sothoth and Azathoth, hmm? Sounds like somebody has been reading HP Lovecraft. But where is Zoth-Ommog?

Wait… the order of R’yleth? Is that something added by later authors? Or is that what your characters are a part of.

Wait… the order of R’yleth? Is that something added by later authors? Or is that what your characters are a part of.

I made it up, but something like it may exist in Derleth’s or Smith’s stories.

Very good! All of these MOCs are very well made and unique in their own manner, with one exception- Azathoth. His body is far too long and skinny in comparison to the rest of his body. It doesn’t really work that well.

Thanks. I understand why the complaints about Azathoth. And Zoth-Ommog is kinda dead, along with Bokrug and a majority of the others. Zoth-Ommog was killed by Cthylla and from his dead body she made her spear.

Huh. I don’t remember that. During which story did that take place?

He’s dead in my story. In Lovecraft’s, he isn’t. It’s just a way to explain why I don’t have many of the Great Old Ones or Outer Gods in my story.

I made it up, but something like it may exist in Derleth’s or Smith’s stories.

Eh, I’m an orthodox cultist. I don’t really like the additions of many later authors, like the “War in Heaven” or elemental affinities of GOO.

That’s fine. Personally, I liked how Derleth fleshed out the Cthulhu Mythos and added to it. However, others besides Derleth I’m not very fond of.