My take on Omega Tahu 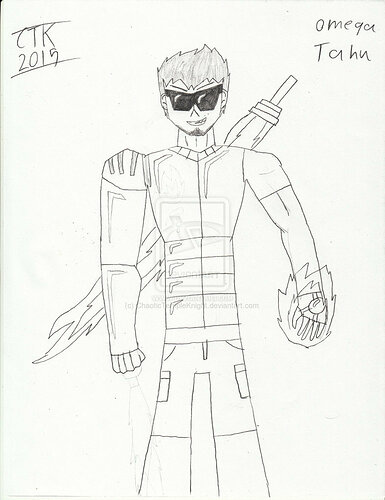 I’m going to be honest, I’m a bit tired of the Hau slapped on a crudely drawn muscular body for the human form of Omega Tahu. Don’t get me wrong, it’s funny, but it is getting old in my opinion.

As you can tell, I am not joking around. I actually wanted to draw this (and I did). I suggest checking this out on DA as I don’t feel like typing out the description on DA here. http://fav.me/d8eyvy2

And since you probably don’t know what a quick sketch is, here is the first description of them ever: “Now don’t expect the greatest picture ever when it says “Quick Sketch” in the title. these are just real quick drawings that I will most likely re-draw later on with good quality.” Another part of this is that if I did a good enough job (in my opinion), I will most likely color it on a later date.

The chances are good for me coloring this at a later date. 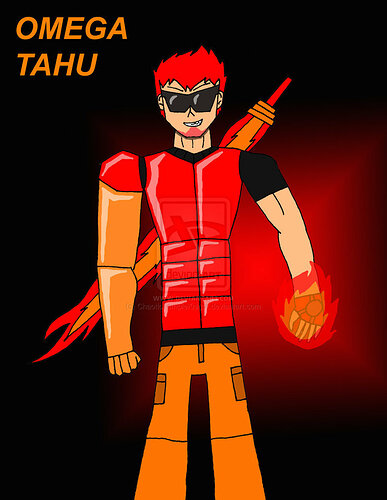 hey look, I colored it!

Check out the description on DA: http://fav.me/d8ezi92 because I don’t feel like typing it out here.

Given you’re open critiquing of someone else’s drawing, hopefully you wont mind someone giving some small critiques and advise on yours.

While the general idea works and humanising Bionicle figures can be done, I feel it needs more details that are reminiscent of the figure you are trying to portray. Other than the flame sword he doesn’t have any aspects that make me view him as Tahu.

Granted you don’t have to change the design as the drawing works well for any other character, I just feel for Tahu it should have more Tahu aspects. While the ‘Hau slapped on a crudely drawn muscular body’ may not be 100% perfect it has the Hau to announce to anyone looking at it that its meant to be Tahu.

A few ideas could be a face mask, a hair style that is specific to each of the elements or have them in a pose that represents their element or replicates something from their past (Such as Pohatu as a footballer to mirror his kicking of a large rock) Inspiration can be found by checking the Bionicle Re-Birth Chronicles if you are interested.

Thank you very much for your feedback. I have a feeling that once I color this, it will look more like Tahu, But I will definitely keep what you said in mind.

Well I didn’t intend it like that. Maybe I should of worded my description differently…

This is an interesting take on him. It’s different, but not in a bad way.