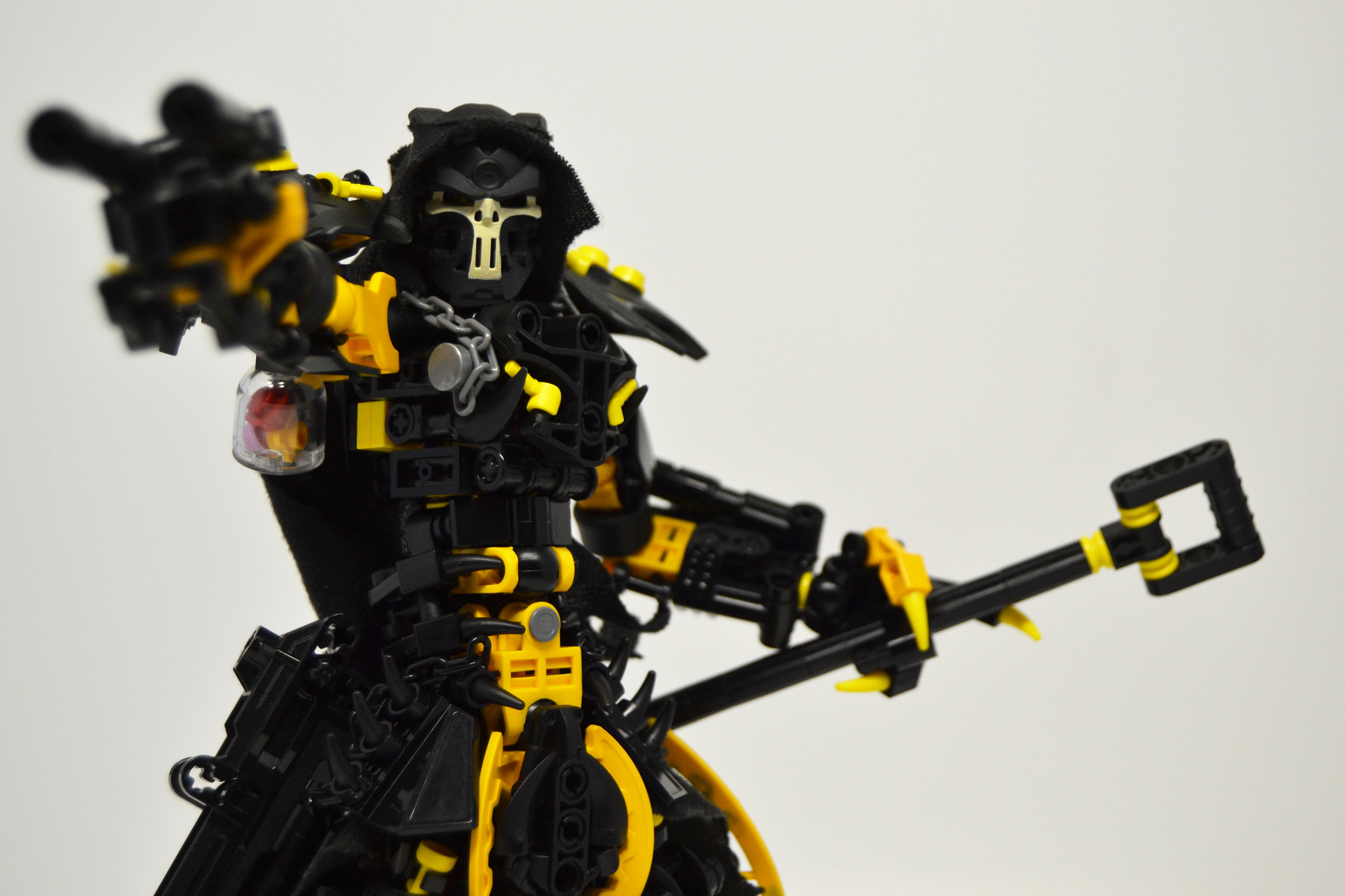 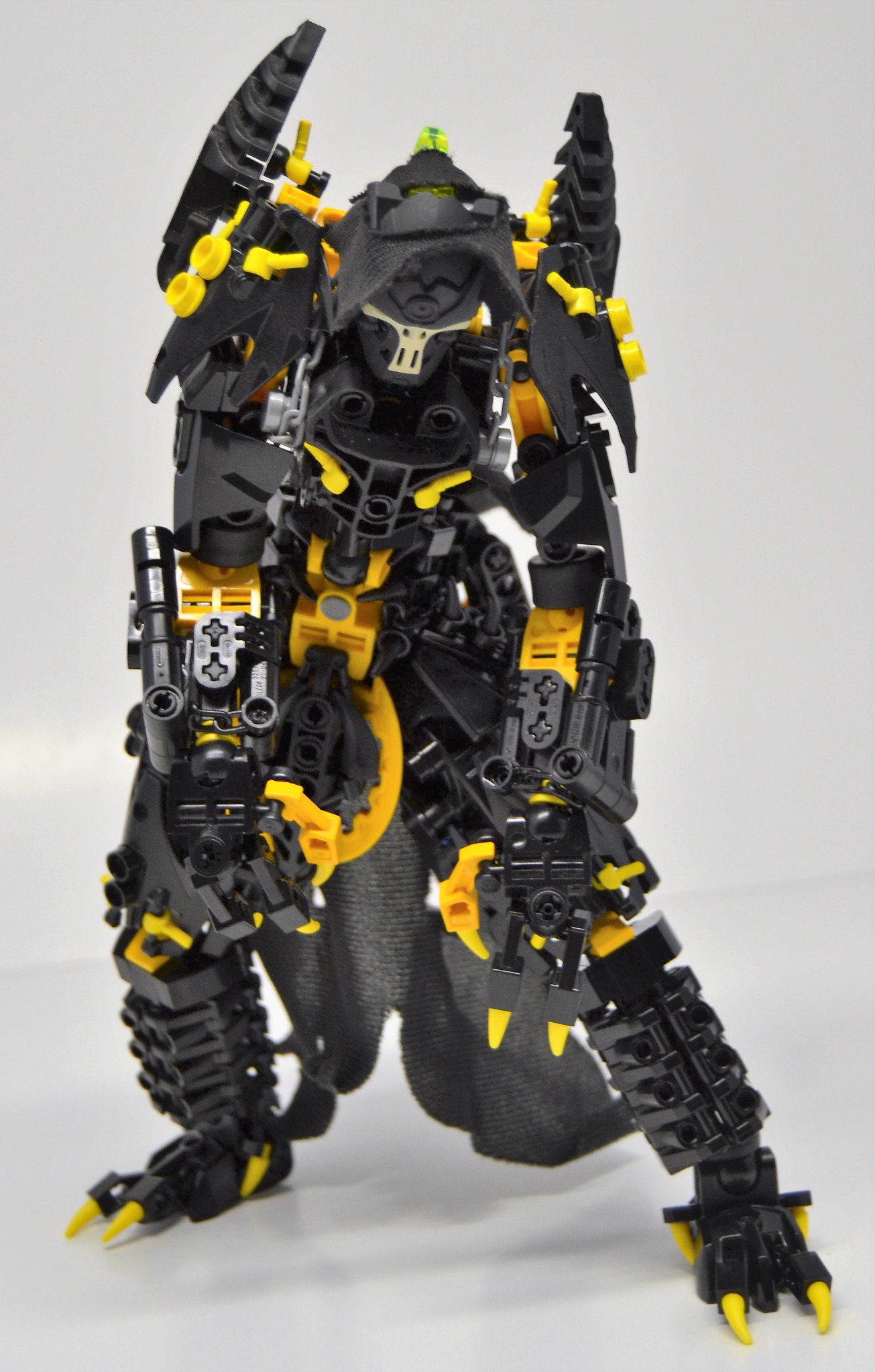 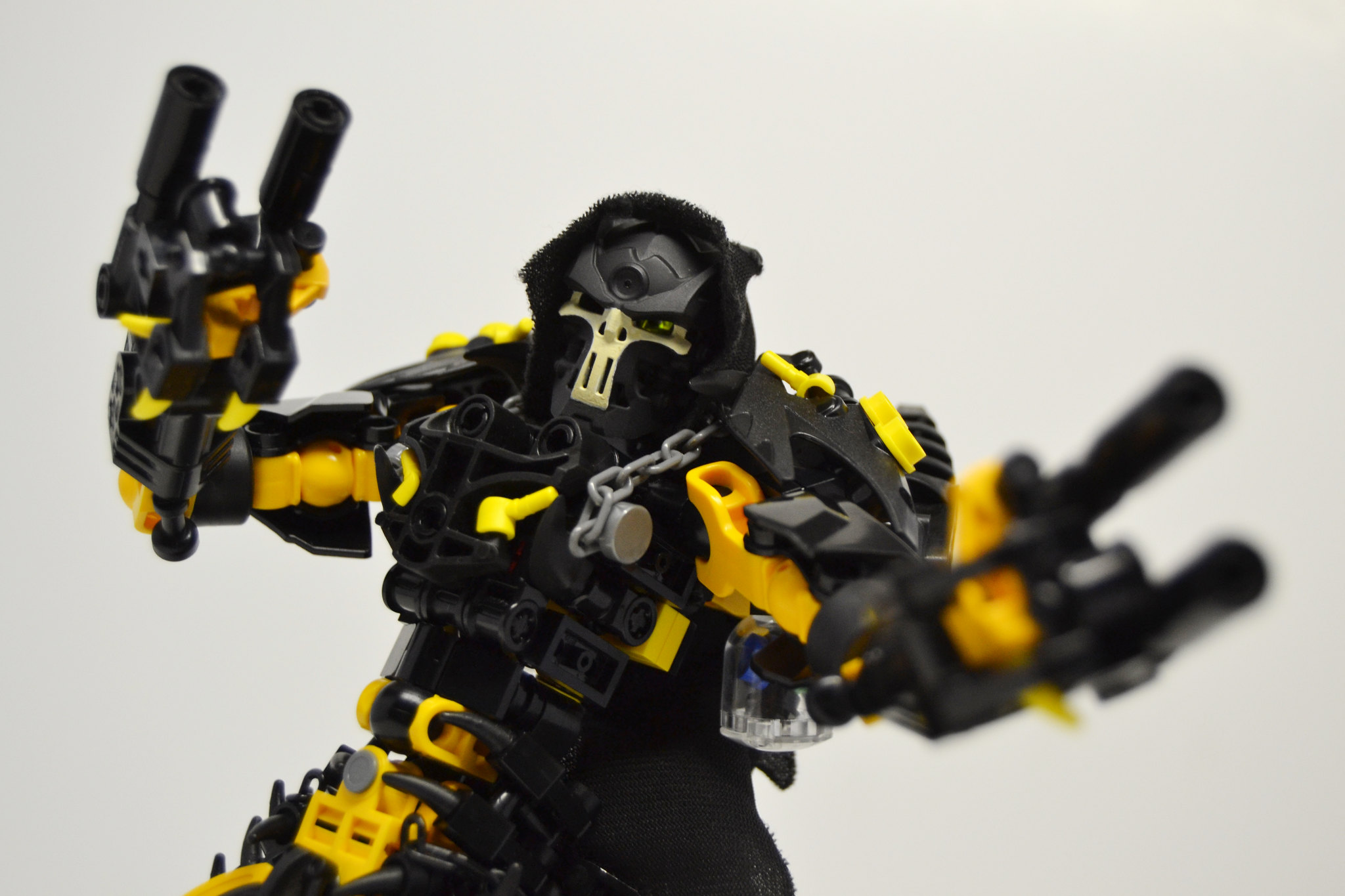 Shadow is known as a Necrospherian, a ghost-like creatures who are the spirits of many worlds, all residing on the planet Etyosa. This planet is ruled by the tyrant, Fractus (Phantom), who seeks out the strongest of his kind to amass an army. Under his reign, those who are deemed weak or have no potential are exiled. Shadow, being one who would fight against his ruler’s tyranny from a rebel faction, was not only exiled, but sent to a planet in the physical realm. This was his punishment; he could not hide from those who would see him as a monster. He was able to be incorporeal for only short bursts, unable to escape or try to figure a plan in secret.

He had discovered that the locals often wore masks to hide their face and would wear armor, this was a planet of warriors. Shadow had crafted a mask, armor, and even a cape for flare to blend in with the crowd. When time came around to fight another, he had used what the locals deemed as “nightmare” powers. His powers were mental manipulation and super speed, able to take almost any opponent and force them into a dream like state where he could have complete control of what were to happen. He would be able to read the minds of those he took control of, knowing their weaknesses, and creating a nightmare that would defeat the enemy. This was not something a Necrospherian could do in their own realm, but no other has been exiled to a physical world, so Shadow was unaware of this power.

After his powers were shown, he had become the rival of many, and yet would always win any battle that came his way. He became a leader with a small group of elemental warriors, and fought many enemies. One of which, was his original enemy, Fractus (Phantom), who had started to bring his army into Shadow’s world to overtake it. He had made friends, lost friends, even became reacquainted with his original rebel group.

However, something completely unpredictable had occurred. Without any warning, the whole planet was engulfed with a bright, blinding light. Where all if not most of the inhabitants were sent to what looked like a whole new world. Enemies, friends, all covered in a pink dust that fell like sand once brushed off themselves. To those that were not of Shadow’s kind were completed oblivious, acting as if nothing had changed. While all Necrospherians had noticed the change. This was the work of the Aeonyx, Kairos, who had copied the planet’s creatures for his own pleasure, but due to the physiology of the ghosts, they were merely moved from one planet to this fabricated planet. They could sense Kairos, and have been sent to a world they cannot escape. The Aeonyx had realized his mistake, and sent beings of his creation, the false Aeonyx, to secretly find and destroy these beings. If they were to spread the word of Kairos’ plan, all is lost, making it easier for him to be found by Lady Void.

The Necrospherians had teamed up, even Fractus with Shadow, many battles, many lost, with only a handful of them left. One of which, was Shadow, who had changed drastically since this occurrence. He had been spending many, many years trying to run and fight against Kairos and his minions. He had become a veteran fighter, a master of his “nightmare” powers, and had casted off his mask as a symbol of his Necrospherian pride. He had the remains of his team stored away, in the event that he could escape this planet, he can try and bring them back. Despite his increased skill, he had grown frail with time, and while still a more than capable fighter, realized he could not do this alone.

He had heard of a small group of fighters who were under the command of a white, sleek robot that had possessed the powers of magnetism. Shadow had studied him as well as his team for multiple nights, and had discovered that he was not a confident or skilled leader, but had potential to be. Minion, the leader, had a great team who did not see eye-to-eye or even all together at one place, but had studied many battles they have gone through.

Shadow had decided to intervene when Minion and his team were in a losing battle with Vanity, one of the false Aeonyx. Calling her out for what she is and revealing to everyone that this whole world was the work of a great overseer. From there on out, Shadow became a guide and an elder to this team, to not only bolster a better leader and team, but use them to defeat Kairos, and travel back to his home world. 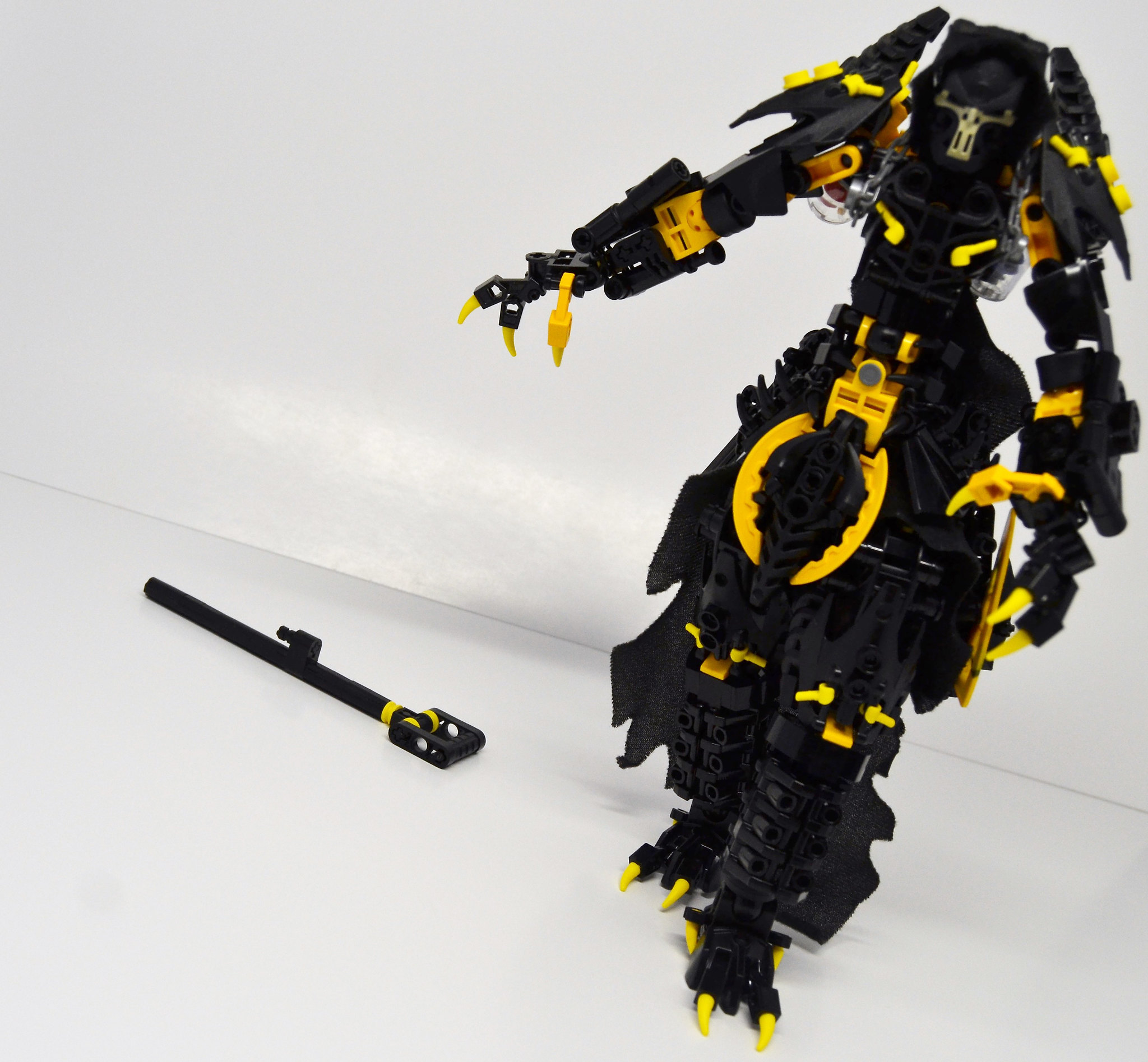 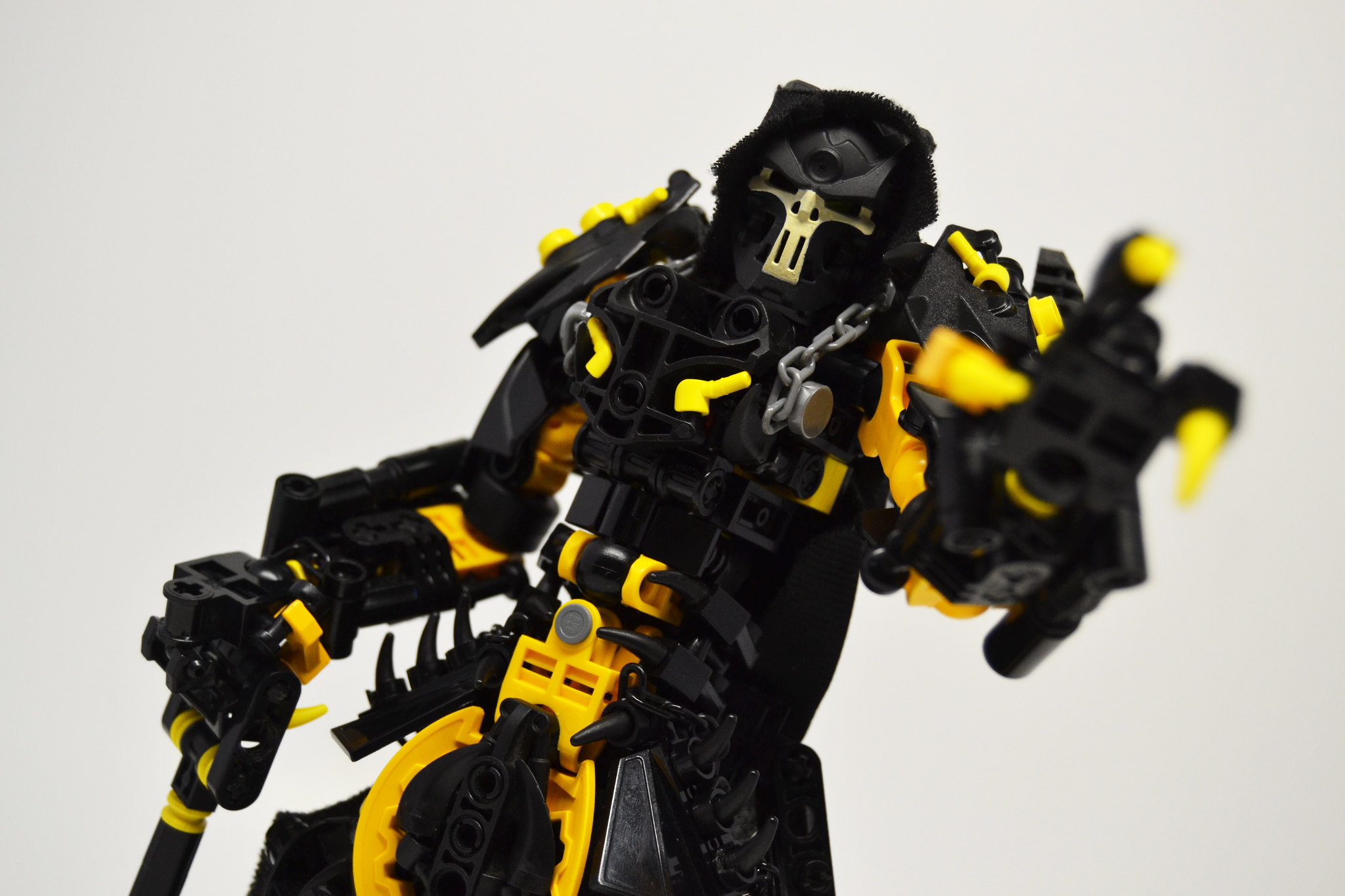 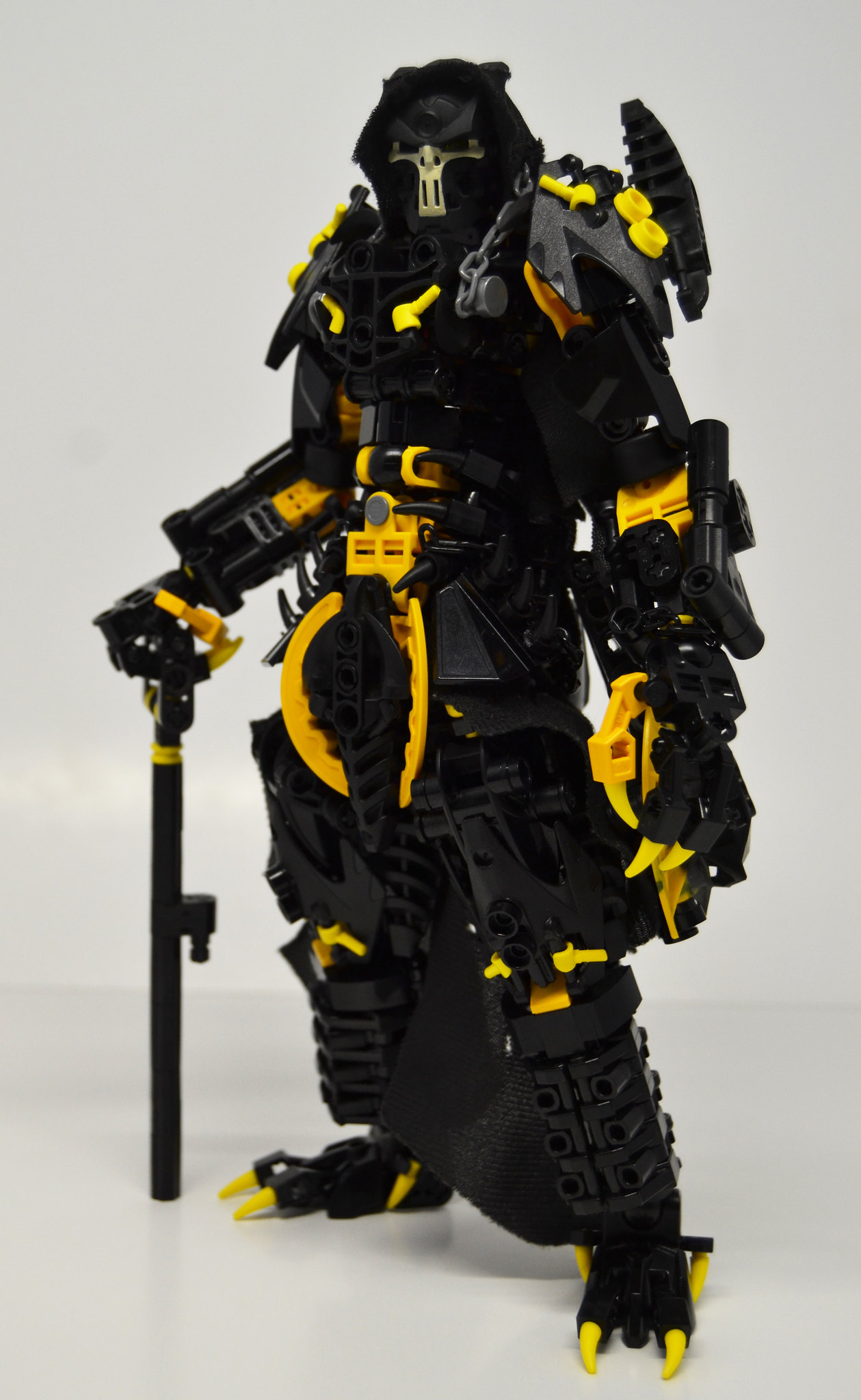 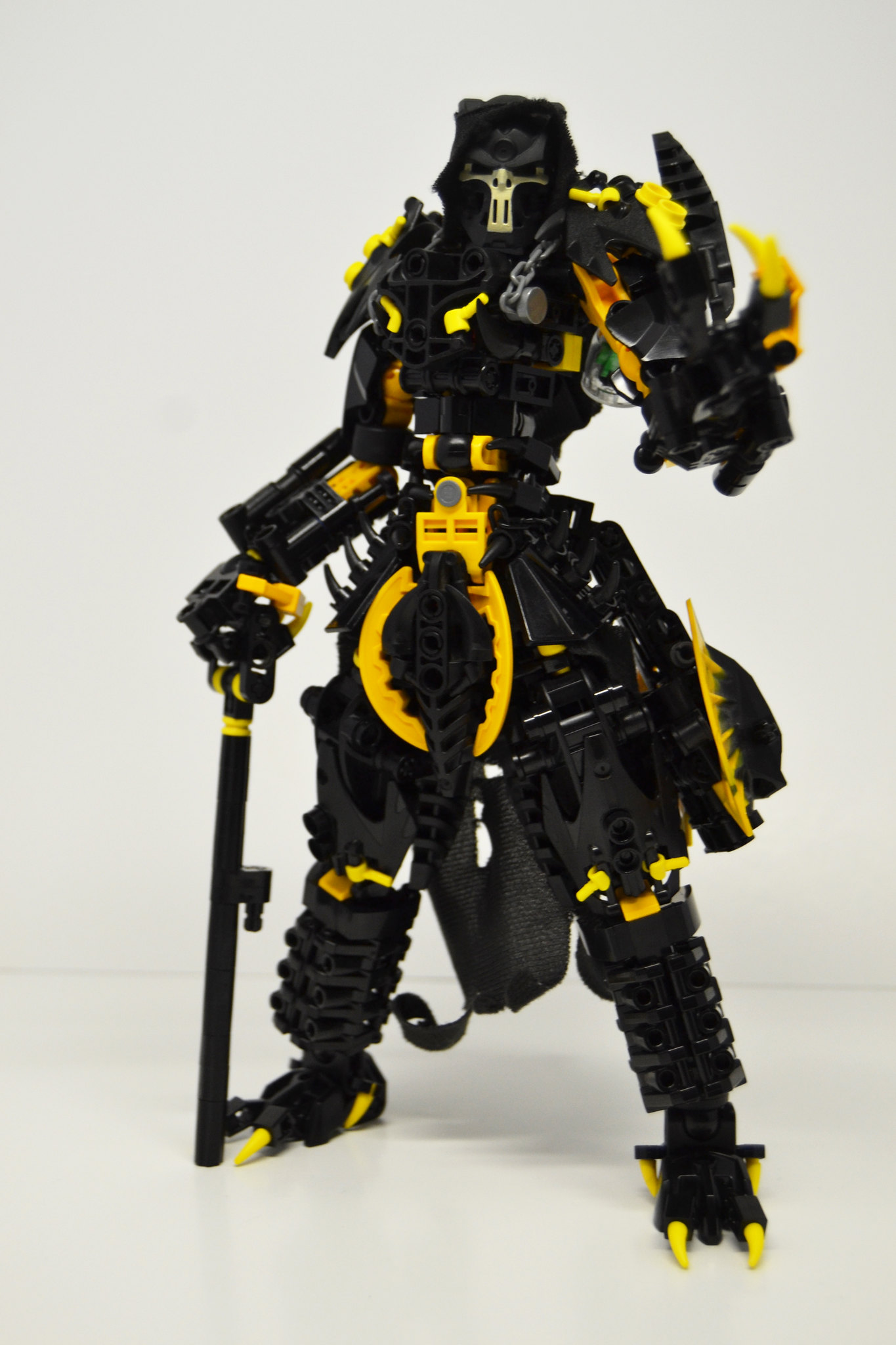 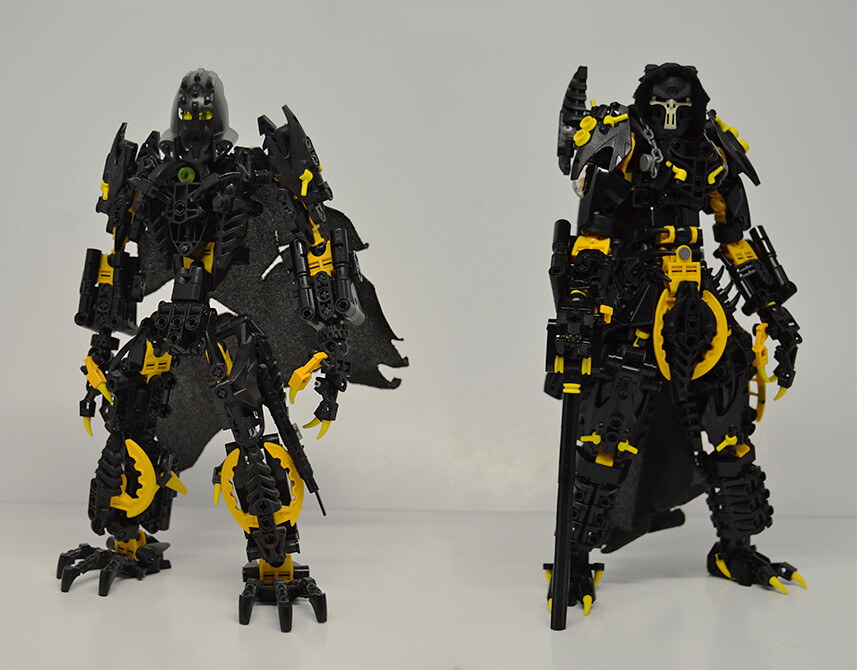 Thank you to Modalt Masks for painting up this mask for me!

This is very nice, especially the painted mask.

Uhh the link to the links to the review and slideshow link to just the slideshow, you might want to fix that

Thank you, all fixed!

#IT’S EDGY GRANDPA SHADOW
Jokes aside, this is pretty great.

Wow… Just wow. The color distribution is on point, the build is fantastic. All around a great job! Though that random hewkii mask on his leg is kinda weird… So, was this built to represent your d&d character?

A fantastic recreation of Shadow. I like that he retains some of the iconic details of his prior versions, all the while having an aged, yet powerful look.

First reaction upon seeing this MOC: Woah!
Reaction upon looking through all of the pictures: Woah!

So, yeah, this is so cool! The color scheme is well distributed, and he has just the right level of detailing. That painted mask really helps to sell the look, the yellow part almost looking like a face of its own amid the black. Just, wow!

Gosh I wish I could build like this. Simply amazing.

One of my favourite mocs of all time. Saw your moc review on Youtube and I’m absolutely blown away. Definantely and upgrade from V.1 and absolutely love, love, love that custom mask. Amazing job.

WAKE ME UP, WAKE ME UP INSID–
wait why is my face on his hip

All jokes aside, this is a pretty coll, albeit pretty edgy, evolution of Shadow. Would you mind telling me where’d you get that nice painted mask?

Painted mask kind of sells this MOC, yet at the same time it would have benefited from being smoother like the mask. The chest especially has quite a bit of greebling and i’m not particularly a fan of the chain piece as there are’nt any other chains on the MOC.

As you said in the review, the centered bulk is a really cool and unique look. Always nice to see how inspired your MOCs are.

where’d you get that nice painted mask?

Thank you to Modalt Masks for painting up this mask for me!

It’s a neat revamp and reimagining of shadow, nice armor and bits

i love your moc’s
big fan

Seen this before on Flickr.
This is still really awesome.