Well, this is my big reveal of the night, what I spent about an hour doing. I personally like the end result. Bio is at the end so not to give away the “surprise”!!! (cue jazz hands) 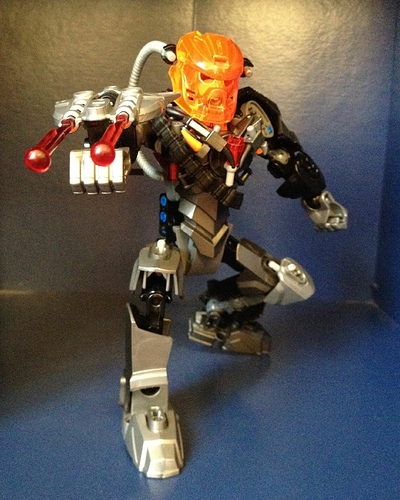 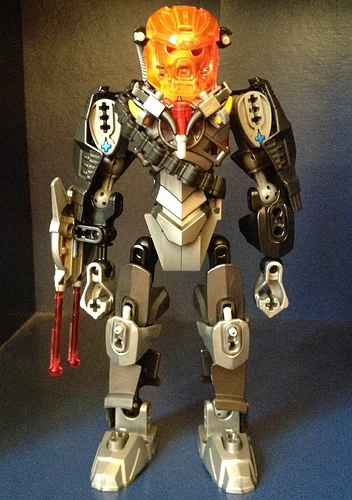 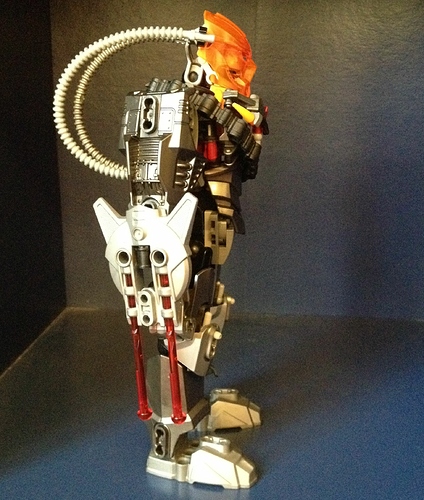 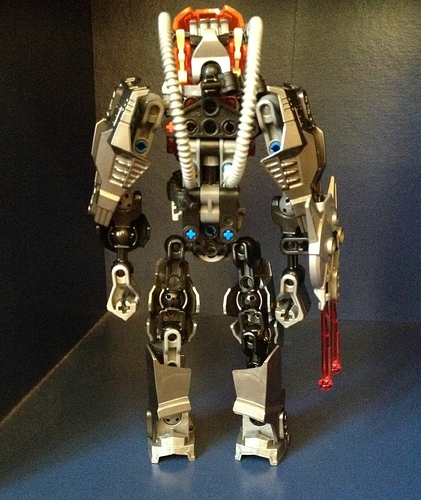 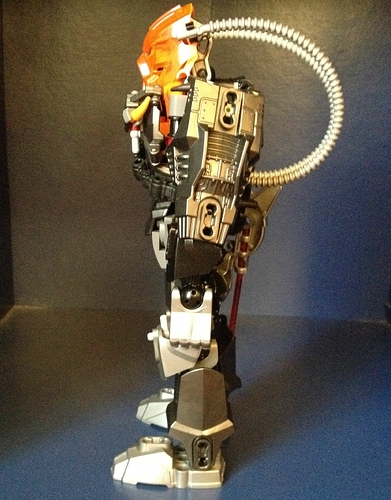 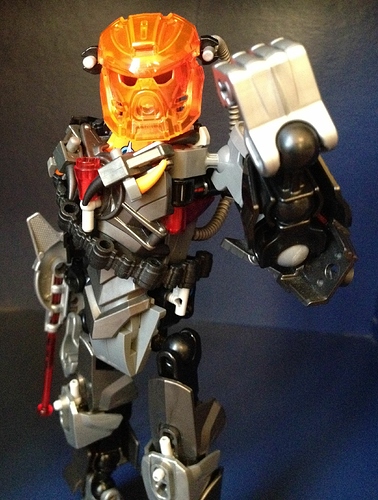 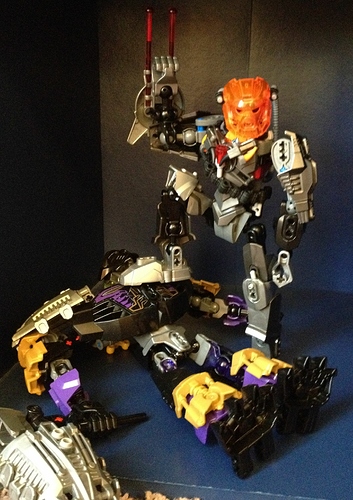 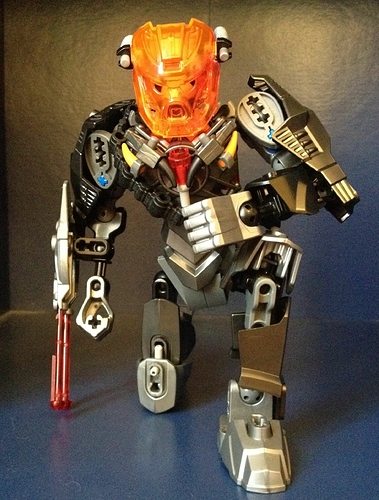 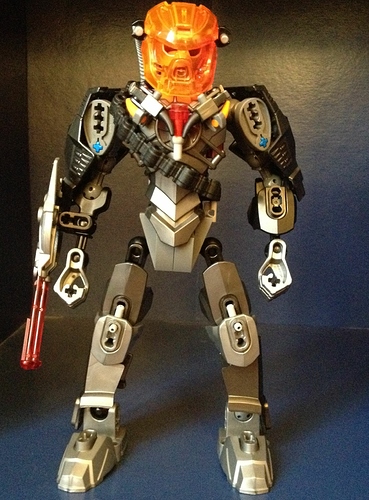 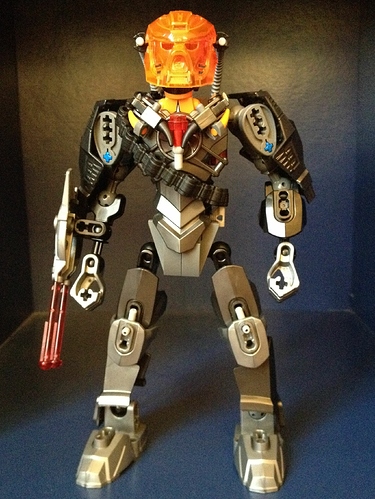 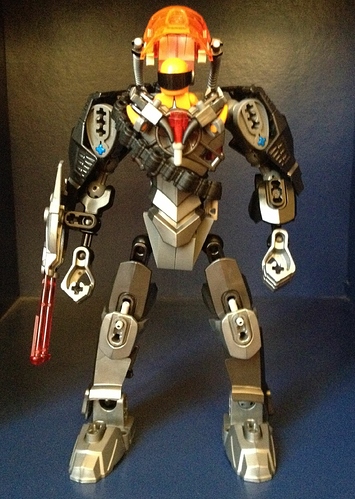 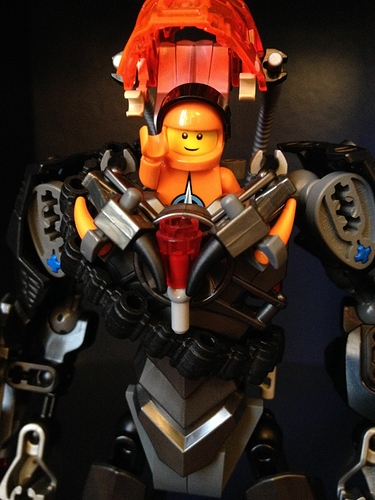 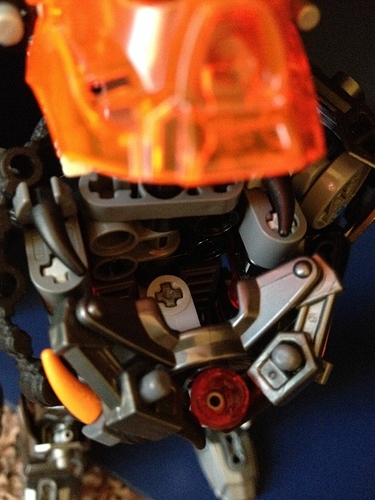 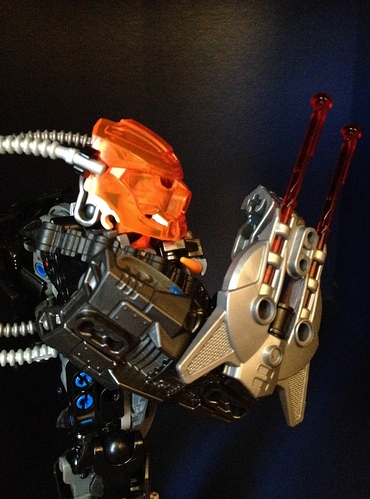 Bio: When the Minifig world’s space station detect a habitable planet, they were thrilled. but a quick scan showed it was dominated by giant violent beings, they were less thrilled. “We need to see if these beings are friend or foe” said the chief. So the engineering department built a mech that appears like one of them, and choose the best pilot, Nexus. When Nexus crashed into the plant like a comet, he was greeted by a mob of villagers.
“Are you a Toa?”
“When are the others coming?”
What’s your name?
What element do you control?"
unsure how to respond Nexus said,“I am Nexus, Toa of lasers.” He was met with a silence.“What in the name of the elements is a laser?” said one villager.

Eventually Nexus would learn their ways, and fought off evil for the villagers until the true Toa arrived. He reports to space command every other week, telling them if he learned anything new. He has yet to reveal his true Identity to anyone, not even his Toa team.

Creation: the torso was the hardest part, with making it able to hold a minifig and not make it apparent that it’s holding a minifig. The head was hard to make poseable while being able to hold a minifig head and helmet. believe it or not you could still get quite a bit of poseability out of the head. the legs and arms are simple, but don’t really take anything away from the MoC IMO. This is the first time in awhile I really delved into CCBS or technic, so it could probably be polished a bit. and has this idea been done before? I hope not.

So, being honest, how many of you actually saw the minifig before the reveal?

Lego Universe awww yea
I love the shaping on this guy.The Brain Attack torso and arm assemblies are a really nice, but the waist looks a lil derp.

No but really, while the rest of the moc is alright or decent, the body really shines. It flows and can fit in a minifig. Although maybe the mask choice is a little weird.

@SwagMeister I choose the mask since it’s the only transparent one I have, so I imagine it as a cockpit. Also it meshes really close to the chest, so the Minifig is hidden better. Although I believe that it would work with any mask. I’ll try it in the morning.

My only complaint is that mask color doesn’t seem to quite match.

Oh my gosh, it’s a minifig 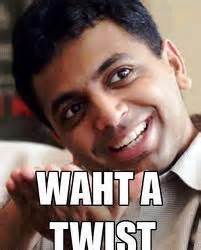 It has a very interesting design, especially with him being a mech. Nice job

Woah! That reveal caught me by surprise! Bravo love the MOC

I was surprised.
Cool moc, dude.

I am intrigued. This is… a well-built stuff there.

Although maybe the mask choice is a little weird.

I tried all the G2 masks besides MoCo and MoCr and Ouna uniter’s mask is the only other one that really works. and even then it didn’t cover up the minifig as much. 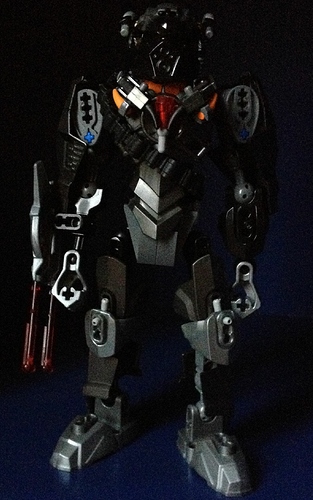 This looks awesome! I really like what you did to the MOC’s upper arms, it works really well!

Pretty noiiice
I love how the trans-orange mask looks on him.

This is beautiful. A true work of art.