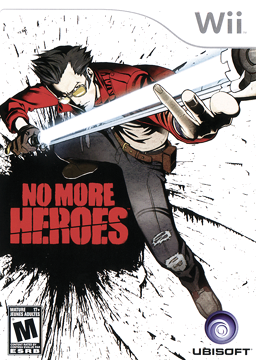 One of the most hilariously violent video games of all time (and a Wii exclusive, to boot). But at the same time also super silly, as well as symbolic. Obviously, a lot of stuff in this game isn’t appropriate for the boards, but I think it’ll be just fine (I mean… we have a topics for other pretty violent games…)

Starring Travis Touchdown, local otaku loser who happens to win a discount lightsaber on eBay, and decides to join an assassin association and kill people for fun.

There’s also gonna be a third game on the Switch.

and travis totally shoulda been in smash instead of bayonetta

I made that, and it was taken down, kind of glad it was, since really when it comes down to it, the only things you can talk about it are the bad stuff. Don’t know if that’s the case for No More Heroes.

and it was taken down

no offense, but good.
Also i edited it, so everyone can forget