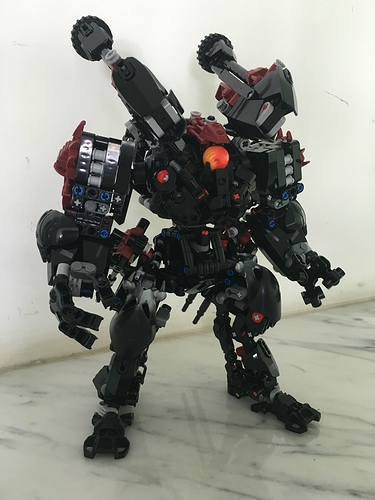 New moc I made, as you can see its quite the contrast to my previous Moc “Apricity” it still has that “animeish” mecha vibe to it thats cause I really like the style of it. 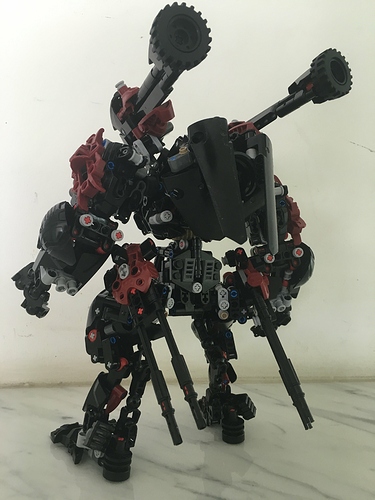 Back view. From the back you can already see the massive railguns and waist cannons. Which I love so much.

Close up of head/torso I really went for one eyed war machine look for this guy and I think it looks pretty sweet!! 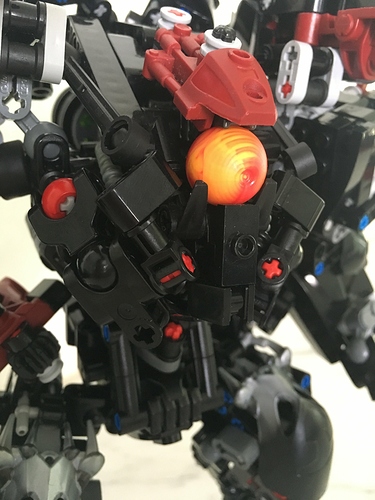 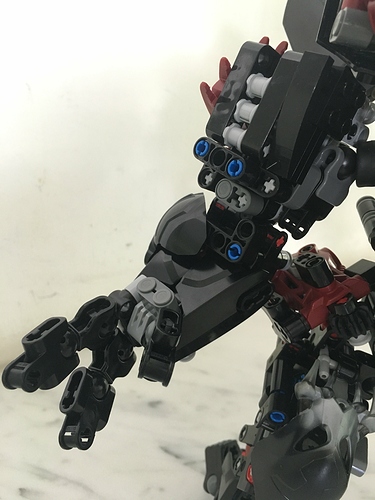 image.jpeg3024×4032 1.5 MB
The fingers are balljointed and hence really helps with posing cause hands can really express a lot in a figure. Which in this case is pretty important to me. 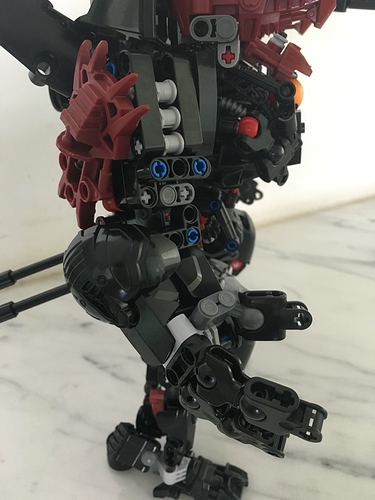 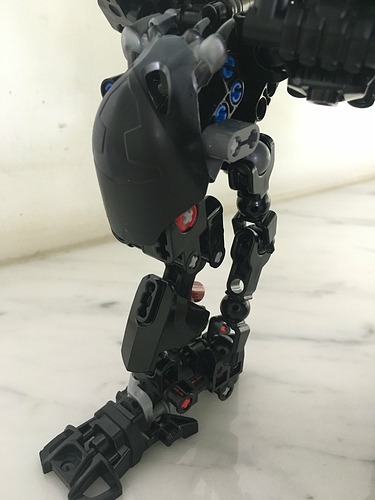 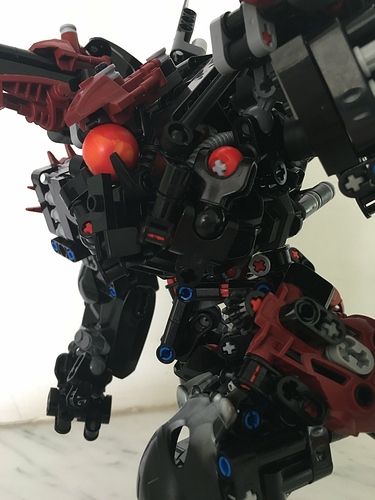 image.jpeg3024×4032 1.78 MB
The dudes armed to the teeth with weapons
The waist cannons can be flipped forward 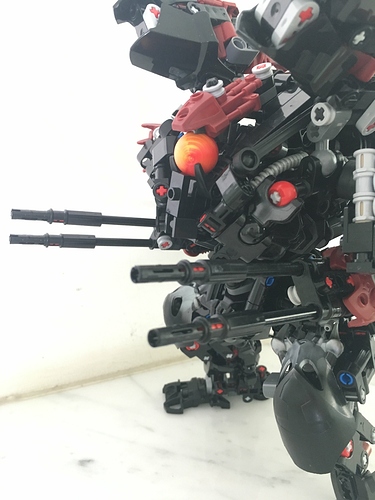 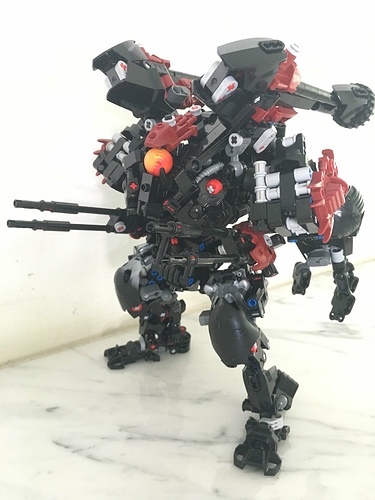 When the railguns activate, flaps open at the back. Sorta like a jet intake thing at the back which charges the “hyper-beam” railgun if that makes any sense. 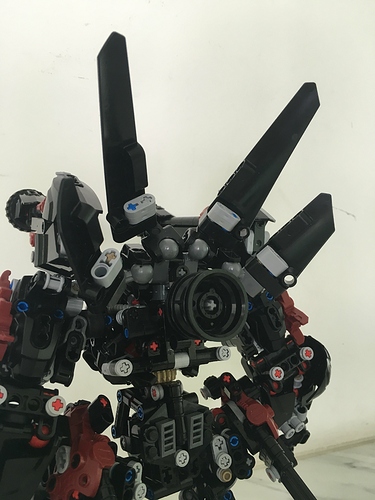 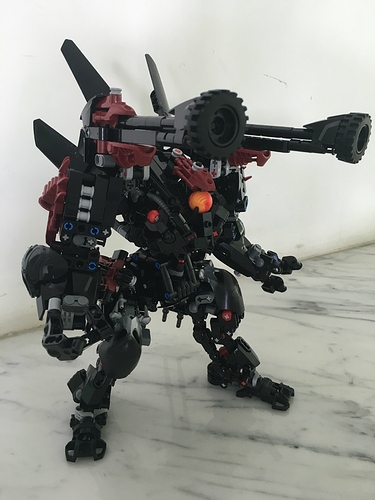 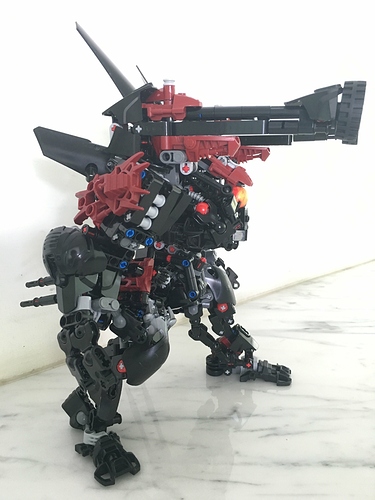 It even has bicep blasters hidden under its armour 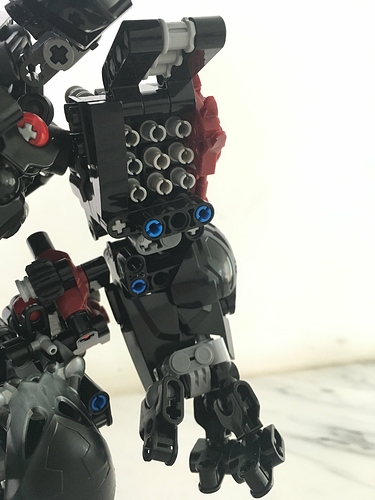 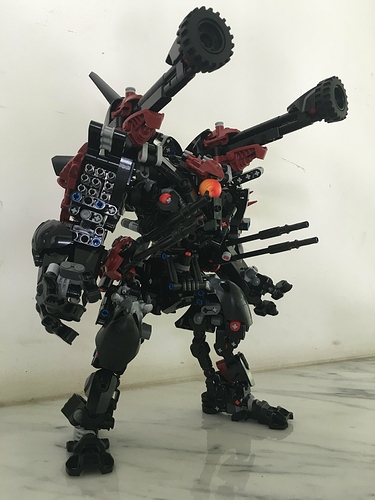 This is epic, it could take down Eljay easily with that open pin launcher

@Umarak Thanks that was the entire point of its creation.

How stable is it?

He has my colors and my approval.

He’s pretty stable, the legs have extra balljoint connections and the feet are pretty long, the least stable part is probably the hip/thigh connection, where most of the moc’s weight is supported on.
@Xevins Thanks!

He’s pretty stable, the legs have extra balljoint connections and the feet are pretty long, the least stable part is probably the hip/thigh connection, where most of the moc’s weight is supported on.

I thought that would be the case.

I just thought he might have some balance issues, cause he is pretty bulky, and the canons stick out…

He’s alright, however his builds pretty solid so even if he falls over during posing its not a problem. Thanks for the critque, really appreciate it!

Looks cool! Reminds me a lot of Hawken.

I always love concepts like these, but it overall looks cluttered. I’d try to streamline the shaping a bit more.

I was hoping for a system mecha… RIP

The shoulder connection seem thin, but I dig the pin launcher. I would like to see what it looks like without the railguns

Woooooou this is sooo SICK ! Thumbs up mate !

The only issue is the exposed balljoints and blue pins, but those are easily looked over.

Looks a bit cluttered, but i guess the overall image compensates that.

The proportions and a lot of the overall design aspects of this moc remind me a lot of D.VA’s mech from Overwatch… Which is in no way a bad thing :^)

@Omega_Tahu Oops sorry haha, welp thanks for the critique and comment! Without the railguns Obsolic just looks more “bottom heavy” since its waist cannons is all it’s got.
@BiotronicMocs Thanks man, really appreciate it!!
@Ghosty Thanks Ghosty!!
@Yveran Hey thanks for the awesome comment!
@Kan I know, those railguns are rail cool, thank you
for your comment sir.
@Jayfa Aww yeah thanks for the comment!!:^)

Some of the textures and aspects of his design do kind of detract from the overall look, but the greebly nature of the MOC works well here I find, and the design overall is really cool.