In a small ice village of Okoto, the night was young, but nobody was about to throw a party. Rumors had travelled in the past weeks that enemies thought to be long gone had returned in the form of Skull Cultists. Izotor had visited a few days ago to assure the residents that they had nothing to worry about, but this was no ordinary village. These villagers were battle-ready, and weren’t about to take chances after hearing all of the terrible tales from before. Luckily and unluckily…they were right to be suspicious.

Just a day ago, tools known to be used by water villagers had been found nearby, along with Skull Spider tracks matched with villager tracks. Skull Cultists had indeed come to take their dwelling.

This, as you may have surmised from the title, is a game of Mafia with a Bionicle skin over it. Basically that means it’ll be general mafia rules, set in a Bionicle setting. Specifically, Okoto after Ekimu and Makuta were knocked into an endless sleep.

If you don’t know how mafia works, then read on. If you do, skip to the part that says “Residents of Okoto.”

Mafia is a bit of a complex game, but one that once you get the hang of, it’ll be easy. It’s a game that revolves around clever tactics and deception, and, in most cases, luck as well. For the purposes of this game, the players will be divided into two sides: The Villagers, and the Mafia. Each side is trying to kill the other.

After everyone signs up, you’ll be given a role via PM. If that role is Mafia, then you will be part of a team of mafia members, trying to eliminate the remaining villagers. Each “night” (more on that in a bit), you and your fellow mafians will choose one villager to kill. After your decision is made, I will post on here informing everyone of who died, as well as a list of 4 potential suspects (one of whom is the real murderer) for the killing. This is where a good deal of the strategy comes in.

Everyone, villager or mafian, can vote on who they think should be executed for last night’s murder. If you’re a villager, you want to get the mafian who committed the act. If you’re a mafian, you want to get a villager lynched in your teammates’ place. Note that you can only vote if you’re alive; the dead have nothing worthwhile to contribute. There will be 24 hours from the announcement of last night’s killing to vote, and you can change your vote up to two times.

As mentioned before, this game has various roles, which will be distributed through PM. Here’s a list of all the roles in this game, as well as how many of them there are.

Skull Cultists (6): These followers of the ancient skull teachings function like basic Mafia. Each night, they will meet under the guise of darkness and choose who they wish to kill. During the day, they will pretend to be villagers, and act innocent while trying to get the real villagers sentenced to death for the crimes they committed.

Villagers (17): These simple, unassuming townspeople are the last line of defense the city has. They do very little outside of voting on who they believe is guilty for the crime. However, because this village was prepared, each has their own defensive item, good for one use. Villagers can PM me the night they want to use their defense.

Defender (1): This villager’s reflexes have been trained to their fullest extent. Each night, he can choose someone else to defend. If the mafia attacks the player being defended that night, they will not die.

All roles have been sent. If you did not receive a role, you are a normal Villager.

The Cultists have begun their assault.

All players may PM me to use their Defense. The 12 hour rotations begin when the first night is posted.

Yay! The game is going to begin!

All your base belongs to me!

All your base are belong to me!

Anyway, can’t wait to get started.

Yeah well I think it will. I just have this feeling.
Though if this one ends poorly, I probably won’t play again.

I will I do better than the last game.

Bon Jovi once told me somethin’.
"Never trust the guy who’s in the Mafia.

Alright, let’s get this started!

Dark times were ahead. The fateful night was now very much alive, for the Skull Cultists had gone to work. Marendex and Red1s had been at a confidential meeting with a few others at TBT_Emerald’s hut, discussing their own plans of escape in case things went really bad. Little did they know, their plan had already been compromised. The group disbanded, leaving TBT and Red1s alone.

The next morning, the villagers were horrified to awaken to the sight and smell of fire. TBT’s dwelling had been torched sometime in the early morning, and unfortunately, Red1s was found charred to a crisp, sans a few mutilated joints assumed to have been ripped off and taken to the Lord of Skull Spiders. The village had no time to mourn (but luckily enough to put out the fire), and knew what had to be done.

Four suspects were highlighted as the culprits:

@xX_TChalla_Xx had always been known to be a pyromaniac despite being a villager of ice. He could have put his skills to good use in making sure TBT’s place fully went up in flames, Red1s along with it.

@TBT_Emerald was the last one to see Red1s, not to mention it was his home that was burned, and he so happened to be down at the lake at the time.

@Political_Slime was highly suspect because tracks of soot were found leading to his home.

@FreeLanceVelika had a particular distaste for Red1s, and was the one to reveal (or at least lie about) the meeting last night.

You have 12 hours to vote for who you want to execute. Again, players can change their votes twice, but no more, and it must be formatted as who you are changing it TO and FROM.

xX_TChalla_Xx seems the most highly suspect, so my vote is for him.

Ok. Thinking time. @Political_Slime could only have soot on his feet if he went to the house after the fire had happened (Though it’s possible he could have stayed and watched the fire, but that seems unlikely). @FreeLanceVelika may have a motive but, why tell everyone about the secret meeting? @xX_TChalla_Xx and @TBT_Emerald seem to be the most likely suspects. I vote for TBT given that he likely planned to ■■■■■ blame by setting fire to his own home.

I think it’s worth adding this. Doesn’t it seem like TChalla fits the bill a little to perfectly? As if he was gift wrapped for this. Anyone is capable of setting fire to a house. Pyromaniac or not.

Revealing the meeting seems like a good way to ■■■■■ suspicion around.

I vote for @xX_TChalla_Xx for now, but TBT seems somewhat suspicious to me as well.

No one took chips this time?

Okay, @Political_Slime was there during the night, @xX_TChalla_Xx had the means, and @FreeLanceVelika had the motive.

And it was my home that burned down.

My vote goes to @xX_TChalla_Xx.

I believe it is @xX_TChalla_Xx since Killing @TheRed1s would not be at the top of the mafia list, when everyone who has played before or looked at old games knows that there are other people who make spreadsheets and are much more dangerous(no offense to @TheRed1s).

@xX_TChalla_Xx didn’t play in the last game unlike everyone else on the suspect list, so would most likely make the mistake of not taking out crucial villagers. plus the fact he has the ability to set fire makes him highly suspect.

but I will withhold my votes until the suspects react and try to defend themselves, as that sways decisions quite a bit

First up, Political Slime. He’s the most likely. I mean, tracks of soot leading to his house. That’s incredi-suspicious.

Next, TBT. He was the last to see Red1s, but he wasn’t at his house at the time. The evidence there is shaky.

FreeLanceVelika didn’t like Red1s, and revealed that there was a meeting the night before. He seems to be trying to blame someone else.

Lastly, me. To put it simply: 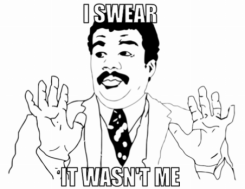 My vote goes to @Political_Slime

So, uh, who’ll post the funeral music this time?

Sigh. Perhaps I will, since I plan to write the music for my own IRL funeral. Considering that I’m the one who gets killed, of course.

After some uber MLG Pro skillz and analyzing, I think it’s @FreeLanceVelika, since he has a motive that somewhat makes sense.

Motive seems slightly irrelevant when it’s the Mafia’s members job to kill someone.