A burly toa with a gruff, silent exterior, Orabmar was an intimidating figure who was nearly impossible to fool.

Orabmar is an older character from my Cyclic Plane Storyline. His Toa version was made all the way back in 2010, but the matoran form is new! 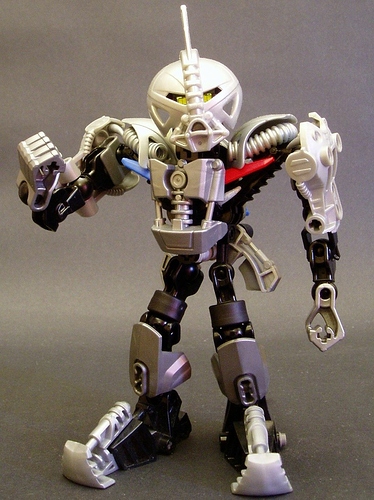 Orabmar lived on the island of Poliaz, which lay off the Southeastern coast of the Trek Krom Peninsula and was ruled by a Turaga of the same name. He ran a shop in the more upmarket part of town that sold sports and hunting gear and suchlike. 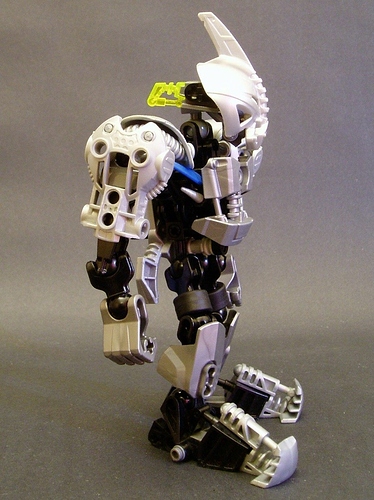 Like most matoran on the island of Poliaz, Orabmar was improved by Makuta Raximoras into a bigger, stronger form. He was a shrewd businessman and was a leading member of the league of merchants on the island. 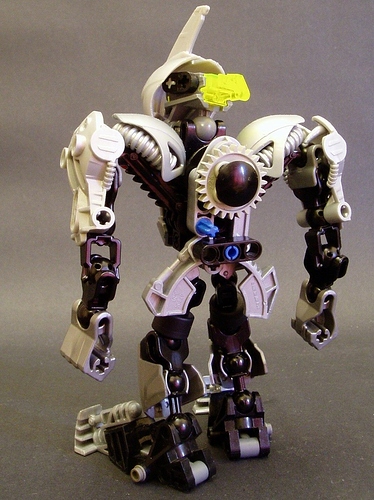 Unlike many of the merchants, Orabmar was very honourable and didn’t like how many did their business on the island. He was very outspoken against the seedy underbelly of Poliaz, but also claimed the new music they had was making matoran into criminals and the guard weren’t doing a good job. 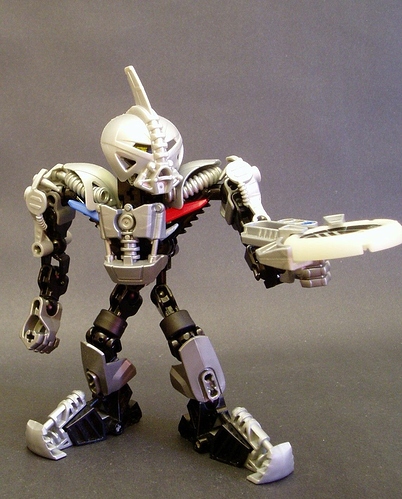 When Lizena was killed, Poliaz and his vortixx viceroy, Vanembar, called for help from the matoran population and used energised protodermis bought on the black market to create new toa. Most who signed up died or were horrifically mutated (and secretly put down), but Orabmar, Gratigan, Soleku, Xalos and Gringat survived and became the Toa Vanembar. 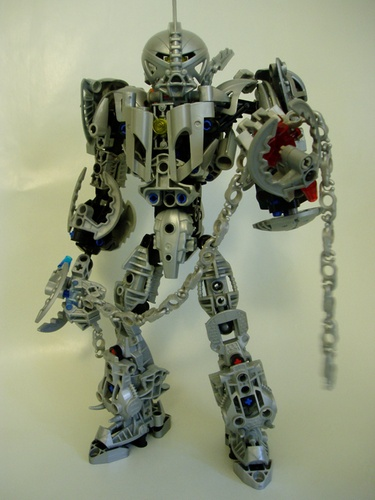 As a toa, Orabmar did not get on very well with his fellow toa, but stayed with them out of a sense of honour and duty. He saw Xalos and Gratigan as incompetent but later grew to respect and trust them. Gringat he grudgingly grew to respect as well, despite his previous gang ties. He and Soleku never got along. 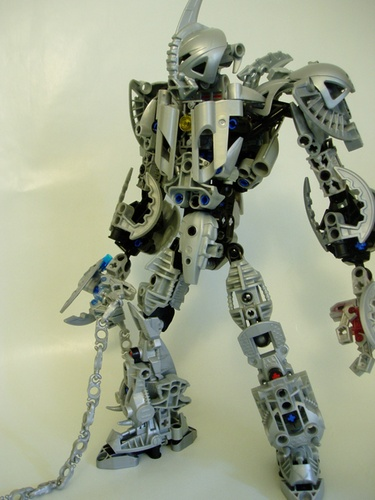 Their toa team was bolstered by a couple of toa sent from the holy island of Korrothis by the Onu-Nui, Reglas - Abarium and Kana. Orabmar befriended these two toa more quickly, though the others weren’t as quick to trust. In truth, they had been sent because Reglas suspected foul play on the part of the island’s leaders, and the Toa Vanembar needed monitoring. 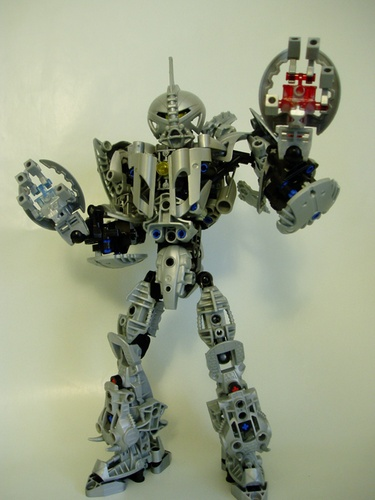 The Toa Vanembar trained on Korrothis’ Fields of Valour and learned how to use their elemental powers and masks. Orabmar found his role being the brute force behind much of his team, and his mask’s ability to see through illusions, deception and lies came in handy more than once. Rather than use a weapon, Orabmar preferred to use the environment to his advantage or fight hand-to-hand or with props. He could also carry very heavy loads of equipment, negating the weight with his powers. 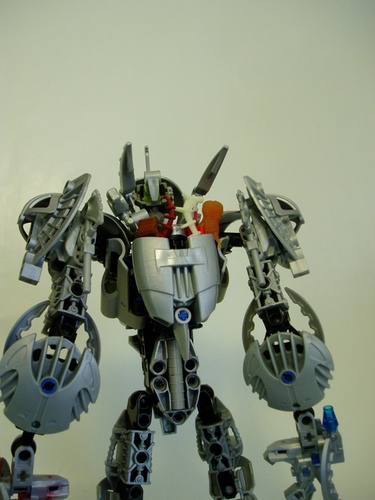 The team stayed together for a few centuries, guarding Poliaz from threats and travelling the inner seas representing their home island. When Gratigan and Abarium were killed by the Kanohi Dragon that killed Lizena, Orabmar found himself being the sole muscle for the team. He and Kana grew close, as well. 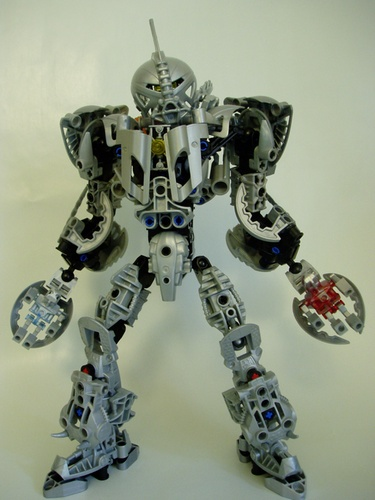 A confrontation with a group of pirates on Xia spelled doom for Orabmar. He was shot in the chest with a stolen experimental weapon built by Ferrum. His body was completely destroyed, though unknown to his teammates, his spirit remained bound to the stones nearby. They were recovered by Reglas and kept in Korrothis’ vaults, until one day centuries later, Mata-Nui used the Ignika to bring him to life again.

Orabmar was reunited with Kana on a newly reformed Spherus Magna. Thanks to changes made to all Matoran by Mata-Nui, they were able to fuse and create a daughter, Aza.
Orabmar became a Knight of Spherus Magna, as many toa did, until the destruction of the Ignika brought about the Soulplague, from which Orabmar and most first-generation toa died.

They aren’t accent colours. They’re part of his gauntlet weapons. On his own he will look pretty bland since matoran/toa of magnetism are boring. :v

I really like the red and blue as they spice up the dude sooooooooooooo well.

other than feeling the accent colors should be more pronounced, I think this looks pretty good

Once I saw those accents, I was immediately reminded of the Pokemon Magnemite’s magnets.

The magnet colors are a nice touch, and even though the titan version is awesome, but I actually kind of prefer the protector sized version, but I’m not quite sure why. Although I guess the mask may be a bit o big on that one.

@Rockho the red and blue pins do that

Both the mat organ and the Toa look pretty good. Nice job

They are both Noice

Excellent work, as usual! The Matoran form is a great combo of CCBS and G1 pieces. The Toa is great as well–I hate building/creating Magnetism characters, 'cause they’re so colorless (one of the many things G1 suffered from was a lack of innovative color schemes for its lesser-known Toa–particularly Sonics, Magnetism, and Iron). But you’ve managed to make it work!

The backstory, as usual, is awesome. If you wanted to add more of the red/blue without making it a secondary color, I’d consider adding more visible red/blue pins [gets shot by Eljay], and perhaps changing the Toa form’s heart-light color to one of those (though he’s likely taken apart by now, given how long it’s been).

(though he’s likely taken apart by now, given how long it’s been).

He has, sadly, yes. This post is mostly to show the new matoran form and the toa form is in there mostly for context. The only MOC I have surviving from that era is Xalos