Alright, first off, I know this has already been done to death, I’ve seen some amazing revamps, remakes, and overall upgrades to the Toa of 2015 in general, let alone Pohatu… Well, still primarily Pohatu, but still. Either way, here it is.

I’m obviously late to the party since there’s already revamps of the 2016 sets, though I just recently began collecting the Toa and Protectors of 2015, and when I got Pohatu in the mail, he… just didn’t feel right after building him, the boomerangs were cool, but it just… Really didn’t feel like Pohatu, he didn’t bring anything new to the table like the brown Toa of old so that was disappointing. After some rummaging in my totes and boxes and such to find some good parts to use and some inspiration, I decided to make some changes to him.

It actually tool a bit longer than I thought since I tried turning his torso upside down which looked off to me, and tried manipulating his armor around it only making it awkward, especially the ball joint sticking out of his crotch. Until after roughly 30 minutes with no progress I just started messing around with him and slipped his gear box on the bottom of his Torso with the legs on it, and suddenly it all started to come together from there, even using some pieces from the 2016 sets on his legs and such until it just felt and looked right. (Although I’m not entirely happy with the back of the legs and the back, but overall the idea is there) 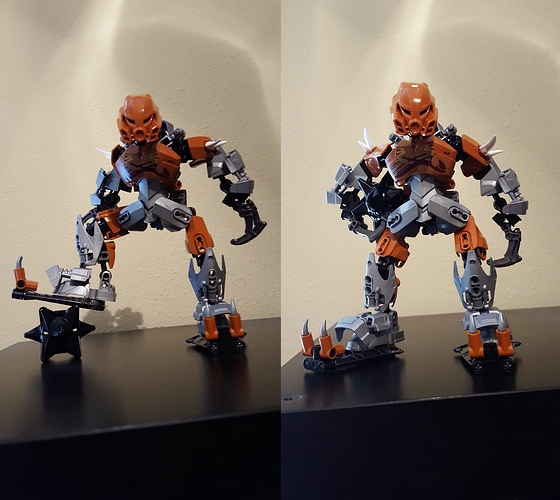 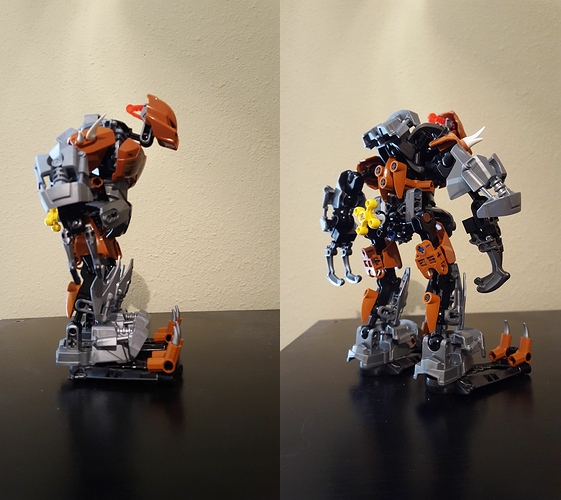 This doesn’t really qualify as a MOC, I just wanted to make some changes to Pohatu, and felt they were alright enough to show just for the heck of it. I wanted to put his boomerangs further back onto his feet, though that didn’t quite seem possible without using completely different feet, so I just worked with what I had. I also wanted his fingers spread apart a bit more, though every method I tried looked a bit off so I just did a more simple approach with his hands. Needless to say, I am much happier having this Pohatu stand next to the other Toa and having his own differing body shape. I even made his eyes orange like his Mata variant which looks much better with him than the trans light green did.

I did have a few minor changes I almost kept with different armor placement on his arms, and a bit more trans orange on his boomerangs, though I initially went with the final result above, however for comparison’s sake I’ll put it down here as well. 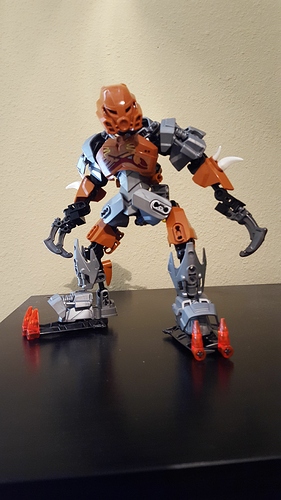 Overall, even though this isn’t entirely a revamp or a MOC and while I’m a bit late to the party, I felt like showing the changes I made to him since I personally feel they look good with him.

Well this is a real nice callback to '01, and it’s never too late to be creaaaatiiiiive !
Anyways pretty compact build, maybe a tad to much around the thigh area, i’m not sure about those silver peices.
Other than that, real solid, nice job.

Really good, but (what I assume are) the 02 claws look like actual fingers.

@The_Baron
Thank you very much for your input, I tried making him look more comparable to his original incarnation without making him look too cluttered or too too lower body heavy, which is why I removed the bushings around his thighs to bring his hips in a bit more, but still give him much wider legs than the rest of the Toa so he really felt distinct.

As for the silver pieces, if you’re referring to the parts just in front of his torso armor in front of his crotch, those were purely put there to cover some unsightly ball joints that would have been exposed otherwise. I can see how they would look out of place just sticking out there, though I personally don’t have much of a problem with them since they fill out a bit.

@Vyran_Kal
I intended them to look like his 2001 fingers rather than the claws he had in his Nuva form if that is what you mean. Although, I can see how a lot of this resembles his Nuva form a bit more than his Mata form, I was just trying to keep the 2015 aesthetic while giving him more of a 2001 throwback feel.

its ok you made it just in time ! not everyone has the 2016 sets yet

i’m really liking the changes it reminds me of the 2001 Pohatu and you moved the gear box to bring in the old function ! good job

Indeed I did, How could I not? Pohatu had a gear on his butt before it was standard, so it had to be added for that extra throwback, and to broaden his hips a bit to make him stand out more among the team. Granted, someone else more than likely did the same thing somewhere, I just never looked at anyone else’s Pohatu revamps or MOCs until after I made mine so I wouldn’t feel like I was just copying anyone else.

The MOC is very creative and captures the 2001 Pohatu better than most of the ones I’ve seen!

Thank you very much, it actually took much longer than I thought it would for a few changes. I originally tried turning the whole body upside down though then there was an awkward ball joint at his crotch so that ended that one, then I started fiddling around with everything to find something that would inspire me in the hopes something that would click when I finally tried clicking his gearbox onto the lower body to which everything formed itself from there.

I clipped on the chest plate and then started working on the legs to make sure they were bulked up nicely to emphasize his leg strength, his boomerangs were turned into his toe extensions since I saw a few people do that in reviews of the set, I removed all lime green from him since I really hated the combo of trans lime and brown, replaced his eyes with an orange stalk like he had in 2001, made the armor around his hands larger to make his hands look a bit bigger, then I filled in the back and extended his neck. I removed the bushings around his gearbox connections since I just wanted his legs wide enough to give him a unique silhouette and make his upper body feel more thin yet not make his legs too too wide to the point it looks silly. I almost did put trans orange Bohrok eyes on his boomerangs as shown with the image at the bottom, though I went with what I did since it held together much better.

Sorry for the large comment, I ramble sometimes, hopefully it’s a good read at least, I could have typed much more yet thankfully didn’t since I at least know a bit when it’s too much. Probably should have just put that in the post itself. To sum it up a bit better, Thank you very much for your words, that was what I was aiming for in the long run.

For some reason the back looks better to me than the front!

He looks cool, definitely like his 2001 version! I do have some problems though.

The hips feel a little too wide, and I don’t think it looks very good here. Also, I feel the chest would look better facing the right way, but maybe angled slightly to retain the hunched back. The fingers are a nice touch, but they look odd as claws to me. Maybe replace those with Exo-Force arms.

But overall a really nice 01 version of him!

I’m sorry to say that I cannot thin his hips any, if I did then they would be no use for the gearbox since they would just be the width they normally are on the figure out of the box, plus he just has to have widened hips to give that unique physique he had back in 2001 otherwise he just wouldn’t be Pohatu in my eyes. As for the chest piece, I don’t know how much I could really do while keeping his silver plating. However, to give benefit of the doubt, I did try your suggestions, or what I interpreted your suggestions to be, and the end result was this. 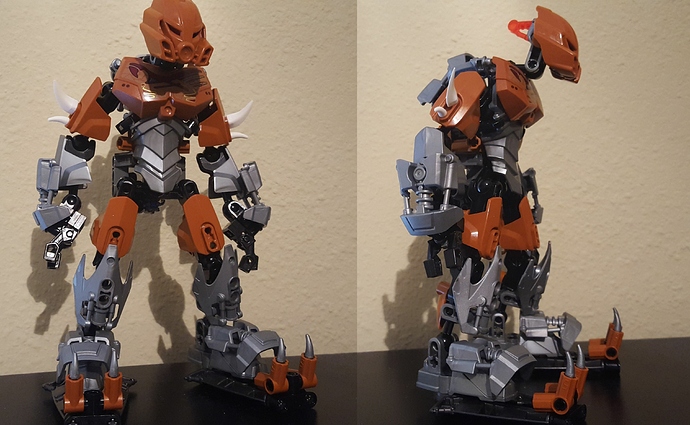 Upon thinning his hips, changing the fingers, and the chest plate without removing the silver armor which is holding extra back detailing on it, this just does not look like Pohatu in my eyes anymore. Normally I’ve agreed and taken inspiration from what you tell me, but with this one I have to respectfully disagree with your suggestions. He loses his unique silhouette and look without the hips, the upside down chest plate made his upper body look more thinned out, and the fingers work, but they are just too short for the kind of posing I like having him in.

I can respect your opinions on what you dislike about the changes I made, but I must disagree with them as I choose to keep Pohatu how he is in the pictures above. I mean no disrespect, though that is just my preference with the changes I’ve made with him.

he just wouldn’t be Pohatu in my eyes.

I’d have to agree with you, seeing it!

It’s cool, I can see my suggestions wouldn’t be an improvement!

Well, every idea is worth a shot, no idea is set to be bad, it depends on the person if it’s good or bad to them specifically. I appreciate the opinions and criticisms, though I just respectfully disagreed, and wanted to show my points for doing sow in a visual form. Either way, thank you for the suggestions.