Last week I bought the Howling Peaks DLC, and I found it to be very difficult. The first level took me about a million tries to beat, but that may just be because my weapon/armor ranking was far below what the game recommended for that level.

But the “Gale Sanctum” level is the real hitch. I’ve found it very easy to pass the first area: you flip a few switches, activate the wind that awakens the golem/boss thing, then enter the door. You don’t even really need to fight the boss-you can just go in the door.

Inside is where you’re supposed to do the “learning to fly” objective. My problem lies here. 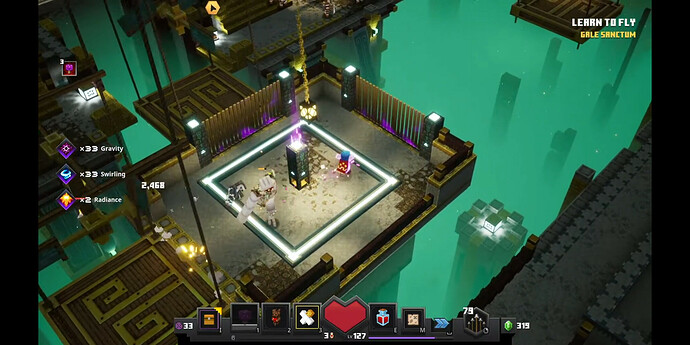 This is a screenshot from a YouTube video, as I don’t have my Nintendo Switch on hand.

It’s obvious that in order to progress in the level, I have to open the gates. But how do I do that? I can’t seem to interact with the switch (?) in the middle. The YouTube walkthroughs I looked up say you have to keep fighting and killing the monsters that spawn until the gates open. Well, I did exactly that, but the monsters just kept spawning in, and the gates stayed closed. I frequently find myself retreating back to the other floating island so my potion can replenish so I can regenerate my health. But I always seem to get killed before I can reach…whatever the monster-killing quota is.

So what am I doing wrong? Do I need specific types of gear? If so, then which ones? Or could this just be a bug in the software?

A post was merged into an existing topic: Minecraft Dungeons