Here is a topic where you can discuss pieces from Bionicle or any other lego themes that were questionable in terms of usage, appearance, colour, or were just downright terrible, like this piece.

Seriously though, why was it changed to red in 2007?! They were just fine being black before! Was there ever an official reason stating as to why Lego changed it?

Was there ever an official reason stating as to why Lego changed it?

I'm not sure if this is 100% true, but I believe LEGO did this so that kids could build the sets easier, though also because kids would be able to locate them easier when searching through their LEGO bins/parts collections

I never owned any of the Hordika, and only now did I take a good, long look at the torso... It actually looks pretty versatile, even more than the larger, clunkier Metru torsos...at least for my style of Moccing....

It's like a slimmed down Inika torso without the balljoints...maybe the Inika torsos were based off of this!

Even on its own the piece looks pretty cool, reminiscent of the Mata torsos especially with the midsection with the exposed "spine" and pistons; giving the impression that there is waist articulation

@Stoax that's what I thought too, but it's strange that Lego decided to undergo this change so late in the game, as if they didn't have this issue during 2006 and prior.

I think that red pins are okay. I like the accent they bring.

it has some mocing potential but very underused.

All those wacky, forgotten heaps of over-specific technic pieces.

I've never seen any of those pieces in my life.

Well, I was going for the most outlandish pieces I could find. But I definitely have my share of unusable parts!

I have brown pieces of the one in the middle... I have no idea where they're from...

Yeah, those pieces were ones I never understood.

Apparently it's called a Technic Changeover Catch and is frequently used on huge technic sets.

It was used on the Muaka and Kane-Ra set surprisingly.

I have brown pieces

The brown version comes from only this set

You know, for as much crap as people give the Inika and Piraka build/torsos/pieces, at least they did allow for more MOCing versatility than some of the earlier body types. Although I guess it would just depend on the MOCer's imagination.

Anyways, the weirdest piece that I can think of right now is the new armor clip-on piece that comes with the Skull Villains. You know the one I'm talking about, the hollow gunmetal bulge thing. It's just so obnoxious, I can't think of any creative uses for it.

It's just so obnoxious

It's as if someone took this piece

And put it in a high-speed blender, resulting in this:

The Rubber Holder from the Bohrok. It's not that there not somewhat useful, it's that for the longest time I had no idea why it existed. Who else got these in their Bohrok and thought, What the heck are these for??? 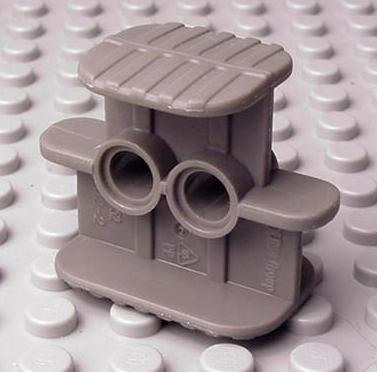