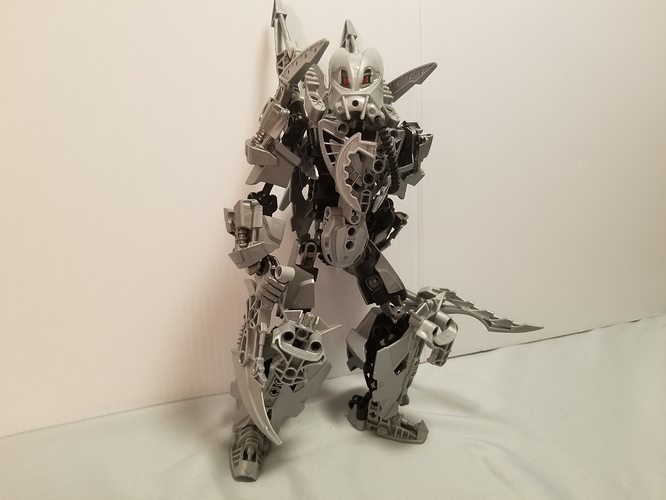 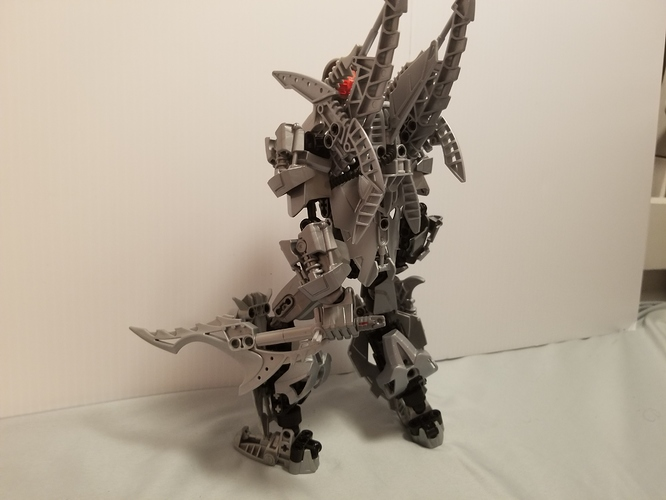 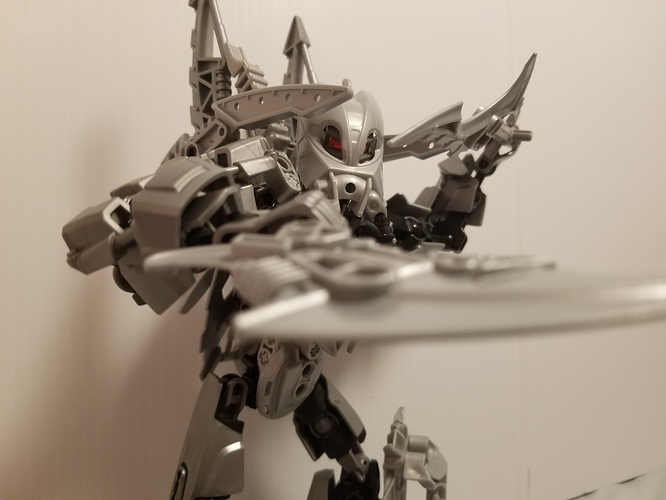 Bio: Reaver, as a dark hunter, or would have been had they existed. Reaver was once a toa of iron. He was however, unfortunately assigned to protect Makuta Spiriah. As such, he was assigned to assist in Spiriah’s experiments, that is, until the day he became one. Spiriah had been doing experiments in elemental energy, manipulating it, countering it, and erasing it from existence (These expiriments lead to the eventual beggining of the Shadow Takanuva army). During one of these experiments, he forced Reaver to have his elemental energy drained, and a limiter placed on him to prevent him regaining it. The results were fascinating, the loss of his elemental energy lead to a decrease to general strength, stamina and tenacity, but also allowed him to absorb elemental energies of other types, though he cannot generate more energy of that type. Now that the experiment was over, he was dumped outside Spiriah’s fortress, discarded like a used paper towel. Reaver swore to get revenge. Abandoning his original name, he hired himself out as a mercenary, collecting armor from defeated opponents, and buying more in order to beef himself up. As a side effect of the experiment, he also lost the ability to use kanohi, so he merely gave himself one that was known for it’s fear factor, only made it powerless. He modified his armor, so that it can absorb elemental energy, even if he isn’t focusing, and it’s fed through a tube to his brain. At one point, a shadowy woman entered a local tavern on Stelt, offering him job. When he asked what the job was, she told him makuta hunting. He of course, was onboard, and thus began Trulkia and Reaver’s adventures.

[image] [image] [image] Hello darkness my old friend.... [image] Smokescreen! [image] Dark Blast! [image] Small wings hidden in the cape. Name: Tulkia Gender: Female Species: Makuta-Toa of Air half-breed. Abilites: Moderate control of Shadow and Air. Minor Shapeshifting abilities. Access to some of the Kraata powers, namely; Weather Control, Hunger, Quick Healing, Laser Vision, Accuracy, Power Scream, Silence, and Sleep. Small wings behind cape, but are incapable of giving her flying or any appreciable gliding abilities. Kanohi Mahiki. Bio: Tulkia, is a half-breed. Her her Father was a toa, mother was a Makuta. So sad, but she's okay with that now. (I hope someone gets that joke) Tulkia's mother, the fearsome Hetrilka, was the lone ruler of a small spit of land in the sout…

and the concept is great too

In hindsight, I agree, he could probably use a couple tires there.

And I appreciate the compliment, It’s always my goal to try and blend the two systems as best I can.

Yeah, blending ccbs and g1 Bionicle is usually my goal. Mostly in the arms for the added poseability.