Rise Of The Demons: Ep 5 - Exposition and Downtime 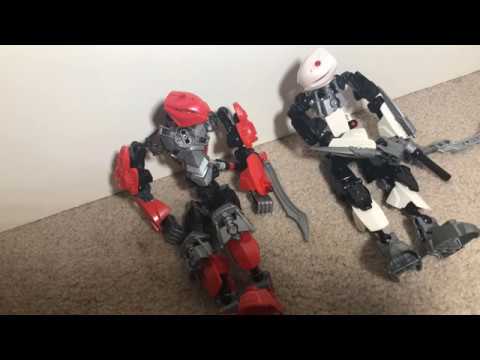 OK, so once again: good animation, nice story, bad dialogue. Most of the voices (especially the white Rahkshi’s guy, really now I can barely understand what he is saying) are pretty awkward and sometimes hard to understand. You gave an in-universe explanation for the dragon guy, but it ends up forced into the story. I am still convinced (I might be wrong, tho) that you are making up the dialogue while you’re recording, which is not downright bad, but the end reasult will almost always be not as good as what you are expecting. TLDR: write a script before you are recording.
The white Rahkshi guy also seems a little out of character. In the past episodes he was “grr I hate you and I am edgy cause I lost my brother” but now he is like “tell me everything about you come on come on come on take me with you to fight the bad guys”.
Also, you said that the dragons evolved into the Rahkshi heads. Then why is the young Rahkshi guy called a dragon? Were the dragons very similar to the Rahkshi heads to the point that the evolution is barely noticeable?
Also, you made a plotwhole there. The dragon dude (I am sorry, but I just can’t memorize their names) said that when his family was exiled it was only him and his mother, and his father previously died in a war. Where did the sister pop out from?
Also (again) this episode is the odd one of the group. It has no intro, it has only four scenes, and most of it its just dialogue. I get it that this was the intention, but you could have added a little bit of plot here and there. The audience will get bored if the only thing you have to offer is dialogue.

Thanks for the criticism