Hola, TTVMessage board!
I’ve not posted in a while because my MOC building has been veeery slow during school but I have been doing multiple projects at a time. One of them is finished here and I named it Ruccus because I’m not very creative.
(Still experimenting with lighting and using my iPhone so bear with me) 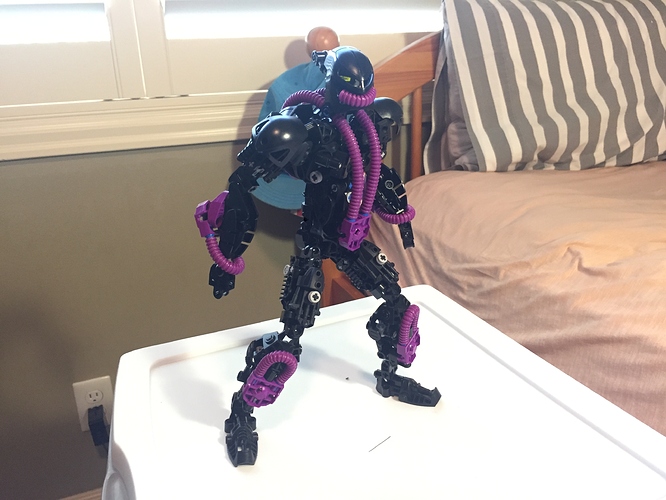 The idea here is that I want to push myself to try new things for the sake of being a better builder and with Ruccus I tried learning new ways to express muscly but accurate anthropomorphic proportions. I feel like I’ve done a descent job with that here and what I’ve learned is the importance of having a lot of those new fangled axle and rod connectors. Like this one I call “the god piece”. 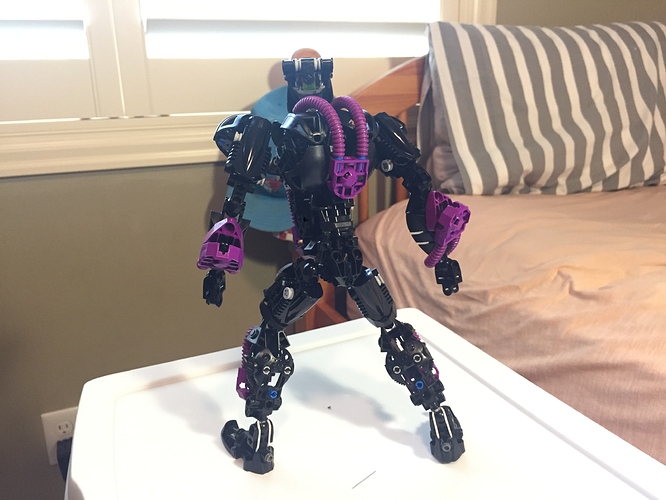 My girlfriend is a freestyle wrestler (not WWE wrestling, real wrestling, same as Ruccus) so when I decided to study accurate and detailed muscle grouping I asked her a lot how beefy boy wrestlers looked and surprisingly she had a lot to say. I think I’ve done a pretty good job with creating round shapes using plastic parts but I’m posting to find out what you all think. 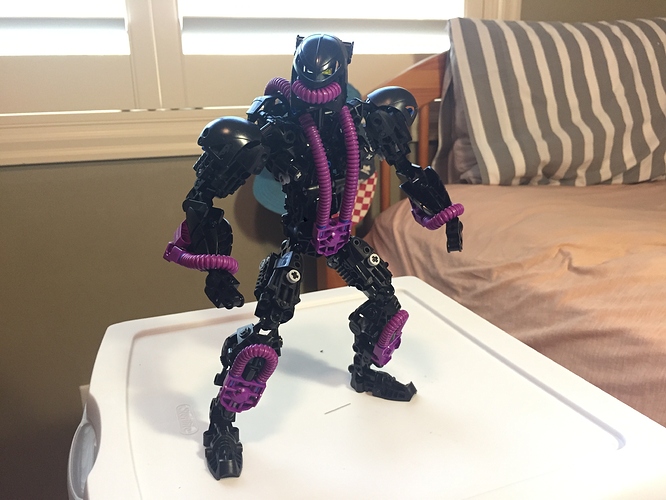 Range of motion is better than just this and stability is surprisingly good. I had fun designing these hosey-purply-armoury motif things. Not sure what purpose they serve other than enforcing the lore behind him. The idea of his presence being that he’s like something out of the movie Real Steel and is pretty much a future robot-wrestler, about seven feet tall or something like that. 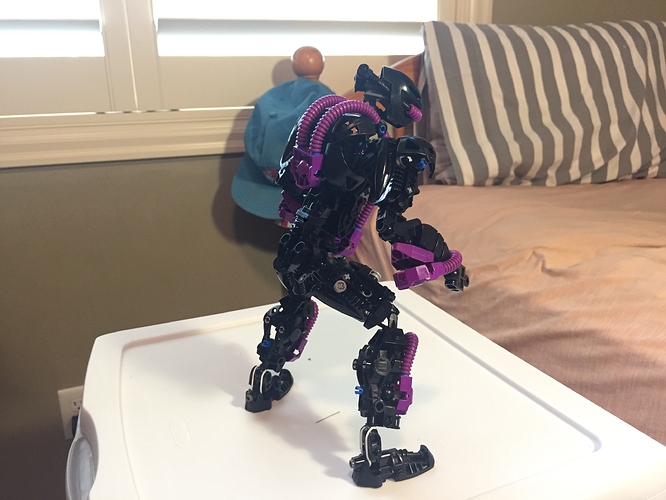 There’s not much to him. Brief story and pretty simple idea. I still only build with old-Bionicle parts and modern Technic so I have a huge challenge when I say I want to make a MOC with smooth muscles. 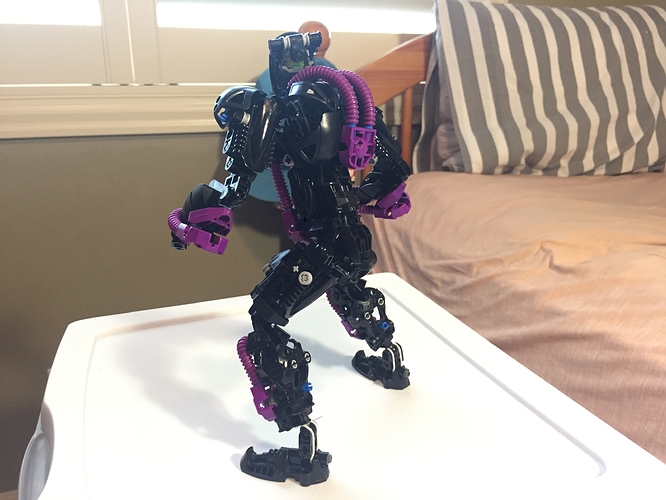 The butt is an important part of a wrestler’s total physique and I feel like I did it decent justice with the thigh parts fitting into the space around that triangular piece. 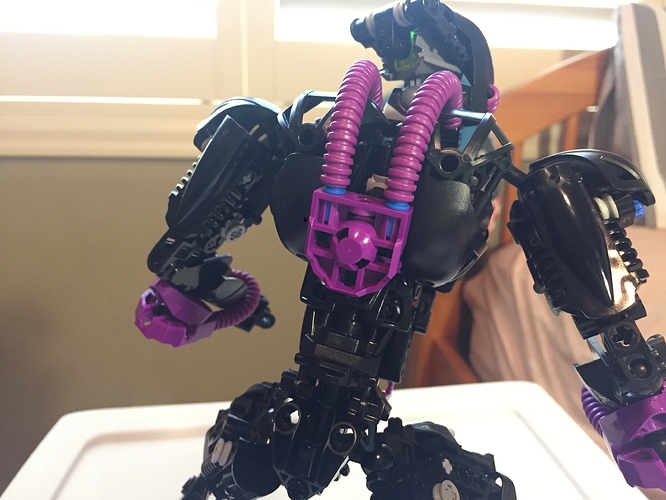 I think the back was inspired by some kind of standardized butt-design that I can’t recall the name of but it involved cutting parts or something and my laterals here don’t bend or cut. I did have to wait a while for those smooth round old-Technic part to arrive from Bricklink in black. 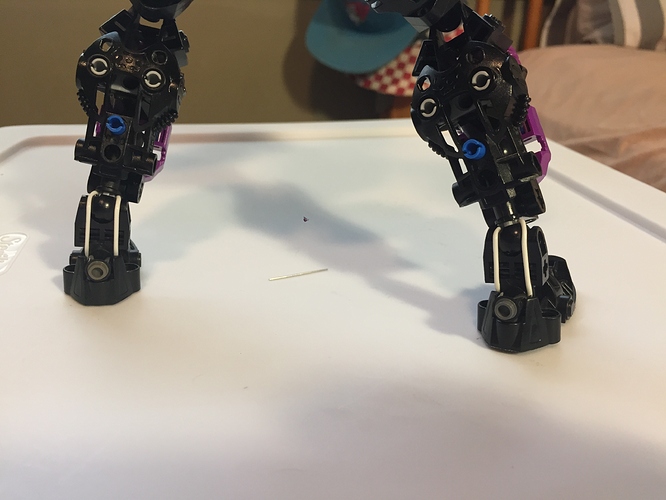 Finally, a keen eye would have noticed these bands here. This design actually comes from another MOC that is semi-close to complete. It’s a technique I’d love to take credit for but I’m not sure if anybody else has found the technique before me. Basically I use it in these ball-joints-to-sockets connections to resist motion one way and not the other, an effect muscles have on our body. This guy’s feet caved forward a lot, as a wrestler and as a MOC that’s not acceptable so I implemented this technique to force the feet to resist rotating upward.

But that’s all for Ruccus. Thanks for checking out another MOC of mine and providing critique, I’ll be back with more soon.
¡Buenas noches!

Words cannot express how much I love this moc. I appreciate the decision to throw in mata purple which is a very nice colour that Lego sadly stopped using. the only thing that feels off is the white colour of the bands. Everything else is great and Im excited to see the other mocs

Really nice moc you got there it is so amazing

Thanks, @RogueToa, and @Tarkur, much appreciated.
I’m glad you like it, @PeppyBricks, and I’m glad you appreciate my attempt at representing an underrated sport, @nexolo.

As a wrestler it awesome to see someone make a moc inspired off one.

The muscle shaping is amazing especially in the legs.
Nice moc and good job

This is fantastic! I adore the purple pipes, and the one used on the Miru just look wonderful. Almost like a real creepy smile. Nice work.

Ah, much better. Seriously though, this just screams wrestling and made the moc 10x better for me XD

Indeed, that shade of purple is pretty great. I wish they would bring that back.

I love the color scheme and the use of the tubing thru the Miru!

(I wonder if that qualifies as sacrilege in @Eljay’s book)

Can we have a wrestling robot moc contest now?

Time to get real
Real Protosteel

with the tubes and whatnot, he looks a bit like Bane