First time on the Message Boards in a while, figured I’d show what I’ve been working on.
Introducing Rynarii: Toa of Gravity! 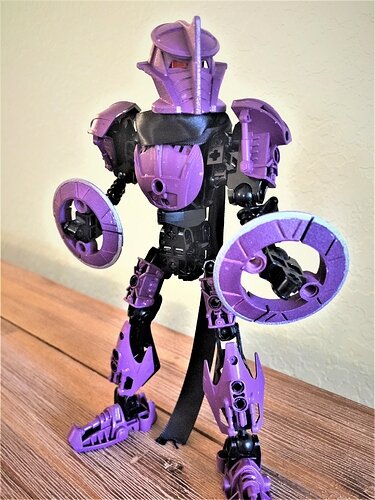 image0 (3).jpg2448×3264 1.49 MB
A former matoran toolsmith on his home island, Rynarii made a name for himself with his fine craftsmanship. He primarily made a living by creating and repairing items for the island’s native matoran, but once every millennia or so he would be visited by a Toa asking for a new tool. These Toa bring with them tales of the world beyond, and one fateful day, Rynarii met a Toa who told him stories of the Nynrah Ghosts. Wishing to learn the secrets of the Nynrah crafters, Rynarii sold his shop, bought a boat, and left his island in search of Xia, the location of the Ghosts’ nearest outpost. Upon arrival, Rynarii pleaded with the Ghosts that they allow him to learn among them, but the answer was a firm “no”. Downhearted, Rynarii returned to his boat only to find it claimed by Xians. Widgetless and without home, Rynarii resorted to begging for food and money in the streets of Xia, a tedious task as the Vortixx are not particularly charitable. He would occasionally find an odd job to do, but the pay was never fair and the job was never easy. Rynarii had lost hope for a better future when he was visited by his savior, a Toa. Feeling compassion towards the downtrodden matoran before him, the Toa gave him two things: enough food to restore Rynarii to full functionality and a Toa Stone.

Rynarii used his new found power to aide matoran in worse situations than his own, whether it be imprisonment or slavery. He dedicated his life to helping matoran in the same way that’s Toa helped him.

Rynarii wears the Mautatu, the great mask of Charisma. (From RSG’s Shapeways) This Mask allows him to convincingly reason with others to win them over to his point of view, although this may take more time for some beings than others. Once won over, the target of the mask’s power becomes fiercely loyal to Rynarii’s cause, even after the effects of the mask have stopped.

Rynarii uses twin Chakrams for a unique fighting style. He utilizes his power over gravity to manipulate the paths of his Chakrams when thrown, turning opponents into gravity wells, making them weightless allowing Rynarii to jump on them for greater mobility, and more! The only limit to what he can do with his power is his imagination and his conscience.

As a Toa of Gravity, Rynarii has been cursed with possession of what is perhaps the most powerful element. This forces Rynarii to excercise caution while fighting, so he doesn’t accidentally kill rather than incapacitate.

As for the Moc, I’ve always loved the color purple, especially on Bionicle sets, Onepu and Nui Jaga both being among my favorites, so naturally I’d want to make a purple Metru build. The purple I used is Krylon Rich Plum Gloss, a shade between modern purple and old purple. I also gave him a scarf because scarfs are cool.

Comments and criticisms are appreciated, I want to make this guy the best he can possibly be!

Looks great! Mainly the color scheme, but I like the build! Can you take more pictures, perhaps?

Absolutely! I was writing this from my phone, so I was a bit limited, but I’ll update it with more pictures(all properly oriented) as soon as possible!

I really like the look of this guy, my only critique is the arms and legs feel a little bare. Might I recomend this design? 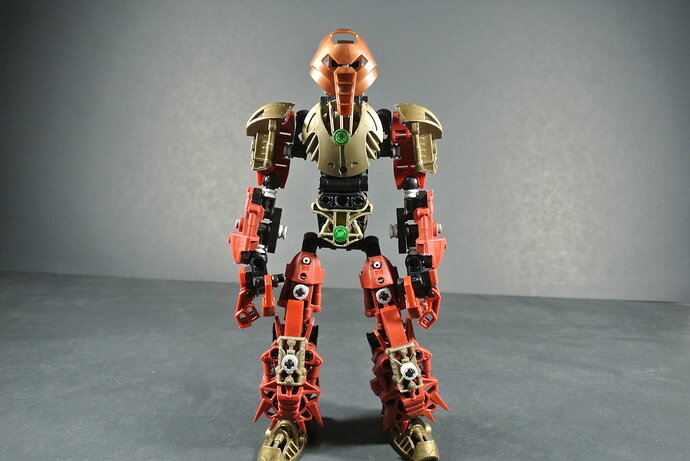 I completely agree with you, the arms and legs do look pretty simple. The main reason they aren’t crazy was because I didn’t want to stray too far from the metru build, but the design you have looks awesome and is still very reminiscent of the metru aesthetic! I’ll probably draw some inspiration from it when I update my moc.

Ooh, love it! There really are a few pieces in purple, and a MOC gets really cool! But where are those “weapons” from? Are they from shapeways?

I made them myself, they’re available on my shapeways store, ironically called Nynrah’s Cache.

Mask looks really cool too, that’s a pretty good design, how are the weapons getting in the hands? They seem like…blocked from the beggining and on forever…

The weapons are two pieces, if you look closely, you can see where they are split.

What a fool I am, finally got it!

Your welcome. My intent was to update the meteu build. I think the torso on tour moc looks great, so feel free to pull and designs you like. The legs are more complicated, but I’m sure there is a less parts heavy alternative.

Something about your building style just screams Bionicle to me. It’s a sort of energy I strive for in my own MOCs, but I never feel like I can get it quite right. Thank you for making something so wondrously nostalgic for me once again.