Salva.ge M.E.C. Alternate Build (Okay, I might have cheated a little bit)

So, I’ve intended on putting this guy up for a good while, months before now, actually, which will explain the stark contract between the presentation of my previous submission, to this one. The reason I hadn’t was caused by this issue with the profanity censor in titles of submissions. For instance, it would look at “salvage” and see “sal***e”, and censor it as though it were the curse typed by itself, and this STILL hasn’t been fixed for some reason. Though that aside, I’ve had this certain M.O.C. for a while, something that’s been sitting on my shelf for a few months now, and was wearing a pelt of dust as well. Though I’m sure rambling isn’t here, it’s about the M.O.C. itself. Or, rather, alternate build M.O.C. type thing where I sort of cheated, but hey, tomato tomat… o? Okay, that only works when you’re pronouncing it verbally, but whatever.

So, bit of apologetically lengthy setup here, just skip to the line further down if this doesn’t interest you.

Ever since BIONICLE’s release I’ve gravitated primarily to that branch of LEGO, that would be until EXO-Force came around, but otherwise I’ve stuck with the sentient bio-mechanical beings exclusively for the most part. I’d rarely get brick sets, which could be shown by my extremely lacking system collection, though somewhere between mid to late 2016 I saw a certain set that gave me some pretty pleasant memories. The Salvage M.E.C., something from the Ninjago line, which I chose to completely ignore since I was never interested in ninjas (Plus, nothing personal here, I also REALLY didn’t care for the show). Though in this case, I’d be lying if I said it didn’t catch my interest. It was a darn hacked together (Yet suspiciously symmetrical for the most part) robotic suit. I haven’t seen a LEGO mech suit that big since EXO-Force, so without hesitation, not even caring about the fact it was from Ninjago, I threw some cash at the checkout counter, and then ran out the front door to build this thing back home.

Short answer, I liked it. There was room for improvement, but I liked it a lot.

I tinkered with it, added knees to it, bulked it up more, and I did a lot of customizing to it overall. It was fun as heck to pose, but the thing was unstable beyond explanation around the legs because the knees were ball joints. My mistake, really. So, eventually, it fell and shattered like a vase in a house with a cat. After reenacting the Star Wars episode 3 scene with Darth Vader as I stood above the remains of what was once sitting on my shelf, I picked it up and heartlessly began breaking it apart to make something new (Because in no way was I going to be able to put that thing back together, I had already ditched the instruction book by this point, nor did I fully remember what it looked like pre-plummet) thus was born this! 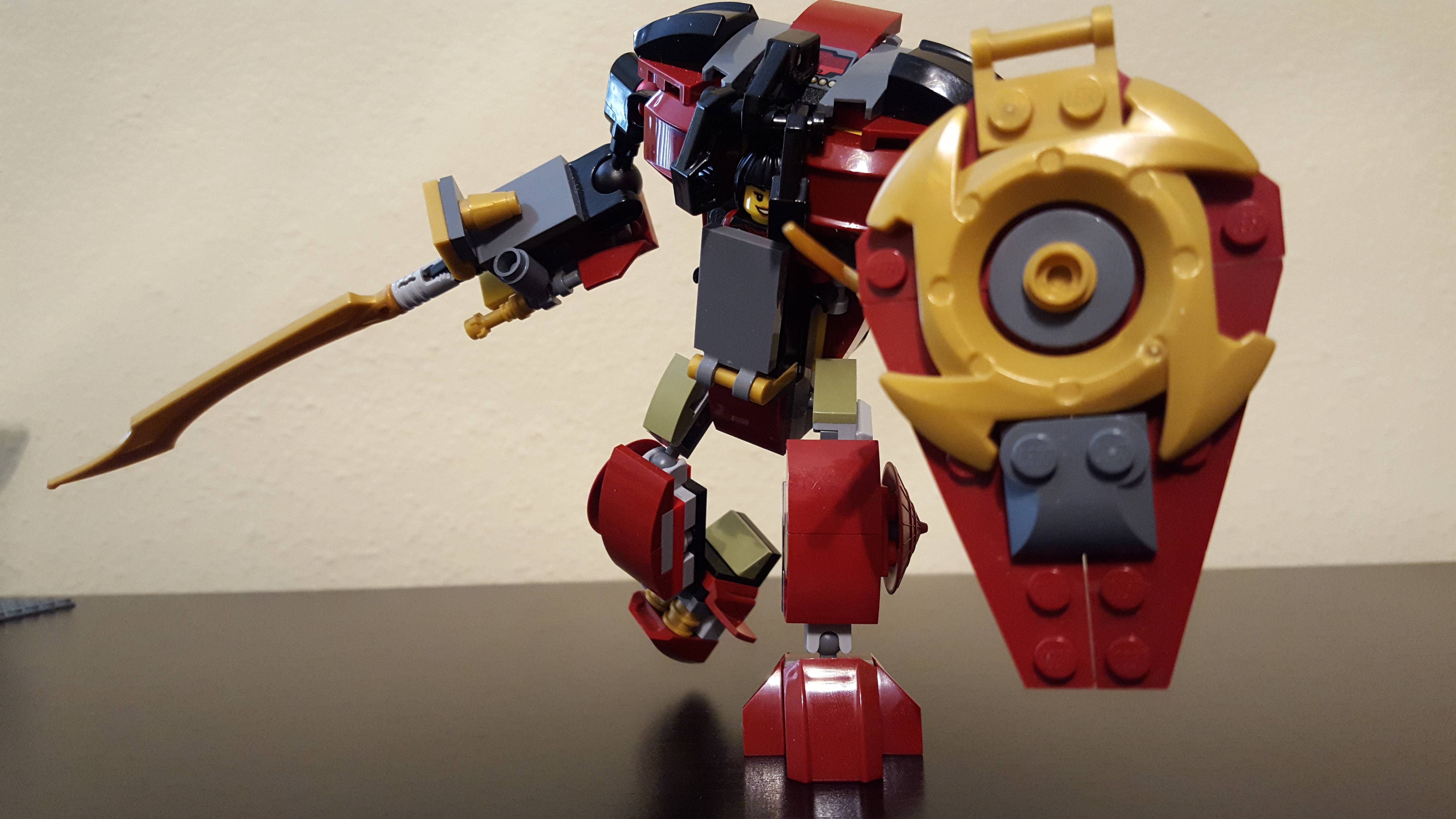 A Salvage M.O.C.! Heh, get it? Because M.E.C. M.O.C. I swapped a vowel, and… Ahem, never mind. I’d like to hope just seeing that image brings some EXO-Force vibes, because I took much inspiration from those sorts of mechs while making this. The frontal exposed pilot cockpit on the chest, the arms being higher, if not head level with the pilot seat, and having the basic articulation you’d expect back at that era, just minus ratchet joints this time due to the size. 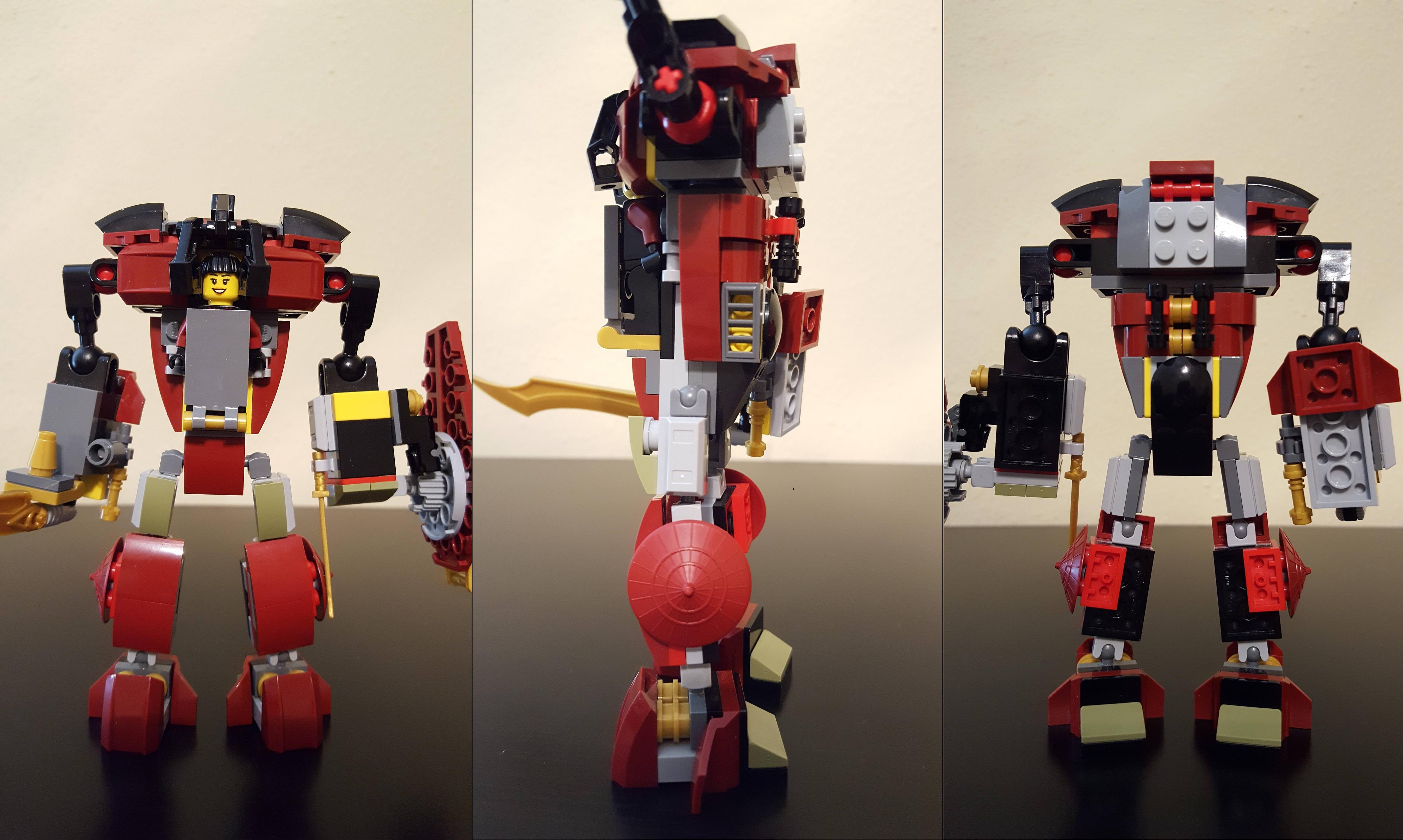 It’s not perfect, some parts like to pop off a lot like those hats on the legs for example. I was going to add EXO-Force robot claws for handles, but there wasn’t enough room for them to click in, so the hinges just became detailing. I originally planned to make the usual setup of one melee weapon, and one blaster, something to cover long, and short ranges, until I noticed I had an extra socket joint, and a tow-ball with a plus axle on it. That lead me to add a shield as well, upon the same arm as the blaster. Oh, and I almost forgot, it even has storage for its’ own weapons! On it’s back, to be exact. 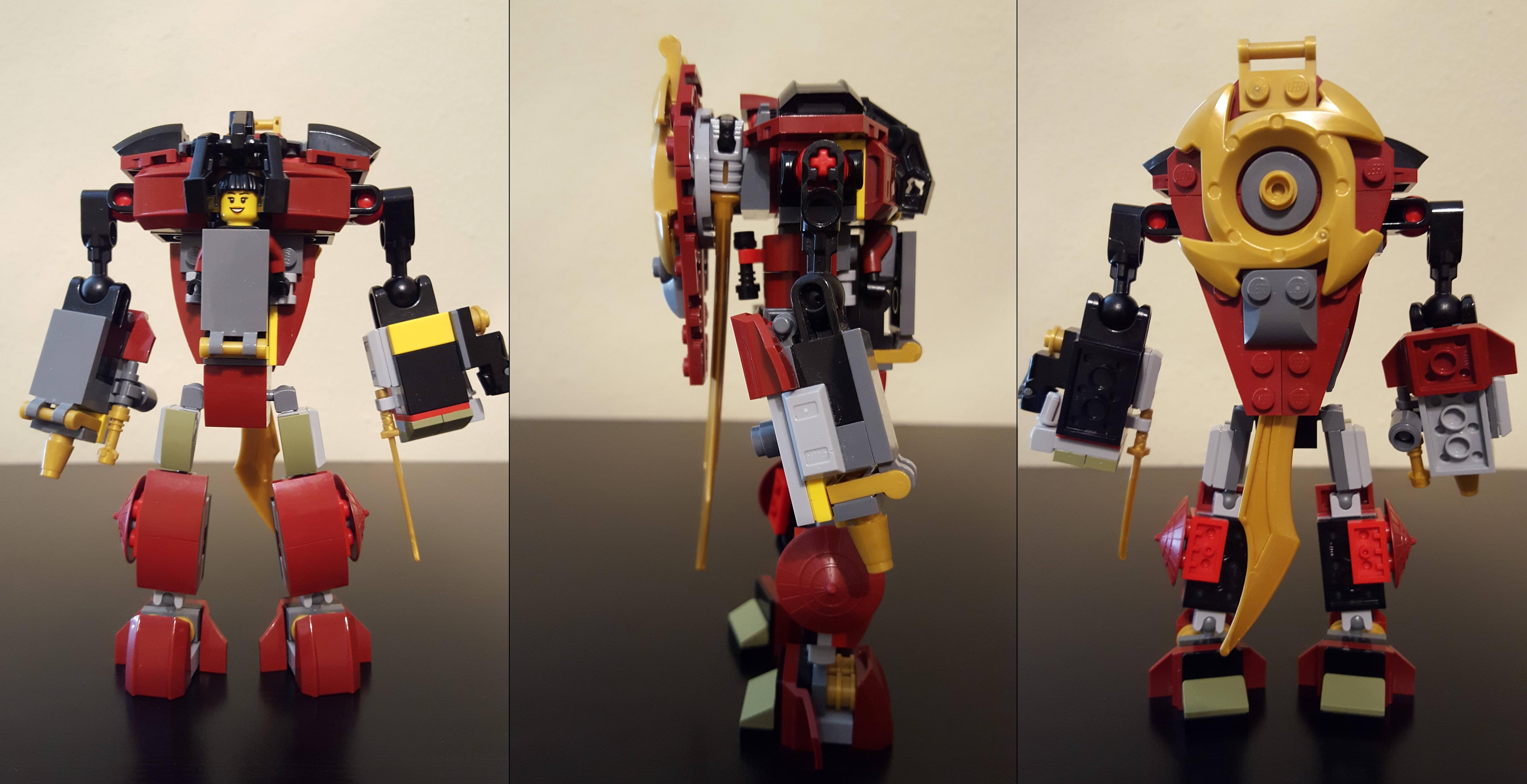 Sure, the sword it mostly held through friction and Gravity, though it works out well enough to where I don’t think it matters that much. It only really becomes a problem if you want to store the sword without the shield. In addition to that, when the sword is removed, the arm can also turn into an additional blaster which can be used with the shield in place of the sword for long distance fire fights. Also, the light saber handle on the inner arm can be used as a flamethrower, because overkill. 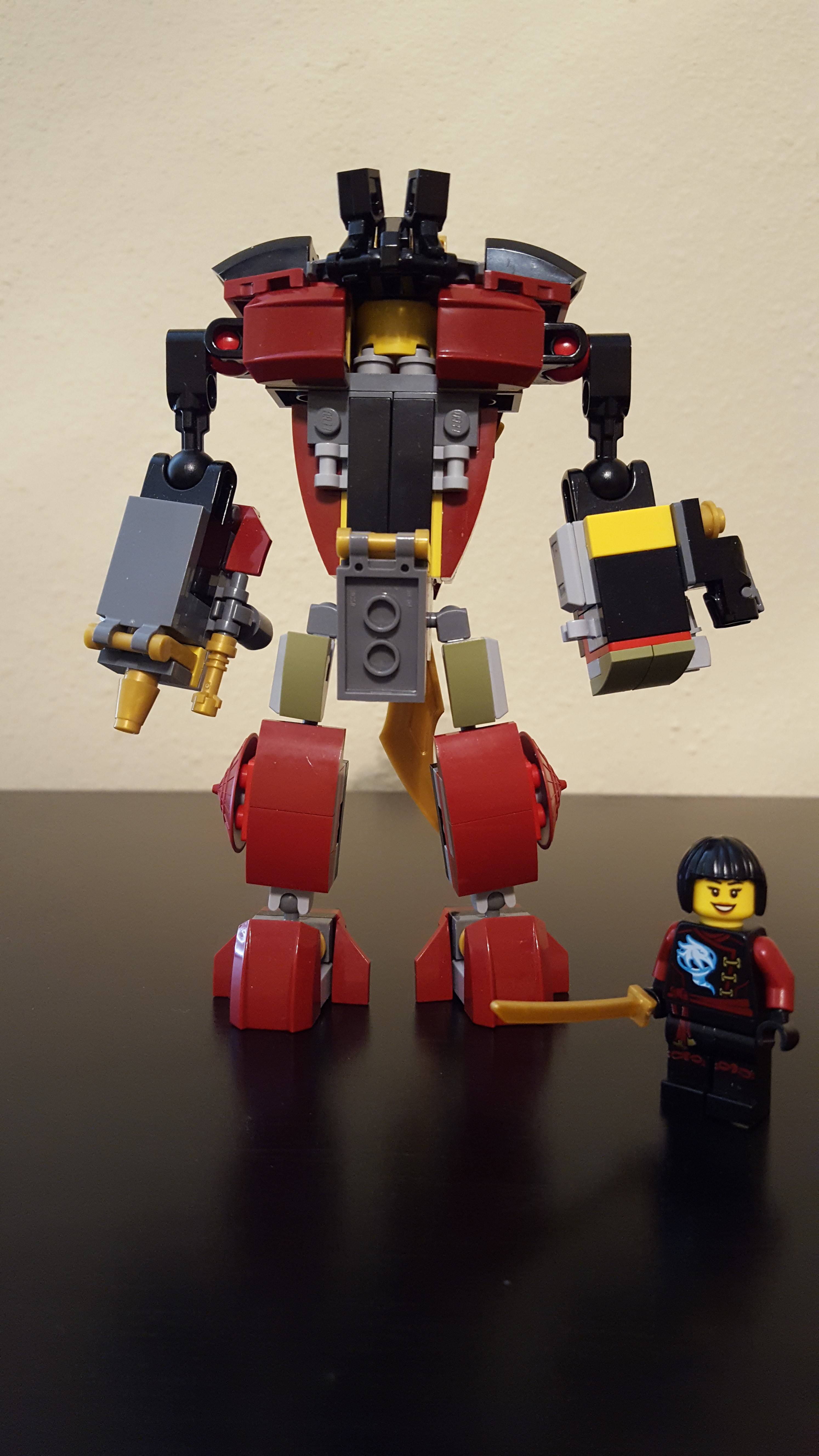 You can see by the image above, the way she exits the mech is when the telepathic scanners lift from (roughly) over her temples, severing the linkage of her and the suit (My way of making up for no hand controls. Plus, it shows a visual display only seen from the pilot’s perspective), and when the frontal protection plate, and pilot fastener opens downwards. You know, future techno babble

“And guess what?” He said improperly starting a sentence with a conjunction.

The mech isn’t all, I’ve also made another little fellow to go with it, because there is still one minifig on the good side left. Behold!

This little fellow is just a high speed, single seat flyer with sharp edged wings, twin thrusters, and assorted wings, fins, and stuff of that sort. It had the two blunderbuss-like guns on it as well, though I later removed those since the colors stuck out.

This was more of a “I still have these larger pieces left, what can I make with them?” build. “Tablescraps” I think they call it? Honestly, I’m happy I made this, because it plays with the mech rather well. Remember that spot on the back of the mech? You know, the uncovered one revealing 4 studs? That’s not only for weapon storage, the plane can actually attach to it, turning it into- 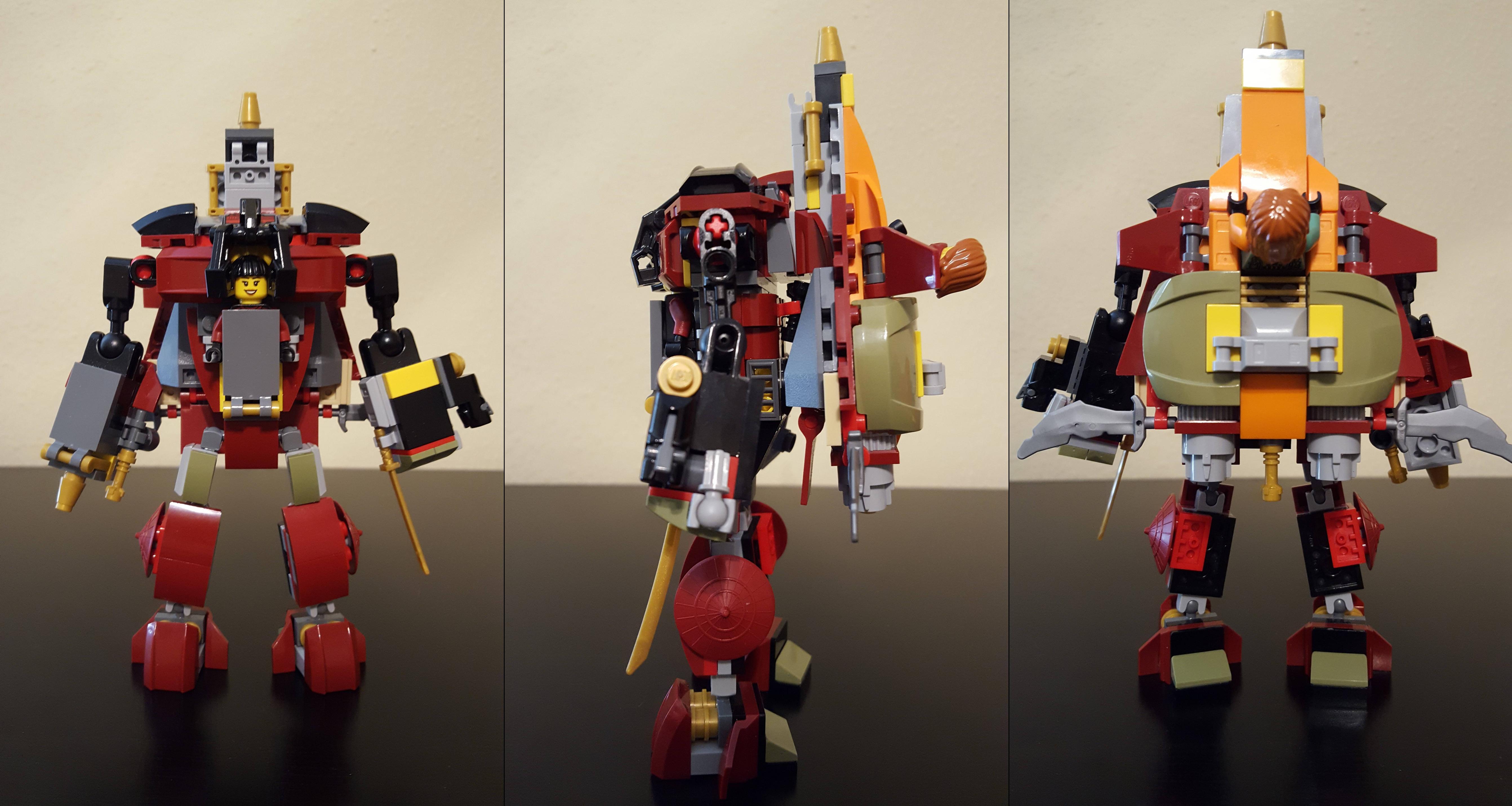 -a big jet pack! Well, of sorts… Which just so happens to have a guy sticking out of it. It’s mostly for horizontal flight, but works vertically if you ignore the guy, or just take him out. Either way, it works pretty darn well in my opinion, fits nicely, and you can even store the weapons on this assembly, too. Just take the sword, stick it into where the shield would be held, bend the sword at the hinge, and then it clips onto the ship’s front, making it-! 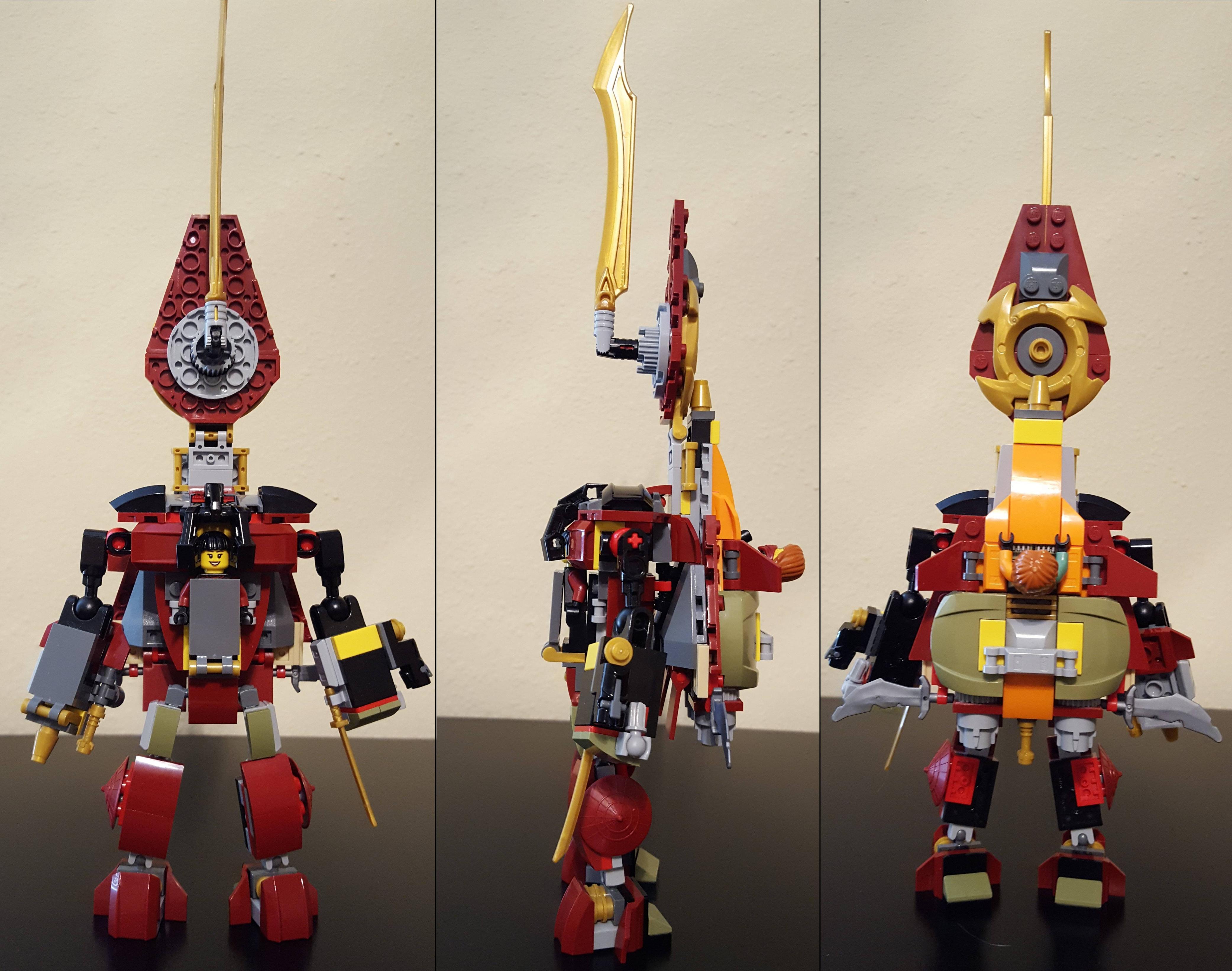 -Kind of… Awkward when it’s standing. However, it’s not really meant so much for that position, as it is for this one. 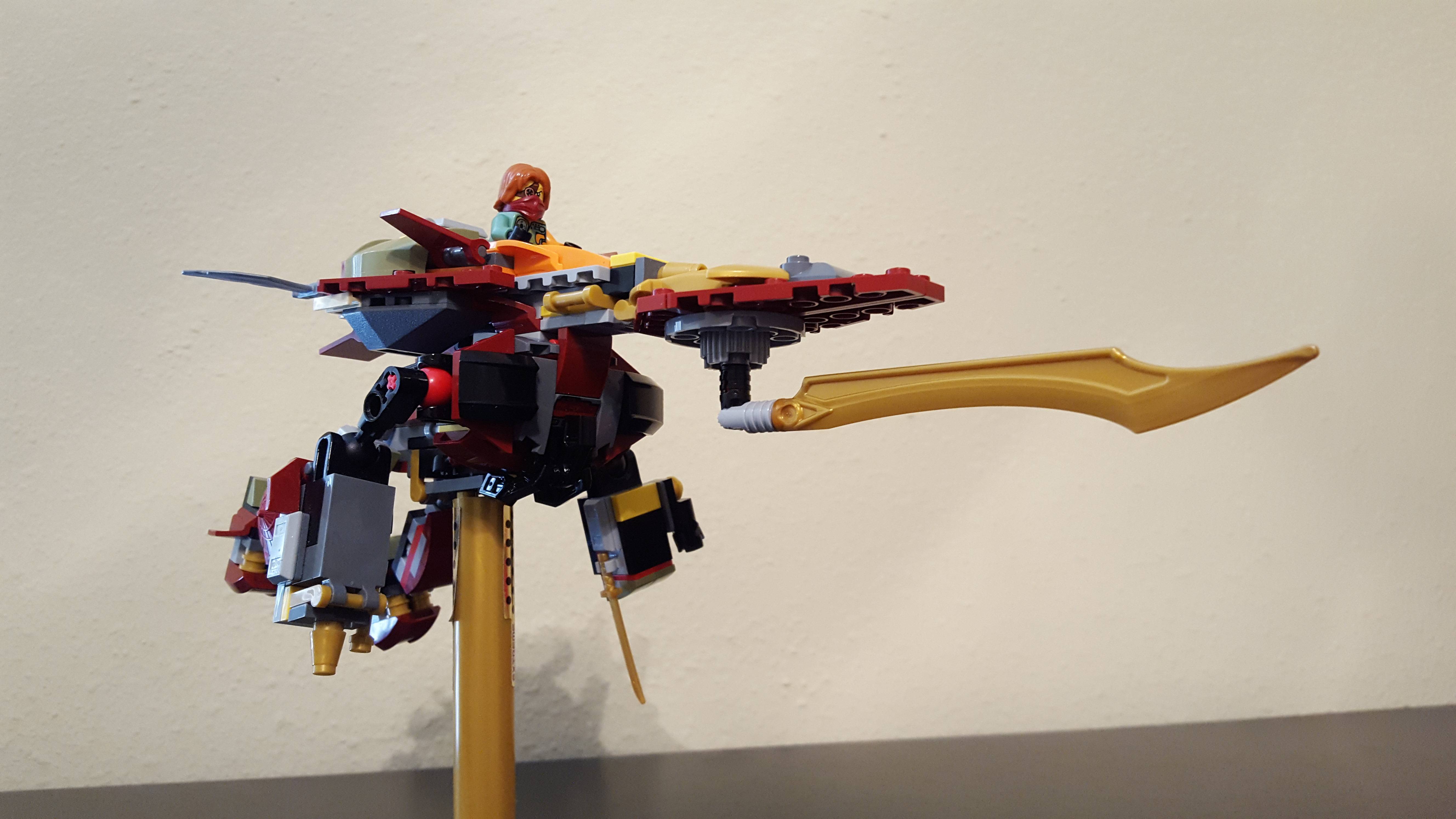 I like to call this “dropoff mode”, I imagine in this set up the plane carries the mech where it needs to go, to which the mech detaches to plummet to it’s destination, the weapons soon following and separating, allowing it to catch the two as they approach to it. I think I might have just described it as TitanFall… aside from that, there’s also a bit more, if you don’t like the whole “dropoff mode” thing, you can just rearrange the limbs to make it look like a large undercarriage/cargo hold, or something, like so!

Quite honestly, I feel this works out pretty well for the most part for technically being my first real system build. With that, I have nothing else to show about this M.O.C… It’s nothing too special compared to most other builds you’ll find, though I figured since I’ve had it built and sitting on a shelf this long, and might leave it together for a while longer, I’d go ahead and show it off here. See if I can get some thoughts on it for the sake of it, and while the set is still presumably available in stores. Might not be, but I’d like to hope it is.

Yeah, I kind of did cheat, I added two red ball joints, and one additional red 2M axle peg, so that’s three pieces not from this set I used, but I’d like to think everyone must have some of those in their bins that they can rummage for, so I still somewhat counted it. Plus, it’s just three pieces.

Anyhow, I look forward to hearing what people have to say about this alternate build of mine. That being said, thanks for looking, sorry for typing so much (I’m guess I’m a tad overly proud of this little tinker), and I hope you enjoyed it.

(I also apologize again for typing so much, once more.)

Still, I like to apologize in advance, I’ve met a lot of people that absolutely hate reading (for some reason), so best have preparations for that in a sense.

Anyways. Nice moc. Has a need build. They can just skip it too.

Thank you, It’s technically my first real system build, so I’m proud of it, at least.

True, I suppose, though still, the apology/heads up is there.