Introduction
Hello! This is HyruleMetalhead with my self MOC, Blazon. He was actually my very first MOC when I didn’t even know that MOCing was a thing and originally went by the name “Leikeze”, but was later changed due to me already having a character named “Leikeze”. Blazon is a half-Toa with the powers of a Fire Toa but doesn’t wear a Kanohi mask that has any powers (though originally, he had a mask of shielding).

Backstory
He was created in Metru Nui to assist in the Toa/Makuta War that was occurring in Karda Nui at the time. Blazon was trained by the likes of the Turaga Metru as well as the Toa Nuva in Karda Nui. He helped the Toa Nuva in awakening Mata Nui, who later turned out to Teridax in Mata Nui’s Great Spirit robot. Blazon and the Ezegans (his creators) then fled to Bara Magna in pursuit of the Mask of Life, which carried Mata Nui’s spirit. Blazon then arrived on the desert planet and the adaptive armour that he was fitted with in Karda Nui changed to that of a Glatorian’s, to adapt to Bara Magna. Many events transpired on Bara Magna afterwards. After Teridax’s death, Blazon and the Ezegans returned to their home planet where he was then given the name “Blazon”, as they had regarded him as a model warrior. Because Blazon was created from genetically splicing the king of Ezega and Tahu’s DNA into a “clone” of sorts, this meant he was also their prince. Blazon would fight many wars under the Ezegan banner as one of their knights, but it was until he had successfully united Ezega with their rivals, the Codapanzians, and ended the years-long conflict between the two nations that he would earn the Ezegan throne. He is the current ruler alongside his queen and their two daughters who are the princesses, and great warriors in their own right.

Combat Info
Blazon has wielded many weapons in his career, but his current are Exalted Mulciber (his sword) and Metallum (his axe), both of which are imbued with the power of fire. EM has the ability to shoot fire from it’s blade and even go ablaze (as seen in the second picture), while Metallum can double as an electric guitar that is self-amplified and can be strummed to play various chords and notes. Being half-fire Toa, Blazon has all of the powers that one would have such as manipulating fire and heat to different shapes and forms, absorption of heat and flames, etc. He also has the spirit of a phoenix imbued within his body that allows Blazon to revive if he is killed in battle, though the duration between death and revival can vary and is given a 500 year life span as a side effect.

Additional Notes
Blazon’s design takes heavy inspiration from the main protagonists in the Fire Emblem series, namely Ike, though a bit of a Roy vibe can be seen from this as well.

Anyways, this is all I can the information that I can muster without going into too much detail or even ramble on about. So, thoughts? 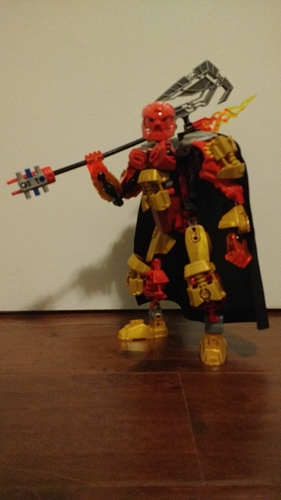 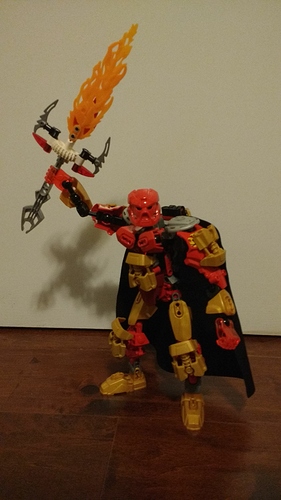 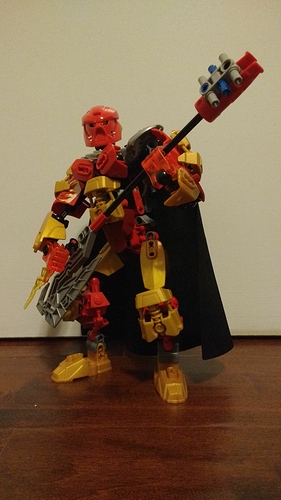 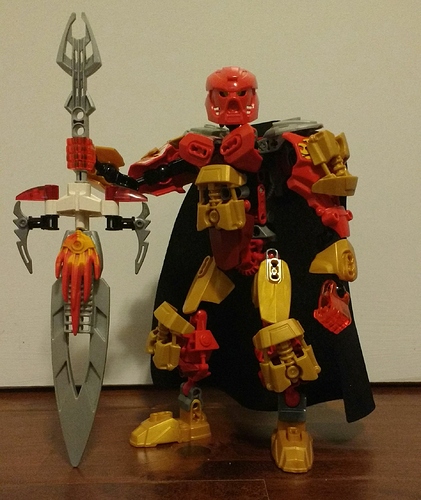 Lower legs aren’t very good.
Maybe try to take the 2015 add on out of the torso and find any other way to armor it.
His sword has a white hilt.
I dont liek itttt

Other than that, this gets around an 8.

Love the colour scheme, and those weapons are amazing!
But the proportions could use a little work. The legs could be a bit longer and bulkier.
8/10!

Feels a little too much like Tahu, but apart from that everything else is nice. The cape and sword really look good together.

Perhaps use larger CCBS shells, or put some add-ons

I don’t have the time to go over everything that is completely wrong with the backstory, but just know,

kill it with extreme prejudice.

.
The moc itself isn’t terrible.

The way the gold armor add-on is placed with the wider side facing downward gives the appearance of a slight gut.

This MOC has a few…issues.

The chest does not look like a normal chest, what with the upper part caving in and the midsection sticking out. The upper right arm armor is unnecessarily bulky, and the ankles are completely devoid of all armor. The silver armor on the shoulders, the Metru Red CCBS piece, the trans-hands, and the white on the sword all break the color scheme. And to top if all off, it basically looks like a knockoff Tahu. Overall, I would give this MOC a 4/10 for effort.

I do like that axe/guitar, though I wish that blue pin could be switched out.