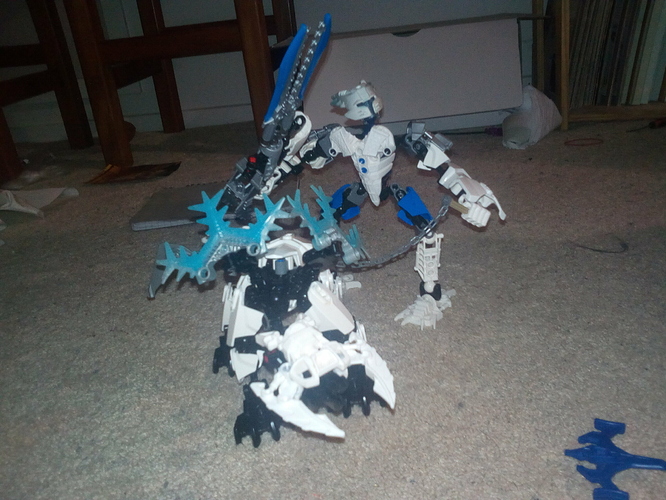 I like his pet, however could we get more pictures? i’d like to see more of the hound and if you made a custom torso with your self moc.

I can barely see anything, but from what I can see is the figures are okay. Can you upload more pictures with individual shots?

Edited Title to be much less long - Distraxx
This looks okay, I can’t see much of Frosterix, but Yukiten is pretty simple. Not that it’s a bad thing, simple works well.

I feel like you’ve got a lot of things that need a tone of improvement, particularly on the one in the back. it’s rather basic, and despite its consistent color scheme, It’s just rather bland. The forearm armor doesn’t work. it’s far too wide at the wrist, and I suppose it means the forearm itself is extremely long. Really, I think the thing this MOC most desperately needs is some decent posing, as what you’ve done here doesn’t work at all. I also don;t like the mixture of CCBS and G1 parts. The textures clash heavily, and the whole thing just looks rather basic.

On a positive note, I really like what I think the weapon looks like, but it’s difficult to see in this picture.

as for the beast, I think it probably looks good, but it’s impossible to tell for sure from this angle.

that blue thing in the corner/10

Sorry about that I cant use rather complex build techniques

This is BIONICLE not beyblade

I’m talking about the rip cord in the picture