Ok, I finally finished my first self moc, yay!

Kardax the Phoenix Toa
The idea to this was the lifecycle of a phoenix, ashes and death to life and fire then dying in a blaze of glory. 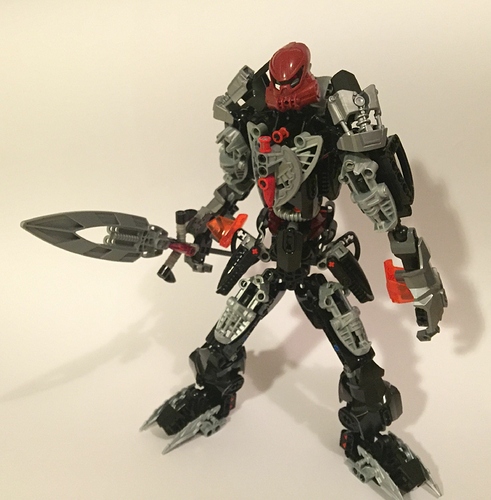 Backstory (I just sorta made it up along the way, deep breaths everyone)
Kardax was a regular toa of fire on an island far south, the matoran of the island had begun to go missing and the remaining villagers heard screams and noises in the night. Kardax and his team tracked these disturbances to the island’s Makuta, long thought to have left, this Makuta was experimenting on the matoran in order to create a stronger vessel for his antidermis. In the ensuing battle kardax and his team were merged into the prototype exoskeletons the Makuta designed, by a blast from the Makuta’s fusion cannon, due to the inaccuracy they merged incorrectly and where imprisoned. After being placed ing the Makuta’s dungeon by mutant matoran Kardax’s teammate modified their bodies using a mask of biomechanics as such that they could move again, they broke out and resumed the fight, only to be cast into 6 alternate realities by the Makuta’s olmak. In his dimension Kardax trained his new form to one day return and defeat the Makuta and befriended a Phoenix, the warlord of the island he landed on took the phoenix to use it’s energies to open a portal to the MU believing it to be a paradise. Kardax broke into his fortress and fought the warlord as the Phoenix was dying due to it’s energy being drained. As it died, it gave the last of it’s power to Kardax, transforming him into the Phoenix toa allowing him to overpower the warlord and make his way home. Home to hunt the Makuta that was responsible…

Yeah, lots of time to make up the story… anyway here is his original form: 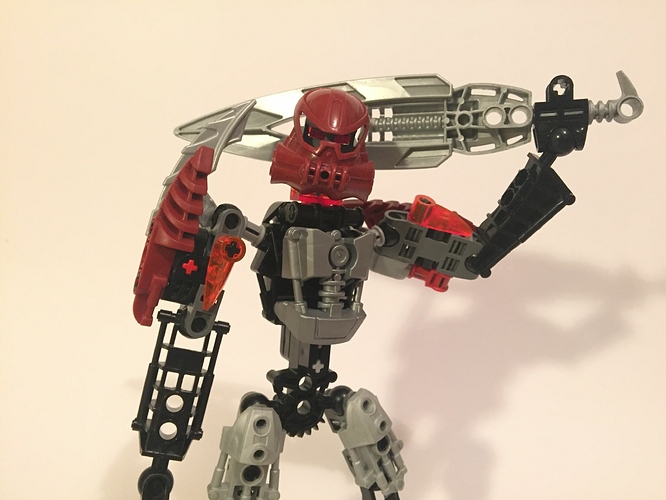 In his ash form, Kardax has barely any elemental energy and must wait for it to build up to activate his Toa of fire form, until that time he uses his power sword to fight.

More pics here, tell me what you think

Pretty neat concept. I like the build, but the torso and arms are a bit too long.

I like the concept of power rebirth, but I don’t really think of ash when I see this. I think it’s the colors. Maybe White, Black, and Trans-Orange would fit an ash Toa better?

The arms I agree with, the torso not so much, changing the size means I would have to change the armour on it. I was going with the colours of the charred forest, with mostly black, a few grays and light oranges, I didn’t use gray because silver was a more armour like colour.