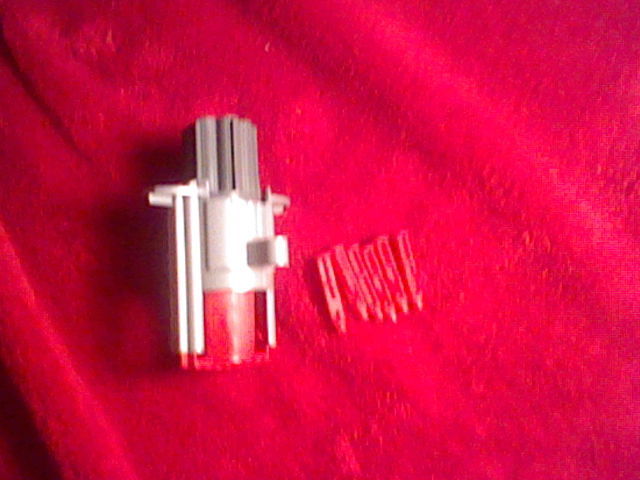 (Wow, this picture did not turn out well.) It’s just a standard yearly blaster. It fires okay though sometimes it messes up, but it seems to work perfectly underwater. Just with design alone it’s my favorite toa blaster thing.
Moving on to the mask, and mask accessories. 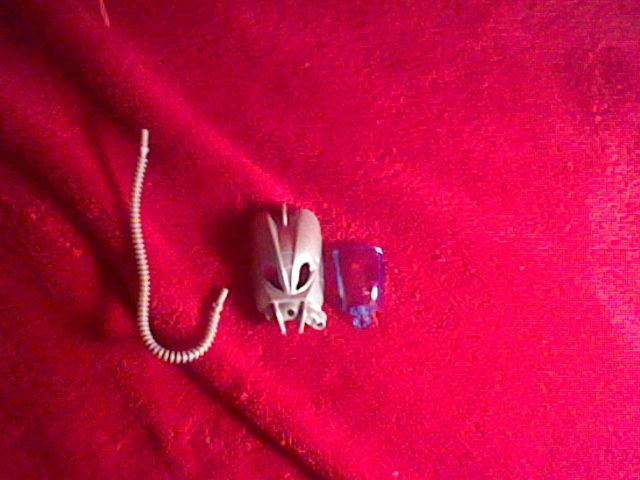 (I guess this picture turned out better.) The Tryna actually looks pretty cool! And the visor looks cool and just adds something to it. As for the tube… it’s a tube. Nothing special there. Back to the mask, it looks slightly… evil, I have no clue what it is but it just looks evil. It might be the slanted eye holes or something, but I just can’t tell. Whatever, now for the size comparison! 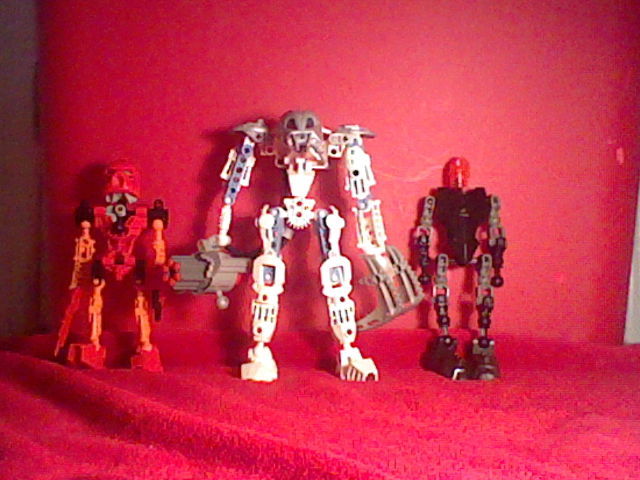 So here he is next to a mata build and a standard HF build I threw together. As you can clearly see he is a lot larger than the others. Now for the set itself! 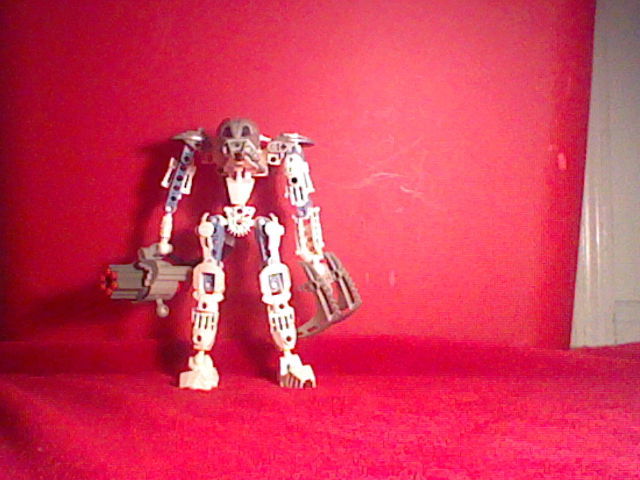 (This picture came out okay.)
Looks decent, and yes I do know his arm is flipped. So the color scheme is just okay for me. I just don’t care for that shade of blue, though the mask does look best in silver, even if he doesn’t have too much silver on him. (I realize now that the shoulder pads definitely help.) And that piece that connects the foot to the body, just WHY is it red. (I sound like Eljay.) It just breaks the color scheme. And the mata feet… don’t look that good on an inika, and that hunch, just why did they give him a hunch? Also that right arm is just too small. Other than that it looks fairly good, I like the parts on the lower legs and he left arm looks cool. Especially the claw, the claw looks awesome and would definitely be intimidating except for the part where it’s plastic. Now onto the build!

The build is mostly a standard inika build with the exception of the neck which I thought was unnecessary, but cool nonetheless. (And those shoulder pads are pretty cool.) Now for my final thoughts.

So, most of this review was me nitpicking, but I do kinda like this figure, despite what I said.

Final rating: 7/10 would kill himself again.

Final rating: 6/10 would kill himself again.

6/10 would kill himself again

Furno will protect me!

But don’t you know?
I murdered Furno.

Thanks for reminding me I need to go back and revamp a Mahri using the new blasters.

You are an absolutely fantastic person @Greencapps

im so scared im sorry if i upset you mata nui

he was saying that to be ironic

so by your logic, even mentioning Hero Factory is a disgrace to Bionicle? wow. guess I must really hate bionicle then, given how many times I’ve said good things about Hero Factory

@3shaymin6me, a general reviewing tip here: try to get a background with a more neutral colour (black, grey or white).

I believe the Technic connector piece was red because… LEGO designers didn’t have grey/white ones in their inventory at the time.

try to get a background with a more neutral colour

I usually use a white one, but at the time I took the pictures, I thought it was a bad idea to use that, and at the time I only had red.

And that piece that connects the foot to the body, just WHY is it red. (I sound like Eljay.) It just breaks the color scheme

I know what piece you are talking about, as I own the set myself, and I have to disagree. While I do think the choice of color is questionable, the foot manages to completely cover it, so there really is no break in the color scheme IMO.