Shadya Amunet an Egyptian Female gifted by the Gods with the power of time travel by just simply opening portals with her hands and travel through time and space.
Her weapons were crafted by the Ancient Egyptian Gods themselves and gifted to her as a reward for completing the Task of the Gods.

Through her time traveling days she learn modern english and modern stuff and she is very familiar with advanced technology her intellect has doubbled since she left Ancient Egypt and now is traveling through time just for the fun of it.

Her Whip can change its size only by the command of its user and if the user wishes so the Whip can also burn with hellfire.
Her spear can channel mass amounts of lightning and thunder and can create thunderstorms, and lightning tornados.
Her scythe can collect souls if the wielder wants to and trap them in a dimension leaving the souls she collects in a state of limbo.

That’s pretty much her backstory not too complicated and over the top. I thought about this right after I wrote this Moc sheet.
My main inspiration at first was to create a female moc and then I thought how about I do horsemen of the apocalypse from the Darksiders called Fury from Darksiders 3 and then perhaps do the other three horsemen but then I thought I should scrap the idea and create the best female moc I can and so Shadya Amunet was born.

So right of the bat, this is not her first iteration, this is the final version, yes but in the beginning, she looked a bit different and as the matter of fact, I have a picture to show the differences. 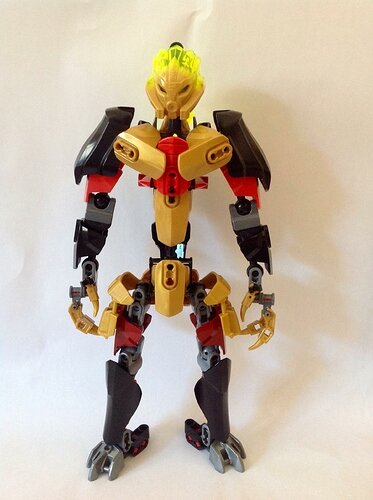 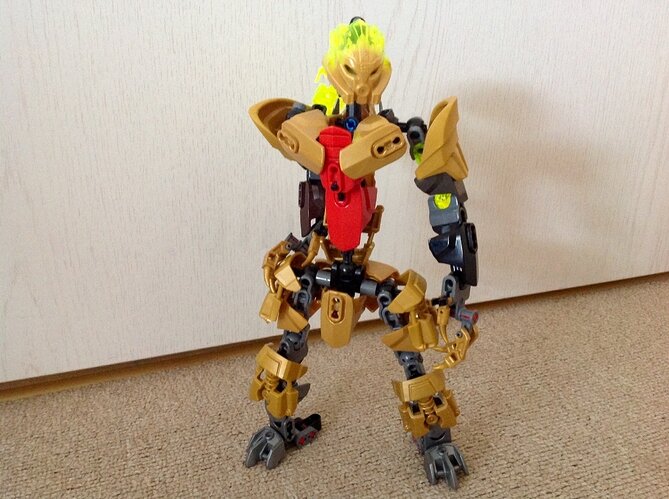 Yeah, I think the final version looks a bit better than the first time I built her. Too much gold and her hips were too wide for my liking. So I am happy that I went back and did a bit of retooling.

Side view: So I tried to fill her up the best I could not leaving too many gaps though you can’t see it that much she is not holo.
Also, I added those heel spurs for the sake of balance I would hate having her fall backward because of those tiny protector feet and I did not want to give her hero factory feet. 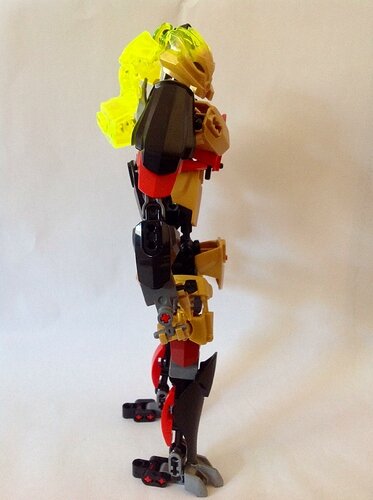 Back view: My intention was not to oversexualize her but I did want to give her the iconic female traits besides that her back is filled up pretty good in my opinion.
The torso is custom it took me a while to decide what part goes where and how would it work. 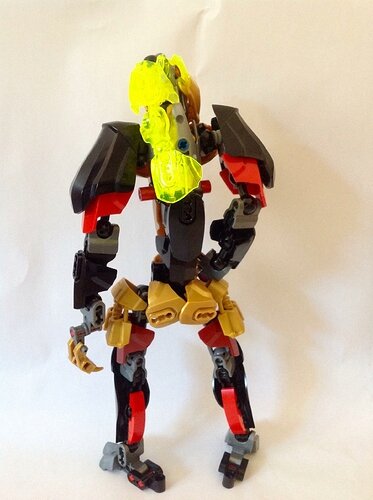 Now about her personality well she is kind, fun, outgoing when you get to know her she’ll open more up to you.
Now probably another con this moc may have it would be the red pins and blue half pin half axel well that is very common in almost any moc.
If we really want to blame somebody blame Lego for not giving us more black axels and half pin and half axel. 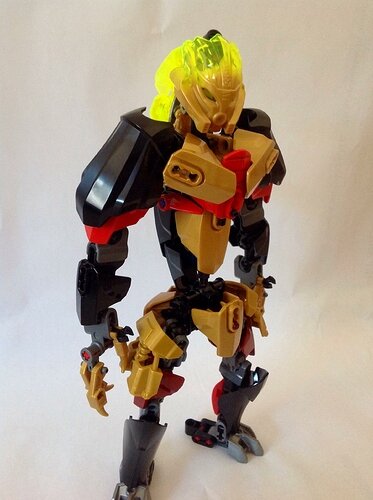 Now don’t let her kindness fool you when you messed up with her, she leaves quite the mark. 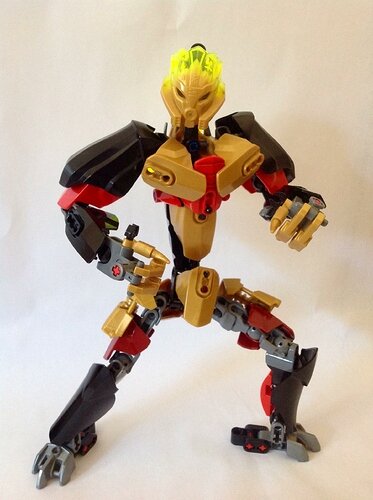 Perhaps another con might be the lack of neon yellow overall her body. Well if I had more neon pieces I would have done that but keep in mind they only come in size 2 and size 7-8 I don’t really remember but they are big armor pieces, so yeah not that great for mocing for smaller characters such as this one.

I like the idea to think about her hair to be electric hens her spear being a mjölnir inspired weapon. 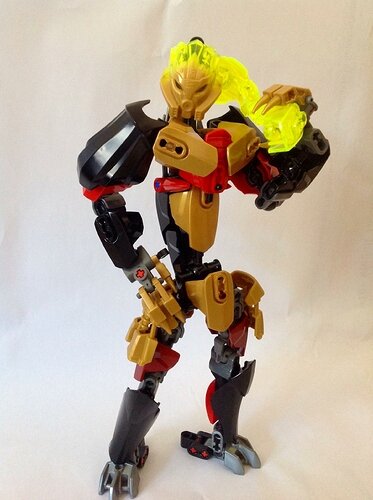 Here is her whip not the best whip ever but I did my best. 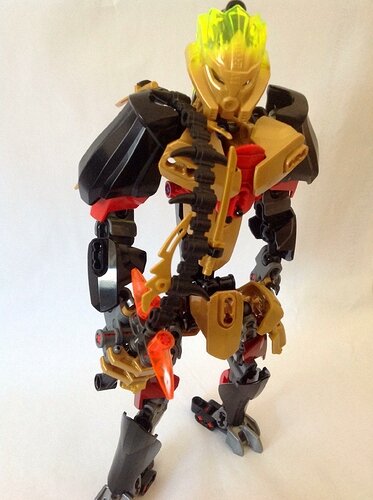 Here is her spear, simple but affective. 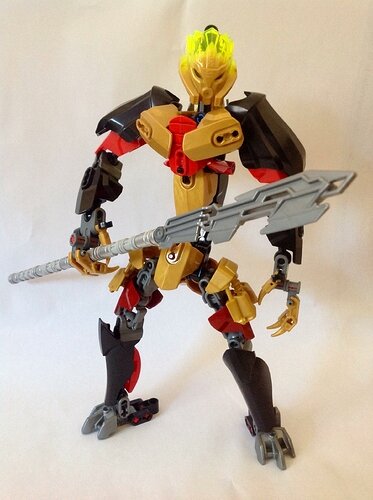 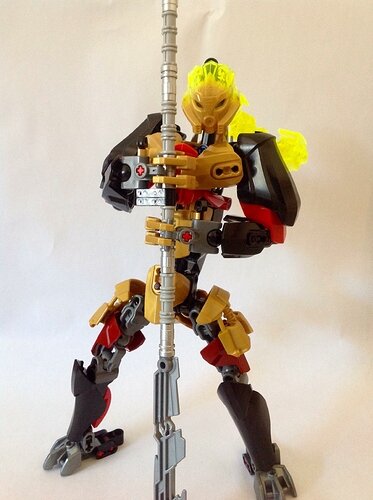 And here is her scythe which collects souls when she wants. Though she never did that 'cause she ain’t that cold-hearted she could do it but she doesn’t want that. 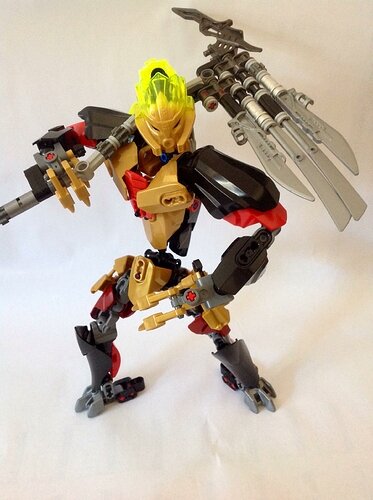 Fun Fact: The Spear and Whip are the weapons you get when you play Darksiders 3 so that stuck with this moc but nonetheless this moc is original with now some minor inspiration from Fury.

Also, the Scythe was a why not-add it-the last minute kind of deal it was supposed to be originally Death’s Scythe but since I scrapped the idea Shadya got it. 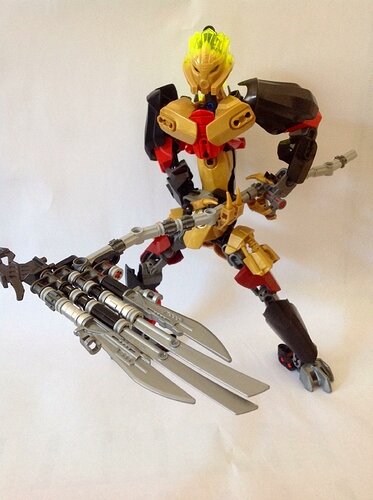 And so our lovely time traveling Shadya from Ancient Egypt says her goodbyes. 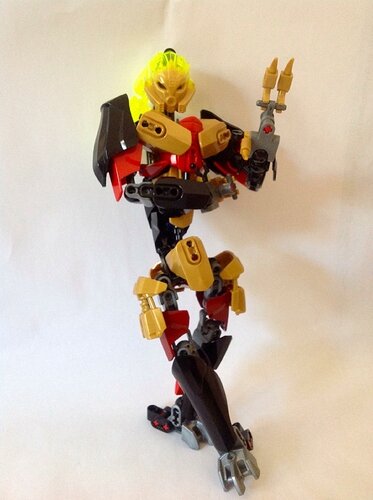 Final thoughts and explanations: So yes the moc is very posable and sturdy she is not clumsy or anything I tried to build her solidly and I think I did a decent job at it.
Could I have done it better? Well yes I could but I lacked the imagination and parts, only time will tell when I might get a new idea of her new design to make her even more female-ish.
This time no theme songs if you want for me to post her theme song, sure I’ll do it but if not it’s okay it is useless really because the music doesn’t make the moc better or anything.

Okay well hope you enjoyed, good constructive criticism is appreciated and your thoughts about this moc and if I did a good job it’s as well appreciated.

The torso is too thin, it could have more red, but it looks really good overall.

So she is basically an op time traveling god? Gotcha…

No she is not a god.

Oh I know, but the way you frame her makes her seem like one

Well I am sorry for not making it clearer.

Looks good, except for crotch plate which sticks out a little to far.

Yeah I actually thought of that myself but how could I make it better?

Perhaps try using a rahkshi head if you have any

I sadly do not have any G1 Bionicle parts everything I have is G2 Bionicle stuff and other technik and system parts I’ve gained these pass few years.

Well any mask that fits the color scheme would do as long as it’s not to large.

Well the question is how would it be attached? Since the G2 Mask have different connections than the G1 Masks.

This is great! The proportions are reasonable while still clearly feminine. The build is very well done. The ponytail was a nicely exacuted detail. And the weapon builds are absolutely magnificent.

You know, now that I think about it, she could use either a bit more or less trans neon yellow

Well there is less trans neon yellow. That’s her hair and all with I thought worked well with Pohatu’s 2016 Gold Mask.

he looks simple but really great ! but where are the soulders armors from ? I don’t remember them

The shoulder pieces are from Darth Maul.