Shika no ōkami (Wolf of Deer) is my own Mythical creature not like the wolfdeer or deerwolf this one is more human in nature and mind, I set out to putting it into my Mythron story as well as having a whole background story to its race. The gold one its head and antlers show its royalty well being a queen: Big antlers female queens, medium antlers Kings and princesses and princes small antlers guards, knights, no antlers villagers. honour guards have big antlers but with 2 stems instead of 4 like the queens.

This queen is called Antlzar she is the 50th queen of the Shika no ōkami republic living in the deep forests of Mythron the Shika no ōkami are a proud and honourable race they don’t fight with out reason and do not go berserk when in battle, they’ll only fight if they have too but they are a peaceful race. 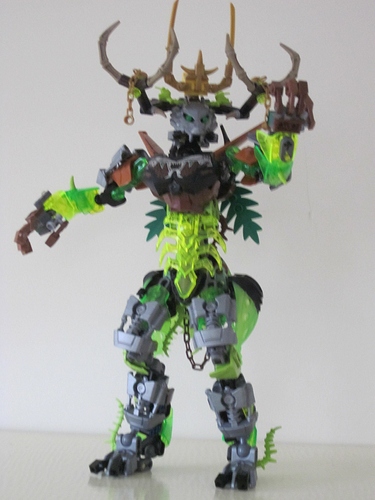 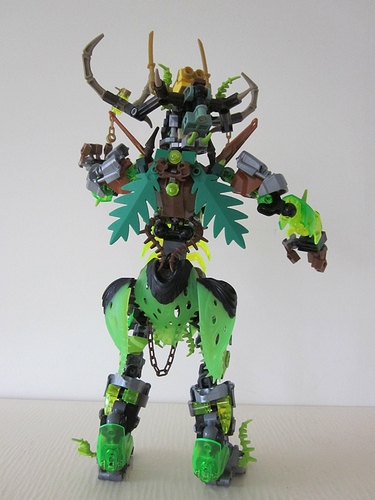 Looks like it would be right at home in the forest…

Reminds me of a Windigo. Groovy.

Looks good for the most part. But there is jus something off about it’s waist area.

It looks pretty good, but I don’t get the use of the hero factory things on her butt,

think of moss covering the bark of trees

The MOC itself looks really cool, but I feel like there is too many types of green on it.

The build’s pretty good, there’s just too many colors on it.

read the description don’t just skip to the pictures

Still too many colors. They clash a lot.

having a forest look makes it clash brown shades and green shades, wait for the drawing of it

Pretty cool. While they are minute, the exposed ball-joints on the back bug me.

While I get it is meant to look like part of a forest with all the greens and textures I still think it clashes a lot. I get that in drswing it could look good I don’t doubt that but here it looks messy.

Unlike everybody else, I’m a big fan of all the colours…
Further proving the universal law about me liking stuff people don’t like.

Its an interesting design, but looks a little too over-done in places. Compare the arms with the legs for example and it seems the legs have more to them - can understand why, but its just the vibe i get. The colours are a bit much also, forest colours do work here, however i feel using a bunch of darker shades would have had a better effect.

This thing is really awesome looking!