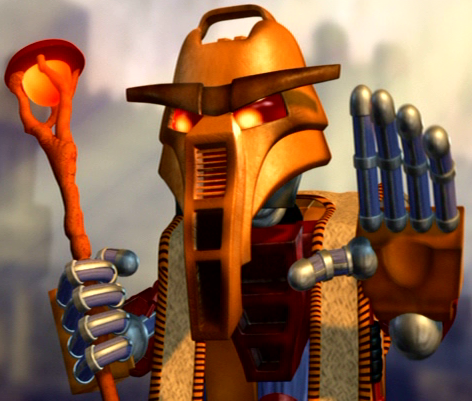 Part 1
This is the story of my visions, this is a story of reality... I turaga Vakama am going to relate to you chronicler how I came to understand life. My visions are what makes me different, they make me aware. I, for the longest of time didn't understand what they meant, Why I got them and how I got them.

I later decided to take a day to meditate on the three virtues which is what gives all matoran purpose and meaning. Unity, Duty, Destiny... I thought about them for a long time and it came to my attention that when I stared into the fire I saw another vision.

Makuta! He took over Mata Nui, there was no light to follow except for the light of hope which came in a form of a toa. This toa was more radiant than the suns and more pleasant than ten moons! He told me destiny is the only virtue that is undetermined my an individual. Then Makuta squashed him like a bug and told me that destiny was nothing... It was a pointless void of hope for the insignificant.

He then swallowed me up and I saw the heart of makuta. He was trapped in his own shadow! I then approached his heart and it did not beat, nor could I hear a beat. He was dead! He had been dead and is dead.

Then he spat me out and then Nokama came and asked me to visit Ga-Koro because of the quarrel between Tahu and Gali. Then it came to my understanding Unity.

Then came another vision, but this time I saw the glory of my old toa self and my team. Then I saw Lhi, and he said, "You must be united, only then can you defeat the evil that is to come!" Then out of nowhere I saw an eruption that flowed over metru nui and destroyed the cities. The lava was black and its sounded like roaring lions. Then shadow filled the land. Again I was disrupted by Nokama and I told her that I needed to get rest and she permitted me to do so. So I walked back to Ta-Koro and I saw the captian of the guard Jala, and when I did I saw his Hau speak... It said to follow the light. This is what Lhi had said to me long ago. So I decided to do just that. I went to the highest peak I could find anywhere in Mata Nui!

I traveled to Ko-Wahi. And then a storm hit and knocked me into a hole in the ground and I had then been surrounded by darkness. I then saw a little light and I drew near to it and It was a light stone. I had looked into it and it was engraved and on it said "Tomorrow is seen in future's past!" I understood then why I was given visions, I was gifted to see that there is hope that I could renew the hearts of the Matorans...

Part 2
...But a shadow had fallen upon me when I realized the truth. There was a greater evil than even Makuta...Yes, he brought back my attention of a time when I had betrayed the matoran and was led by the beast inside me. I couldn't shake off the memories as he had me re-live them in a vision. Instead of shaking it off I had to learn how to accept the truth by embracing it and looking toward a better future.

Then the great beast slithered out of the shadows and then he became a mighty titian and he tried to prevent me from going further. Then something happened, a mighty earthquake brought down the mighty titian and Mata Nui protected me while the rocks fell and then he revealed an exit through the tunnels. The tunnels led me straight to Le-Koro. But when I got there I was given a sense of peace.

Then out of nowhere a gukko bird had took me off my feet and led me higher than the tallest of trees. He took me to the heavens where I saw all of the Island of Mata Nui. Then the Gukko let me off at Kini-Nui and then when I was to travel back home to Ta-Koro.

I had then seen another vision. I saw a mighty mountain, which there stood there two brothers. They both had one destiny, to unite the matoran and to protect them. Then out of nowhere a great shadow fell upon them and out of the sky came the Kraahkan. The mask then befallen on the the wise protector of the matoran and it had poisoned his mind so that he had then taken it upon himself that he was destined for more and he tried to rewrite history. He had then enslaved all and locked his brother into a prison of shadow, where he had been trapped in his own mind. Then an elder told me not to share what he would then reveal to me. Coming out of my vision I had arrived back in Ta-Koro.