We had a total of 6 canonized fan-stories, which were:

No One Gets Left Behind by Shadow-Nui

All of them to flesh out the world of Bionicle even further.
Greg hasn’t made any new stories that continue the events of 2011’s The Powers That Be and The Yesterday Quest, which looked like the beginning of something even bigger than what we saw with Makuta and his minions along the Dark Hunters. Neither any new Canon Story Contests by Lego, BZPower or anyone else. So i was wondering, would the community want more stories to be added into the lore through that way again? Even after 10 long years lacking any new tales to read?
SOMETHING I HAVE TO ADD
Not long ago i made a poll asking which is the format fans enjoy more: Comics or Books, and the results were 96 votes for Comics against 35 votes for Books. So, what i propose is making a Written portion of the new Story material and an Art portion which function is to turn the winning entry into a Comic. 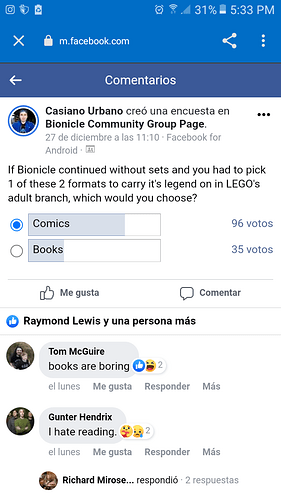 Personally I’m not in favor of it if for no other reason than to avoid the borderline civil war that the fandom nearly broke out into when the canon design contests began.

At this point, I’ve just gone with my own story, and new stories for me could be best used to flush out stuff we already know. I don’t need more characters, locations, and objects with one paragraph of lore.

Now between comics and books, I vote books, since they usually have a lot more information given.

For starters, I’m always down for having more official Bionicle story, whether it comes from a contest or elsewhere.

I’m open to having story contests to flesh out the universe, but fan-made continuations of the 2010-era story are borderline impossible at this point. As much as I, personally, would like that, I’m not sure if it’s realistic, mostly due to the massive amount of story that was being set up; we couldn’t just wrap it all up with a couple of short stories. Any continuation would work best coming from a single creative team, and that’s not going to work with a contest format.

What could work, though, is self-contained short stories set in the various other lands in the Matoran Universe and Spherus Magna, similar to the existing fan-made stories. In that vein, there could be short stories based around known events, such as the Matoran Civil War or the Core War.

The other issue, though, is how the winner would be chosen; I don’t think it’s realistic to expect the average fan to read dozens of short stories and compare them. This would have to be a judged contest, but there aren’t any obvious choices for a judge besides Greg, and that has its own issues.

EDIT: Maybe we could get a story recounting Tahu and Onua’s team’s mission to destroy the Energized Protodermis pool on Daxia; it was set up in Reign Of Shadows, and was confirmed in a Greg Quote to have been successful, but we never got to see it.

I actually like the fact that Bionicle’s story lefts place for imagination, much like the concept behind LEGO, you can have the official stuff but with creativity you can build new stuff out of it. Many people here have been continuing the serials stories with their own ideas, I even have a headcanon continuation that involves Okoto and time travel, don’t take it away from me.

Maybe we could get a story recounting Tahu and Onua’s team’s mission to destroy the Energized Protodermis pool on Daxia; it was set up in Reign Of Shadows, and was confirmed in a Greg Quote to have been successful, but we never got to see it.

I would like to see that, along written individual stories about the Core War, the Matoran Civil War, the Mission for Jovan’s team to save the Universe, the life of Kabrua on Bota Magna after The Shattering, the Beginning and Ending of the Toa Cordak, the lives of Orde, Chiara and Zaria before meeting to search the Great Beings on a restored Spherus Magna, etc.

At this point it is hard to see such a thing happening but if so I think smaller less plot relevant stories would be best, so staying far away from 2010 etc.

I have thought about it before, how cool it would be to do a weapon/tool contest again or Rahi or Locations.

I would be in favor, but were it to happen I would prioritize finally canonizing the Memoirs of the dead and Thousand years untold 2, before making anything more.

Should story contests return at this point? Well, to quote Sirkeksalot:

I think that story contests would be a good idea but would require ALOT of rules and regulations. Despite being a fan since 2008 I only got involved in the community when G2 was ending and having a chance for one of my stories being canonized has been a long time dream of mine.

Will they? Likely not.

Should they? Oh yeah. I actually really like the idea of creating them in comic form, too, like having a script potion followed by an art portion. Obviously, these would have to be limited to characters with canon appearances.

As for the mindset that people won’t be willing to read through a ton of written entries for voting, I counter that a) there will likely be fewer entries than the MOC contests anyway, and b), these are Bionicle fans we’re talking about. If anyone would be willing to do it, it would be us. Now, even if we did this, Greg would likely still have to read and continue the final results, and since he hasn’t even done this for the unfinished contests yet, that seems unlikely.

however, as long as the contest are run with thorough canon checks, we could have them be approved mostly for writing skill and intrigue alone, and could therefore have them be canonized by Christian Faber, or Bob Thomson (if anyone can get ahold of him), or someone else Bionicle adjacent.

could therefore have them be canonized by Christian Faber, or Bob Thomson (if anyone can get ahold of him), or someone else Bionicle adjacent.

This gets a little tricky. Even if we could get Faber to agree to canonize new content (which honestly isn’t unrealistic), he doesn’t work at Lego; unlike Greg, he hasn’t been given the authourity to approve Bionicle content.

Now, if the community could somehow agree to accept Faber’s approval at the same level as Greg’s, then that new content could effectively be canon, but that’s a whole new battle without the objective backing from Lego that Greg has.

For Greg to canonize something like models in these contests, has to get in touch with the company?

has to get in touch with the company?

Story contests are a bad idea, IMO. They’re much more likely to break canon than MOC contests - see Norik having his spear and shield pre-Hagah in NOGLB, as a chief example.

I absolutely agree.
To me, the Bionicle story is more like mythology in that its story is told in broad strokes, and is readily able to be reinterpreted, revamped, reimagined, etc. Saying that Greg’s opinions or comics are more canon than MNOG or other variations of the story/lore is silly in my opinion. Bionicle is a multiverse. We all grew up playing with these toys, and we all had our own interpretations of the storyline and lore. People getting obsessed with establishing ‘canon’ just risks ruining the whole thing. It’s a multiverse, anything and everything is canon.

If canon comic contests were to be attempted, I think adding canon art to the existing script for Ignition 12.5 would be a good way to test the waters, as it wouldn’t really require any additions to canon, but would add visuals to story we know happened (so basically what the contests already do).

I’m very pro-new-stories, but even if we can’t get support for that, we could, say, have comic adaptation contests for parts of the story that didn’t get any, like a “Many Deaths of Toa Tuyet” comic contests after we have depictions of her and Nidhiki.

I’m very pro-new-stories, but even if we can’t get support for that, we could, say, have comic adaptation contests for parts of the story that didn’t get any, like a “Many Deaths of Toa Tuyet” comic contests after we have depictions of her and Nidhiki.

I agree, that could work. Specially that scene of the Toa Nuva fighting the Piraka at Voya Nui. Or the Matoran of Metru Nui looking to escape Karzahni’s domain through Toa canisters from the original builder.