So as you guys remember there was a character that I named in MM Tekan’s description. I later made her which was partially planned and also because I had to put her up.
(Better pics later) 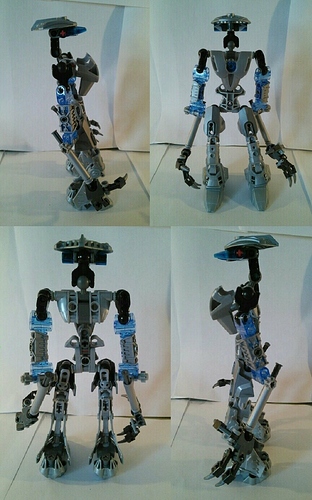 I bet so many people saw her design and that she was an alien and went “he made a bionicle gray.”

Silver Aquapphire (pronounced Aqua-fur) is one of the alien species that made Tekan’s brethren and the one that personally experimented on and partially designed Tekan. She crash landed in an escape pod a couple days after Tekan. She also does fully know how they got there, she said the ship they was attacked and she set Tekan to fly to a random location and set the escape pod to follow.
Her species is a very science oriented one, children are made in test tubes, to decrease growth time, by taking the genetic material of two others that appear compatible, they can be 3 colours, copper, silver or gold, from most common to rarer.
Coppers tend to end up as workers, silvers as scientists and golds as leaders and such, of course it can happen that a copper is an amazing scientist or a gold is a worker, this is just what they tend to be.
She is a blue-eye, one of the rarer types and more disliked, due to a genetic anomaly in blue eyes they are more erratic and emotional then others who have little emotions, making them tend to only be workers, Silver was a worker for quite a while until an accident happened, irreparably damaging her arms below her shoulders, she was due to be terminated until she managed to design replacement arms and get them built, after that it was discovered she was a genius, albeit an eccentric one, and she was moved into the scientist class where she ended up working on the cyborgs and eventually Tekan.

Personality: She is shy at first until she gets used to you and has a tendency to be around Tekan, when no shy she is very eccentric, kinda sassy, bit of a joker, bonds fastest when building with someone, doesn’t fully understand personal space and tends to drag people where she wants them to go, happy all the time.

Only one that can stop Tekan early when he’s in rage mode.

She specializes in weapon building (and yes mech’s count as weapons.)

Can replace her hands with other parts, bonds with others the fastest if they’re building with her, mild fear of heights, can go up high but tends to cling to the nearest person or stable object if no one else is around, unless she’s in a mech, where she becomes fearless, even if it crashes. 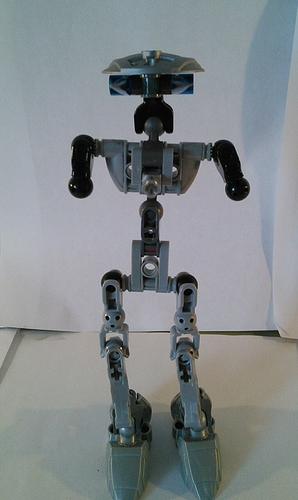 Yes I count the prosthetic arms as armour.
I didn’t have one of the bottom pieces in a gray color so I custom made one. 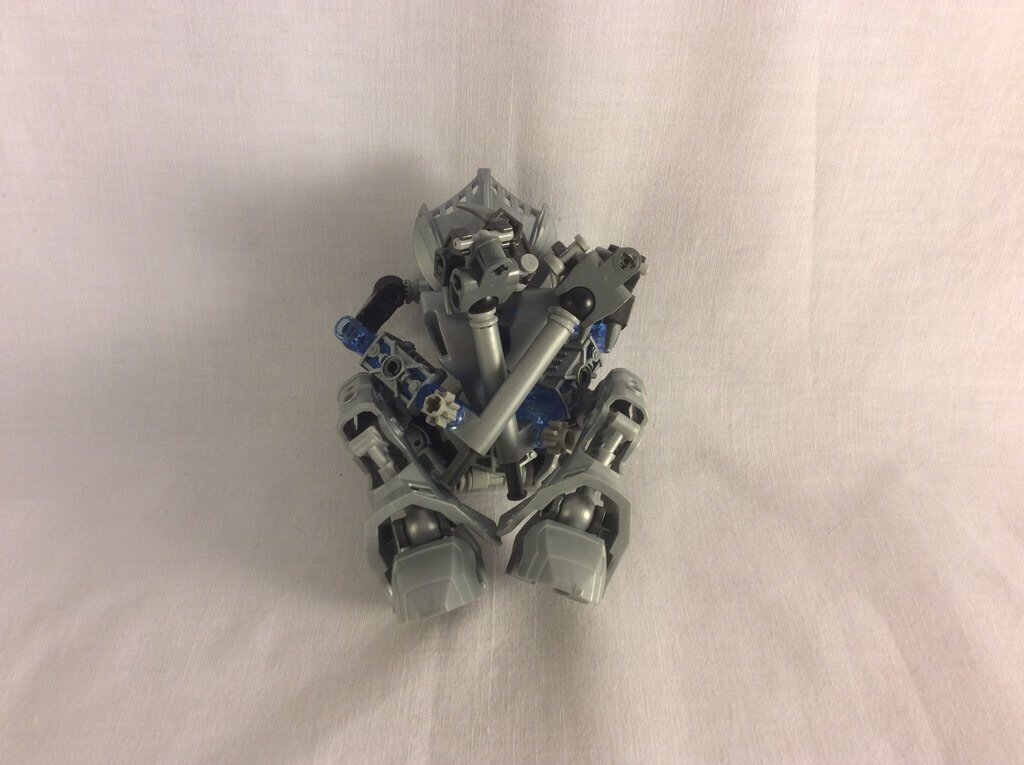 As I said before Silver is actually quite shy and such at first before she gets used to you, if she gets flustered/nervous enough she will actually go into a type of turtle mode.
(which I discovered on accident while messing with her head and noticing that I could maneuver her head in such a way that it kinda fit in the gap in between her chest plate and body.) 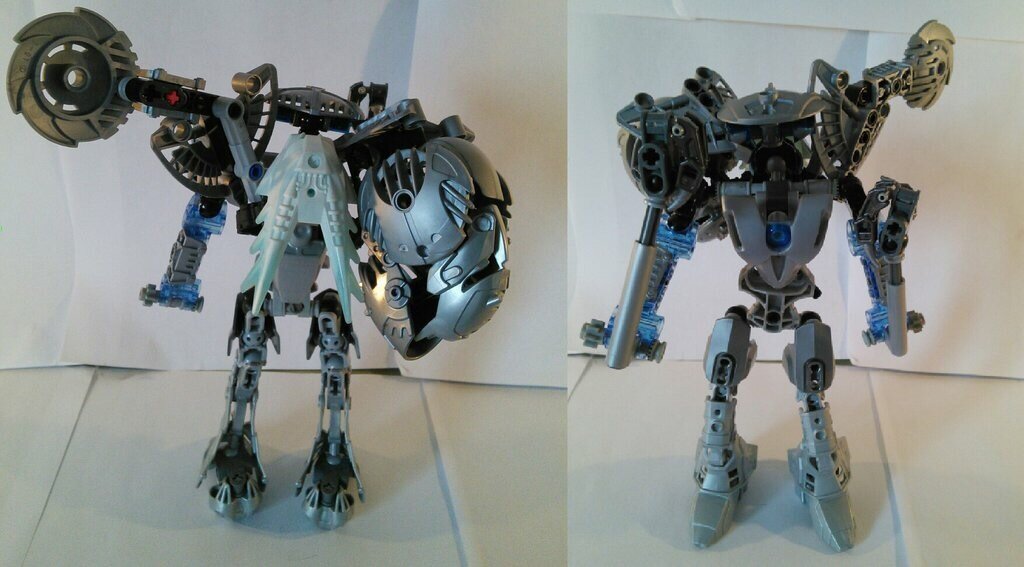 Yep she has a toolpack/jetpack combo with items. The Jetpack is more along the lines of a space oriented one so it can allow her to slow falls and have a mild jump boost but that requires more energy and can only be healed for about a minute until the energy runs out and it needs to auto recharge. 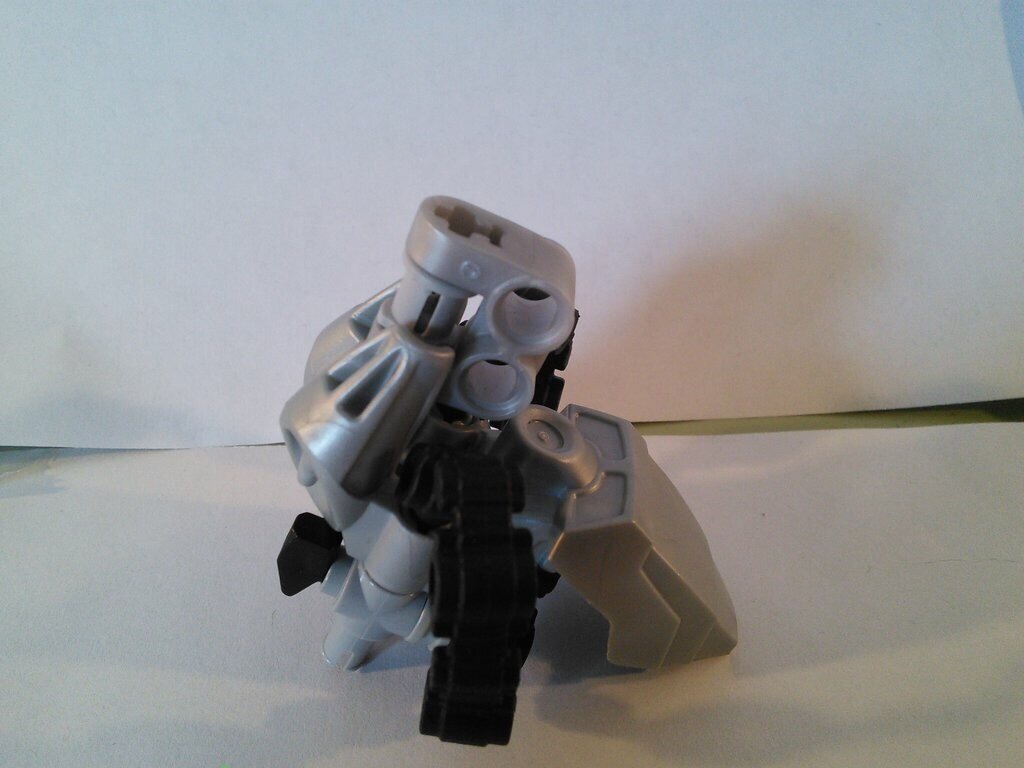 How to’s and related

Yep she has a saw arm replacement, for when she needs to cut.

Yeah It looks like a parrot head, funny eh? 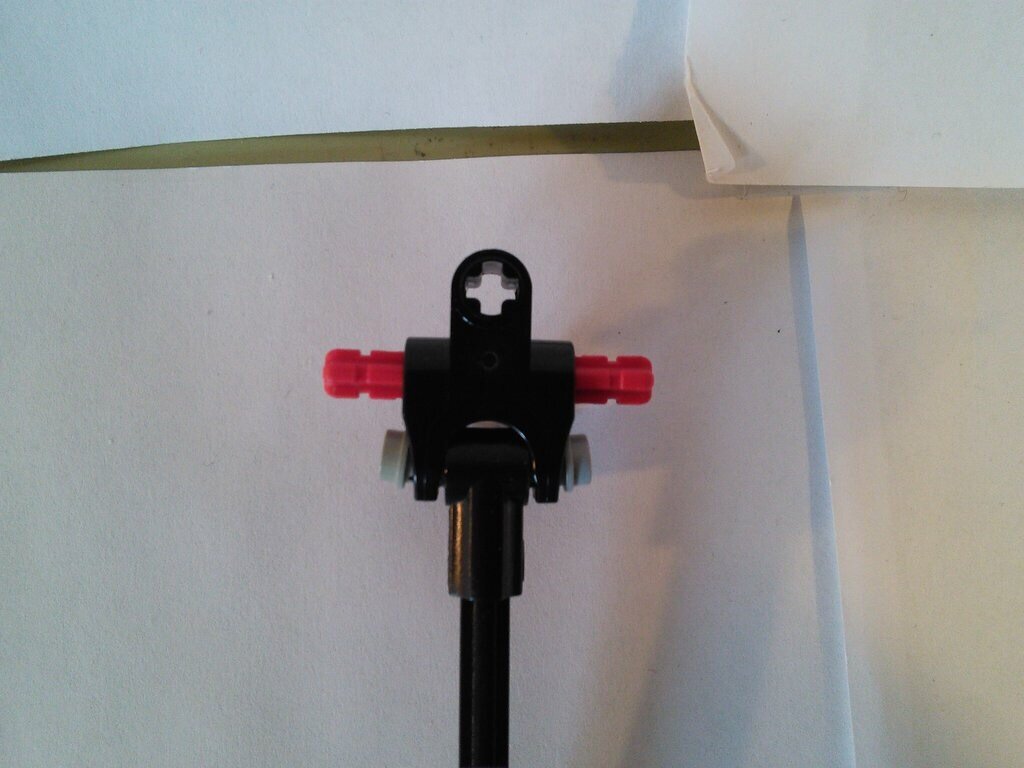 Little closeup of how the handle sticks to the hammer. 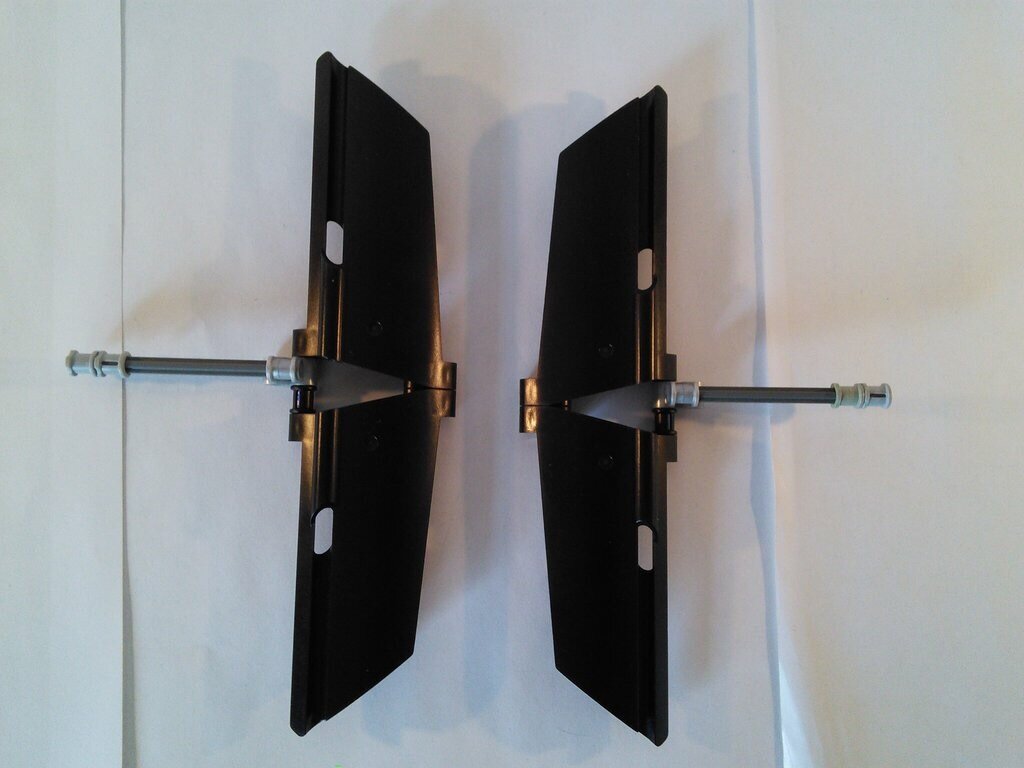 Little thing I made for no reason, don’t worry ToaLittleBoehn This isn’t something that is necessary for when she’s made, just did it for fun.

Mech
Yep she built one, unfortunately it suffered a catastrophic crash later on (I.e. I needed parts.) 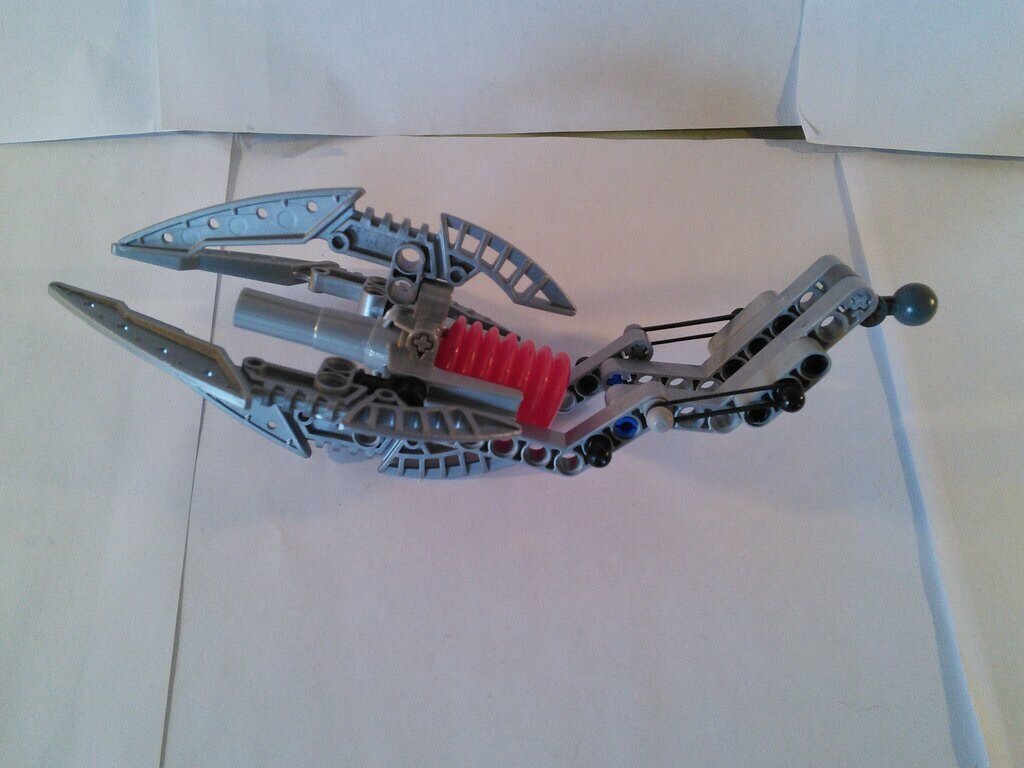 So I let Silver have some fun with my parts and she made this, it’s pretty cool, there’s even different positions it can be put in by moving the elastic bands.
Think its like a laser cannon arm.

OH GOD WHY?!
Left Silver alone after she made the arm because I was busy and came back to her terrorizing the others with this, it goes up to my knee! so it’s like a quarter of 6 feet tall, mainly built for her to sit in, also how I discovered how she loses all fear while in a mech.
Kinda top heavy but it can stand and move kinda. 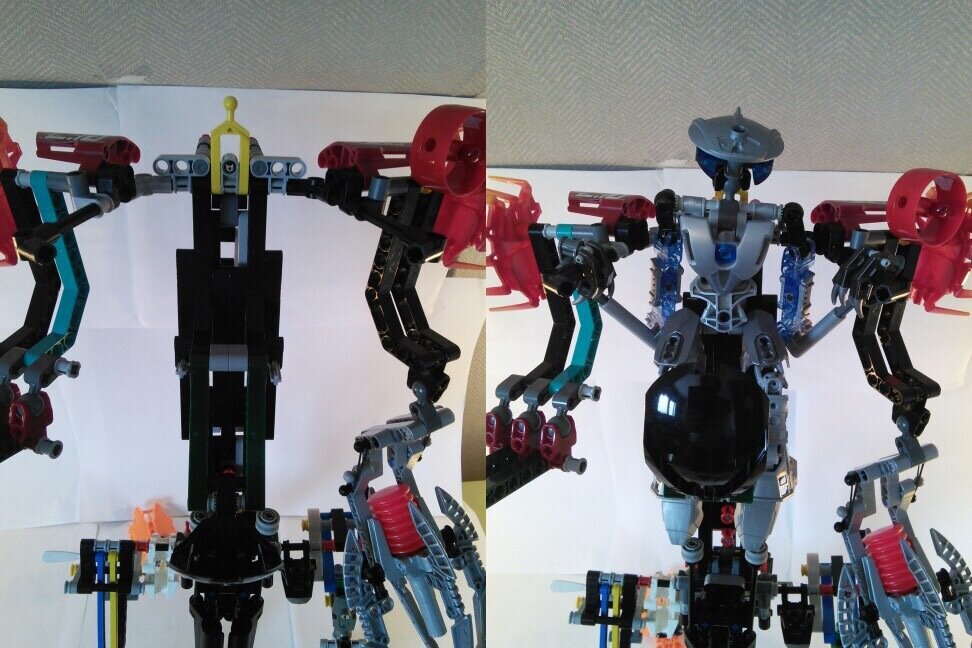 If you want to see the entry contest and such check out Kelratz.

what the heck even is that mechsuit

@HewksDKowlihad I have absolutely no idea whatsoever! Got inspired from one of the comics from ToaLittleBoehn and had to make my own, which came out really crappy like, amazingly enough it could actually stand and kinda move.