As you can see, this is not a self MOC, but rather my concept art for my character in the Bionicle world.

I have a double-ended-sword-staff that can be slit into two swords. (which I sometimes wear on my back) I also have a shield that looks like my Faith Charm.

My shield can hover on my back and allows me to fly.

I got the hover disk idea from the show Wakfu.

Here’s a fight scene to show how the hover disk works.
https://www.youtube.com/watch?v=HISOLeyDOuU

For my armor, I have breastplate that looks like a Tahtorak’s head. I’m not sure what the rest of my armor looks like, but I like the style of Transformers: Beast wars.

And me without armor: (rough sketch) 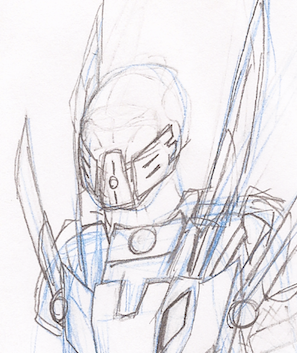 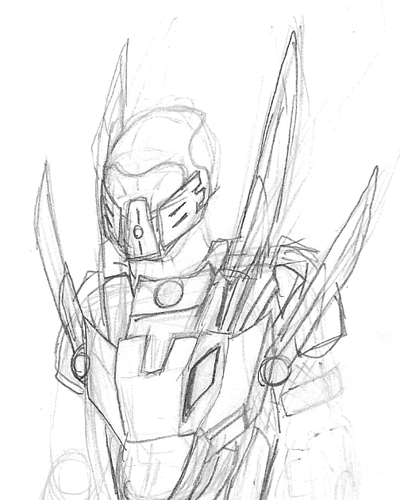 Great artwork. I think you have a solid concept for a Self-MOC.

This is fantastic looking. The Tahtorak chest idea is really awesome.

That blue tho, was this scanned? Cause that goes away when you scan right

Yes, the blue goes away if you scan it in under the black and white setting. (or becomes so faint that you don’t notice it) But I wanted to keep the blue so I scanned it with full color.

Looks good! So when are you planning on lego-ifying?

Any thoughts on what mask you want to use?

I like to wear the vahi or the kakama. (which are rather similar) I’ll probably use the modified vahi below with a visor until the completed vahi comes. 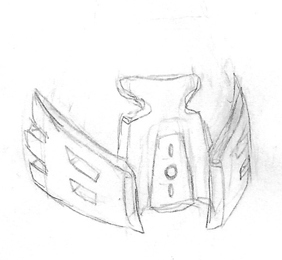 I also have a slight dilemma on the mask, because I’ve used this concepts to developed a second character that doesn’t have a mask. Instead he has the Faith Charm as his head which hovers above his torso. His head isn’t connected to his body, so there are various comic events that can happen. I’m planning to make a comic for him. My dilemma is how to balance the two… 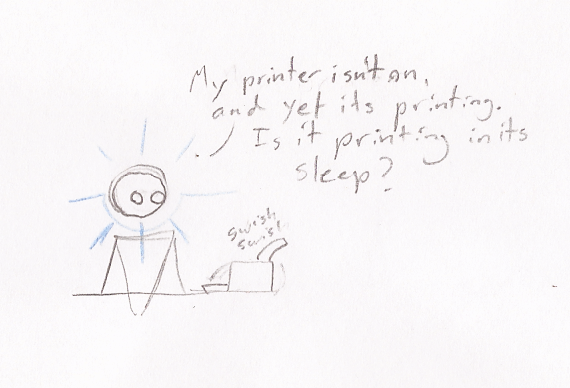 Practicality-wise, wouldn’t that armour cut your head off if you were turning too far left/right, or if you hit an immovable object like a rock or wall or something at an unfortunate angle? It looks like something that could be easily exploited in a combat situation.

@ProvokingPerch Yes I see what you mean. I usually keep the spikes so that the Tahtorak can be more recognizable. As to the spikes themselves, they would actually be in a different position than is shown in this picture. I completely got rid of the middle spike. (to avoid cutting my own throat) The top spikes would be shifted back so that they emerge from the top back and act as wings. The lower spikes protrude under the armpits.

Although I have thought about turning the spikes into sheaved sword, I discarded this idea because they would be uncomfortable to draw. The spikes wouldn’t be blades, and would retract when not in use. I would use these spikes mainly for flying. When just for show, the spikes would be holograms.

Update: I added a mask.

Nice. Is that a full-face mask to protect the fragile eyes against the seemingly blinding light emitted from that energy weaponry? I can kinda see a faint outline. Also the repositioning of those blades seems less exploitable, in the sense that if an enemy were to attempt an aerial assault, they would end up somewhat impaled.

Is that a full-face mask to protect the fragile eyes against the seemingly blinding light emitted from that energy weaponry?

That is just me drawing ideas and then erasing them. Ever since I saw a fleeting image of the Vahi back in 2001-ish I’ve been fascinated with it. But the one problem with the Vahi is it doesn’t cover the whole face. Over the last decade or so, I’ve failed to come with my version of the completed Vahi. The faint lines you see are yet another attempt, but I still wasn’t satisfied. (the lines it make it kinda resemble Toa Vakama’s mask) 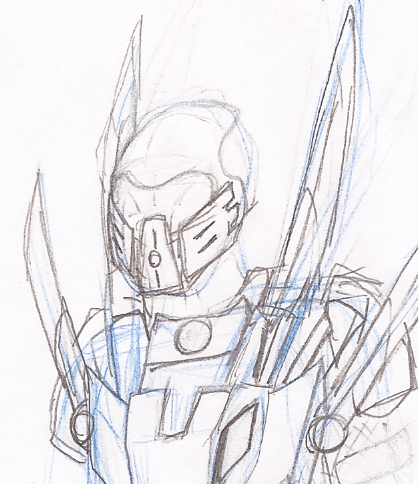 Yes, it’s suppose to be a full-faced mask. I generally wear a visor under the incomplete Vahi; like Pohatu Phankota has. Now I wait for the day when a completed Vahi will either appear in the Bionicle world, or I invent one to my own satisfaction. (I would still wear a visor under the completed mask [like Lewa Pahtoka] just because I like it that way.)

In the mean time I usually wear a Kakama (my next favorite mask) which I think is fitting because it looks similar to the Vahi.

Also, the rays of light are me attempting to add the faith charm and then scraping the idea. 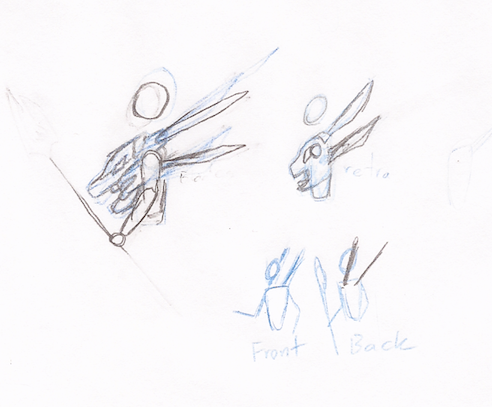 And stuff for fun… 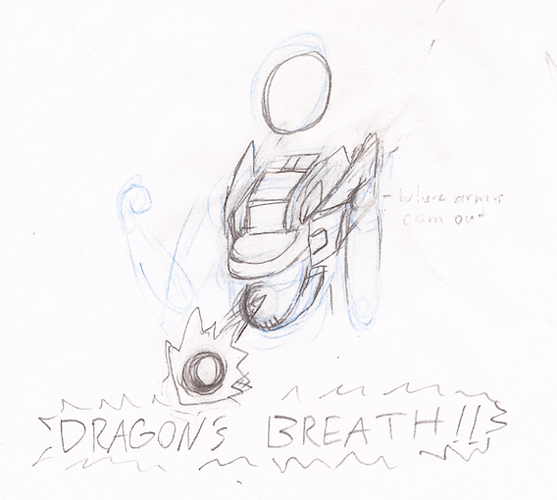 And stuff for fun…

Another idea for my character is that he can summon a dragon spirit with his shield. This dragon spirit could be solid or an energy form. 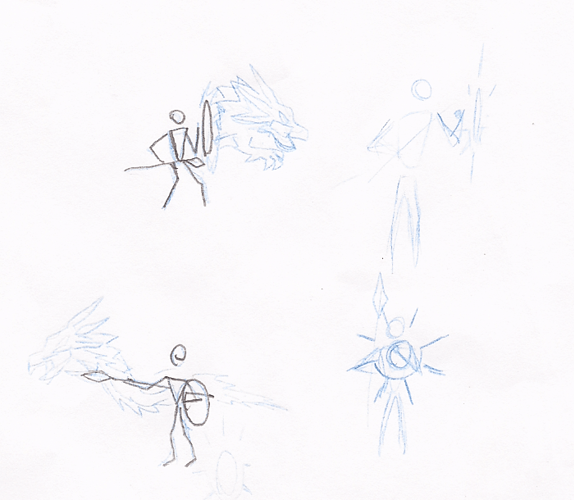 My Character could even ride it as a mount. 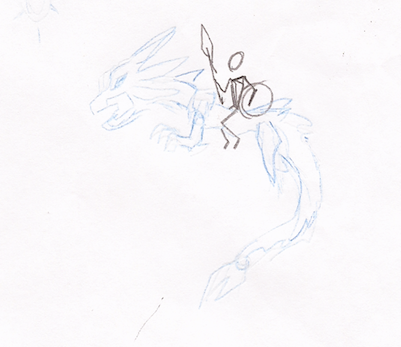 The Dragon Spirit is based the Astral Tahtorak MOC I made. The ring around the creature is suppose to represent it emerging from the shield.

One future idea with my character is that he can fuse with the dragon spirit to form a full on Tahtorak dragon (with wings and ever thing). This would be his ultimate form.

Wearing my secondary mask (the Kakama): 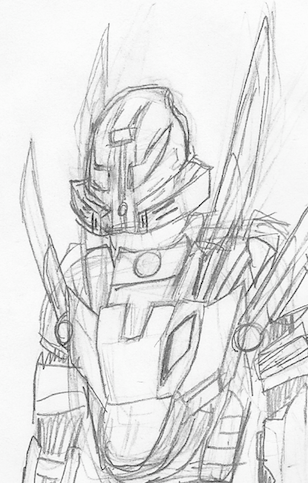 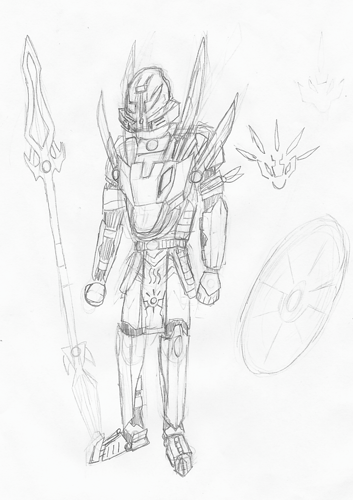 Alright, you’re definately taking this pretty seriously. But, and I’m not trolling, how come you’re not made of bionicle pieces? If you’re in the bionicle world. Is it some kinda alternate universe where all the bionicles are all humans or something?