Which group would I pick, as a neutral?

Depends on where they are located.

Who put out the initial bounty, the Imperials right? Then which group is which?

Yeah. If she is gonna take this bounty hunt, she may be with the Imperials.

Which one is the Imperials?

(As Adam) “We are sending you all into this city to find the Jedi scum. The one who brings him gets paid, I don’t care what happens to any of you. Group one may now board the transport“

I’m doing the boarding group numbers as just waves of players. Like this initial wave is group one, and if more join I’ll make more groups.

EDIT: Though Ygdras and other later characters will be in later groups due to this transport being about to take off

Poor Juliana. The one lone contractor among a bunch of Inquisitors with squadrons of troops. This is NOT going to go her way I feel.

@EmperorDuckie is it too late for me to throw in another character?

Go right ahead! I designed this one so we could have more late entries 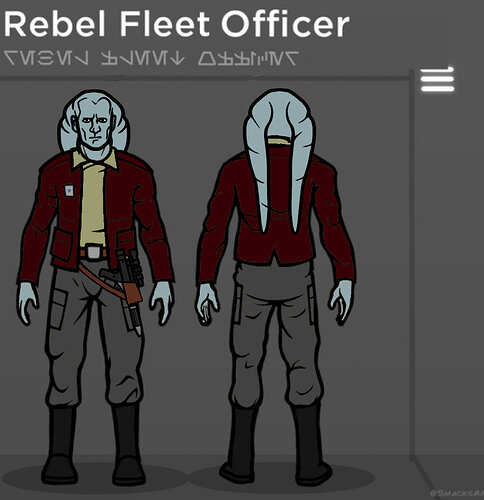 The Twi-Lek rebel leader. He’s probably not going to appear much. We’ll call him Iont Dumoch

Name: Brorden Skordann
Gender: Male
Faction: self/bounty hunter (empire for now)
Species: Human
Weapons/Tools: DC-17 Hand Blaster, E-5 Blaster Rifle, A re-programmed buzz droid named Cooper, (Coop for short). He also carries some rope and a vibro knife.
Abilities/Capabilities: Brorden may not be the brightest bolt in the blaster, but he’s a decent amateur bounty hunter. He also prides himself on his knowledge of all things Clone Wars related (he’s a nerd when it comes to it).
Appearance: He’s a man of a larger build than most. He wears a dark brown aviator jacket over a refurbished ARF trooper chest plate, as well as an ARF trooper helmet with a custom 501st point job. He has short cut messy brown hair.
Personality/Bio: Brorden may be a little clumsy, and even a little slow, but is overall a surprisingly hospital man for a bounty hunter. Brorden grew up during the Clone Wars, and ever since took a liking to the weapons and overall history around the conflict. He jumps from planet to planet taking on smaller jobs, saving up credits to purchase more Clone War memorabilia. Along his travels he found and reprogrammed a buzz droid who he named Cooper. Ever since, the two have continued to take jobs, with the hit on Chimm being his largest yet.

I’m just going to have him have been on the first imperial transport, hope that’s ok.

So, I’m curious, does that “force-scan” include the non-imperial characters?

Accepted, but I’ll have him on the second when Ygdras and Kay join if you’re fine with that

@ProfSrlojohn what do you mean?

That little force scan, is that just picking up force users, or everybody.

Because I can very much say that Juliana would be light aligned, just among bad company.

Ygdras is just trying to get an idea of what lies ahead so he knows if and how much of a time crunch there will be.

He won’t be able to find that exactly, but the fact that there is one

Two Inquisitors and a bunch of Purge Troopers is a good reason to make this a “Grab-and-go ASAP” mission.