I know this has already been said, but I used to think Santa and the Easter Bunny were real, but now that I’ve gotten older, it’s really easy to tell they are fake

It depends on the size of the country

I had limited knowledge of the world back when I was 4. So when I heard of Czechoslovakia on the news, I thought it was the coolest country ever just because of the name.

Here’s a wikipedia article on it

Czechoslovakia, or Czecho-Slovakia (/ˌtʃɛkoʊsloʊˈvækiə, -kə-, -slə-, -ˈvɑː-/; Czech and Slovak: Československo, Česko-Slovensko), was a sovereign state in Central Europe that existed from October 1918, when it declared its independence from the Austro-Hungarian Empire, until its peaceful dissolution into the Czech Republic and Slovakia on 1 January 1993. From 1939 to 1945, following its forced division and partial incorporation into Nazi Germany, the state did not de facto exist but its gover...

TL;DR The Czech Republic and Slovakia used to be one whole country called Czechoslovakia

I used to think human skin was made of potato scones, I have no idea why and I don’t want to know.

I used to think Cartoon Network owned the Pokémon franchise.

I don’t know why either

I used to think Eljay was friendly.

I used to think that 20 was the highest number.

When I got my Nintendo DS at age five, I got two games with it - LEGO Star Wars The Complete Saga, and Mario Vs. Donkey Kong 2: March of the Minis. I thought that if you died in the game, your character would be dead permanently and that you could never play the game again. I was playing Mario Vs DK when my Dad distracted me and I died.

I legitimately thought I could never play again, and I almost cried.

I had a nightmare about me admiring my Pokemon cards I was pathetic until I noticed some of my ultra rares were missing. I frantically flipped through the binder trying to find them, but to no avail. On the very last page, there was this Pikachu card: 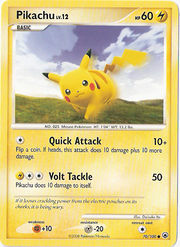 Instead of Pikachu, the card said “PikZaka” I came to the conclusion that PikZaka stole my cards, and then I woke up.

I, in all seriousness, believed that there was an evil being named PikZaka who infiltrated my dream, and that he was trying to kill me.

Every time something bad happened, I blamed PikZaka.
You lost something? PikZaka took it.
The TV won’t work? PikZaka’s fault.

It got ridiculous, needless to say.

I started telling my friends, and while most of them made fun of me, a few actually believed that he was real. We would hunt for clues at recess everyday, hoping to find PikZaka to stop him. We found a little hole in the ground, probably about half a foot deep, and immediately came to the conclusion that it was PikZaka’s den, and that if we camped out near it, we’d see him. I dragged my parents to school on a weekend just to see the den, and to try to catch a glimpse of PikZaka. my Mom would always say “Pokemon aren’t real, y’know” Which made me really angry. He wasn’t a Pokemon. He was a menace.

I told someone else about him, and he lied to me and said that he went to a museum and they had a statue of PikZaka himself, along with the legend explaining what he was, why he was here, etc. I was so relieved to hear that other people knew about PikZaka, and that others were probably trying to stop him too.

I ran into the guy who told me that a few years ago.

He doesn’t remember me.

I don’t know how long it took, but there finally came a point when I realized that there wasn’t an evil Pikachu out to get me.

I still joke about it with my parents to this day.

Somewhere, I have a distant memory of talking to a friend of mine in first grade about the “Metru Nui Archeeves”

Oh, and I thought that computer files in “the cloud” were literally stored in the air. Like, electromagnetically or something. When I was eleven, my dad told me the truth.

I have way less faith in humanity now that I know that.

I thought that if you died in the game, your character would be dead permanently and that you could never play the game again.

I thought something like this, but only on the games that had the extra lives system. I never saved my game if my number of lives was less than what I started with.

And when it rained, there goes all your files

I used to believe the Cloud was Skynet, and I was like “Nope, I ain’t storing stuff on you”

When I was little, my parents told me never to download anything online, because I could get a virus. This led me to believe that all downloads were malicious, and I wouldn’t even click on the “Downloads” tab of LEGO.com out of fear.

I used to think in Preschool that you could only have one best friend, and the rest were just regular friends