Stuck and needing some help on a MOC (Raustis Upgrade)

Alright, so my old MOC Raustis was in dire need of improvement, and for a while now I’ve been trying to give him that well deserved upgrade, now some difficulties have arisen. 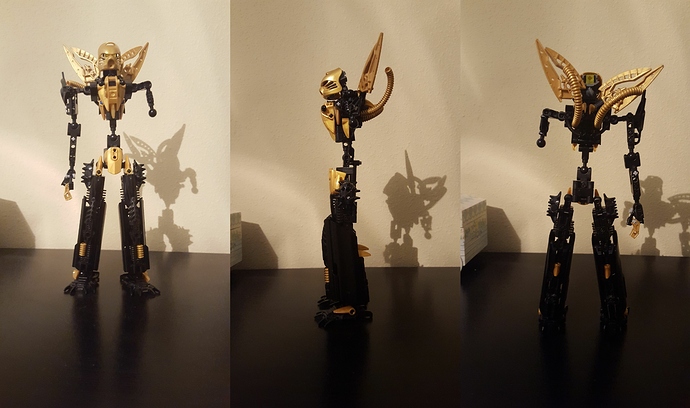 So at the moment I’ve rebuilt his legs to be entirely custom, no Inika legs as the base now, A custom hip build which is still a bit of a work in progress, and a custom torso build which I’m decently proud of. I sadly cannot fit the Brutaka mask on his back anymore otherwise it will look extremely out of place, though that is not the issue, the issue resides around some much different places.

Raustis is a MOC intended to be based more a male, and his previous form did show that, despite being really simple and unimpressive, however I feel like with this rebuild I might have made him look more feminine than like a male. This is actually kind of funny since back when I used the Inika build primarily, Raustis was a female moc named “Goldeye” (“original, I know” - He lied) so it’s humorous to me how it seems to have gone from female, to male, right to a male that looks a bit feminine.

Then there’s the arms, I have been experimenting for hours, days, and I cannot make an arm design that fits the body at all. He’s supposed to be a strong looking mineral miner, and he has a thin waist, and all the arm designs I try to give him end up scrawny with no substance and the thick ones don’t fit the torso at all.

I’m just very stuck and don’t know where to go about this, He’s been sitting on my shelf in this state for nearly a week and it’s really making me bang my head on a wall here trying to figure out what I’m to do with him. Any tips or bits of advice are welcome here, because I don’t think I will make much progress with him on my own right now.

The first thing that jumps out at me is the stomach. Not only is it incredibly thin, it just looks at tad bit too tall. For starters, I would say to lower it by one pin (as well as the lower arms). As well s that, the shoulders are very spindly. None of these would be problems in and of themselves, but because of the bulky (and very well designed!) upper torso and the solid, well covered legs, it just comes across as too thin. I’d say fill some parts in, and work on proportions just a tad.

I think this guy is definitely on the right track! Just keep it up, I’m certain he’ll turn out just fine.

THEM LEGS AND THAT CHEST THO

otherwise you’ll need to beef up them waist and arm sections. Put some rubber wheels, inverted or not on that waist(unless you want posability) and fight armor to cover them armos.

@Poaki and @JMP
Thank you very much for the suggestions from both of you, for nearly a week he’s just been sitting on my shelf incomplete and it has been bugging the heck out of me, I just didn’t know where to go with him next and it was rather annoying. I’ve taken a few things from what you both have said, work on the waist, and thicken up the arms and shoulders so they all match the legs more. Here’s a bit of a preview of what I’ve got so far from a front view. 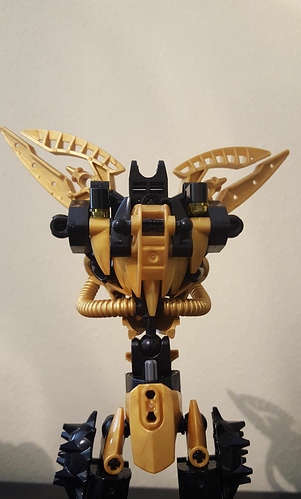 I’ve thickened up his torso so far and I’m going to be working on the arms next, I even reincorporated the Brutaka mask on the back to add the needed bulk back, hopefully later today I will have him finished up and put a new post of him on here with his improved form. I won’t really be putting up any other pictures on this post however, otherwise this would turn into a W.I.P. post I think, and it was originally a help request. Though please let me know if it looks better or not, always looking forward to input from others.

Still abit too thin but ok

I’ll continue working on it, It’s not entirely done yet, though it definitely is not as thin as it was before.

Much better! I love the added detail the tubes give, the torso isn’t too tall or too short, and the shoulders are great. As @JMP said, it’s still a bit thin, but it’s barely a problem now.

I really love how this is shaping up, can’t wait for the completed product.

I’m definitely happy with the look and shape, I am still working on the hips and part of the waist however. Sadly I cannot find an aesthetically appealing way to thicken the waist with this design. Seamless waist joints are not my specialty so I might have to leave it at this, though it’s definitely improved I’d hope. All that is left is the arms and hips, then an upgrade to his tool will be the finishing touch.

I do thank you and JMP for giving some advice on what to focus on improving, I was stuck in a builder’s block for way too long with him and those bits of advice helped a lot with getting progress made on him.

Not a problem! I understand how frustrating builder’s block is, and I’m always happy to help out where I can.