This moc was created by my friend wingblast2 (deviantart user) who gave him to me along with his amazing backstory!
As said in the title he is not the first version, unfortunately we both don’t really remember how to fully remake him but I do have his torso peice, I do hope to attmept to remake the previous versions with my friend. Many parts from the older versions were passed on in each version interestingly enough.
I am actually really happy with how the pic came out truthfully, don’t do many like this. 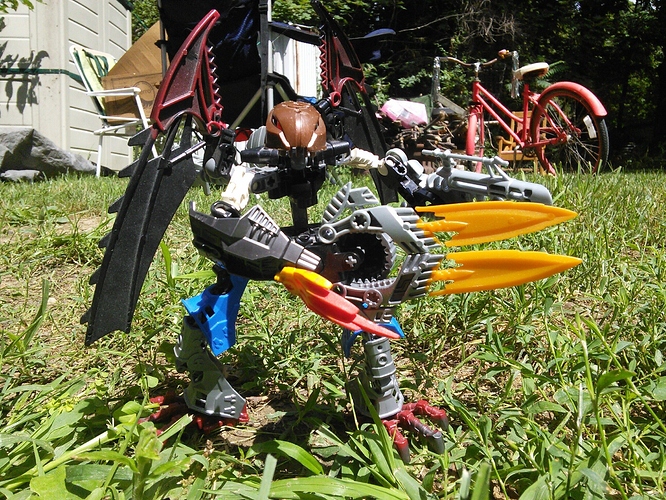 The logs I pulled up on this one are ancient. Like, really ancient. Something about it caught my eye, so I thought I’d post some excerpts here. (Also attached photos of the 3D recreation, although they were pretty low res. Guess that’s old tech for you.)

Following the discovery of a historic battlefield at the base of Mount K3, the fossilized remains of a large, heavily armored biomechanical specimen similar to that of M-Class Bios was found embedded in volcanic rock, approximately a kilometer above the mountain base, at 23:04 NGT.
[Coordinates attached]

The height and weight of the specimen are indeterminate, as the legs and lower torso have sustained immense deterioration. Estimations range from 10’3 to 11’9, at approximately 1.3 tonne(s).

The specimen appears to have been composed of several variant metals, including vibranium, titanium alloy, iron, and copper. Traces of graphene were found inside the “head”, alongside the apparent remains of a fully organic “worm-like” organism.

The similarities between the specimen and M-Class Bios appear in the design of the “head” structure, as it is similar to that of the “Rahkshi”, as it is portrayed in ancient Matoran mythology.

The deterioration of the legs and lower torso appears to have been caused by an unknown type of concentrated energy, as opposed to molten lava as previously assumed. Dr. ██████ notated frayed edges around the front of the upper thighs and lower torso armor plating, likely caused by the source of the residual energy.

Nearly every piece of armor plating appears to be comprised of a varying type of metal, suggesting the specimen frequently underwent augmentation. A relative dating analysis revealed the “head” and spinal structure to be the oldest parts used by the specimen. Dr. ██████ proposed the parts were native to the specimen’s original body. Further evidence of this was found inside the “head”, as the organism discovered inside had been fused with the neck and spinal structure, suggesting the organism had utilized the biomechanical body as a “host” body, and that heavy augmentations were made to the original host body much later after it’s creation.

Such notable augmentations include:

The log goes on to say that it proved the existence of the “Rahkshi”, because it apparently was one at some point. Up until then, the only physical evidence of their existence was in ancient texts and drawings, because the “Toa” killed them all off. What I’m wondering is, how did this one survive?

A theory I’ve been toying with is it managed to gain some kind of intelligence, enough to distinguish right from wrong. Enough to defect from Teridax’s army, and side with the Matoran. And, of course, arm itself to the teeth along the way.

It may sound far-fetched. Believe me, I tried really hard to debunk it myself, but if it were one of Teridax’s own, it just wouldn’t add-up. The date the battle supposedly took place was several centuries after the Rahkshi were abolished. If there was even a moderate Rahkshi presence in the battle, bodies would have been found. Of course, there were none. Although, how exactly a beast known for its heartlessness and animalistic brutality gained sentience and managed to outlive its life expectancy by over two hundred years, beats me.

I do have one last piece of evidence to support my claims, though. The logs reported finding a very specific Matoran sigil on one of the thing’s armor plates. It translated to “pathfinder.” The pathfinder sigil was something usually given to war heroes who specifically weren’t Toa — for those of you who’ve never attended a history class, ever.

Maybe I’m thinking about this too hard. I always did have an absurd obsession for ancient history, and especially for mysteries like this one. Just another one of my flaws, I guess.

In the end, no one will ever know what this thing was like, what it did, or the story behind it. It’s a bit saddening, for something so unique for its time.

The MOC itself is rather lackluster and quite a mess. The build is average at best and the torso, being a Vahki torso, makes his abdomen a stick.

However, the SCP Entry-style backstory is a large saving grace to this MOC, definitely unique and original.

@Yveran I didn’t make him and some of the older builds looked better, but this is good considering the sheer lack of parts he’s ever owned.
Also that mask has been on every single version of him.