Another vector drawing I made for my new MOC. 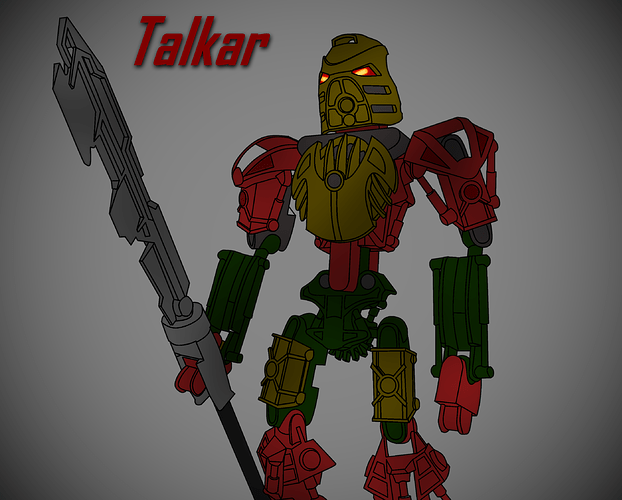 His biography:
Like Tilar, Talkar is the creation of Makuta Nerox. Nerox wanted to create new elements that were basically Rahkshi powers. Tilar fled the lab, but Talkar remained. After the Great Battle, Talkar left with Makuta Nerox and Makuta Silast. He was then hit by a lightning, transforming him into a Toa. The Makuta were satisfied with the result of him becoming a Toa. They needed him because they already knew that the return of a new Teridax was imminent. But they soon realized, that their creation needed a team to defeat Teridax. The Makuta let him join the Prime Squad, and he acts now as an intermediary between Toa and Makuta. His “element” grants him a great power of destruction. That’s why he is observed everyday by his fellow teammates. He is usually a joyful Toa, but he can also become very grim.

My decision to use a Rahkshi power again was difficult, because there were many which could have been interesting. But I decided to give him the Fragmentation as element. The story with the two Makuta being Tilar(another MOC) and Talkar’s creators makes it understandable, why they are so special.
Anyway, if you want to know more about my other MOC and my stories, you can visit my blog http://magnastories.blogspot.com

Nah jokes aside that is some great vector art, diggin’ the colors and shading

That drawing is pretty neat. The greys kinda blend in the background though, try using a different shade

He was then hit by a lightning, transforming him into a Toa

Pretty good linework, it’s very dark. Maybe you could brighten up the background/colors?

Pretty good linework, it’s very dark. Maybe you could brighten up the background/colors?

That drawing is pretty neat. The greys kinda blend in the background though, try using a different shade

Done. I was first not sure if I should change it or not, thanks for your opinion.

H-how does that work…

Ask Greg, he is the one implementing bizarre stuff sometimes. But since the MU is “dead”, a way to become Toa was to get some sort of stones which have been filled with another Toa’s energy(like with the Toa Metru). And another way would be getting hit by that Red Star lightning…I guess it works in strange ways.

FTFY
His should look a bit strange since they’re trying to face the camera.

I think it needed a bit more to differentiate itself from Toa Lhikan, but it kind of works with the chest piece and different weapon. Nice drawing regardless :3

The drawing looks great. However, as Scar said, he looks really similar to Toa Lhikan

Well, that was a bit my plan, since he was a great childhood hero(even if Vakama is the MVP)

He is usually a joyful Toa,

Those colors don’t lie. He’s actually the Toa of Christmas.