Hey, everyone! This is one of my projects from a few months ago. This was actually my first MOC built with CCBS parts, and one of my few attempts at building Rahi. It is kind of bare bones. It isn’t perfect, since I was getting the hang of the system, but I think it is pretty good (at least compared to some of my earlier projects…) Anyways, here is the Tarakona. 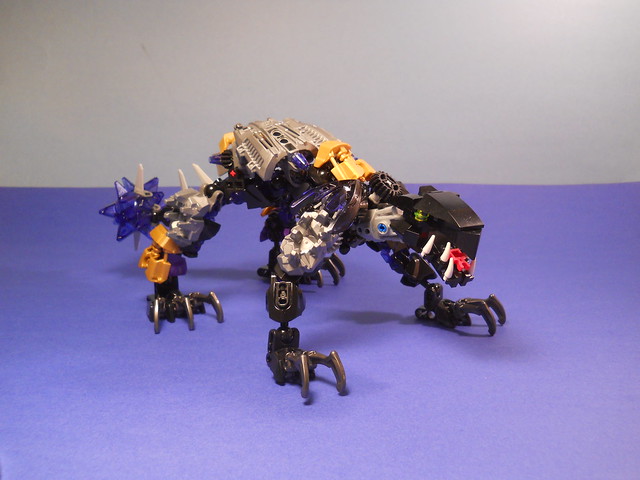 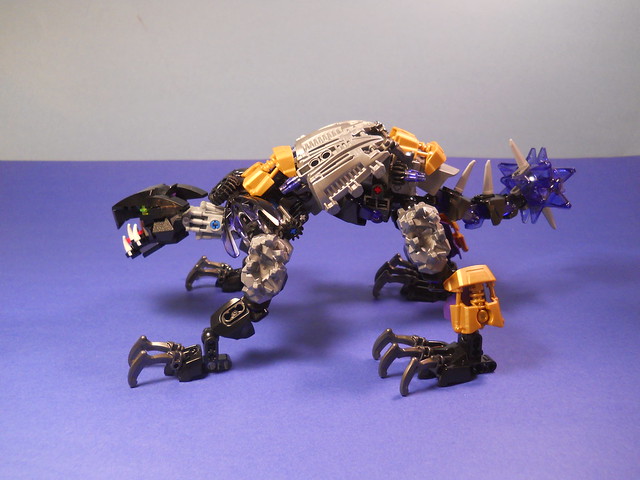 So, as you can see, the Tarakona is a sort of lizard/dinosaur/thing. Its four legged stance was inspired by the few moments from Jurassic World when the I. Rex was on all fours. I wanted to give it a heavy, armored aesthetic and a menacing stance as well. Now, on to the functions! 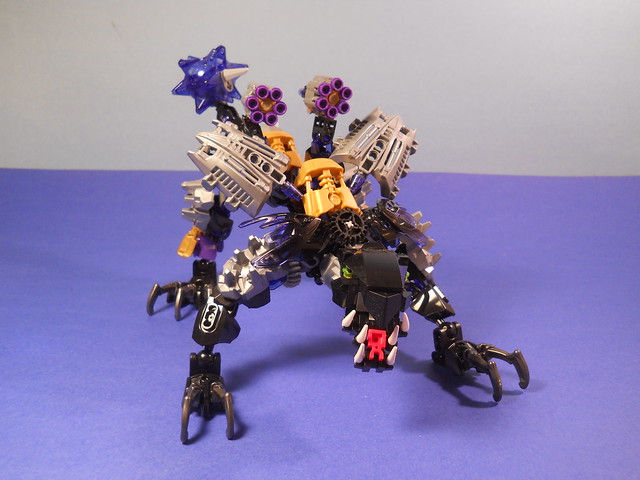 The first notable feature is the stud shooters. The shooters are hidden beneath the Tarakona’s shell, but can be revealed by opening the shell. The second and third features are the rearing function and the gearbox. The Tarakona alter its stance from a four-legged posture to a bipedal posture. It also has a gearbox to swing its front claws.

Some info: One of Okoto’s rarest and most feared animals, the Tarakona dwells in the dark caves and expansive obsidian fields of the Region of Earth. Tarakona are rather slow, but they are incredibly strong, able to break apart boulders with their forelegs and to smash stone with their spiked tails. Normally crawling on four legs, the Tarakona can rear up on their hind legs when threatened. Tarakona hide is as tough as iron. Hidden beneath their wings (which cannot be used for flight) are crystal shooters which launch crystals that naturally form when Tarakona feed. Tarakona are typically rather quiet and docile, but if they are threatened they become extremely hostile. Shortly after his arrival, Onua wrestled an angered Tarakona which was on a rampage in a mining outpost. He and the villagers were barely able to defeat the monster (just for perspective). 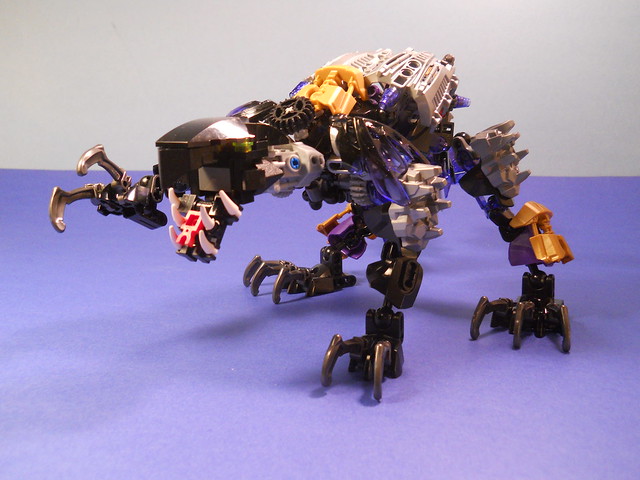 So, that is the Tarakona. If any of you are curious about how it is built or how its CCBS skeleton looks, check out the full album here: https://flic.kr/s/aHskgTvLp7
As always, comments, suggestions, and advice for improvement are appreciated. Thanks!

dude this is so cool
I like the tail

Speaking of the tail, it reminds me of an Ankylosaurus.

PURPLE! Nay, not just that!

PURPLE GUNS! Nevermind, that doesn’t have the same ring to it.

It may be mostly plain CCBS, but it’s still better than my Skull Goliath.

My thoughts have already been stated!
I also like the head!

I like this, really reminds me of an Ankylosaurus.

Nice work on that head.

I really like the design of this guy. The only thing that is not my favorite is the waist in bipedal mode.

the colors on this, man this great, the head is awesome

This looks great! Favorite section would have to be the armored shell and the head. I think you should bulk the stomach a bit, but otherwise fantastic MOC!

I really like this MOC. The “crystal shooters under the wings” function is really cool. The spiked tail is very creative, and also is the head. But I feel that the colour scheme is rather busy. I’m gonna give this a 7/10. Good job!

Speaking of the tail, it reminds me of an Ankylosaurus.

I like this, really reminds me of an Ankylosaurus.

I forgot to mention that that was also a source of information as well. I had no idea what it was called. You both hit the nail on the head.

Finding a Maori name for this guy was tricky. They all sounded weird, besides this one. I apologize for beating you to the punch.

The only thing that is not my favorite is the waist in bipedal mode.

I think you should bulk the stomach a bit, but otherwise fantastic MOC!

I would have liked to cover that up, but I ran out of CCBS parts and other alternatives resulted in hindered articulation. I agree that it could be better.

But I feel that the colour scheme is rather busy

This definitely has more colors than I would normally include. I was drawing most of the pieces from Onua and Protector of Earth sets, so that did limit my access silver parts instead of gold ones.

Thank you all for your comments!